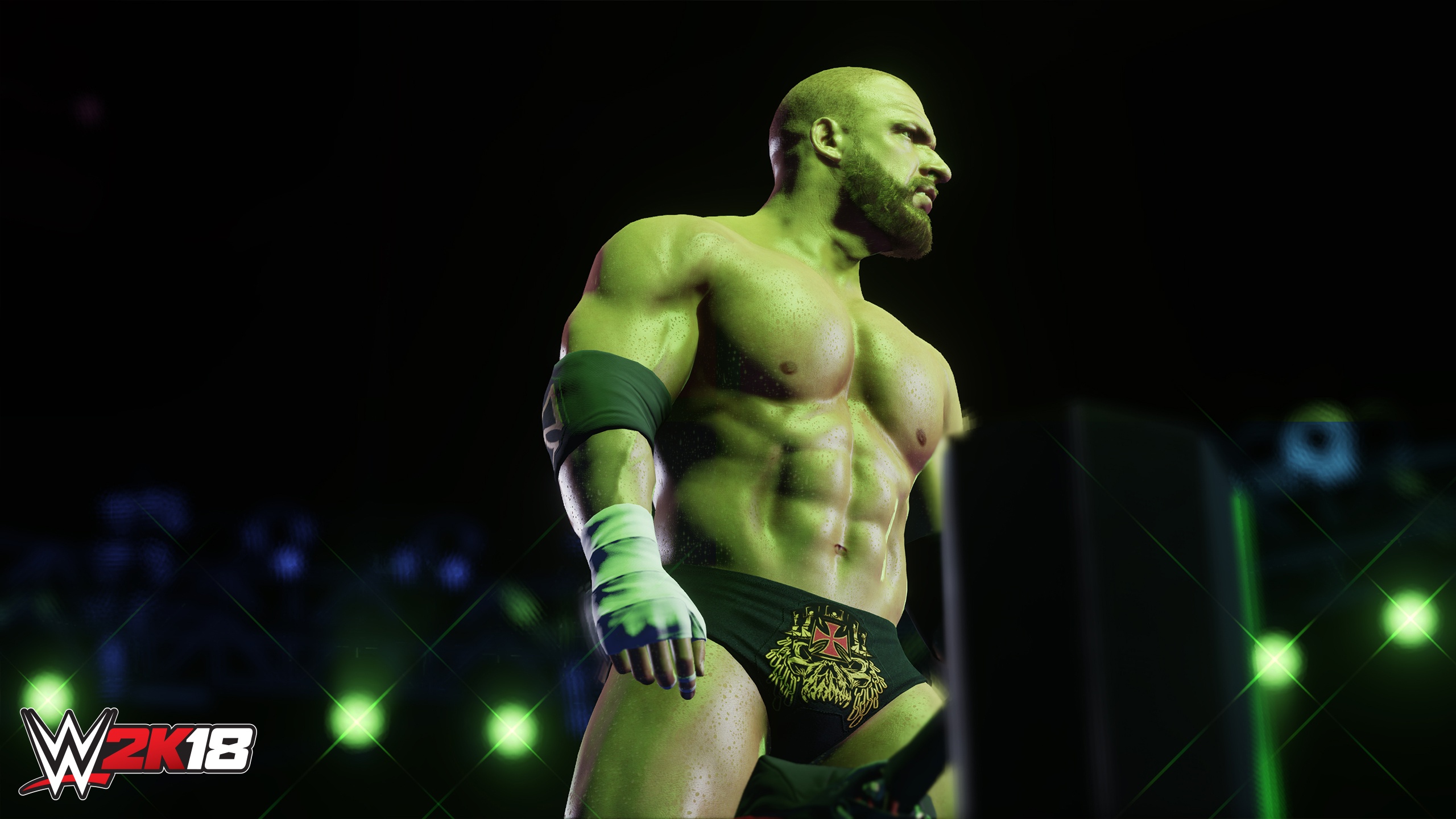 WWE 2K18 is the latest iteration of the WWE franchise from 2K Sports. Being developed in collaboration between Yuke’s and Visual Concepts we are treated with some great visuals, but some frustrations at the same time. Let’s take a look at how the game stands up in a market where it has no competition.

Controlling your wrestler in WWE 2K18 is straight forward, left stick to move, left stick in combination with a specific button to carry out grabs and strikes. It starts getting a bit confusing when you are trying to perform a specific move, say for example picking an opponent off the mat when you have downed them. This became my first frustration, each button has a number of actions assigned to them depending on the type of button press you carry out. Example in point, the Circle button. This carried out the pin action, however, if you double press – which I stumbled upon – this carried out the pick up opponent. The number of times I knocked someone to the ground with a dropkick, only to instantly pin them rather than pick them up. Eventually getting the hang of this action and I was picking people up and continuing the damage.

Moving around the ring can be smooth and silky and at other times it can be jagged and jumpy. Although WWE games have always suffered from this, it does seem to be less apparent in WWE 2K18 and as such your characters do feel weighty and each move definitely has a feeling of impact even if during some actions your characters suddenly jump into a pre-determined sequence.

Moving over to the game modes, well as usual there are loads. Literally loads! You have MyCareer which takes you through creating your character and moulding his life through the WWE universe. Online, where you can take any of the wrestlers available, of which there are quite a few, and head out into the big bad world and fight against someone from the other side of the world. You even have the ability to create your own Pay Per View event and set your own match ups. Outside of that you have all the editing you could wish for, edit tag teams, edit characters, edit championships. We could literally spend all day writing about the modes, but I feel the best way to experience the game is just to get into the ring and fight.

The only down point during the MyCareer that I have encountered is the load times. Well not necessarily the times, but the frequency. When you start your journey in WWE 2K18 you are dropped backstage and told to go and find Albert, you head towards him and find him. You start a conversation where you pick from different options for your responses and they are told to head into the ring, LOADING. Once you have had your first taste of the action you are put back out talking to Albert, LOADING. After you finish the conversation with him that lasts about 10-15 seconds depending if you skip through and how fast you read you are put back in control, LOADING. It can all get a bit frustrating and at times prevents you getting more immersed in the game.

As previous mentioned there is a large number of wrestlers in the game, and they range from the obscure to the classics. Although they are not unlocked from the beginning, you earn in game points that you have to spend on unlocking wrestlers. So who do we have? I hear you ask, well from recent years you have all the people you would imagine, John Cena, No Way Jose, Kassius Ohno, and many more. To wrestlers from years past including five different versions of Sting, three versions of Triple H and other fan favourites such as Big Boss Man, British Bulldog, Macho Man Randy Savage and The Ultimate Warrior to name a few. In total with all pre-order bonuses and DLC wrestlers there will be 220, yes 220 wrestlers for you to take control of in the squared circle.

In addition to the number of wrestlers available you also have a Create-A-Wrestler area where you can create your own monstrosity and upload it to the world wide web. You can even go and check out other peoples creations, although they aren’t all freely available to download. If, for example, you wanted to download the brilliantly recreated versions of Animal and Hawk from the Legion Of Doom you will have to already be in ownership of the WWE 2K18 Kurt Angle pack. Alternatively you might be required to unlock a certain wrestler from the current roster to allow use of some attributes that he/she uses. In some ways its good because it acts like a card collection where you are always aiming to get the whole set, but on the other hand unless you purchase all the extra DLC packs, you might never get to download Hulk Hogan from the WCW era.

The majority of the time the graphics are absolutely brilliant. The character models are life like and the physical attributes are generally spot on. However, it seems that more emphasis has been put on the in ring action and when you venture back stage you are greeted with rough looking textures on the walls. there are a few characters you meet where they just look sweaty all the time. Back to the ring and its all beautiful once again. From the particle effects during the introductions to the presentation at each of the big events, all comes together to form a great spectacle for anyone playing and even watching the game.

Now moving on to one of the points where I find the game lets itself down so bad…whilst the game has all the likeness’ of the wrestlers and all the ring walks the one thing that the game is missing is speech. You go and talk to someone for the first time and you expect to hear a bit of their speech, but nope. You are left to read subtitles like you are playing on a SEGA Mega Drive. In this day and age when the game is so heavily focused on being as authentic as possible, you seriously can’t accept that having subtitles to read rather than listening to a few lines of dialogue is the way forward.

Aside from that massive omission, the game sounds are OK, the thuds and slaps of the fight are all accurately depicted whereas the commentary is so broken sometimes its funny. It’s generally good though and you get a nice run down of the action going on on-screen, just in case you weren’t sure what you were doing. Music is a good mixture of heavy rock and hip hop, just what you would find yourself listening too if you were at a WWE event, just without all the sweat hitting you in the face.

For all die hard WWE fans I can imagine that WWE 2K18 is brilliant, with all your favourite superstars on the roster you could spend a whole year playing as each character, which I’m guessing is 2K Sports idea. With all the game modes available you can find anything for any situation. Got some friends around, then take on a Royal Rumble and see who can last the longest. Alternatively have a Fatal 4-Way Hardcore match and see who can cause the most bodily harm. If you are on your own, then spend some time creating your wrestler and taking them through a career and see how high you can move up the ladder.

All in all, WWE 2K18 is a fun game to play, if you aren’t aware of the WWE universe then you probably won’t enjoy this. However, being a fan of the sport since childhood it was refreshing to play a new iteration of the 2K Sports series. WWE 2K18 bodyslams that Thumb Culture Silver Award.