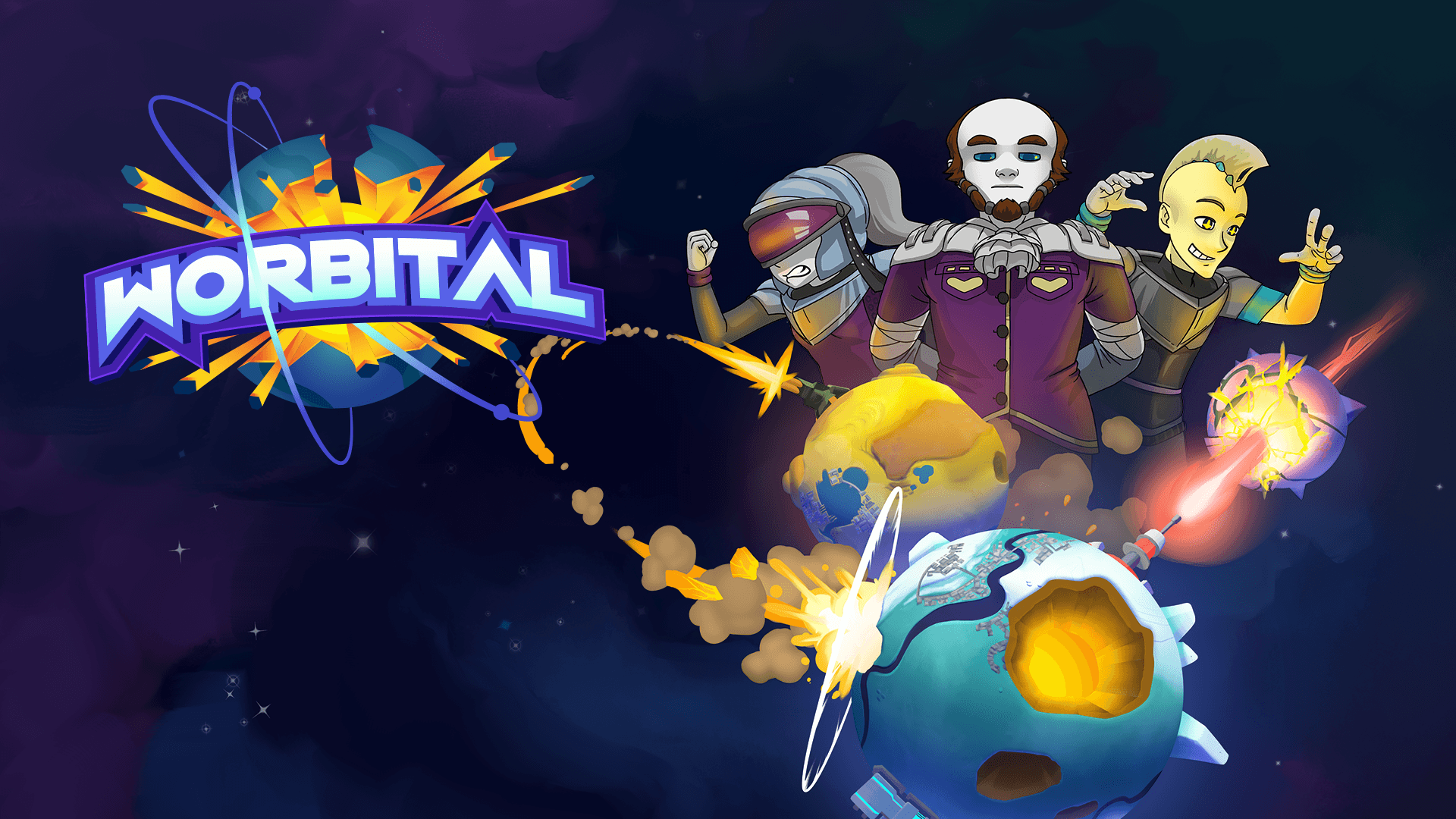 Worbital, developed by Team Jolly Rodger and published by Advanced Interactive Gaming is a real-time strategic artillery game set in space where you must build a whole host of weapon and defense platforms on your orbiting planet while trying to blow up the enemy ones!

Out now across all consoles and PC, was I going to find Worbital out of this world or a failed launch?

Worbital, from the game title I was left to think that this game would be something to do war and orbiting, I was happy when I got it right!

The basis of this game is a simple one however when it comes to strategy and timing, you will really need to keep your wits about you amongst the chaos!  Reveal the core of the enemy planet and blow it up!

There is a campaign mode that lets you play through a story as to why the interplanetary battles have kicked off, basically, a quest for resources as yours are drying up and this then turns nasty when factions are formed, namely; Terrene, Lucid & Celestial, and it all becomes a bit of a free for all.

The campaign is a great place to start off learning about how to build up your planet weapons and defenses however after the prologue you are very much thrown into the deep end as you face your first real battle against another faction and their planet.

The gameplay of Worbital involves you building on your planet which has been divided into segments.  There is a choice of tier one, two and three weapons and defenses however they unlock as you progress through the battle.  You can choose to build refineries in order to increase your cash flow which will then allow you to build basic weapons such as the rail gun and magnet gun which can then be used to attack the other orbiting rocks and planets or perhaps you need to repair, upgrade or even sell a structure.  Whatever it is, do it quickly!

To attack you simply select a segment on your planet that has a weapon and then use the thumbstick to aim the trajectory of the artillery.  The path that it will follow is affected by the gravitational pulls of the surrounding objects which can either lend themselves towards a fantastically well engineered shot or a total miss as you then have to wait for your weapon to recharge, leaving you as a sitting duck while other enemy planets take shots at you.  It is pure cosmic chaos during the battles as you strategically build defences and weapons to fill the segments while ensuring that you deal efficient damage at others and avoid any meandering rocks that may be in your orbital path.  Having to plan your attacks based on the rotation of your planet is genius ensuring that weapons such as the high damaging laser, for example, can only be used occasionally when your planet lines up perfectly with the enemies.  Other weapons such as the homing missile and the nuclear bomb are controllable when fired, leaving you to determine when to steer your menacing object while taking into account the way that the thrust and gravitational pull will affect it.

If deploying artillery isn’t your thing then there is an awesome world rammer that you can build that simply lets you blast your planet from its orbital course in order to collide with the enemy planet, it does however deal you some damage too.

There is of course an upgrade mechanic to Worbital, enabling you to not only strengthen your weapons and defences during the game but also allowing you to create your perfect loadout of tier 1, 2 & 3 buildings.  The latter are paid for by dark matter, a currency that you collect by destroying everything around you during battles!

Once you have understood the basics of Worbital and have got used to using a strategy then you can challenge others via the online part of the game.  Seriously I got annihilated, I was only just about defeating the AI through the faction story mode let alone be let loose with a bunch of people who seemed to relentlessly attack, repair and defend a lot better than me!

Worbital looks great on the PS4 Pro with a clear easy to read Hud and fantastic levels of detail when you zoom in and out of the gameplay.  With the amount of things going on during the battles such as rotating and orbiting planets, space rocks, artillery fire and of course, you trying to wildly line up a twisting and turning trajectory line to fire a weapon, the game runs very smoothly without any frame drops or lag.  The characters in the factions are all drawn neatly in a uniquely artistic way, lending themselves to the story as they appear in a comic book style across the bottom of the screen.

Worbital, features an awesome intergalactic inspired theme tune that would make even the electronic music legend Jean Michelle Jarre grin.  Keyboard synths, Destiny style horns and the pitter-patter of 80s snare drum fades all come together to help put you into that military conquest mood.  Sound effects are crisp once playing the game with the sounds of lasers, missiles and construction helping you become aware of what is going on and more importantly what is about to hit you!

Worbital, as you can see from our Stu vs Stu youtube episode, is a lot of fun when played against known opponents via the online mode.  Games can take a while depending on each other’s skills and ability when it comes to attack and defence.  The offline campaign mode offers a story to play along to as well as give you an understanding about the various factions.  This is also a great way to understand the game!  If you want to play locally then you do have that game mode as well so there is a mode for all occasions.  With each battle lasting around 15 to 20 minutes, it depends how good you are as to whether you want to keep playing or not!

Worbital is a very strategic and fun game to play.  I did struggle at first and seemed to not be quick enough on the PS4 controller at selecting the correct section on my planet at the right moment, for example, lasers fire in a straight line so can only be used when the rotation of your planet lines up with the orbit of an enemy planet. Likewise the number of times I just got into a complete panic while missiles rained down on me from others and I was selecting the wrong areas of my planet as I had forgotten where I had built them.  It is all a learning curve.  For me, the fun of Worbital lies with the online mode and especially against friends, do you team up or do you just go free for all?

Worbital is a game like no other that I have played, I enjoy the thrill of a strategy and also love space so its a win for me!  I give Worbital the Thumb Culture Gold Award!