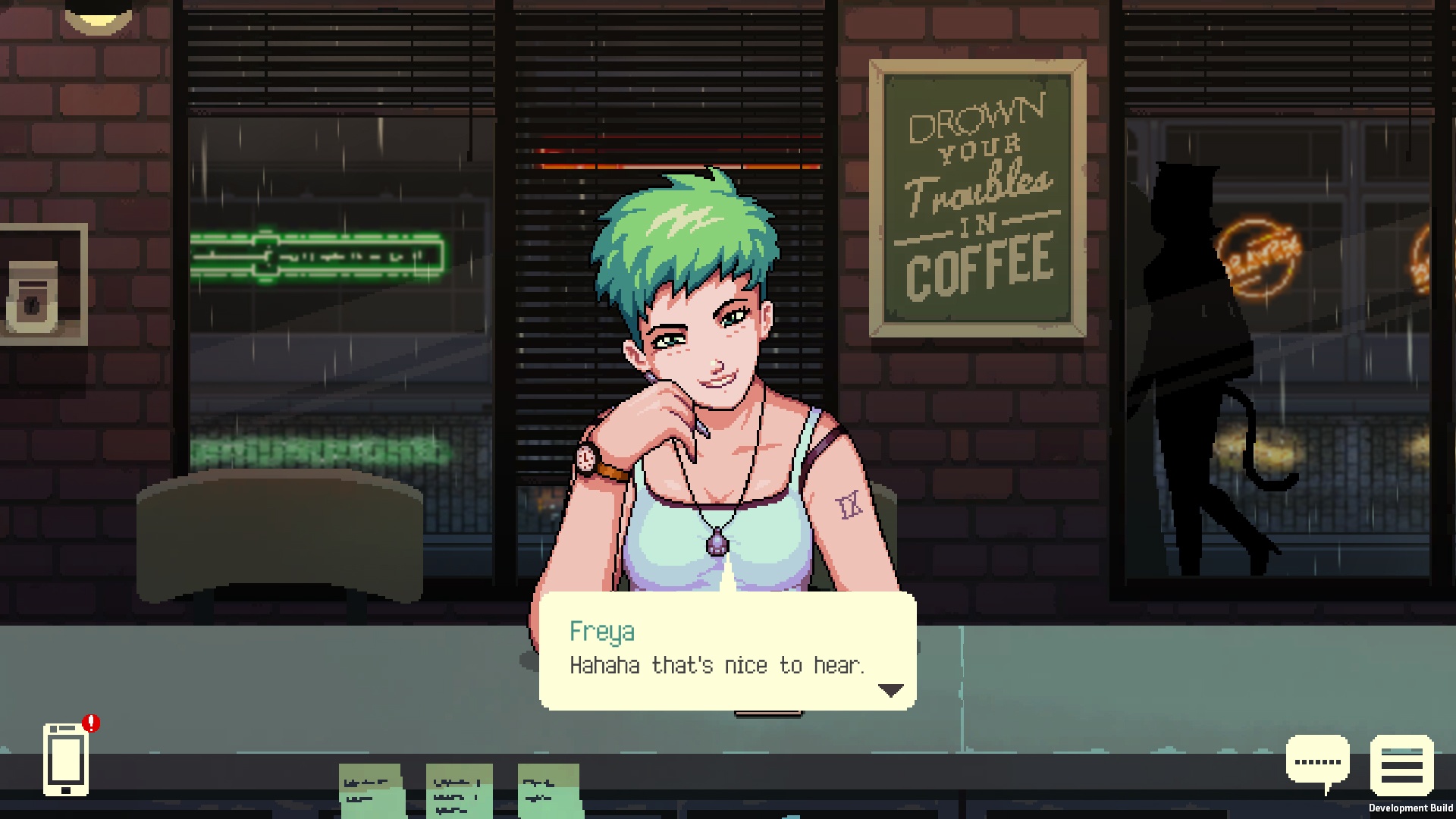 Are you ready for some hot, hot tea on Coffee Talk, the newly released indie game from Toge Productions? Well good, because you’ve come to the right place. Pull up a chair and allow me to pour you a hot cup of coffee, which I’ve got pretty good at over the last few hours of playing this game. 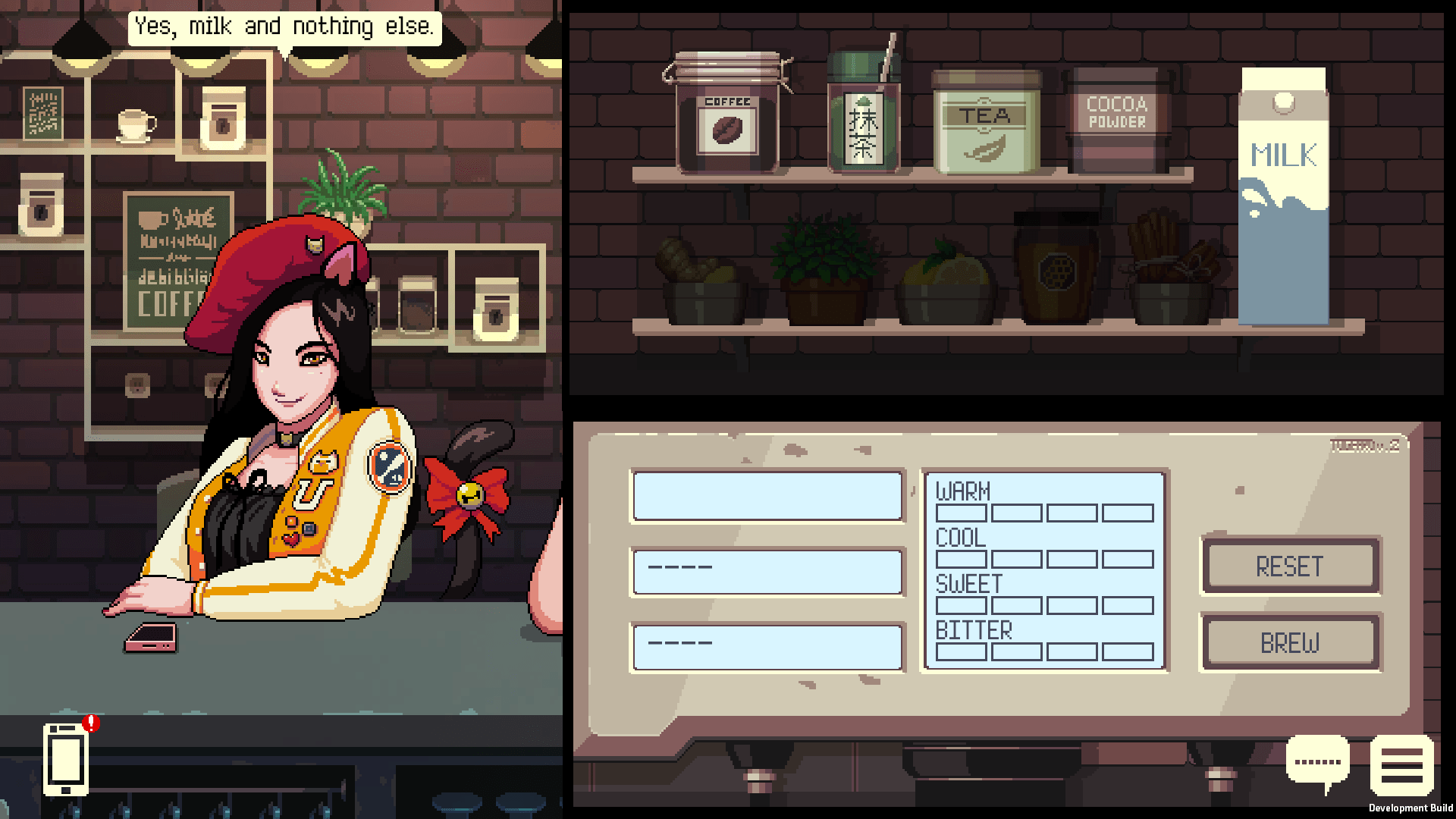 Available now on Xbox One, PS4, PC and Switch, Coffee Talk’s central premise of caffeinated chill is a fascinating concept, but one that might leave some gamers out in the cold.

The main theme of Coffee Talk is that of listening to the problems of others and trying to help them while you serve them warm drinks on a rainy night in Seattle. That’s kind of it. The cast of characters is rich and varied, and while the dialogue is perhaps a little stilted at times, their stories touch on some pretty heavy-duty themes. 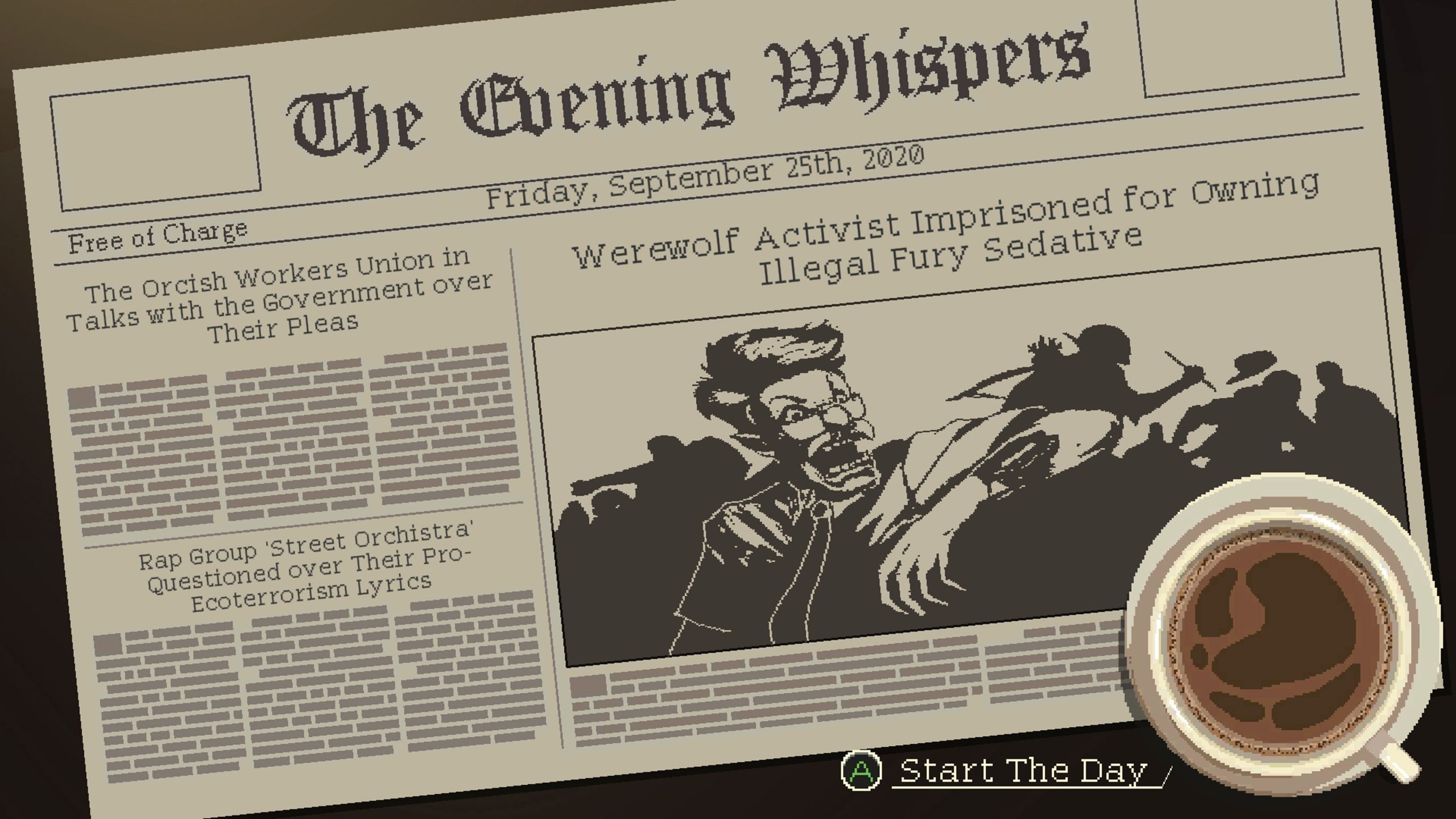 Your job as a barista is to listen to them and serve their coffee. You’re meant to help them with their problems, although you’re not actually given the option to make any dialogue choices.

The way you treat the customers (through serving coffee) is meant to affect their decisions, but you don’t actually have much control over that either. So what you end up doing is pressing A a lot, or just autoplaying the full scenario and watching what they discuss. 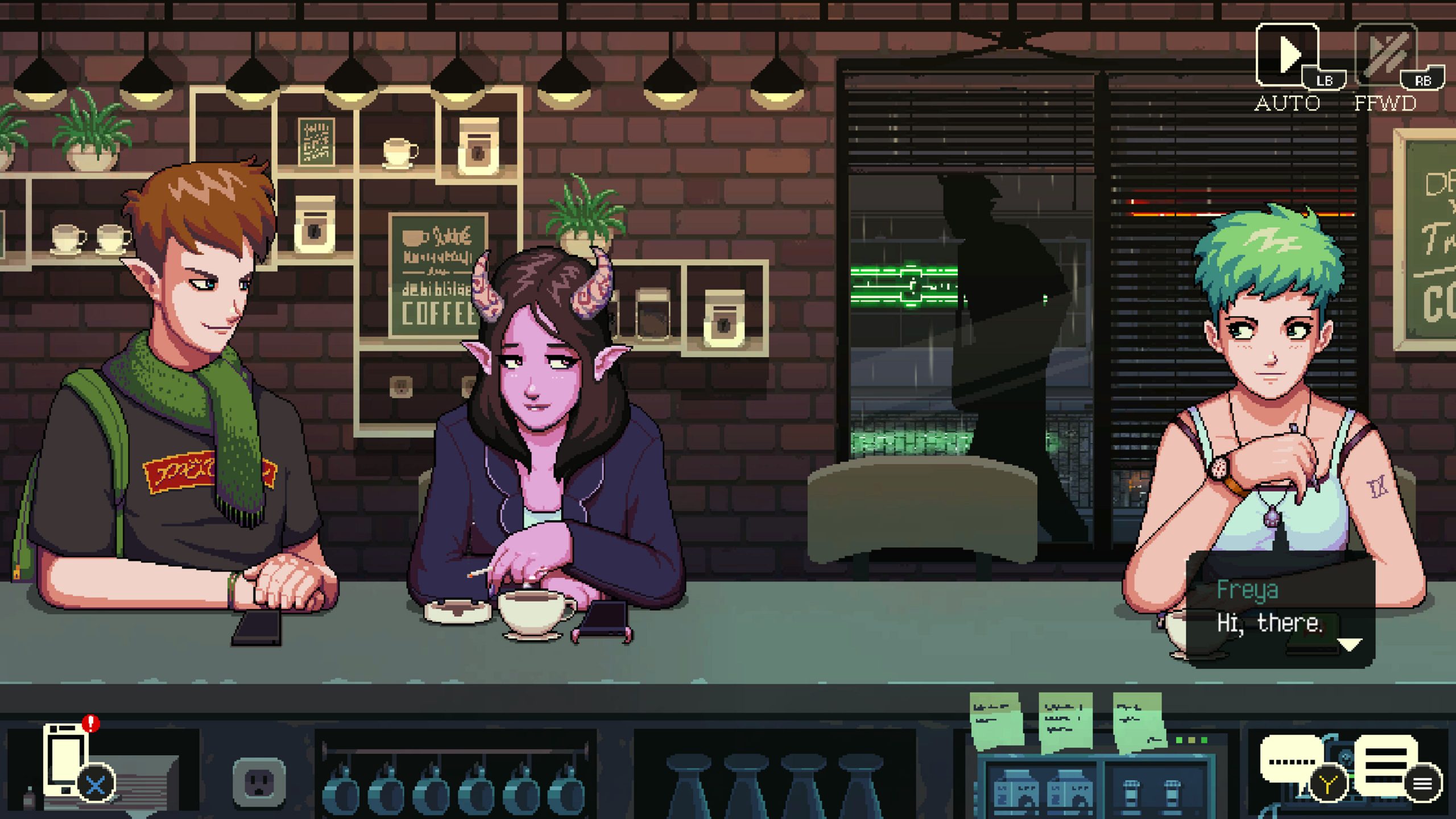 This, for me, is the single greatest shortcoming in this game. I don’t want to be too negative about it, because everyone’s gaming style is different, and some people will love the game for what it is. However, there’s not a great deal of interactivity in Coffee Talk, aside from the times you actually make the different drinks for your customers.

Aesthetically, Coffee Talk is pixel-rich and deeply reminiscent of the early 90’s-era anime and pixel art style of gaming. It’s pretty retro whilst remaining pretty, which is no mean feat in my eyes. Colours, textures and graphic elements fit nicely together to create a relaxing vibe throughout the coffee shop scenario, and the game itself ran smoothly on my Xbox One with no framerate issues or glitches. Such smooth visuals and an easy on the eye aesthetic provided a rich and rewarding viewing experience, which admittedly, is kind of all I felt I was doing after a while.

One of Coffee Talk’s strengths has to be the soundtrack. Inspired by lo-fi beats and chilled hip-hop, background music is relaxing without becoming repetitive. The kind of smooth jazz music you’d expect to hear in a boho bar in Ibiza, or indeed, a late-night coffee house.

Aside from the backing soundtrack, there are no other real audio effects to contend with other than the beeping of your coffee machine and the occasional pinging of your mobile phone. Coffee Talk feels designed to be a distraction-free experience, and to that effect, the audio really performs. 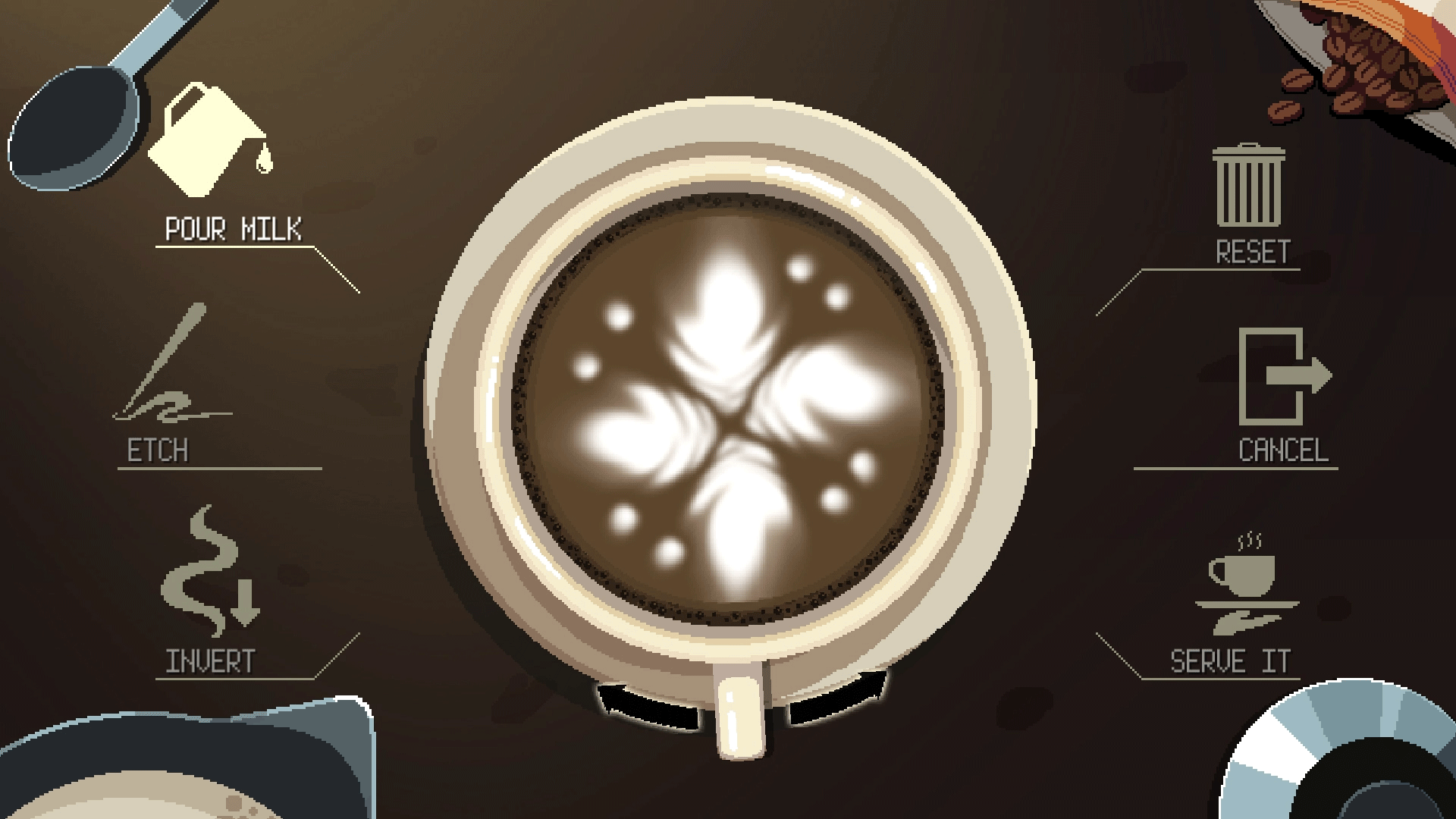 Coffee Talk is the kind of game you’d probably throw on when you’re in the mood to be entertained a bit but don’t actually want to do much yourself. For me, it sort of brings into question whether or not this fits the premise of being a game at all.

It’s more of a visual novel than a game you actually play, which is sure to tick a lot of buttons for some people, I’m just not sure how much it spoke to me. If you’re in the mood to be relaxed and not really do a lot, then Coffee Talk is the chill vibe for you.

However, it’s so chill, it’s practically tepid on the enjoyment front. I’m sure this is the kind of game that some will love because of the diverse cast of characters and their interesting stories, but personally I got bored very quickly because there just wasn’t very much for me to actually do.

I really wanted to like Coffee Talk. The premise is cool, the look is cool, the music and the vibe of the whole game is super cool. The problem is, it’s too cool to warm me up to it, because underneath the super slick style of this game, I didn’t find as much substance as I’d have liked.

Coffee Talk is a well made, story-rich game that some people will probably love, but personally, it just left me wanting a hot cup of tea and something to do. For that reason, I’m giving Coffee Talk a Thumb Culture Bronze Award.