Nippon Ichi Software bring us The Witch and the Hundred Knight 2, the sequel to this original release in 2013.  The big question is ‘Have they managed to sway the indifference that met the first release?’ Well I guess it’s time to polish my armour, after all, after 100 years it’s going to need a little TLC. 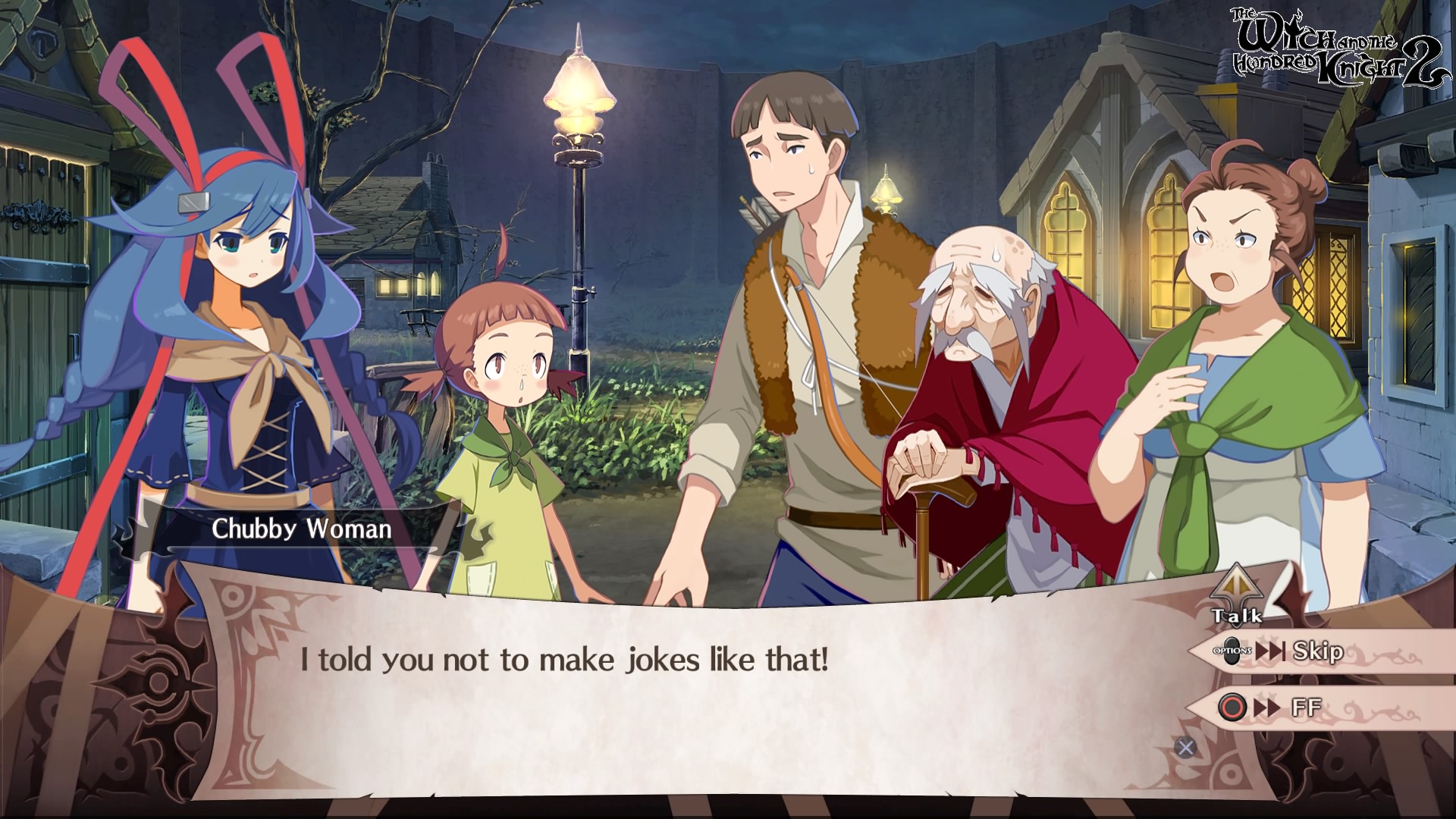 Yes, there are jokes. Some are even funny.

The Witch and the Hundred Knight 2 tells the story of 2 sisters, Amelie and Milm. Amelie is a headstrong young girl who wants to protect her younger sister, and Milm has been possessed by an evil witch called Ckelka. You get to be the Hundred Knight and kill lots of things for them both, well all three of them if you are going to be picky. The learning curve on this game is very shallow, and anyone who has read my previous reviews will know that I am now in my element. Move the sticks to move and aim in the tradition of a twin stick shooter. Arm yourself with weapons. Protect yourself with armour. Grab various things to eat to restore health and other vital stats. So far nothing is new.

Items are held in your stomach until the level is cleared, if you get defeated these items disappear. Might be a good idea to head home if you feel sick as well. You need to keep your gigacalories up as well, so keep an eye on these. Weapons not powerful enough? Upgrade them, simples. That’s everything you need to know to win, so easy days. Well I wish. Complacency will get you defeated, learn your moves, learn your enemies and use your knowledge and weapons wisely. Switch out weapons when you first spot the enemy to ensure you are using the best ones. 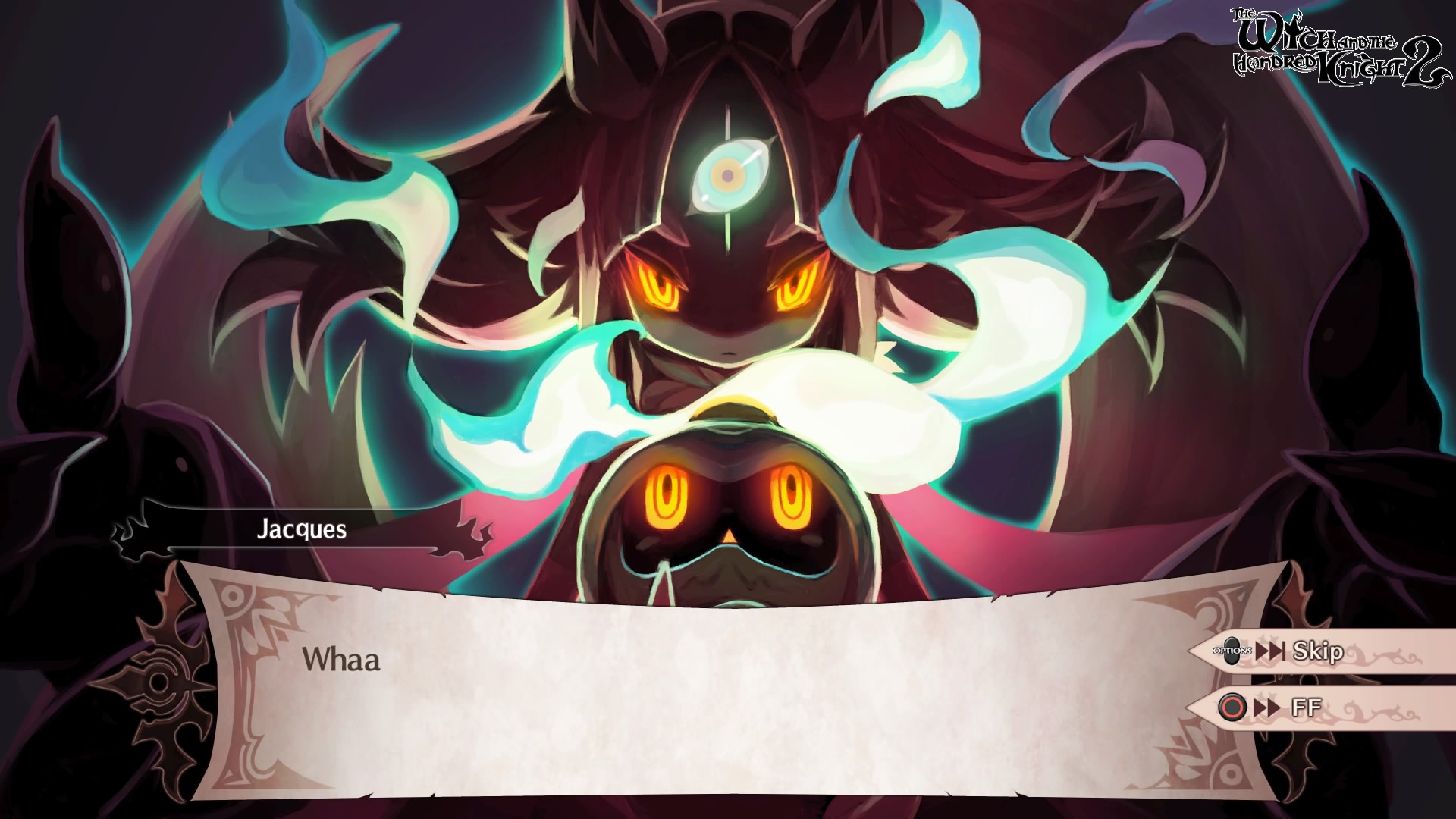 So how about the story? Is it engaging, will it hold the interest?

The story isn’t boring, yet it isn’t fascinating either, it just bobs along at a gentle pace. There is the usual eclectic mix of characters, there is some much needed good humour as well. Some cut scenes do go on for too long, but you can skip them, so if the story does get a bit boring for you, just stick to the combat. 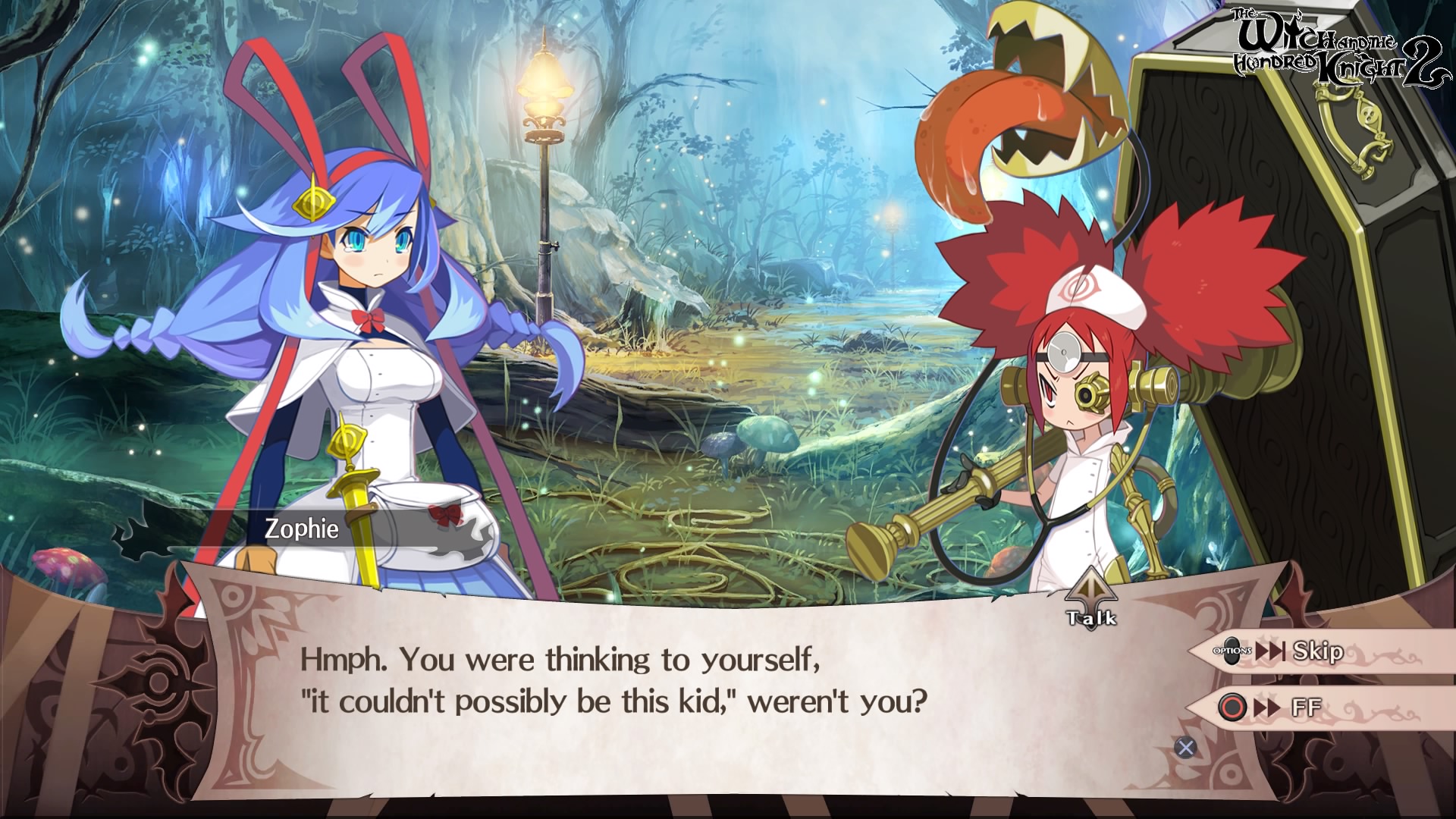 Did I enjoy The Witch and the Hundred Knight 2?

Well on paper it’s not looking good. Repetitive fighting, longwinded cut scenes, end of level bosses. The game offers nothing new, so initially it’s not grabbed my attention. However there is a curiosity in this game that seemed to keep my interest. I wanted to complete the next level, see what was going on with the sisters and the other witches, get more powerful weapons and abilities. Somehow I played this game a lot, it was almost like I had been possessed by a witch to keep playing it. The combat system does take a bit of getting used to, and mastery of it will definitely help. This is not something that comes quickly though. The levels are not too long, so you can easily dip in and out, or have a marathon session. 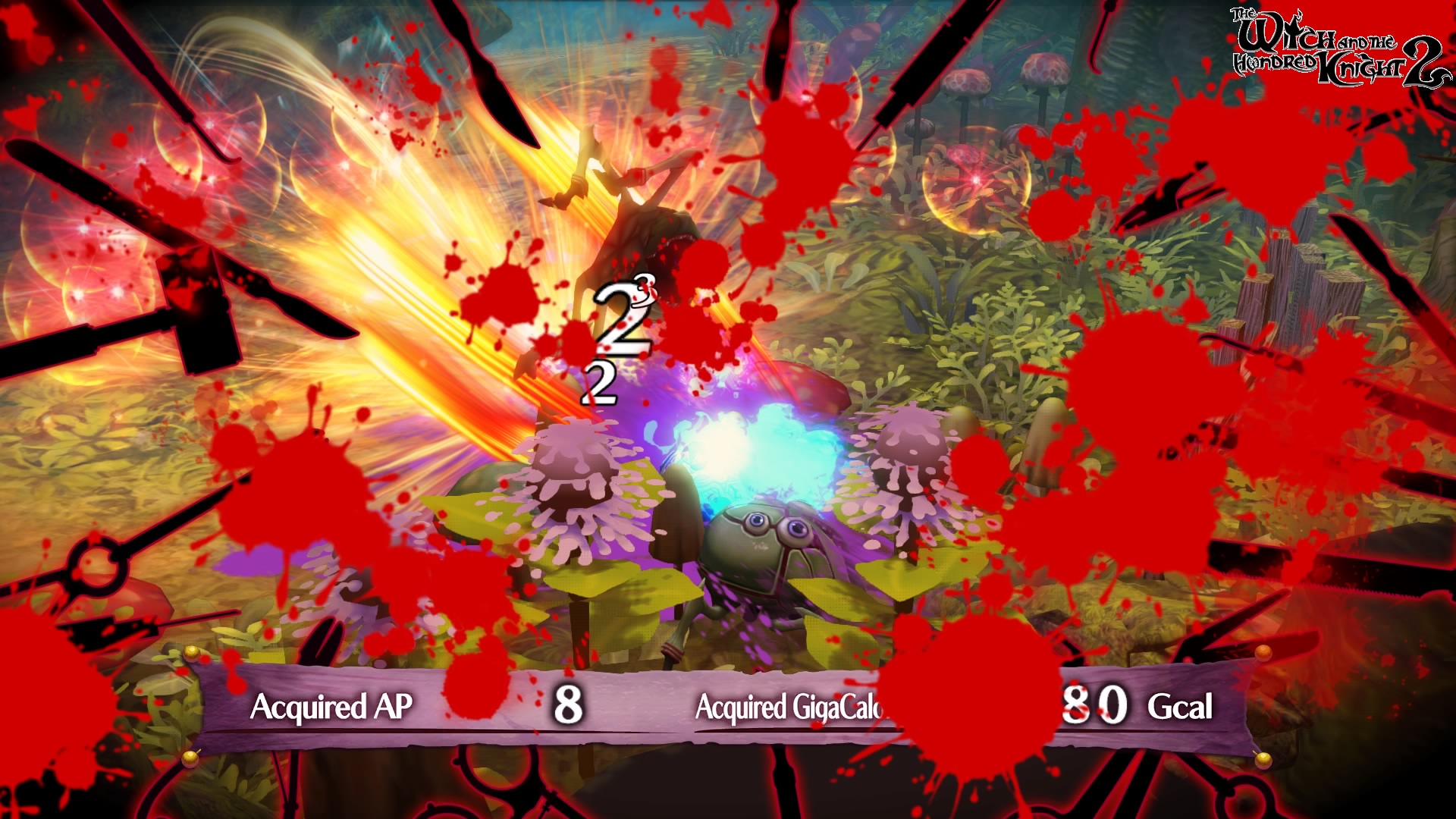 I think The Witch and the Hundred Knight 2 would have benefitted from a good 2 player system, maybe introduce the hundred Knight’s friend, the Two Hundred Knight? That would be awesome. Playing a game like this would be better shared. Switching weapons, healing each other and combo attacks would add an element to the gameplay.

Given the style of The Witch and the Hundred Knight 2 the graphics are good, you can see what things are and where you are going. One issue I had was that the screen can get a bit cluttered in combat and I would lose myself. The cut scenes match the style of the game, though for me that just lack a bit of variety. One weird things is everyone seems to be on a skateboard for some reason. These are things you get used to. 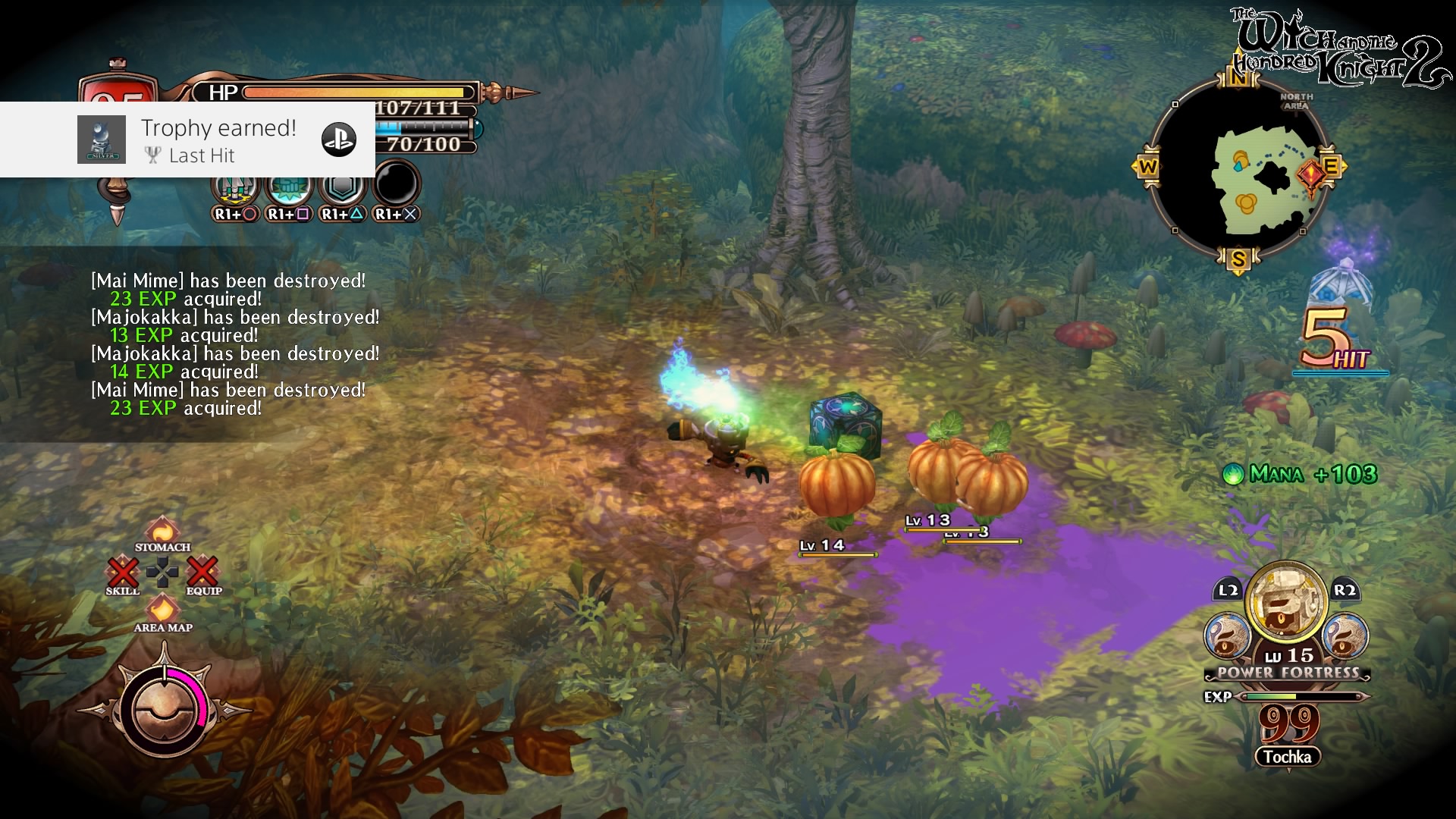 I think I have been nice so far. However! The voices used in The Witch and the Hundred Knight are not great, but they do grate. The overacting voices are amusing at first, but they get tiring very quick. The sound effects in the game are ok, and the obligatory combat noises are all there. The sword swooshes rather well. The background music can be a little annoying as well, it seems to be set too prominent in the mix of everything and it’s not the best. 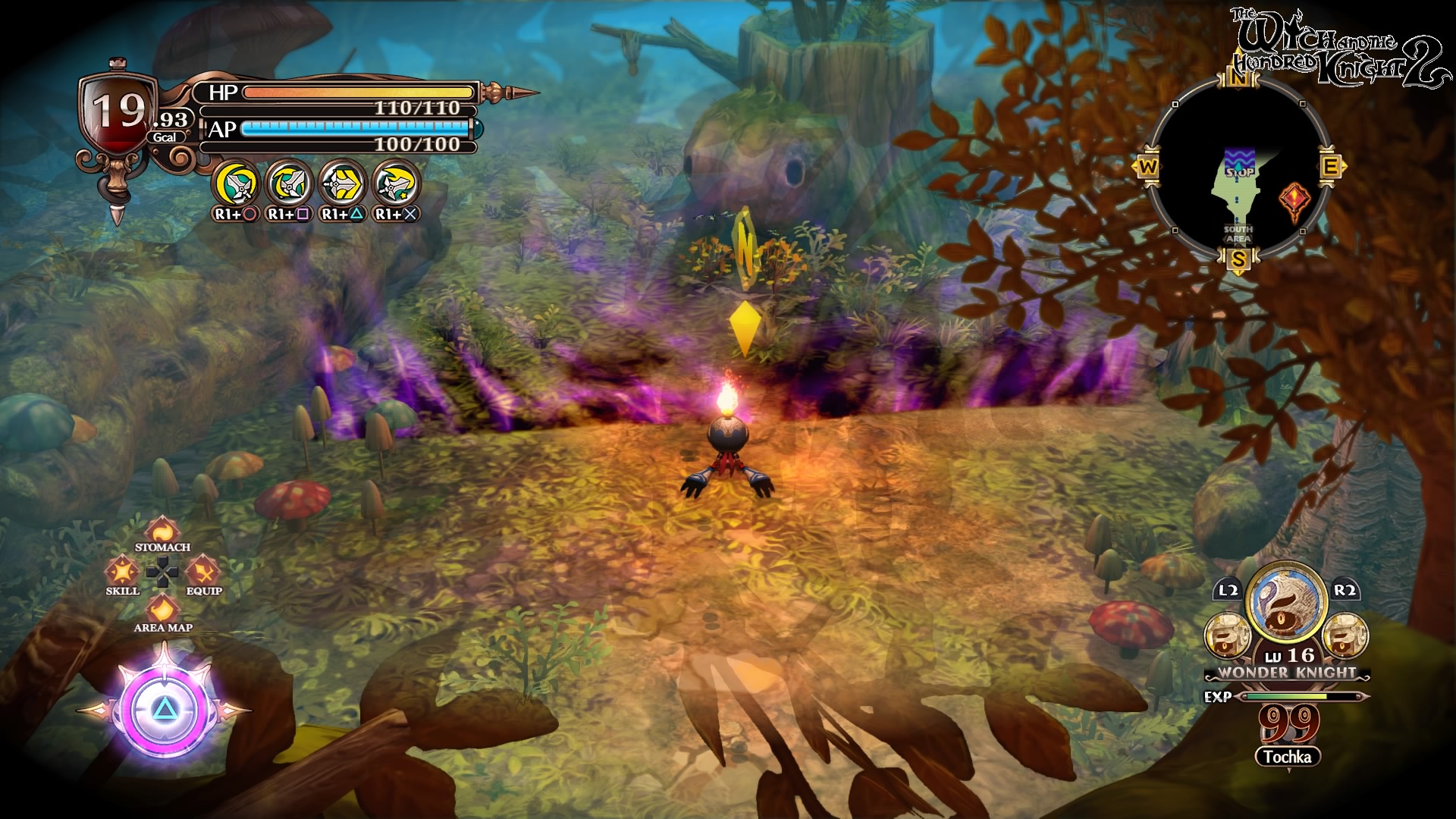 And now we’ve come, to the end of the road. (Not included on the soundtrack)

The Witch and the Hundred Knight 2 has a long way to go. The script writers need to be let loose to create a fully imaginative story that captures the attention. Nippon Ichi Software have just updated the original a little, but there has been no attempt to tear up the rule book. The original had mixed reviews and I suspect the sequel will be the same. The game is fun to play, so I think people will dip into it. I like this game and it will feature regularly in my evening entertainment schedule. 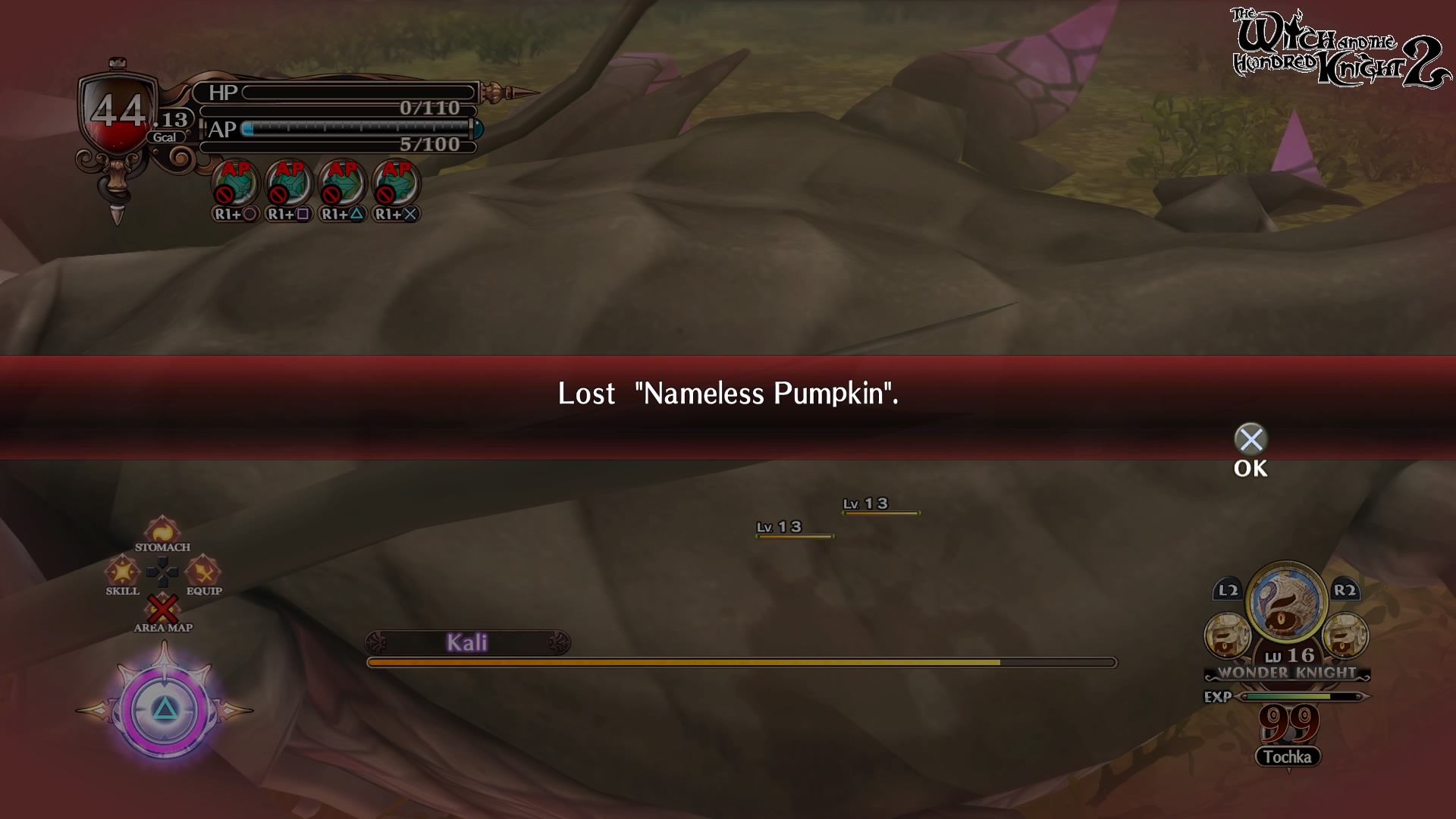 Yes, I’m under that thing somewhere.

I have awarded The Witch and the Hundred Knight 2 a Thumb Culture Silver Award.