This gritty and dark American Folklore tale is by Dim Bulb Games and Serenity Forge. It was also founded by Johnnemann Nordhagen, co-founder of Fullbright and programmer on Gone Home and BioShock 2. Where the Water Tastes Like Wine is a surreal, poetic journey through American legend and fantasy, featuring delicious art and toe tapping original folk music. It spans a century of US history in the depression era, introducing players to a vast cast of drifters, fortune tellers, and magical creatures – and there’s Sting, yes the musician Sting.

Having lived for a while in the south, I loved hearing all the old stories, getting lost in the music and visiting vast places of cultural interest on my journeys around Mississippi, Tennessee and New Orleans, but when I heard of a game that delved into the folklore side of American storytelling I just had to experience this exciting concept in gaming for myself. Where The Water Tastes Like Wine is a narrative game, uniquely structured as an anthology of short stories. Rather than relying on a single central narrative, each story contributes a piece to the game’s theme. There are sixteen stories in the game, and all of them are written by different people, some that include the brilliant works of Jolie Menzel, narrative designer for South Park: The Fractured But Whole, and Anne Toole, editor/localizer for The Witcher.

You begin your journey as a weary traveller who hears the sounds of laughter from a nearby house, intrigued and wanting to rest, you wander in and sit down for a game of cards chancing your luck – what have you got to lose after all? A shadowy figure, face coated black by the dim light, sits opposite you beside his giant stack of already won coins. The others eventually leave, having lost their pot – it’s just you and the mysterious man. Believing you have a good hand, you want to play but the man pushes all his money towards the middle of the table making you second guess yourself. You don’t have much money, it’s all you have, but the strange man has an idea and a deadly strategy that may just cost you your life. A match is lit and this confident stranger’s face is revealed – he isn’t a man after all but a dire wolf voiced by Sting himself.

Where The Water Tastes Like Wine takes you on a vast adventure across an expansive map of America where you can stop for a while at varies cities to look for work, eat, explore or hop a train ( if you have enough money ). Stroll the entire map soaking in the beautiful scenery and music or you can take the chance of stowing away on a train hoping you don’t get caught and even thumbing a lift. Whatever way you decide to take your voyage you will come across the most captivating characters with their own stories to tell which you collect and then retell to progress you further into the game. You’ll also come across extremely weird and scary people too, with stories that’ll make the hairs stand on your arms and witness strange entities while stopping at place marks – least said about the creature with wings the better! 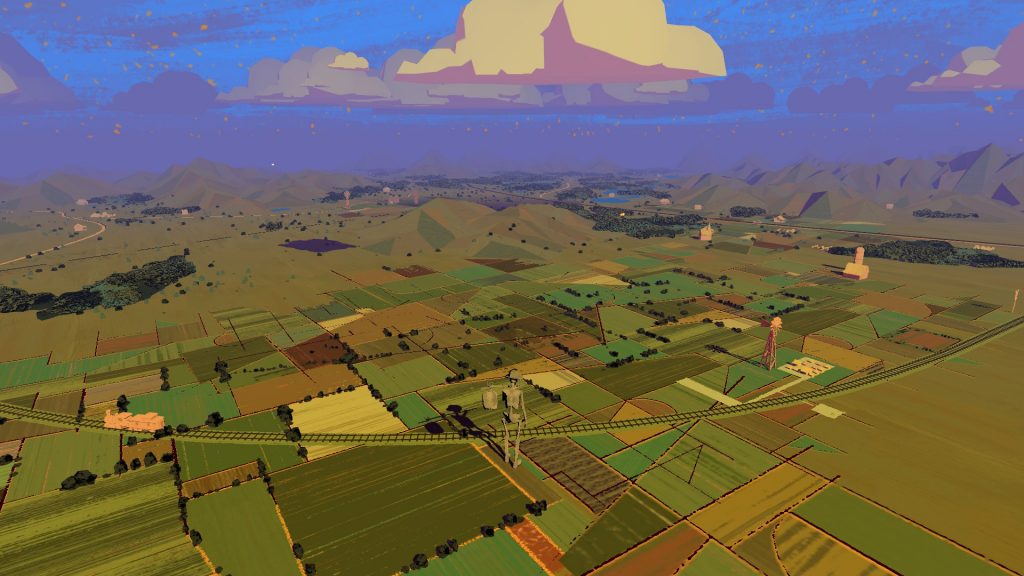 When it comes to pleasure of the eardrums this game hits all the right notes. I found myself lingering for long periods of time while walking the map just to listen and foot tap to the beautiful songs. Featuring well over a dozen live performers and songs ranging the breadth of American music, from folk to bluegrass to big band jazz. Like America itself, this album is one big story, woven of many small ones. The composer Ryan Ike marries together an outstanding performance of chords that add to the atmospheric feel of this game including the songbird voice of Akenya, it just couldn’t get better than this. Just when you thought the music was great along comes the voice acting with suburb performances by Sting, Dave Fennoy (Telltale’s  The Walking Dead), Cissy Jones (Firewatch), Kimberly Brooks (Mass Effect) Sarah Elmaleh (Gone Home), Melissa Hutchison (TellTale’s The Walking Dead), Elizabeth Maxwell (The Legend of Zelda: Breath of The Wild), and many more. Have a listen below to some of the characters you will meet and also a taste of the music you’ll come to adore, I guarantee you.

Where The Water Tastes Like Wine combines 2D visuals with a 3D overworld and features gorgeous hand-drawn illustrations by Kellan Jett. I loved how detailed everything was, from the gorgeous map of greens,browns and blues of the fields to the ever changing sky that glimmered against the land as the game turned into night. The characters I met were excellently crafted, right down to the clothes they were wearing, every small detail adhered to. I loved the colours used in the tarot card storytelling wheel that comes up when you meet another person, the designs and symbols were very unique and not something you come across a lot in the gaming world. The attention to detail and the use of bold outlines were a very pleasant change, especially in an indie game.

In a game like Where The Water Tastes Like Wine you could experience situations over again or try something different each time, for instance, telling a story differently for another outcome but I think for me the re-playability of it in total would be quite low. You have many places to visit and people to talk, ( not to mention the times you just stand there and listen to the wonderful music ) this in itself would take many gaming hours to complete so I’m not sure if it would be something I would want to go back to do again once experienced, it would take the value away from the first time. There are achievements you earn after speaking to and hearing a person’s story though so for people who enjoy that, there’s plenty of those to keep you busy.

Where The Water Tastes Like Wine is an amazing game that will keep you enthralled and engrossed for many hours. The music and voice acting alone was second to none and thrown into that was a riveting story that made you hungry to know and discover more. Without a doubt, I would highly recommend this game to anyone that loves something a little different in their gameplay and who love to hear stories, sometimes about love, hope or death, they all play a beautiful role in this remarkably well-made game that will certainly be one to add to my best indie games list. Where The Water Tastes Like Wine receives an outstanding Gold Thumb Culture Award.