Gravel from Milestone has dropped down some steep hills and brings a taste of what rally games could be. It could potentially be classed as a spiritual successor to Sega Rally. I know, that is some big claims, but with its straight forward racing and responsive controls, you could be fooled into it.

Gravel is classed as the ultimate off-road experience, now that is some hefty claims, but it does live up to it in some respects.

During the main portion of Gravel you are taking part in the wildest show on the Gravel Channel web TV, travelling around the world, discovering the wide variety of environments and defying the Masters! Enjoy four different disciplines throughout your Career as a star of the off-road racing – Cross Country, Wild Rush, Stadium and Speed cross –and live the driving experience with the most powerful vehicles on any type of terrain.

There are a large number of environments from the Sahara desert, to the frozen tracks of Alaska, each track varies in length and complexity, so you are going to need that brake button, or pedal. Add to that the large number of cars, all from Vauxhall Astra’s to a nice bit Hummer. There are plenty of cars there although, aside from the smaller more nimble cars, each one doesn’t feel a massive amount different in terms of handling.

Beating the Masters is the main aim of Gravel, each one a Master in a different speciality. To unlock the race and take them on on track you have to get a certain number of stars. Each race you come across gives you the potential to earn up to 3 stars for completing certain objectives, from purely finishing a race, to finishing on the top spot of the podium. Earn enough and you unlock the next Master. Beat them on track and then rinse and repeat. Its really pretty straight forward in terms of your aim. 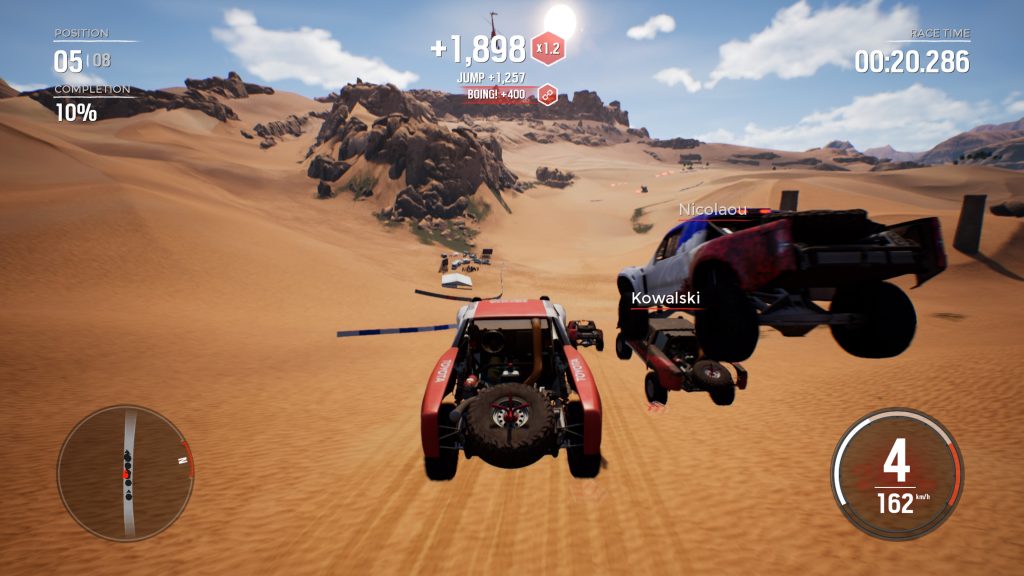 I can see my house from here!

During your trip gaining stars you will come across a number of car classes, these are

Huge areas with different layouts, perfect for competing in checkpoint races in the most evocative landscapes.
Run through a waterfall with the aurora borealis as backdrop or try the right grip in the largest deserts in the world.

The wildest locations where you can compete in lap races.
Unique environments with natural obstacles that will force you to race your way through the slopes of a mountain, on paradise islands, and through masses of debris and quarry rocks.

Races set in the most beautiful tracks in the world.
Real-world tracks, from Europe to America, where you can show your skills in incredible jumps and chicanes.

Real and fictional arenas, full of jumps and spectacular layouts!

All culminating in the final battle with the Final League Master. Beat this guy and become the new Master! It all sounds so Kung-Fu! 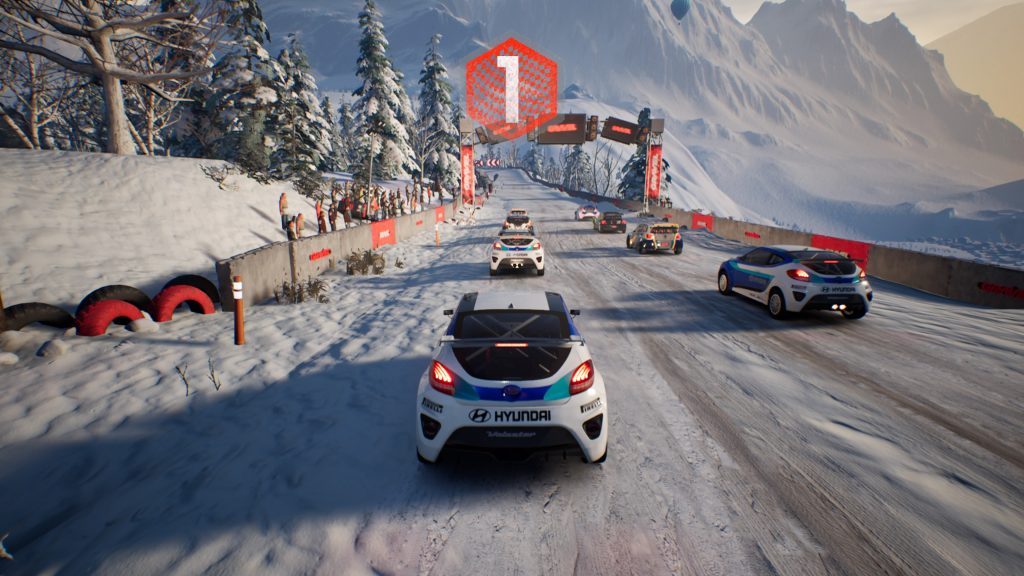 There is snow everywhere!

Controlling the cars is straight forward. Accelerate and stop, handbrake for those fun times, and plenty of camera angles to chose from. Its when you connect a steering wheel it starts to get more fun. Yes you can play Gravel with a steering wheel! Its like playing Sega Rally in an arcade booth if you have a wheel and a seat. Flipping that wheel from side to side to try and get around those corners is great fun. Its not a realistic sim like Dirt 4, but its accessible, the pick up and play aspect of this game is massively at the forefront. Don’t be fooled though, Gravel will chew you up and spit you out just as quickly as me eating a Brussel sprout!

Moving away from the main mode you only really come up against a few other options. Free Race, Time Trial and Multiplayer. Although there is a weekly challenge mode where you can earn some big experience points. These modes are all pretty self explanatory so I wont waste any more of your time.

On the one hand Gravel has some incredible pretty visuals, but then on the other they are incredibly sub par. In particular the car models during the car select screen. These could be mistaken to be a previous generator console. With the lack of reflections and depth to the colours its a bit dissapointing. However get into the race and everything changes. You start getting those reflections, you get incredibly detailed scenery. In particular the Sahara levels are incredible. With the draw distance incredible you can see for miles and miles. 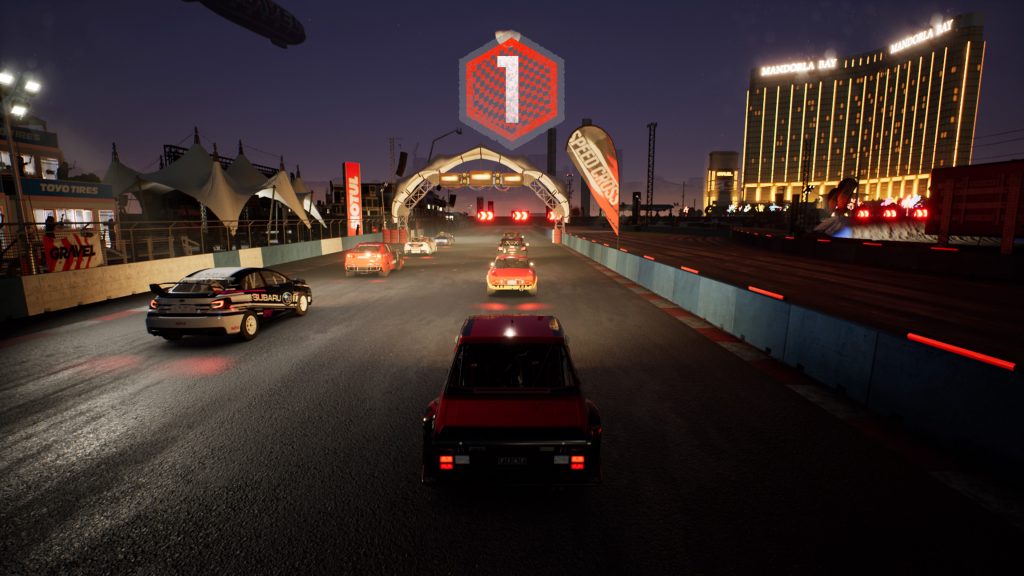 Its not without its problems, in particular graphical glitches are quite evident on some levels, whilst this isn’t a problem that effects the enjoyment of the game, when the sky is flashing to black constantly it gets a bit annoying.

Gravel has a great soundtrack, with some great tracks, although the main game sounds that you will be listening to will the cars. Unfortunately there isn’t a massive variety in the engine sounds, but just enough to differentiate between the larger more cumbersome cars, and the smaller nippier cars.

Throughout the game you get a narrator that is massively enthusiastic, and at the beginning its great. Some great pearls of wisdom to guide you through the game, unfortunately after a while I just ended up skipping all the cut scenes and getting to the action.

So depending on how good you are at racing games, Gravel might last you quite a while. Especially if you are a trophy hunter, with one in particular requiring you to get all the stars for all the races. Then depending on how much you like to go online and play against other human racers, you might get some more time out of the game. 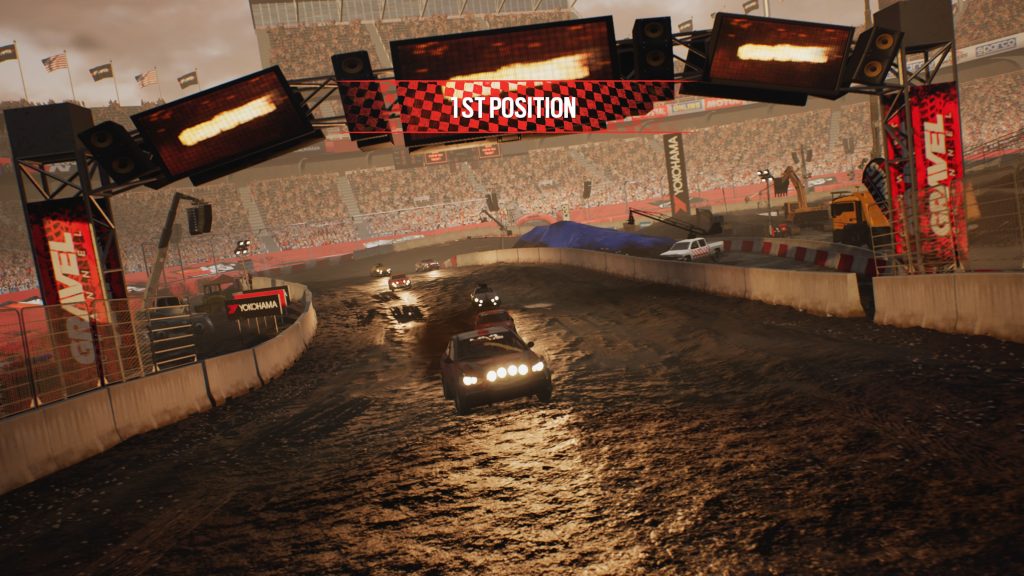 Time for some reflections

Don’t worry Milstone are releasing a couple of freemium packs as well starting in March 18.

All in all Gravel is a great arcade rally game, and thankfully it doesn’t try to be anything different. With lots of car choices, and from lots of different eras there is plenty to get stuck into for the time being. Will it continue and grow as the game ages, who knows, but for now if you want something that is easy to pick up and play with no major learning curve, then Gravel might just be the game for you.

Codemasters Announced DIRT 5 For Next Gen

Codemasters has announced that the next generation of racing with DIRT5. Launching in October ...

Dirt 4 – Announced And Released This Year

Codemasters are releasing Dirt 4 this coming June on PC, Xbox One and PlayStation ...