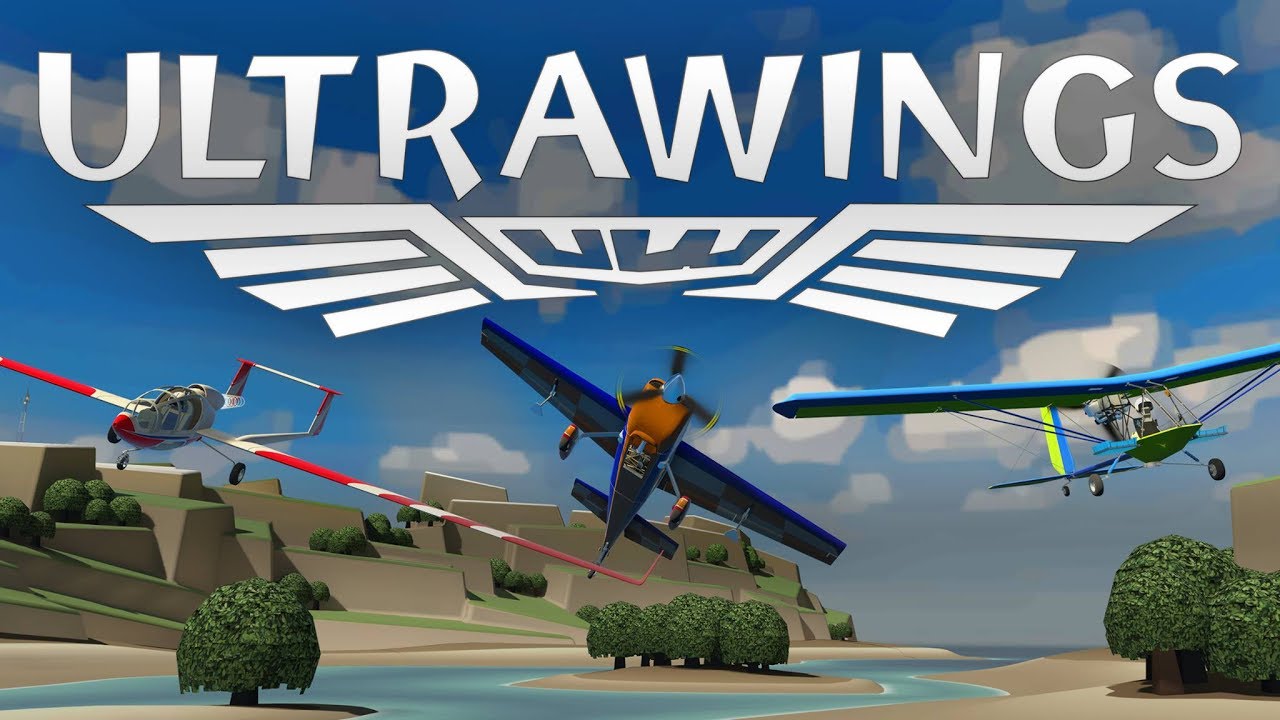 Ultrawings is a new PSVR flight ‘sim’ from Bit Planet Games. I use the word ‘sim’ loosely’ as after playing it for only a few minutes I realised it’s a lot more user-friendly than I generally find sims to be.

The premise of this title is simple, build your aviation business by taking on various jobs across multiple destinations in the island themed world that you find yourself in. However, don’t take simple as boring. This game is far from it and here is why I believe it’s this generations version of one of my favourite flight games (Pilot Wings).

So, when I first loaded up Ultra Wings I decided to play it safe and use the Dualshock 4, I wanted to get a feel for the world and visuals without having to worry about the controls (as we all know there are times when the motion controllers on PSVR can be annoying). While this wasn’t a bad decision (the game is still a lot of fun using the DS4) I can truly say the difference using the Motion controllers is night and day.

Using the Dualshock the controls are very standard and arcade like, one button for Throttle, an analogue stick for direction and the shoulder buttons to tilt the aircraft with a few other bits and pieces thrown in, however when you pick up the Move Controllers and you have to physically push those corresponding buttons on the dash, not to mention actually pulling on your Joystick (No… Not like that!) it’s very easy to lose yourself with the finesse that is required to make certain manoeuvres possible but for me that’s what made it all the more addictive. 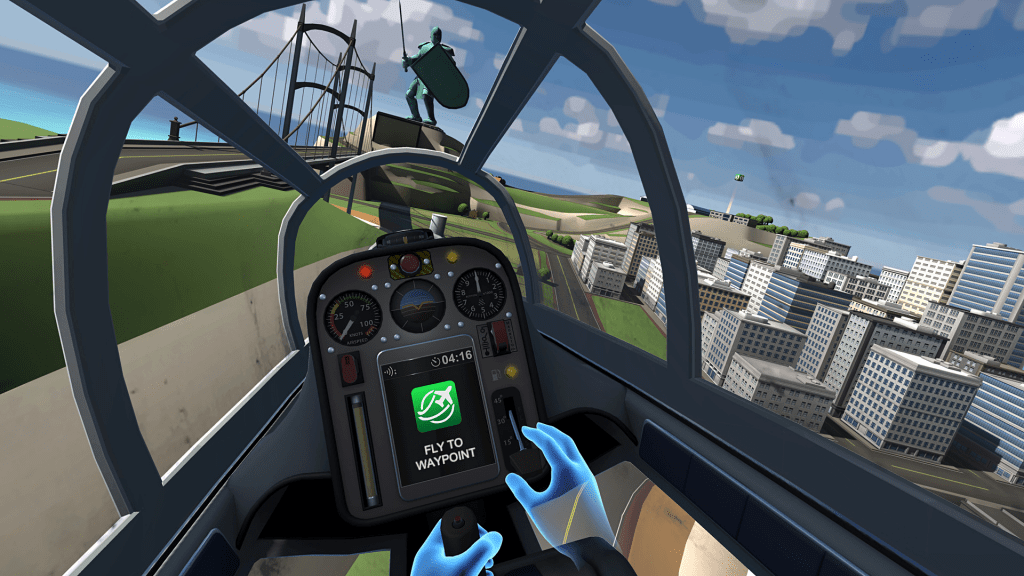 As I mentioned earlier Ultrawings is based around taking various jobs to build your business across multiple islands, these jobs vary from simple timed destination runs, deliveries, even taking pictures of landmarks throughout the world all of which are available through the laptop located in your office. Each island has a hanger and office that you can work your way up to purchasing which in turns opens up the world and job variety even more.

Before starting any of these jobs you will need to obtain your licence which is basically a tutorial woven into the story of the game, a feature which I particularly enjoy in any game as it gives a smooth transition from hand holding to flying solo (pun intended.)

Throughout the whole process of the tutorials and the ‘career mode’ as such, I was surprised by how natural and smooth the movement of the plane was within the controls. Normally with VR titles there is either the Incremental movement system or Teleportation. Obviously neither would really work in this scenario but the natural movement of the plane and its reaction to your controls caused no motion sickness for me (There are settings which can be adjusted to limit your field of vision from within the plane to help combat this should you experience it). 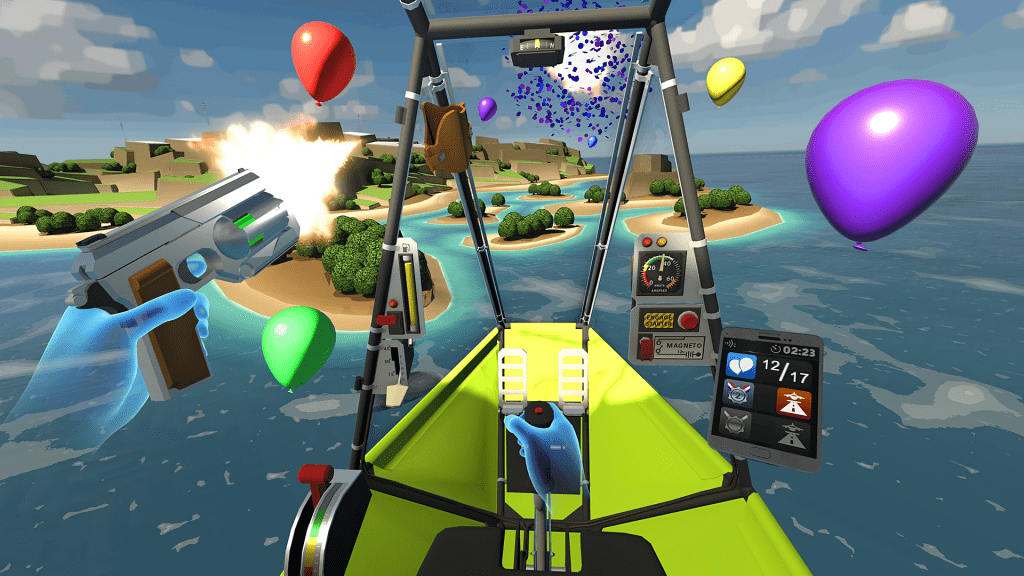 One of the only things that particularly bugged me with Ultrawings was the photography jobs. I found the controls and general combination of flying and taking pictures to be more cumbersome and frustrating than it should be. There is a tablet / phone in a dock on the side of the cockpit that does not move and the idea is that you line up the shot using the body of the plane and touch the screen to take it, however I couldn’t help feeling like if the situation was real It would be so much simpler to just hold the tablet / phone up to the window with one hand and snap a pic while still controlling the plane with the other.

The Jobs aren’t the only thing Ultrawings has on offer though as there’s also an Arcade mode, which to me is where it’s most like my old favourite Pilot Wings, the reason for this is you will be going through tasks such as timed courses, flying through rings etc. which is always fun and VR just takes it to a whole new level.

On top of that there is also free flight mode where you can just take off and enjoy the sights and relax. Just don’t forget to keep an eye on that fuel, it really doesn’t last as long as you’d think..

While Big Planet Games probably won’t win any awards for graphic realism in Ultrawings, it’s not without its charm. Personally, I have a bit of a soft spot for games that have this kind of retro style to them. I know a lot of people follow the mind-set of wanting the latest games to look as real as possible and that’s perfectly fine, those games have their place as well. But in my opinion when we stop also appreciating and enjoying games that look like this we will have forgotten our gaming history and that’s pure sacrilege!

Due to the art style of the game there are a fair number of breaks where the islands as well as parts of the plane will just glitch out completely, you may say it’s annoying and I would understand why but I didn’t mind too much, for me it just added to the experience.

The one thing I couldn’t forgive here was the lack of effects and visuals when you crash, the screen just goes completely blank and then restarts you back at your desk ready to go again. I would have liked some kind of animations to go with your untimely dea.. oh wait, you can’t die in this game… your untimely teleportation from the plane.

I’m sure everyone can relate to the pain that is caused when you put on some headphones to listen to music and that moment occurs where you forgot how loud it was and you feel as though the music has just burrowed its way inside your skull and vibrated around a little. Well that’s how the Radio is on Ultrawings every time you start. Don’t worry, you can turn the radio off in your office. But, it will be there waiting for you to return next time…

That isn’t to say that the audio in itself is bad, it’s not great, but I’ve definitely heard a lot worse. The plane engine and ambient noise is perfectly fine, the control tower and tutorial voices are a little loud but they are very clear and not too offensive. I just think they just need to tone it down a little in places and level out the volume across the board to make it more enjoyable without spending 10 mins every time in the options screen adjusting everything.

During the time I have spent with Ultrawings I can honestly say I never became bored, while some of the jobs are repetitive, the arcade mode and free flight modes help to break up the challenge of dealing with repetition and you are able to pick which job you want to do so if you’re tired of flying through rings and taking pictures, just do some timed delivery drops instead.

I don’t see this game as one that you will pick up and play constantly day after day, but at the same time I do feel quite strongly that once you get into it you will find it staying on your PS4 long-term as one of those ‘chilled gaming’ titles that you can relax into after a hard day of playing other games.

I’ll say here, this game is really not for trophy hunters. There are only 10 trophies in total and they’re a grind. Half of them are based on the amount of hours you spent in the air. Oh, and there isn’t a Platinum trophy for this game either… 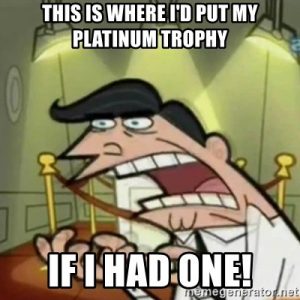 As someone who spent a large chunk of my youth on Pilot Wings back in the day (no I’m not telling you which version as that would reveal how ancient I am), Ultrawings gave me that nostalgic feeling I was hoping for.

Does it have its problems? Sure, it’s got its flaws and it’s not perfect but that didn’t stop my enjoyment of it. Anyone looking for a flight Sim style game with a touch of arcade magic should check out this title. For just over a Tenner (£11.99 at time of writing) I feel it’s a bargain of a game.

I believe it was Orson Welles who once said ‘There are only 2 emotions in a plane: Boredom and Terror’. He clearly didnt have a PSVR and Ultrawings! I think that Ultrawings deserves a solid Thumb Culture Gold Trophy Award.