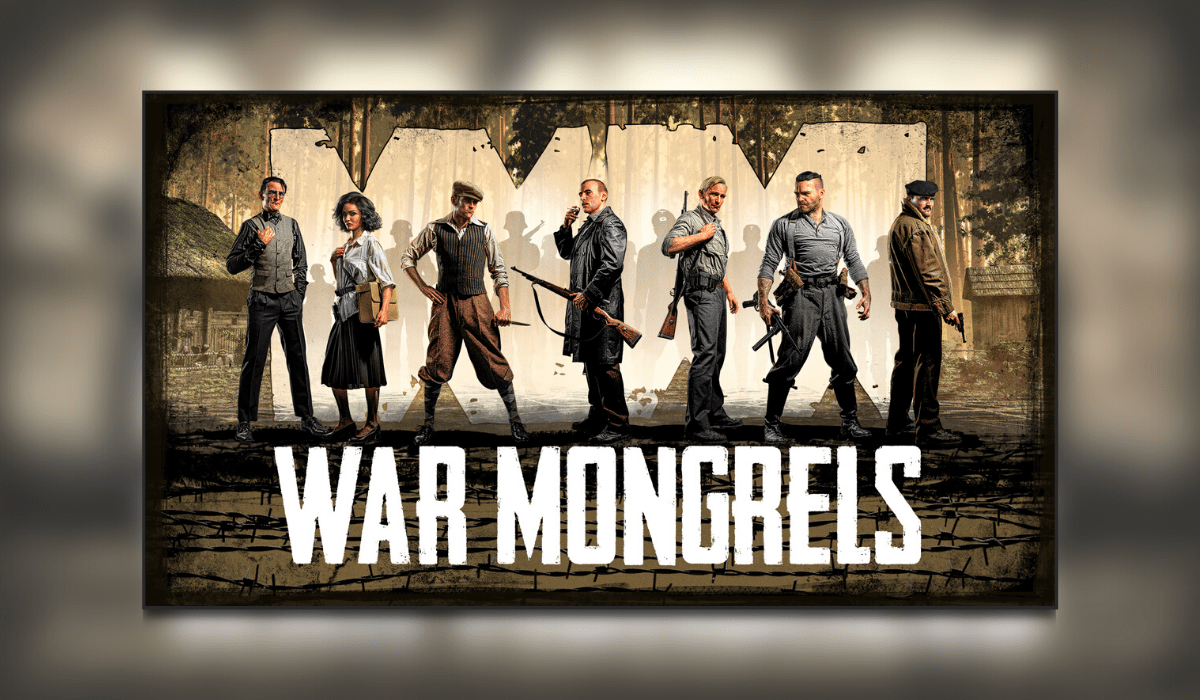 Today I bring you my review of a new PC game named War Mongrels. This game was released on to Steam on October 19th, 2021, and is brought to us by developers Destructive Creations (IS Defense, Ancestors Legacy, Hatred) and publishers Surefire.Games (Heroes of Hammerwatch). War Mongrels is a real-time tactical action game akin to others like Commandos, Desperados, and Shadow Tactics: Blades of the Shogun. Take control of a group of German, Polish, and Lithuanian freedom fighters and help them fight through German outposts, patrols, and villages.

War Mongrels Give Plenty Of Bite

Check out my previous game review here where I played Nuclear Blaze. If you would like to follow us on social media there are links at the bottom of this article.

We start the game, as always, with a rather simple tutorial. This just explains the basics of the game to us, how to move around, how to select more than one hero at a time. You get the idea. Not long after we learn how to move, we’re running down the trenches as allied forces storm our former comrades. Soon after we’re shown how to take down German soldiers with Ewalds bare knuckles and Manfred’s trusty knife.

The story follows Manfred and Ewald. These two are basically running away from the front lines of ww2 after being enlisted into the German army. Along the way to freedom, we meet some people who want to help us. Lukas is just one of these. His specialties are traps and explosives. Each hero you come across in War Mongrels has their own special little tricks up their sleeves, be it brawling, laying down bear traps, being able to disguise as a Nazi SS officer, there is a lot of different ways to take down enemies in this game.

It’s not all about stealth though. You can raise your firearms and cause some havoc among the opposing forces. This isn’t always a good option though. You will most definitely need to take the stealthy route in a lot of case scenarios. For example, you can switch to Manfred to use his whistle skill to lure soldiers to a bush whilst you’re hiding in it. Then switch to Ewald to clobber them and hide their body in said bush. Manfred also has a pocket watch that he can throw to distract soldiers, allowing him to sneak up behind them and use his trusty knife to make them go bye-bye.

Another neat feature in War Mongrels is the planning mode. What this allows you to do is similar to that in the XCOM series where you can plan your attack for each of your heroes and then resume the game. For example, this will then result in Ewald taking down one enemy unit, Manfred taking down another, and Lukas taking down a third all simultaneously. This can be very useful during missions, so make sure you make good use of it.

Some levels also have traps that you can trigger. In Chapter 2 you need to get a key from an officer. What you can do is slowly make your way around the random troops dotted about. Lure them into a bush and stealthily take them down one at a time. You can then move to a German truck that is on a ramp. Release the brakes and this will roll off, crushing the enemy officer and enemy soldiers that are in its path. There are quite a few different ways of using the environment to take down enemies, so keep your eyes peeled for these.

In a nutshell, there are lots of different ways of taking down the enemy. So jump on in, experiment and see what works best for you.

The graphics are rather nice. Considering the game has an isometric view that allows you to pan and rotate the camera around, the team at Destructive Creations has done a fine job with War Mongrels. Textures look very good, even when you zoom in closer. The characters, buildings, vehicles, and foliage models all look like they have been created with a passion and are nicely detailed.

The audio in War Mongrels is very good. The music gets tense when you’re in the heat of battle, but calm when you’re sneaking around. There’s a certain area in the game also which is basically a mass grave. This results in the music dynamically changing to an eery yet sad-sounding song to draw your attention to the horrors that appear in front of you. The sound effects in War Mongrels are also brilliant. The voice acting is of high quality and one of our heroes is voiced by the legendary Doug Cockle. You may know him as Geralt in The Witcher games.

War Mongrels can take anything up to 30 hours to complete. There are 12 chapters for you to sneak, fight, and shoot your way through with your heroes. Each chapter has different challenges for you to complete also. This is good for the achievement hunters among us as you will have some replayability in this game. There are a total of 59 achievements for you to earn also. Of course, there’s nothing stopping you from playing through the game again and again.

War Mongrels actually took me completely by surprise, it’s a great game. I loved some of Destructive Creation’s previous work such as the controversial game from them, Hatred. This game will definitely get you thinking of good ways of taking down the enemy whilst not alerting the others surrounding you. Just remember to hide your other heroes when you’re sneaking around. As when I was with just one hero I had enemy soldiers catch me off guard a few times. I give War Mongrels the Thumb Culture Gold Award.