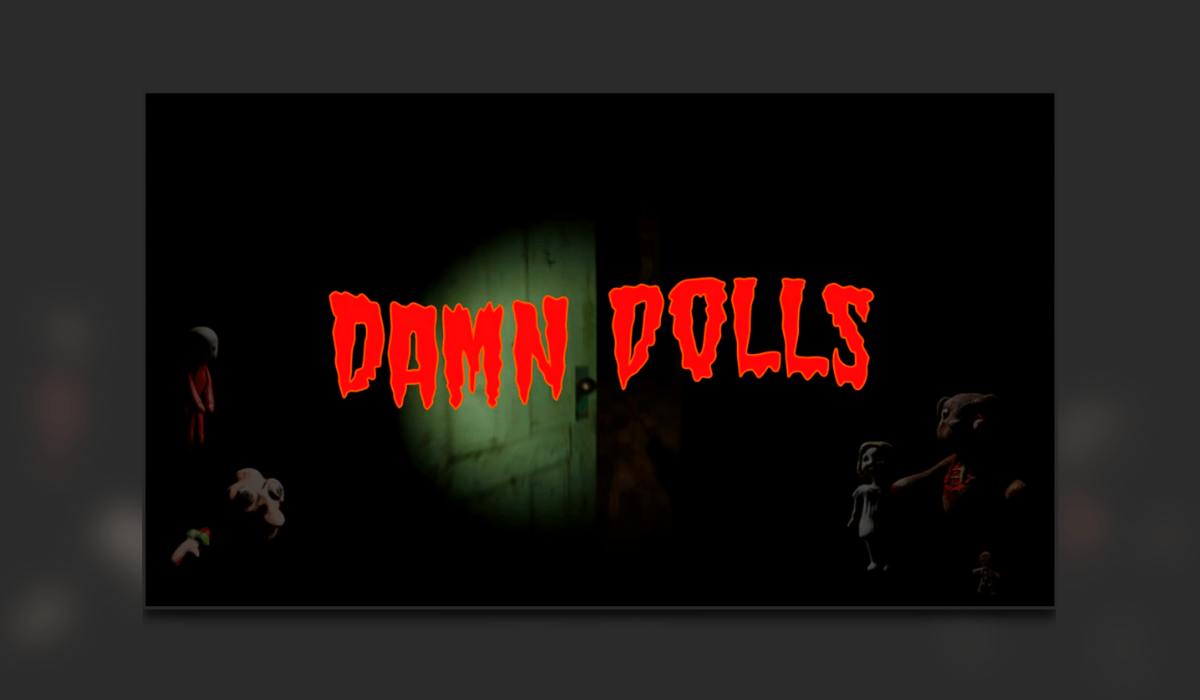 October.  The time of year where the leaves are falling, Halloween decorations are up, and the constant fear of having it rain on Halloween is in full swing. In honor of it being October, we at Thumb Culture are going to be playing some horror games and writing our thoughts on them, this being one of them. Let us present to you our review for Damn Dolls

Damn Dolls is an indie horror game released on Nintendo Switch and PC. It was developed and self-published by first-time game developer Rodrigo Riquetto and was released on October 11th, 2021.

Damn Dolls – Those Sure Were Some Damn Dolls

I’d say I’m pretty familiar with these types of survival horror games. The stuff where you walk around a scary place in first-person mode and try not to freak out from all the jump scares. I’ve played my share but they have been kind of dull lately. We’ve seen it again and again and I think we crave something better and unique. So I’m hoping this is a good survival horror game that feels fresh and we can see if the developer can show he can make a good game. If you’ve played Damn Dolls and want to share you’re thoughts or want to support us, leave a comment down below. We always love to hear back.

Damn Dolls opens up with a title card that fills you in on what’s going on. No fancy effects or voice acting, just a bunch of text fit onto a single screen and then the game begins. You play as Suzi, a nameless and faceless protagonist who finds out that her best friend, Ana, has gone missing. The only evidence you have is that Ana was last seen on a road that led to an old house which was owned by a man who was framed for kidnapping and killing a girl. It’s said that the man later had his house broken into by angry locals who beat him until death.

After the text, you find yourself inside a living room. And let me tell you about this room, because you’re going to be in here for awhile. The only way that seems to be a way to continue on is a hallway that’s blocked by a floating doll. If you go near the doll, it will kill you and make you restart. So eventually you realize that you have to find something to move the doll, but it’s harder than it looks.

The living room is so dark that you can’t see anything and you do get a flashlight but it doesn’t do much. You can open a door that leads you into a bathroom but all it does is give you a hint. And by the way, the weapon you start off with is a gun that feels like you’re shooting a stapler, which of course, has very poor animation to show the gun being fired.

And dear lord are the controls awful in this game. The analog stick to move the camera is very sensitive and having that combined with the room being dark and tough to get around in, you better have some aspirin with you because it gets disorienting. It’s even worse if you play it on handheld.

And the setting of Damn Dolls is just boring to look at. It’s a typical haunted house with scary stuff in it, that’s it. This kind of stuff was old when the first Resident Evil game came out. There’s nothing really interesting that stands out in the house either. You have a bunch of random stuff but that’s it. It doesn’t feel like someone used to live here.

Damn Dolls is made off the Unity Engine and when I saw the logo appear, I said to myself, “Oh, this is probably going to look bad huh” And I was right. Since the Unity Engine became free to the public, we’ve seen a lot more terrible games with terrible graphics being made. There are many other games that have used the engine and have turned out great, but there are more bad looking ones. And sadly, this is one of them.

I don’t want to give a lot of hate to the developer since it’s only on person but man this needs to be worked on more. Every object and every piece of scenery just looks off. There’s no real detail to it. It feels like any random thing was programmed without the slightest attention to detail. To be fair, maybe the engine can’t handle something like that but seeing what the engine can make, it should at least look a lot better, especially for a game on the Switch.

I will say, one thing the developer nailed is the sound. It’s not incredible but it was better than I thought it was going to be. The sound fits the game well in every part of Damn Dolls. One gripe I have is that the game features the trope of using a loud sound to scare you. It fits the setting but you could do this to anyone at any part of day and it would scare them. And it’s been done to death.

With what I’ve said about Damn Dolls look being boring and having the single concept of walking around a spooky house, you have probably figured out that there isn’t really anything else to do. There’s no hidden easter eggs or anything like that. It’s just get from point A to point B. And not having any of this stuff doesn’t ruin the game for me, I think it would just be cool to see.

Anyway, if you are able to not get motion sick and see through the darkness while playing Damn Dolls, it is a proper amount of length. But I do think you can beat the game in a single night.

Since joining Thumb Culture, I’ve played more games than I ever thought I would. With that, I’d say Damn Dolls is one of the worst. Just from the opening, I could tell this was going to be a rough one. The plot is uninteresting, the controls are terrible, the graphics are unbearable to look at, and it’s just a boring game to play. Halfway through the game, I felt like leaving multiple times but I buckled down and kept going.

I will give the developer credit because it does take a lot of work to make a video game and have it finished. He could have abandoned it or released it unfinished but he continued and finished it. And the fact that he self published it is also fantastic. But I think Damn Dolls does need to have more work put into it. A major polish needs to be put into the graphics and storyline.

With that, I am giving Damn Dolls the Thumb Culture Bronze Award.