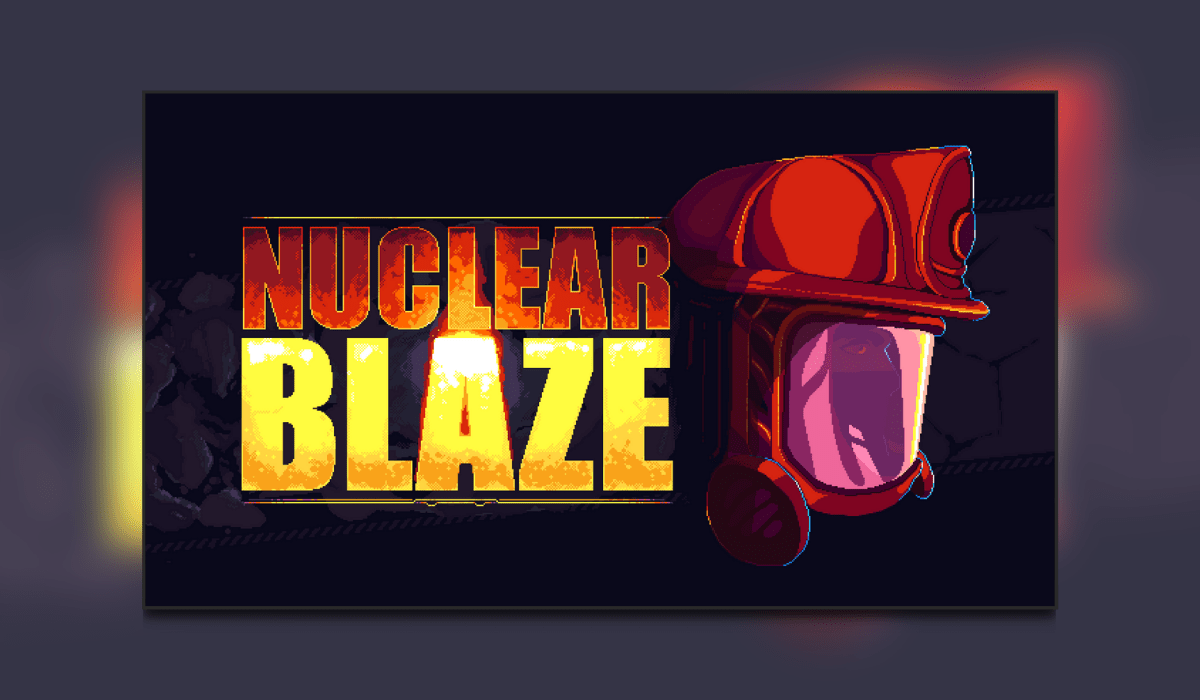 Nuclear Blaze is a 2D action-adventure game where the player controls a firefighter who has been called to a fire and must help control this blaze. We are soon to discover that there is something else hiding away in this woodland. This game is available now on Windows via Steam.

Have A Blast In Nuclear Blaze!

Can Sébastien’s talent from Motiontwin transfer across to a new genre of game in Nuclear Blaze? Continue reading to find out. Check out my previous review here where I played Train Station Renovation on the PS4. As always, drop a follow on our social media accounts to keep up to date with Thumb Culture.

As mentioned, we play as a firefighter called to a blaze in a woodland area. As we fight through the blaze, we enter an area that has military vehicles and containers covered with camouflage netting. The game soon brings us to a mysterious facility, which fire control tells us is not on their map and they do not know that this building exists. We continue through the building to discover that the blaze isn’t our only obstacle here. The building contains many hazards such as exploding walls and ceilings, back blazes when you kick doors down, electrical hazards, and more.

The gameplay is fantastic in this game. Nuclear Blaze is fun from the moment you start until you finish. It has different ways for you to tackle obstacles in the game. If you’re stuck at a point, there may be another route you can navigate around in the larger space you’re battling the blaze in. So use your noggin and don’t keep dying in that same exact spot as you may be able to drop down a ladder and come at the blaze from another direction.

Also, you need to be fast when extinguishing the fires in each area as the fire will re-light itself and cause more havoc. Especially after kicking a door down and the back blaze blows you 20 feet back from where you came. Fortunately, you have the ability to douse yourself in water to extinguish the fire that surrounds your fragile body. You can unlock more abilities as you get further into the mysterious military facility, such as the ability to dodge, use your water hose whilst climbing ladders, and more.

There is also a very mysterious story that surrounds this facility, as you venture deeper into the unknown you find out more and more information. Can you survive the fire and solve the mystery of this hidden military facility? Only you can answer that question.

I love the art style. It definitely reminds me of Dead Cells with the 2D setting. The effects in the game are brilliant when extinguishing water, the way the water flows around, the pixelated textures of the in-game scenes. I love it all. The game ran flawlessly on a couple of different PCs that I tried it on. One has a Ryzen 5 3600 with an RTX 2060 Super, the other has an Intel Core i5-8400 and a Geforce GT1030. I did not experience any frame drops at all with this game, and it also ran very well via Steam Link to my Samsung Tab S7+.

The audio in Nuclear Blaze is also very good. Sound effects are brilliant, they really help set the scene in the game. I also thought the music in the game was awesome, it gave me those midi vibes from older games on platforms such as the Commodore Amiga and Atari ST.

Unfortunately, the game only lasted 2 hours for me. However, at the price that is being asked for this game, I think it is definitely a good case of quality over quantity. There are hidden kittens around the game for you to find. Of course, this does add time to the game and gives you some replayability.

Even though Nuclear Blaze is a short game, it is fantastic. I thoroughly enjoyed playing this game and the challenge it gave me at certain points. Congratulations to Sébastien at Deepnight Games for creating such a masterpiece as the debut game from his new studio. I will leave you with the reveal trailer below and of course, Nuclear Blaze has earned the highly deserved Thumb Culture Platinum Award.