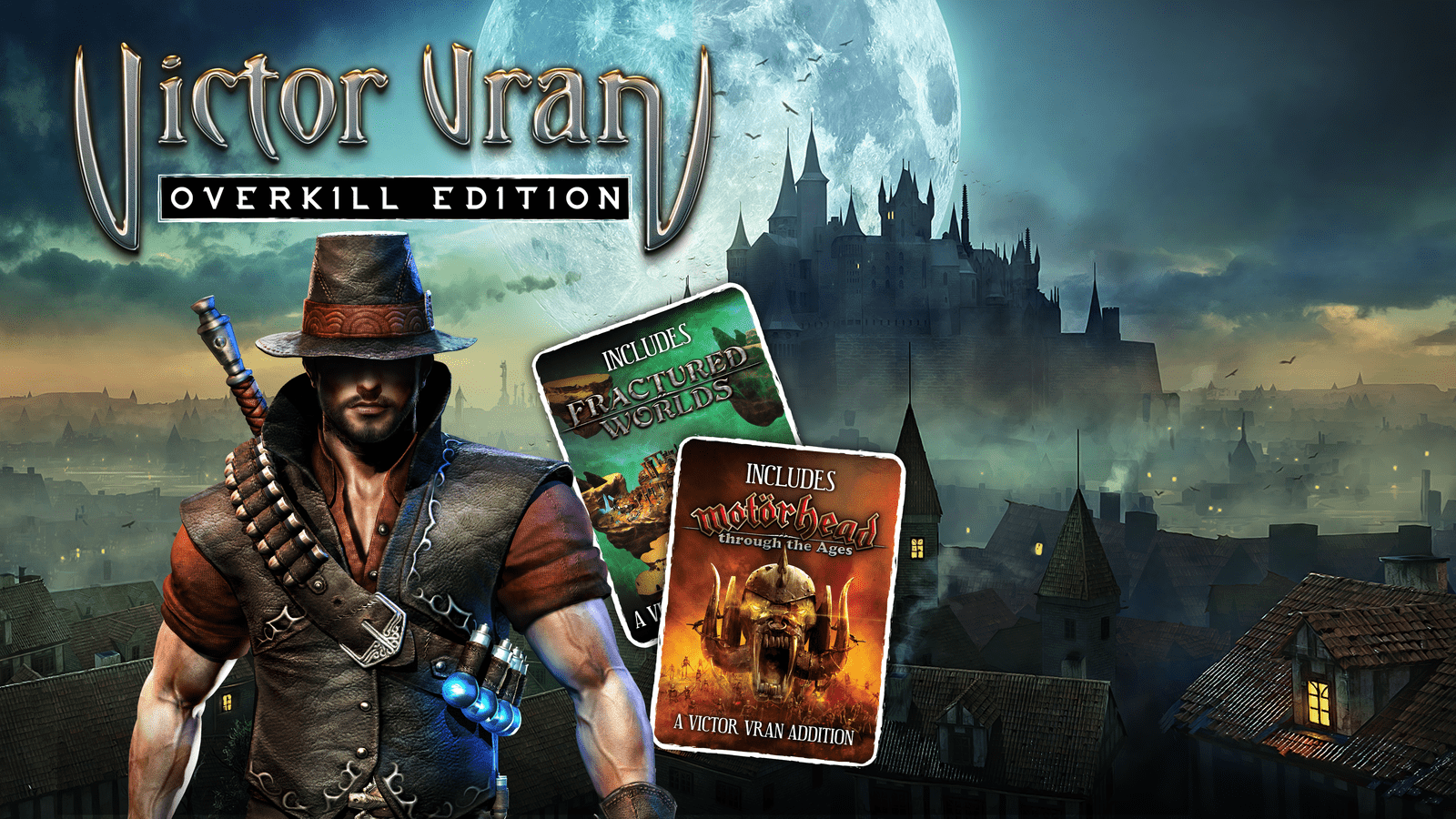 Victor Vran: Overkill Edition, developed by Haemimont Games and published by Wired Productions is an award winning isometric action RPG crawler that lets you take on hordes of demons and clever bosses as you battle through your adventure as Victor Vran.

Originally made for PC, Victor Vran: Overkill Edition makes its debut on Playstation 4 & Xbox One.  Having been completely rebuilt from the ground up, the new improved version running at 60FPS includes two new expansions; Fractured Worlds and the head banging Motörhead: Through the Ages.

“We’re delighted to finally bring Victor Vran to consoles, answering the call of many Victor fans,” said Gabriel Dobrev, CEO at Haemimont Games. “We are incredibly proud to have collaborated closely with Motörhead during the development of Motörhead: Through the Ages. We hope that we have created an experience which lives up to Lemmy’s legacy.”

In true dungeon crawler style, Victor Vran allows you to enjoy the game on your own, local co-op with a friend or even take part in an online 4 player session for maximum devastation as you take part in both randomly generated daily and weekly maps.

If you love games such as Diablo III, Gauntlet and Lara Croft Temple of Osiris then you will enjoy Victor Vran as many of the elements are similar.  Once you have chosen your demon hunting Victor character and your level of challenge you are ready to enter the world of skeleton hordes and all manner of beasties that want you dead.

The controls are very tactile and the fact that your character can jump and dodge roll is refreshing as some games within this genre are fairly restrictive when it comes to movement.  It is worth exploring the maps as there can be hidden areas to get to by getting onto a nearby ledge.  If you cannot make the jump to a ledge in a single leap, look to pull off a wall jump using nearby objects.

Your Victor character has a fine inventory that allows for progression and customisation as you accrue new weapons, equipment and powers.  A typical inventory holds two weapons, two demon power cards, destiny cards that allow buffs and debuffs and two equipment slots for potions and medi-kits.  All of the inventory items are discovered through exploring the map and collecting loot through defeating your enemies.

Dynamic combat allows for fast inventory changes when required so that you can adapt to the various types of threat that you encounter along the way.  Weapons vary from rapiers, swords and scythes to shotguns, lightning guns, tomes (spells) and even guitars!  The ability to hot swap between two types of weapon definitely has its advantages and allows for both ranged and close quarter combat at the flick of a button.  Each weapon has a primary attack and two cool-down restricted secondary attacks that when combined at the correct time can inflict devastating combos on anyone unfortunate enough to be too close to you.  Victor also possesses demon powers that can be triggered once the yellow overdrive bar on the HUD has filled up enough.  The overall result is pure carnage on the screen with shouts of “Overkill” bounding around as you flatten the enemy.

The two expansion packs offer new types of enemy, dungeon, loot and experiences that allow you to play Victor in a different setting.  Fractured Worlds allows you to storm four randomly generated dungeons that change every day as you attempt to piece together the Astrolabe.  A new challenge known as “The Fracture” sees Victor faced with an endless dungeon that gets tougher as you explore further and further into the world.  Within Fractured Worlds, unique Talisman can be discovered that can influence both the visuals and the combat capabilities of your hero, setting you apart from your friends by your own personal customisation.  It is also worth to note that any items found can be used in the original game as well as any of the expansions.

Motörhead: Through the Ages, as the name suggests, is majorly inspired by the band of the same name.  Promoted as “a wild tour through the mythos of the loudest band in the world”, it lives up to its expectations as the soundtrack ramps up a notch and Lemmy’s distinctive vocals hit the speakers hard as “Ace of Spades” begins to smash through the sound system.  The world has been designed with the lyrics and attitude of Motörhead at the centre as you begin to travel through the World of Wars, the Weird West and the Dark Ages facing bosses such as the Preacher, the Fuhrer and the Queen of the Damned.  I swear that playing Victor Vran while listening to Motörhead enhances your quick button bashing skills as I was on fire baby!  Tune after tune came on as I hammered through waves of monsters and collected booty aplenty.

Being an immensely huge fan of gothic architecture, the Transylvanian style artwork looks great on the Playstation 4 Pro from the title screen through to the dungeon gameplay.  60FPS ensures that the animations run smoothly and allows you to feel more responsive when controlling Victor.  Bright vibrant colours illuminate the dark shadows of the underworld as you slash and blow your enemies apart, which lets face it, is great fun to do and a good way to let off some steam!  I love the haunting background to Victor Vran so much that I now have it as my phone wallpaper.  Yes, sad I know but it makes a change from fluffy kittens.

The soundtrack, by George Strezov is nothing short of awesome.  The base game is an orchestral wonder of gothic horror inspired music, uplifting at times and almost superhero like.  Some of the pieces were very broad and profound and I immediately likened them to scores by Hans Zimmer, meanwhile others had a kind of curiosity and excitement similar to those by Danny Elfman.  The game tracks from Victor Vran are available on Spotify here and certainly bring a mixture of awe, wonder and mystery to the game as you battle the creatures lurking in the night.

In contrast to the classical ensembles, Motörhead: Through the Ages features over 12 of the bands hit tracks such as Overkill, Jail Bait, Iron Fist, Paralyzed and the legendary Ace of Spades.  From start to finish the music screams through the speakers as you course through the three worlds that are inspired by the music.

Phil Campbell of Motörhead endorsed Victor Vran by stating “The game is a brilliant homage to the world of Motörhead, one where you can kick-ass to a kick-ass soundtrack!”  I really cannot add anymore to bolster that!!

With ever changing dungeons and lots of loot to be had, Victor Vran is an enjoyable game that does not get old or boring quickly.  It is great fun to play co-op as there is a real sense of comradery between the players as you slaughter your undead foes and help defend your friends.  Haemimont Games have certainly come up trumps for fans of the isometric RPG and the ability to jump and dodge is certainly helpful at times!

The merger between Victor Vran and Motörhead is nothing short of awesome.  Achim Heidelauff who is the Executive Producer and creator of the Motörhead: Through The Ages expansion summed it up nicely by stating “In over 20 years of making video games this is my proudest moment.” I think I would echo that if I was in his shoes too! Victor Vran: Overkill Edition is available now and receives the prestigious Thumb Culture Platinum award with 10/10.