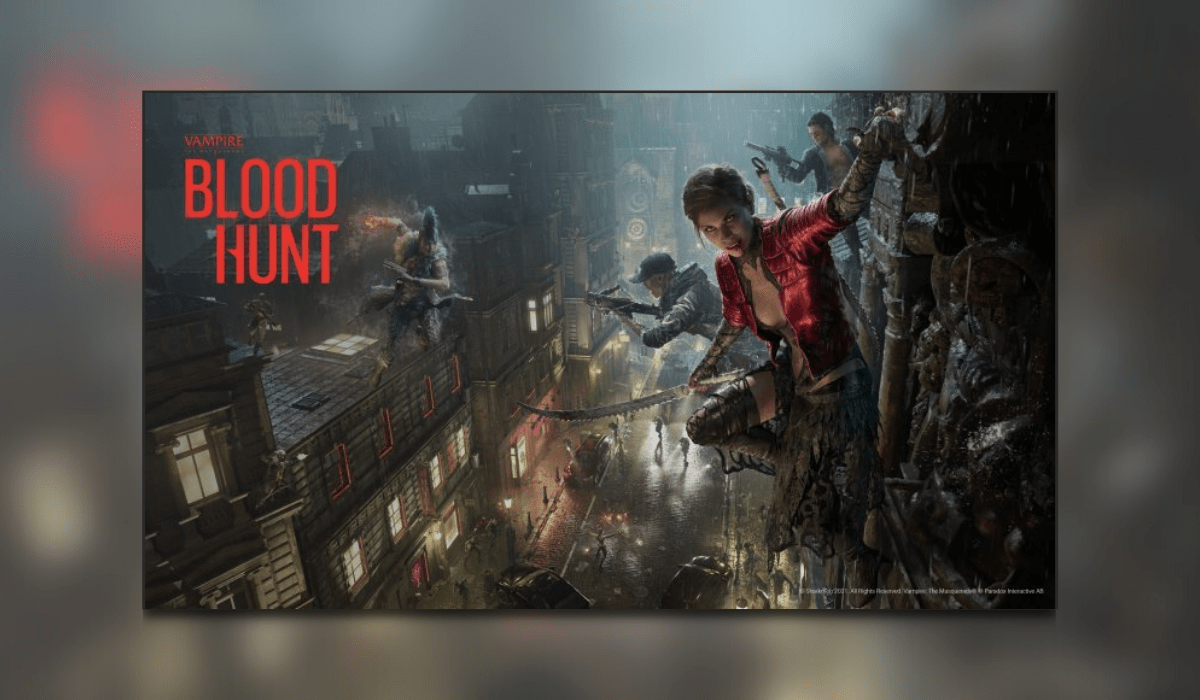 Vampire The Masquerade: Bloodhunt is the debut foray into AAA games for Swedish company Sharkmob. It is an online multiplayer third-person battle royale taking place in Prague, Czech Republic. Fighting through the city and the only rule is to keep your existence a secret, the titular masquerade. I didn’t come across any plot for the game but it is faithful to the World of Darkness setting. Definitely inspired by games like Apex Legends and PUBG, Bloodhunt however is like their goth cousin. Going it alone or in a trio, fighting to be the last vampire standing, and maintaining the masquerade is all that matters.

Vampire The Masquerade: Bloodhunt – Something to Sink Your Teeth Into

I kept up on news and other player’s thoughts and I found there was some disappointment. Many people were expecting an RPG like Vampire The Masquerade: Bloodlines and so feel cheated. I just hope this hasn’t put off too many people and give it a fair shake.

I played Bloodhunt on PC via Steam where it is available now in early access, as well as PS5 if you were lucky enough to get into the beta there. Bloodhunt adds a breath of fresh air to battle royales and broadening the genre from predecessors like Fortnite. The TC team and I would love to hear what you thought in the comments and on social media.

Bloodhunt takes place on a rainy night in Prague, a good cover for 40-50 vampires to fight across the city, and not too off-putting that there aren’t humans to feast upon. The setting was an excellent choice where rooftops to alleyways can be used to each player’s advantage. Playing solo or in a trio, the game begins with picking your spawn point before the game even begins. Choosing your coterie/character class comes with unique abilities. These abilities range from kinetic punches or temporarily stun enemy players. I was also very pleased to see classic vampire abilities appear. These include summoning bats for their echolocation and the player being able to turn to mist briefly.

It wouldn’t be a battle royale if there weren’t various weapons and Bloodhunt doesn’t disappoint. All around the map are everything from axes to assault rifles to suit your play style. Like Apex Legends and Fortnite, weapons have a colourful aura to show their quality. An added layer to gameplay is the presence of NPC vampire hunters. They are peppered around the city and if killed then are a source of better items & weapons. You would find numerous other items around such as armour and healing items, the latter, of course, being blood.

I found Bloodhunt to be a very engaging and fast-paced game. Combat can be over in a flash if you’re not careful and the red wall shrinking the arena is always in the back of your mind. The historic architecture of present-day Prague really is an excellent fit for the map layout. I found myself sticking to rooftops when possible and felt the designers wanted you to. I really enjoyed using the masquerade as a game mechanic. Around the city are human civilians who react to seeing you use vampire abilities and feeding on people. Feeding heals you to full but if spotted, the other players can more easily find you.

I played Bloodhunt on PC and so the team at Sharkmob used various graphic settings. The setting included low to very high graphics as well as going to 1080p 60 MHz. I adjusted the settings when it came to textures, lighting & shadow, even foliage quality. The game was great to experience with the graphics, especially considering it is still in early access. It isn’t without fault though. There were occasional glitches when new rounds beginning which briefly stalled playing but nothing significant or game-breaking.

The audio was also really well done from the environmental sounds to combat. There was no soundtrack or score unless you count the orchestra of weapon fire around the city. Other sounds outside of combat come from interacting with the environment. Sounds of climbing the sides of buildings to running across cobbled streets or rooftops. I found that sound was used as part of the gameplay as a way to be aware of other players.

Bloodhunt is an online battle royale, pure and simple. This means there isn’t much change in terms of going around the map taking out other players. Below the surface of that though there is more to how you would play. Choosing from the different player types/coteries gave quite a bit of variety to suit your playstyle and complement others if part of a team. As you complete daily goals and level up, you gain cosmetic items e.g. outfits and accessories for your character. I didn’t see much of it myself but the social aspect of playing in teams of three no doubt will also add to how much you would play. It is very fun and I can see myself sinking many hours into the game.

I really enjoyed my time with Bloodhunt as it does something a bit different with the battle royal genre. I know a little about Vampire: The Masquerade world from the TTRPG and video game and it seems quite faithful to the source material. The variety of character classes, weapons, etc means fans of the genre will find their style of playing. The gameplay is engaging and satisfying and it looks and sounds great too. Whether playing solo or in a trio, there can be many hours of gameplay if you enjoy the game too. I look forward to playing more and perhaps get an elusive AB negative blood dinner.

If you enjoyed my thoughts of the early access version of Bloodhunt then why not check out my review of Beyond Mankind: The Awakening right here.