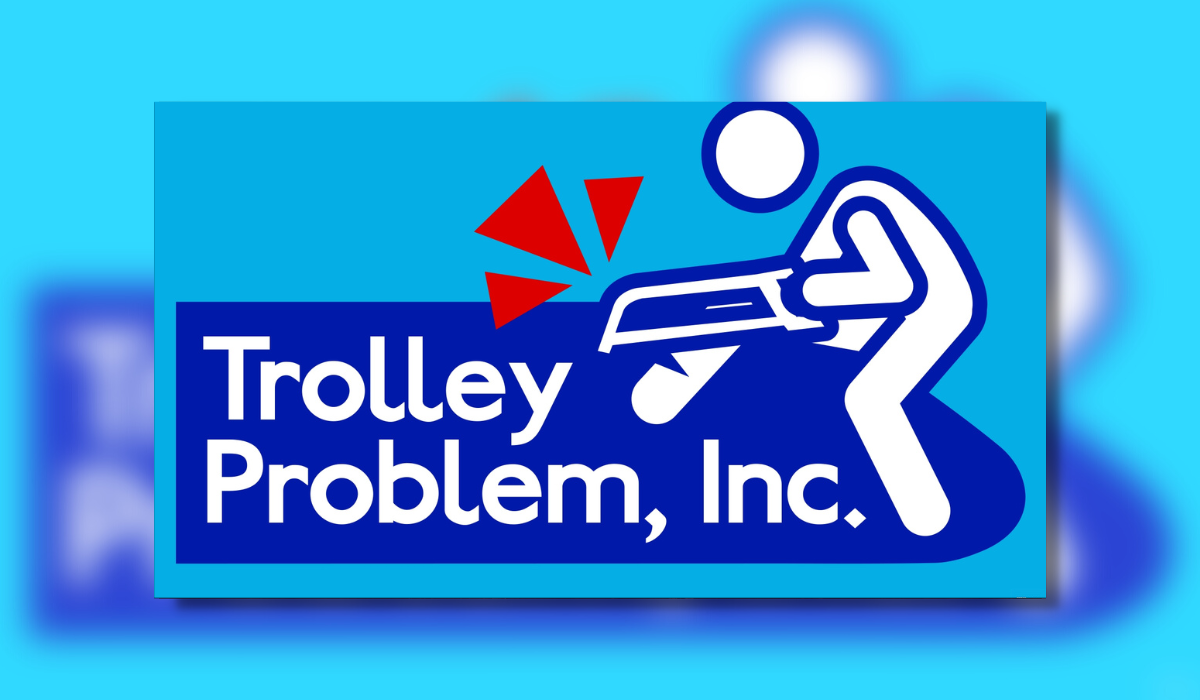 Trolley Problem, Inc. is a simulation/choices matter game built around the titular thought experiment. It is the debut game from developer ReadGraves & published by Yogscast Games (Helheim Hassle). I had heard of the thought experiment before but to experience it as a video game was quite something. I found when push came to shove making choices wasn’t as easy as I expected.

Trolley Problem, Inc. will change your definition of a dilemma!

I was excited to play Trolley Problem, Inc. and see what choices I would make. Feel free to comment and let us know what you think of the game down below.

Trolley Problem, Inc. is based on the thought experiment and various other scenarios involving ethical dilemmas between 2 difficult, perhaps even impossible choices. Seeing a runaway trolley on a train track on course to hit 5 people. Do you let it take its course or pull a lever to change the trolley’s course where one person will be hit instead? Testing your morality and what is the right thing to do. The game begins with you as a railyard worker and in a loose plot move to new jobs in different fields where new scenarios are posed to you. I didn’t question too much the career path from a railyard worker to a hospital administrator and even president. Your choices shape the character’s path in a loose story arc where some choices may come back to haunt you. Some choices even cut your journey short as I learned first-hand.

I did find myself struggling with some choices despite knowing it was all made up scenarios and people. The dilemmas all come from thought experiments spanning from ancient Greece to the present day. I was surprised at the number of scenarios but all are cited as well as a comprehensive reading list. I found myself even getting a bit drained making some choices in a row which is something to be aware of. It is easy to leave the game and come back if you need to. I won’t spoil many of the choices but I did recognise a few e.g. the trolley problem and prisoner’s dilemma. And some of the questions cover political & social issues relevant today.

The 30-second timer adds a layer of pressure as well as the narrator chides you regardless of which way you seem to lean. I had a love-hate relationship with the female narrator and her comments made me have an array of feelings from amusement to anger. I did appreciate seeing how I compared to other players and ReadGraves too and how much we agreed or disagreed. The game is very interactive in that way. There is also the option for co-op as well as playing via twitch where the viewers decide. I liked the inclusion of dyslexic font as the game is very text-based.

Trolley Problem, Inc. has all the graphics settings pre-set but should run the same on most PCs anyway. Visually the game uses relatively simple animated graphics showing each scenario. Built on the same template, often the animations changed to match the dilemma and position you were in. I enjoyed these design choices and found they made the game feel more fresh and engaging, especially with the more fantastical scenarios. In line with the British humour, there was a little bit of trolling but the game runs smoothly and I experienced no actual glitches.

The audio of Trolley Problem, Inc. came from a curt British woman acting as an advocate for whichever choice you seemed not to be going for. I found this did make the game more engaging with the dry and sarcastic sense of humour. This made some choices more difficult when I was already torn as she would almost advocate for the other choice.

Trolley Problem, Inc. isn’t an especially long game, one playthrough taking around two hours I haven’t yet but I can easily see lots of replayability in going back and making different choices. The co-op setting and Twitch integration too can see different outcomes to choices. And of course, for the achievement hunters out there, the game has 12 Steam trophies to unlock. In-game there are 6 rewards to earn from certain choices too.

I am not sure if fun is the right word but Trolley Problem, Inc. is an engaging and interesting game and unlike any, I’ve played before really. I’ve played games where they say choices matter but here they really do. I found myself easily making choices in one scenario to agonising over it in the next. I did come out of it somewhat drained but having gained some insight in return. In a relatively simple game, you may learn things about yourself and anyone else you may be playing with. Visuals and audio work well enough for the game, especially accompanied by the female narrator. And at first glance, it may seem like a short game but I feel there are lots to go back to and experience.

I hope you enjoyed this review and if you did then feel free to check out my recent review of Solasta Lost Valley. I have given Trolley Problem, Inc. the Thumb Culture Silver Award!