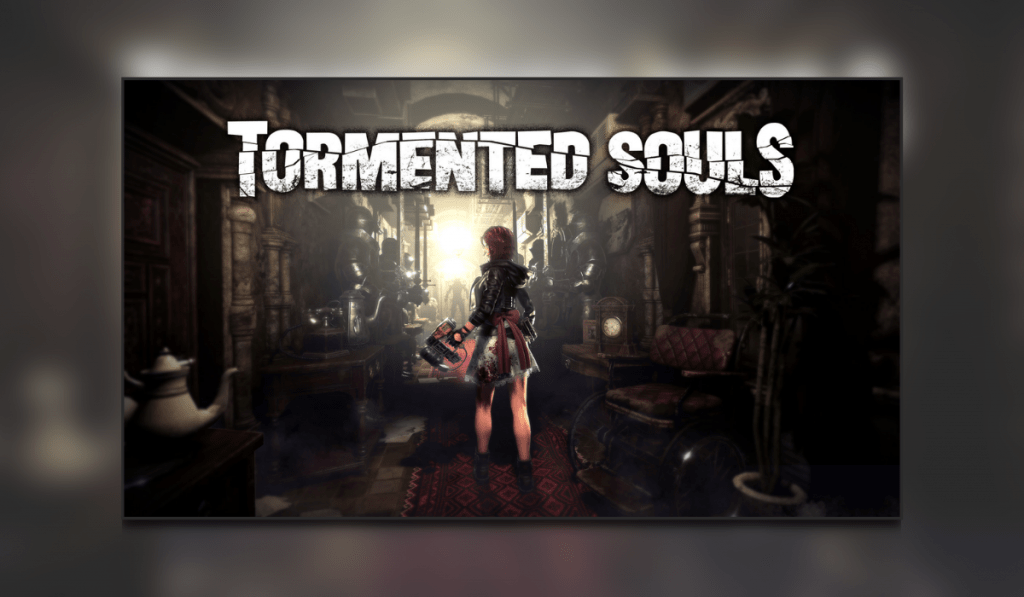 Tormented Souls is the latest game to release in the survival horror genre. The Resident Evil and Alone in the Dark games pay heavy inspiration to Tormented Souls. British publisher PQube and Developer Dual Effect bring us this game. Tormented Souls is available now on Playstation Consoles, Xbox Consoles, Nintendo Switch, and Steam. I reviewed this game on the PlayStation 5.

Can I survive the mansion or will I disappear into the darkness? Continue reading to find out. Check out my previous review here where I played Spelunker HD Deluxe.

Tormented Souls brings back that feeling of dread that came from earlier titles. It has a fixed camera position and some jump scares. It is a welcome return to classic horror.
Playing the role of Caroline Walker who has just received a photo of twin girls in a mall. These twin girls have gone missing. Caroline is lured to the town of Winterlake to find the missing girls. Our protagonist must explore a Mansion.

Caroline is knocked out and the game begins. The next scene starts with Caroline laying naked in a bath. Not only that she has a breathing tube down her throat and a bandage covering one of her eyes. After pulling out the breathing tube Caroline finds her clothes and approaches a mirror. Lifting the bandage and revealing that one of her eyes has been surgically removed. That is all I will say about the story, but it definitely a good story so stick with it.

To control our character we use analogue sticks to move around. When walking around in the game it will take you some getting used to. The analogue controls are somewhat difficult due to the camera angles the game puts on us.

With puzzles to solve, keys to find, and doors to at times “unconventionally” open you are never far away from trouble. With strange monsters in wheelchairs that roll towards you as you fire your nailgun at them and other hideous creations. Having to change from a lighter (to light up dark areas) and your weapon certainly builds the tension. Walking slowly down a corridor knowing you need to equip another item is crazy.

It’s not all doom and gloom, you do meet a nice friendly priest who is standing over a body looking to be giving last rites. He recognises you from the town, this is the first person who you meet and hands over the nailgun and gives you some advice.

Overall the game really does work well. Saving the game is done by picking up a magnetic film tape and using a recorder to save progress. A nice touch that is very similar to the Resident Evil typewriters.

The lighting plays a big part in Tormented Souls and it plays off of those fears. Flickering lights from the lighter, dim stairs and corridors add to the atmosphere.

However, a strange decision in the character mode of Caroline, that they didn’t go for a modern realistic character. It also wasn’t overly Cartoony. This ended with a good combination of the older and more modern approaches.

The mansion itself is a hive of activity. As you would expect there are different sounds aplenty. These aid at building up tension and really works well with the game. Unfortunately, I found the voice acting was very much a hit/miss for me and at times it felt more like an afterthought. Distracting from what is a good game, which does its best to draw you into its world and keep you there.

I feel a lot more time went into getting the balance of the in-game music and melodies to reflect the periods of tension and calmness in the game. For me, it was the area of  Tormented Souls that added to the enjoyment.

The game has multiple endings to unlock there is definitely some replay value to the game. Tormented Souls has a completion time of around 7 hours, that can extend to around 9 hours for full completion. With no difficulty options after that 9 hours is up there isn’t enough content to keep you coming back. I hope the team look at increased difficulty options, as in doing so they increase Longevity for players.

There is still a lot of puzzles within the game and are enjoyable. It is easy to get overconfident especially when you pick up more ammo.

When I first saw the Tormented Souls trailer it was a title that caught my attention. It didn’t disappoint and was enjoyable, though I do feel with a few extras it would have helped the game. I award Tormented Souls the Thumb Culture Silver Award.