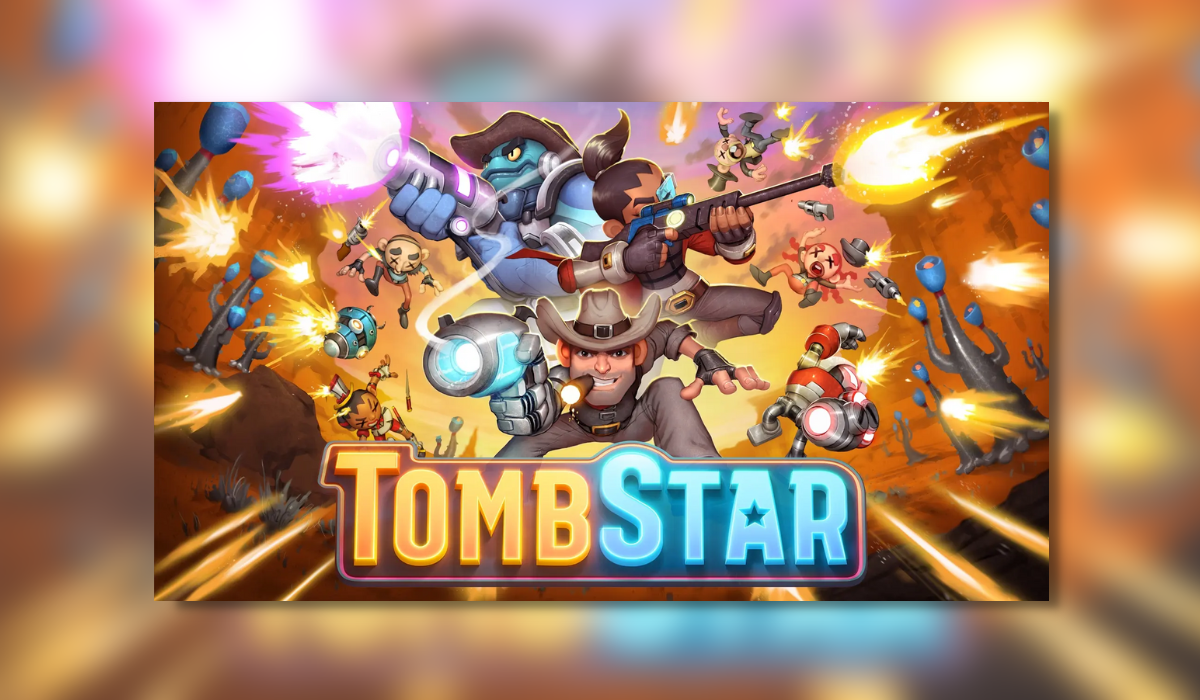 TombStar blazes a path onto Steam on July 20th. This new top-down, roguelite shooter brings a Space Western theme to PC. It has been in development by Andy Sum and Marcus Grambau, with publishing by No More Robots (Let’s Build a Zoo, Yes, Your Grace). Andy Sum is the co-founder of Hipster Whale (Crossy Road). Marcus Grambau is the founder of Valorian Games (Ink or Swim). This appears to be their first collaborative project for a PC game release.

The last time I wrote a piece for a bullet-hell, twin stick shooter type of game was for the Early Access Release of Uragun. I really enjoyed my time playing that game and interestingly enough I just learned that Uragun is going to be switching to a roguelite gameplay approach as well. If you recall from my preview of Rogue Spirit, the difference between a roguelite and a roguelike is primarily in the tangible progression of some form. TombStar joins these other two games as yet another roguelite gem I’ve had the pleasure of getting to play for Thumb Culture. Though I could name several other roguelites I’ve played, what are some of your favourites? Let me know in the comments after you read on about my time with TombStar.

TombStar brings Space Western to the hectic frontier of the top-down, twin-stick shooter genre. Your objective is to take back the planet from the criminal Grimheart Gang, working your way across various bullet hell landscapes. But first, you must choose your gunslinger (once you unlock them all). All three have their own unique stats and starting weapons. Each run will have you collecting various messages as well to unravel what happened on TombStar and the motivations for your characters.

The gameplay in TombStar is straightforward: Live, Die, Repeat. As with other roguelites, you are able to track your progression after every death in the form of an account level. Progressing up your account level unlocks additional characters (initially you only have one), weapons and perks that appear during your runs. You are also able to earn a form of currency that allows you to purchase and upgrade starting bonuses for your characters, such as an additional heart or a chance at returning a key after use. These starting bonuses aren’t charactered exclusive and you can use up to three at a time.

TombStar levels are completely random. One run you may have to defeat a boss or mini-boss before proceeding to the next level. On another, you may not have to at all. From what I found there are at least one perk to pick up and one weapon crate per level. You have to have a key to open both. Perks appear as a selection of two or three to choose from at a time. These can be upgraded using cards looted or purchased as well. Weapons you find or obtain from crates are of different rarities but require ammo to continue using.

I enjoy the flow of the gameplay in TombStar. However, there are times like in any roguelike or randomly generated content that you get some bad rolls and aren’t able to progress as well as you’d hoped. Despite one of the first bosses that sometimes appears to be a major pain in the butt, the game seems to balance difficulty with progression fairly well overall.

TombStar is currently only available on PC and has a standard set of graphics options. Most of my time in the game was smooth at the max setting so I didn’t have to adjust anything. The graphics for characters and animations are relatively simple as well. The rendering of them (or smoothness/style I guess?) reminds me a lot of Uragun. Each of the level zones isn’t overly complex either, with only minimal flair added in that can be rolled over or run into for no real purpose. There are some objects though that work to block projectiles until they are blown up.

The audio track in TombStar is not exactly memorable. As with other similar games in the genre, there is a primarily constant techno-type beat. It almost sounds as if they have tried to add in a sort of Western vibe to the track. But again it doesn’t make it stand out enough to add sufficient flair to the game in my opinion. Sounds for weapons, explosions, etc are all fairly standard as well. I will give some credit though for the audible cues for the different types of enemies and the noises they make when enraging. It gives me fair warning if they are just off-screen.

TombStar can be playable for as short or as long as you like. It really just depends on the player honestly. Thus far I am only at account level 20 and the last badge (starting perk) to unlock doesn’t become available until level 57. Hopefully, by the time I reach that level, I’ll be able to advance further than just the first three levels. I’ve got quite a ways to go so I’ll definitely have to put in more time.

TombStar looks and feels a lot like other top-down, twin-stick shooters. But I feel it also has its own uniqueness in the setting and lore that gives it enough of a bump to make it competitive with others like Enter the Gungeon or even Hades. I could easily see this game being playable on consoles or even mobile at a later date. I’d say I enjoy it just as much as I did Uragun as well. So for that matter, I’d give TombStar the Thumb Culture Gold Award.