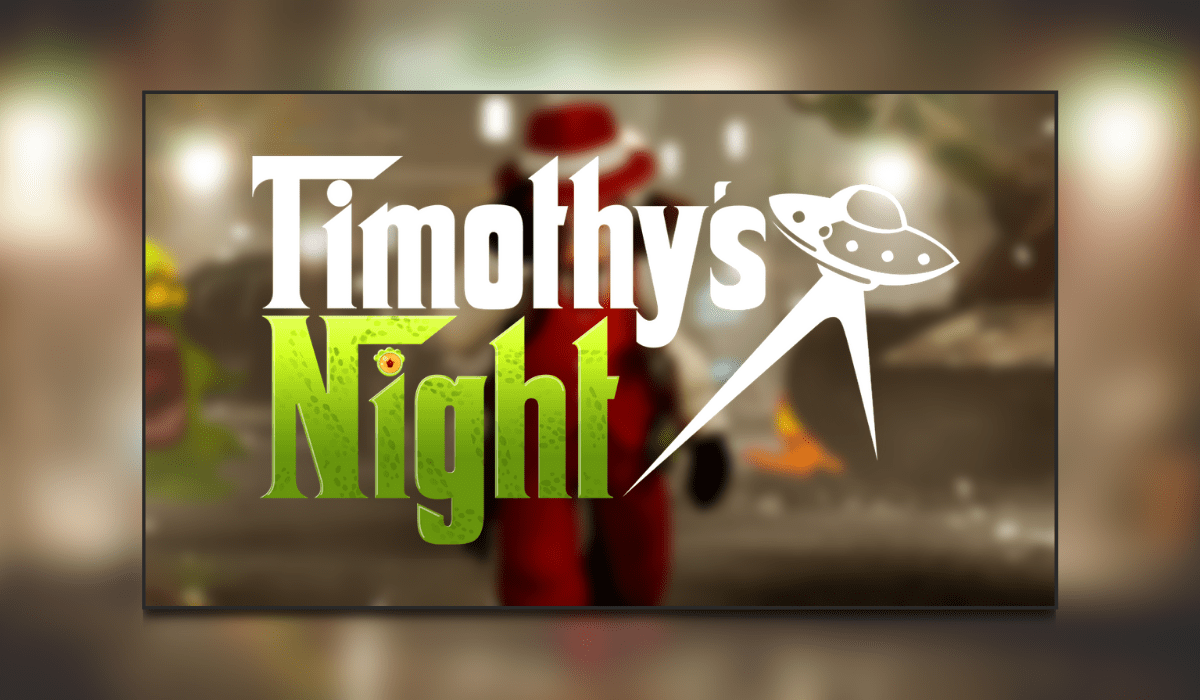 Welcome to my review of Timothy’s Night on the PlayStation 5. Wild Sphere Games both developed and self-published this game. We play as an oddball gangster known as Timothy, who must save his city named Little Fish City from an alien invasion. The game is of the third-person perspective and is an open-world shooter with similar traits to games like Grand Theft Auto, Mafia, and Saints Row. The game is available now on PlayStation 5.

Fun fact about this game, this is actually an expanded version of Timothy vs the Aliens which was on the PlayStation 4. So will Timothy have a good night in my review? Or should he have had an early night watching the telly? Continue reading to find out. You can check out my previous review here where I played the retro-inspired first-person shooter, KUR.

We start the game off by being introduced to some locals, just before the alien invasion takes place. Timothy thinks all is well on this evening, with the exception of the constant rain. Unfortunately, that’s not the case for him. Aliens are about to invade his city of Little Fish, in full colour I might add. Whilst trying to save the city of Little Fish, Timothy must get into The Grandfather’s mansion to defeat the aliens, but along the way, we must first complete a bunch of quests. Of course, I don’t want to delve into the story too much, but there’s certainly quite a bit to do in this game.

So as mentioned above this has similar traits to other open-world games such as GTA, Mafia, and Saints Row. By this I mean you have an open world to explore on foot, or by car should you wish. Once you’ve unlocked the key to using them that is. We have a handful of weapons to unlock in Timothy’s Night, which is great because you’re going to need them. We start off with our trusty 6 shooter revolver. Further into the game, we can unlock a shotgun, a more powerful revolver, and the gangsters favourite, the Tommy Gun. We also have some other weapons such as grenades available in our arsenal.

The gunplay in this game is fairly simple, L1 to reload, L2 to aim, R2 to shoot. Basic, but effective. Same for driving. You won’t do much of it, but the handling is pretty good compared to a handful of other games. Although the map is fairly large whilst on foot, it won’t take you long at all to navigate from one side to the other. As you can see below, it’s a good size for on foot but not so large when in a fast vehicle. The player also has a power that allows them to slow down time. This is called Hyper Speed and allows you to move at a normal speed whilst everything else is slowed down. This can be upgraded by finding activist aliens who are hidden around the city.

Also in the game, we have collectibles. The citizens of Little Fish will appreciate these. Smaller side quests in the game are completed by finding these. For example, the local courier needs our help finding his parcels. Keep your eyes open once you’ve triggered this side quest as there are 30 of these to be found around the city. Others involve you finding a number of hot dogs and also some fish. It sounds random here. But when playing the game, you will understand.

Another example of a side quest is helping Elizabeth save her restaurant from the aliens. It’s a basic shoot-out between you and a bunch of aliens, they spawn in waves so it’s not so tough. It is fun though.

The game does support Haptic Feedback and Adaptive Triggers. This game does a great job of using those features in the DualSense controller.

The graphics are actually very impressive at times. Unfortunately, when roaming the city the game seems to run around 30fps at all times. When inside a building such as Elizabeth’s restaurant, the game is buttery smooth, easily hitting a solid 60fps. This doesn’t defer away from how fun the game is though. Take the rough with the smooth and you’ll appreciate this game, a lot.

One thing I love about the graphics style of this game was how it has a noir setting for the most part. The very brightly coloured aliens stand out a mile in the game. This is kind of cool if you ask me. It’s a very good idea and quite unique from what I have seen in games.

The sound effects in Timothy’s Night are good, they suit the game very well. The music is good, however, it does get a bit tedious after a while. There are also no options to turn down the music volume, or even disable it. Which is a little disappointing, but it’s not the end of the world. The music actually reminded me of Tropico 5 for some reason, even though this is 1920s themed music.

This game will last you around ten hours. Timothy’s Night has 28 trophies to be unlocked, including the platinum, for the hunters amongst us. Of course, this will help add time to the game, should you wish to go for these.

Timothy’s Night was a very pleasant surprise for me. I thoroughly enjoyed this game. I experienced a couple of graphical glitches, one of which I couldn’t seem to get around as it seemed to save itself into my game save. The on-screen mini-map seemed to freeze for me. My objective arrows were moving around, but my character and the actual mini-map were not.

Please don’t let the trailer put you off because I watched the trailer for Timothy’s Night and thought to myself that it didn’t look that great. However, upon playing the game I found a very humorous and enjoyable game for all to play. I give Timothy’s Night the Thumb Culture Gold Award.