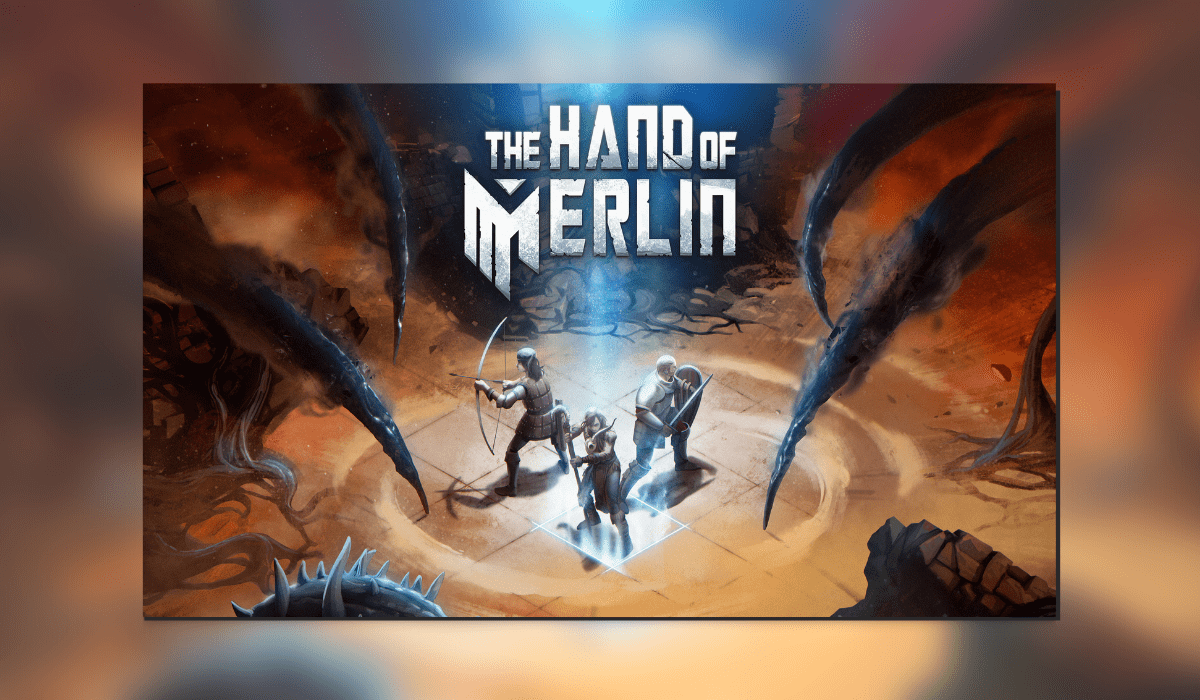 Knights, archers and wizards circle around for I, Jas of House Thumb Culture, have been recently spending my time on turn-based rogue-lite RPG The Hand of Merlin.  Currently available on Steam in early access, The Hand of Merlin is developed by Croatian-based Room-C Games and Croteam.  Although loosely based around the Arthurian legend, this is certainly a game with a slight twist!

The Hand of Merlin – Arise and arise a lot more!

Can you make the treacherous journey with the holy grail or will you be killed by the local yobs or alien monsters?  Yes, you heard me correctly!  Game on!

When I first had the opportunity to review The Hand of Merlin, the first thought that I had was of commanding a gallant King Arthur and his comrades X-com style across an olde world land.  Little did I realise quite how X-com this could become thanks to a split in the celestial gateway leading to alien monsters, known as Abominations, appearing across the medieval lands of Albion, Marca Hispanica and Al Andalus!

The opening narrative, spoken by Merlin himself, is certainly some beautiful storytelling and completely sets you up for what is about to unfold.

You start your quest selecting from either “Easy” or “Normal” difficulty and are then prompted to form a 3 person squad.  The initial classes are Warrior, Ranger and a Mystic with 6 additional heroes that remain locked until you complete specific challenges.  As with any game of this genre you have unique attributes and starting skills per character.

Unlike many other turn-based games that I have played, The Hand of Merlin features no manual save facility, therefore any mistakes cannot be undone.  Although there is an autosave so that you can come back to where you left off, this is only for the current game session.

Beginning in the City of Camelot with a small supply of gold, food, mana and renown, your goal is to reach Jerusalem with the Holy Grail in order to save your world.

Each game map is split into nodes that allow for various interconnecting paths to be chosen on the way to the end location.  Every move to a new node costs food that can be bought along with other supplies at marketplaces that you come to.  At each node a scenario is displayed to you via your journal book.  On some occasions, you will have a choice as to how you proceed, leading to a chance percentage situation of whether you succeed or fail.  This can influence the world around you.  I actually found this really nostalgic having been brought up with the iconic Ian Livingstone Fighting Fantasy novels as a child.

Carefully plotting your path on the map is crucial if you are even going to succeed. On my first run I managed to plough straight into an area that was rife with corruption (monsters) and a threat level of “Extreme Danger”.  It could not have been worse!  It is worth noting that once you have committed to travel to a node you cannot backtrack to rewind your mistake.

When it comes to warfare, your squad is thrown into relatively small maps, a little similar to Chimera Squad with a focus on quick turn-based combat.  You must very quickly view your surroundings for cover and scope out your enemy for strengths and weaknesses.

Each of your party, as well as the enemy, have both a health and shield bar that needs to be vigorously watched.  When it is your turn you have 2 actions that can be used to either move, attack and defend as well as select unique abilities such as overwatch and the casting of spells.  With cooldowns to watch out for it is up to you to plan and strategise effectively.

If things do start to go a little south, guardian spells that are unlocked before the game via Merlin’s Core (looks similar to a tesseract) can be there to save you.  The spells here are unlocked via Essence that is awarded during the game and any of your units can cast depending on whether you have any mana or not.  For me, restoring +8HP mid-combat was a godsend when facing off against the Abomination early on.  As the game progresses any character level-ups that you acquire are reset once the game is over.

Each of the battles leads to a conclusion whereby you have either won or lost, allowing you to ultimately carry on your journey or have to restart the game.

The journey really engrosses you as you begin leveling all of your characters up and selecting from a host of additional skills to bolster their combat ability.  Both the healers and market places that you discover each come into their own as you spend your well-earnt gold buying new armour and weapons as well as restoring health points.  It is worth noting that armour points are restored after every successful battle.

The Hand of Merlin looked and ran very well on my Nvidia 1660 Super with smooth animations and a clear detailed game map as well as dynamic effects during combat.  I liked how when you were in the corrupted areas the plant-like tentacles swayed around through windows and crevices in the surrounding dimly lit environment.  In addition, the sketches in the journal are a work of art.

One thing that would have added to the experience is the ability to rotate the camera.  I don’t know about you however I get a better feel for where to move to and shoot from using a rotating camera.  It does not distract from the gameplay and for me is purely something I am used to when playing other turn-based games.

When it comes to sound and music it is spot on.  As mentioned before, the opening video is fantastic and the voice acting of Merlin immediately makes you think of a powerful wizard due to the similar tones coming through the speakers, reminiscent of Gandalf from LOTR.  During the actual game, voicing is actually at a minimum with the majority of the narrative simply text read by you from the Journal as it pops up.

The soundtrack by Old Sorcery is highly atmospheric and clever given the game story.  The blend of medieval instruments to give it that knights of the round table vibe twinned with electronic overtones manages to successfully create the right kind of music.  I loved how the music ramped up depending on the scenario, heightening the tension of it all.

The Hand of Merlin is not a game that you will complete easily on the first run due to the learning curve.  That said, if you are a tactical overlord then maybe you will probably do it somewhere between 2 to 4 hours.  When traveling between nodes there is not always a battle to be had if you make the correct decisions, this allows for you to rapidly traverse the map.  The longevity comes into it with the 6 locked characters as you will need to complete specific challenges in order to unlock them and be able to use them on your next run.

If you enjoy turn-based games as well as medieval sci-fi horror then The Hand of Merlin is definitely one for you to pick up.  For me, the pull was that it was based around the myth of King Arthur and Camelot, something I have enjoyed fondly since I was a child.  The integration works well to give it the abomination monster twist while remaining true to the D&D style game mechanics.  Check out the trailer below and see what you think!

The Hand of Merlin receives the Thumb Culture Gold award!