The Division 2 is here finally and as you all probably know this is Ubisoft’s latest work. So with nothing else to say let’s dive straight in shall we? 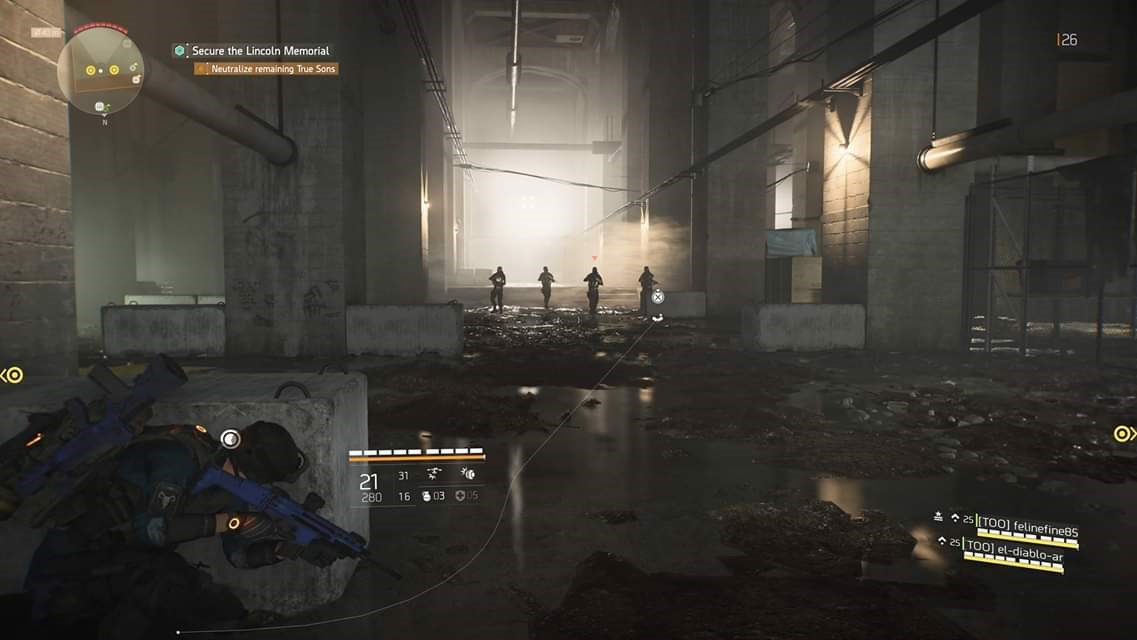 Danger Around Every Corner

The Division 2 is a tactical cover to cover shooter. You can choose to go in all guns blazing….. but why?

I’m sure everyone has played the first game which was set in New York with a smallpox epidemic and if not then where have you been? Well anyway The Division 2 is set in Washington DC and smallpox is no longer the issue but instead you now have the green poison. Lovely isn’t it? 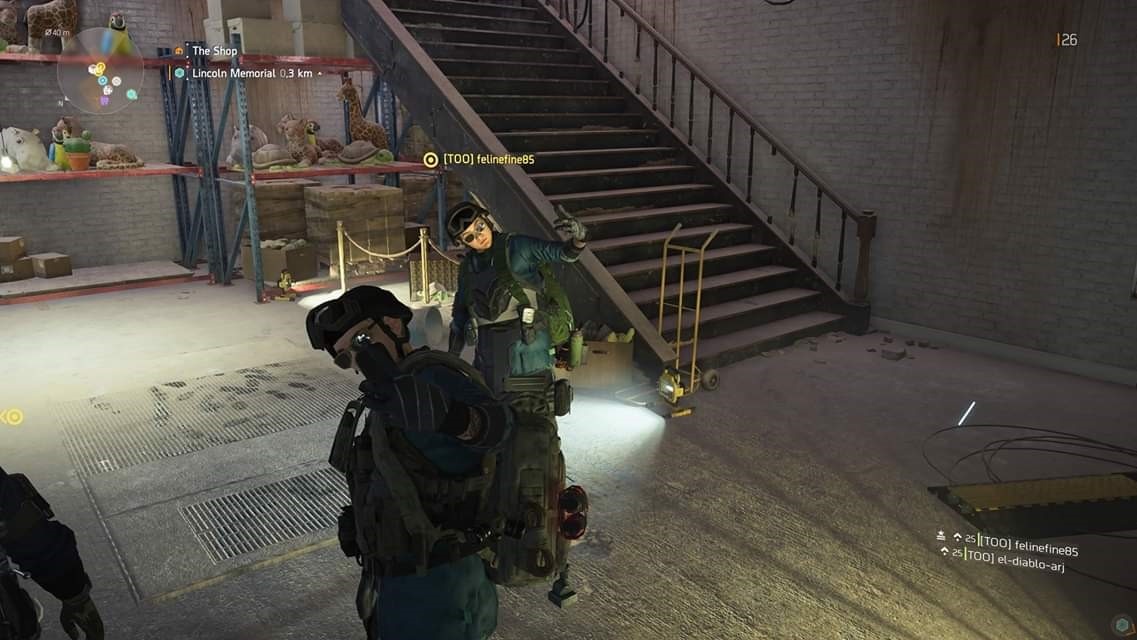 Taking Selfies With A Clan Member

Story-wise this isn’t as good as the original Division game. But this is a beautiful game with a really well thought out open-world that begs to be explored. Your choice of weapons vary also depending on how you play the game. In the original, I was very much a sniper and loved my Marksman Rifle. However, in The Division 2, I found myself in love with Assault Rifles and a Sub Machine Gun as my primary weapons. I have noticed a lot of people using Light Machine Guns more than anything in this game from my time playing in groups and from my dark zone experience.

The principle gameplay for The Division 2 has remained the same. Move from cover to cover killing enemies and exploring for collectables, food, water etc. That seems a cruel way to explain this game as it has so much to offer. Let’s face it though, it’s a tried, tested and loved gameplay experience that most people love so why change it? 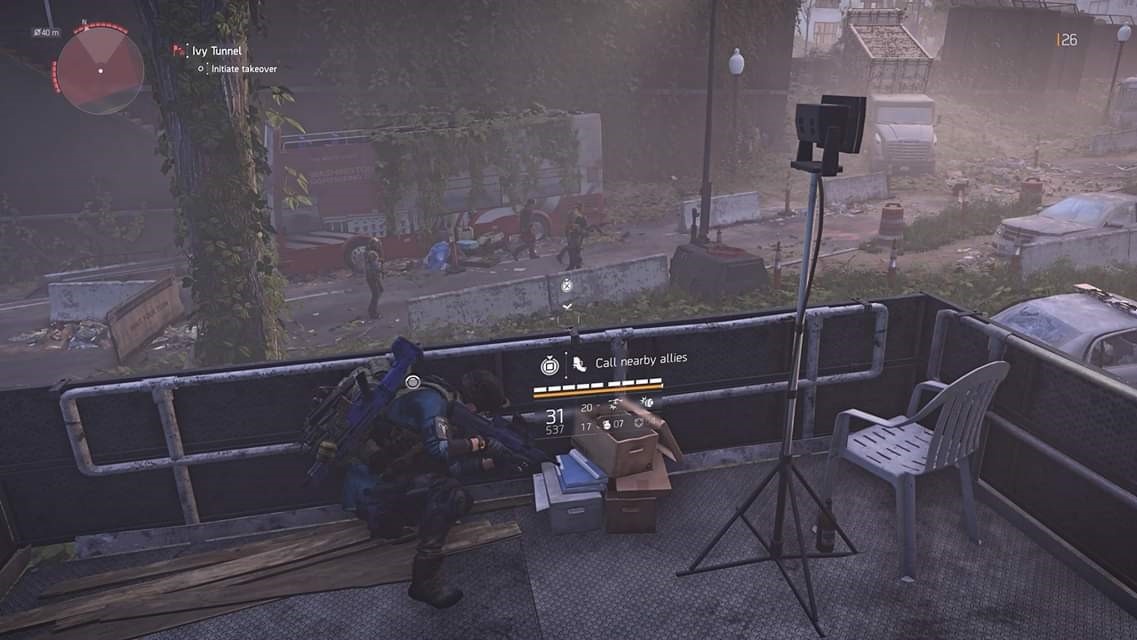 There have been some slight changes to the gameplay. For example, you can now join people in the base of operations, which is good for me. If a group member needs help I no longer have to guide them over the mic for where to go, I can just show them. There is also a clan feature. This is an excellent feature which I love. There are weekly clan challenges to focus on along with the normal gameplay. The more you and your clan play the better the rewards for clans levelling up. Again this is a welcomed teamwork bonus that was missing from the first game.

The dark zone is back in The Division 2  and is a major improvement from the original dark zone. In-fact there are 3 dark zones to explore now. So no excuses to get out there and explore. You have to be cautious in the dark zone. There will be other players in here and you have no idea if they are friend or foe. Personally, I like to try to remain friendly here because you never know when you might need help after being outnumbered by players or npc’s. If however you do kill a player you will go rogue and everyone will start hunting you down. Best thing to do there is to stay on the move, don’t hide in a single spot unless you can bottleneck the enemy into a trap. 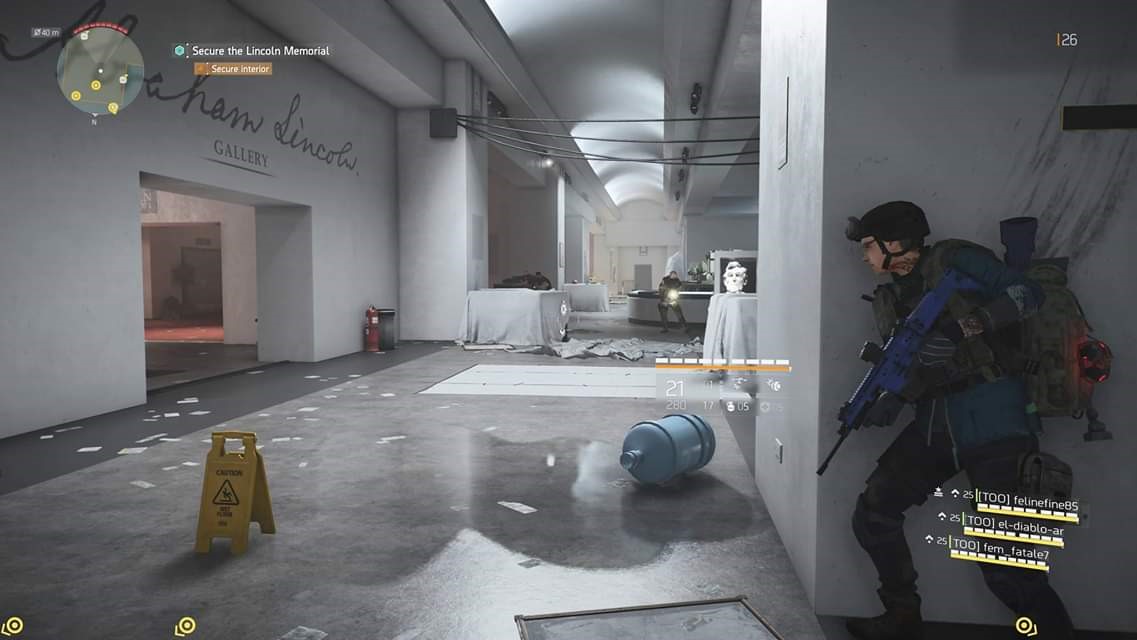 The end game is where this game really comes to life. There is so much to do, you really can’t get bored. Ubisoft really pulled out all the stops for end game and for that I praise them.

Simple things within the game also make a world of difference. Did I mention the animals roaming or flying around the city? I had an experience just the other day while roaming around solo exploring. As I was running down the street on my right-hand side, what did I see? A deer running alongside me. Yes this is trivial, yes this is a game but it felt wonderful at the same time. 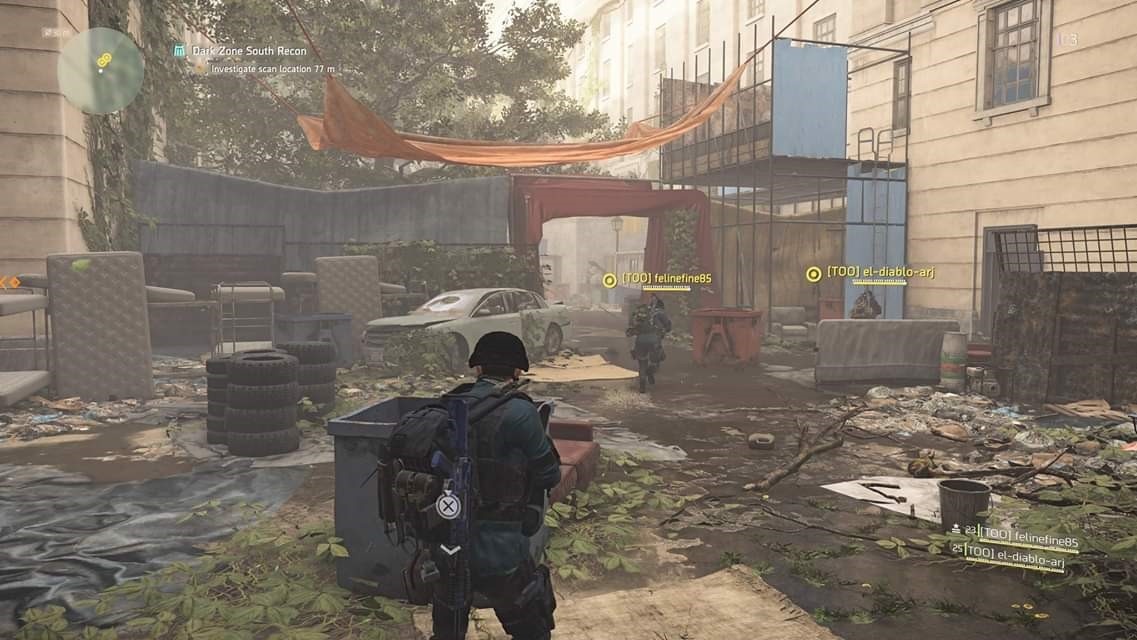 There is so much about this game that I love its hard to fit it all in. Elite Enemies have armour but now if you focus on this you can destroy individual armour pieces to create weak spots. Turrets can be taken off-line now as they also have weak spots. I won’t tell you where as that will spoil all your fun. The amount of options you have available to customize your arsenal is immense. Each attack power now has its own tree of skills to utilize. Each attack power now has mods that can be attached. The possibilities in The Division 2 are almost endless. 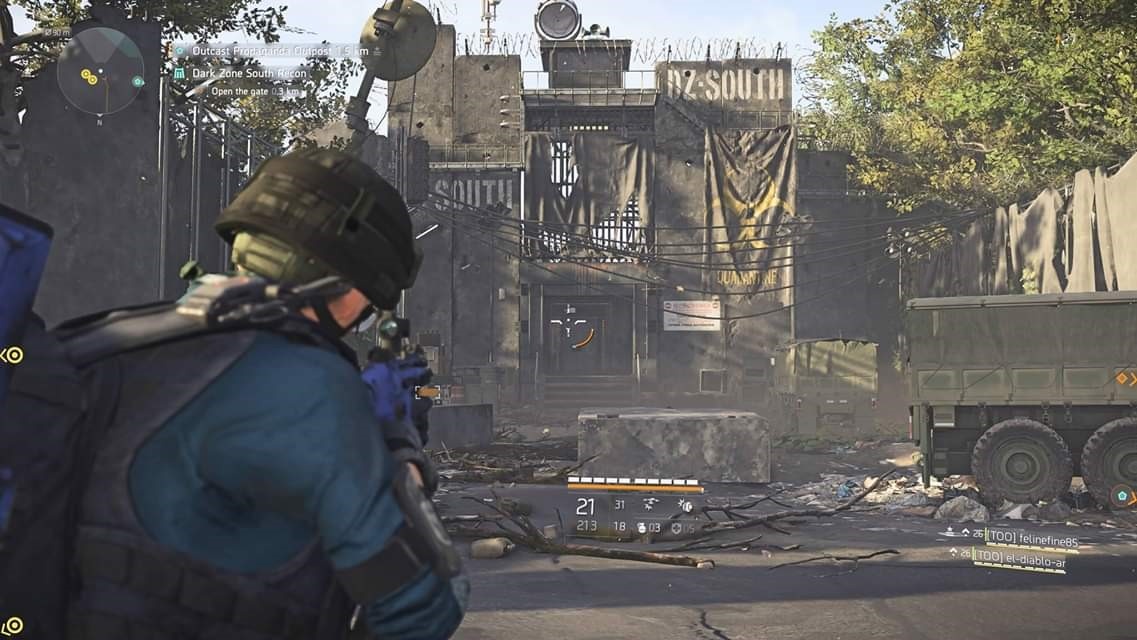 The Division 2…. holy cow!!!! Graphically this game is stunning. I mean it’s really beautiful. Graphically I haven’t had any glitches at all. I’m sure some people will have had issues somewhere down the line. Personally, for me my experience has been perfection. The lighting, the shadows, the details, the textures. Everything is amazing I can’t think of another way to describe it. 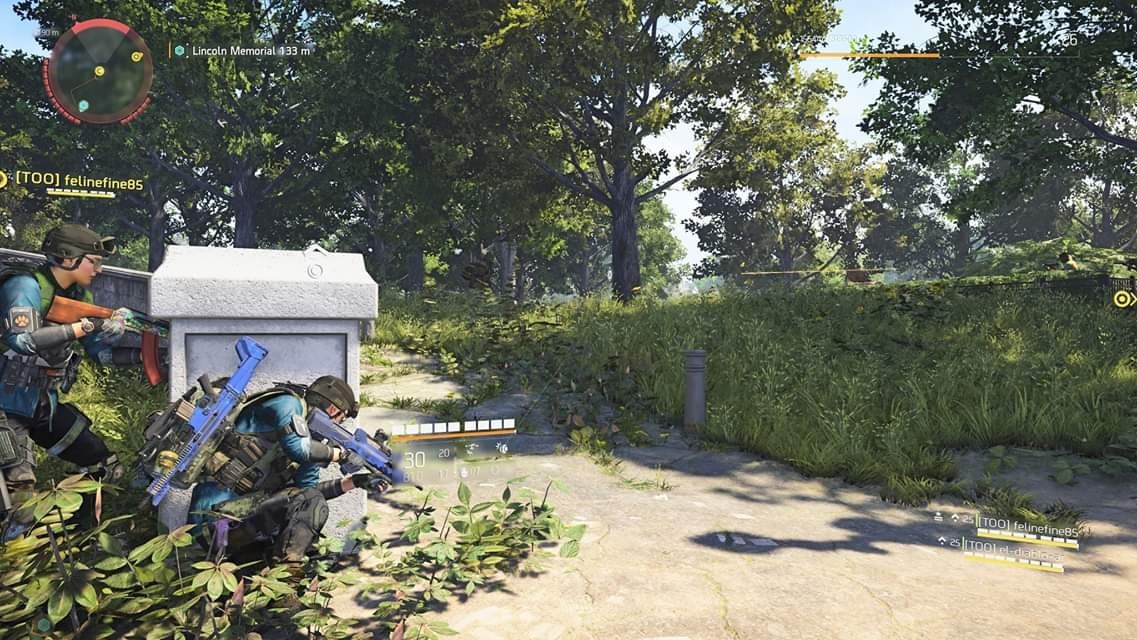 Relaxing Time In The Park

Again The Division 2  does nothing wrong in this area. The gunshots sound perfect according to whichever gun you use. Automatic Shotguns sound like cannons with a deep boom with every shot and quite terrifying to hear.

The soundtrack to this game is miles better than the original and really gets the blood pumping with its rocky metal overtures. 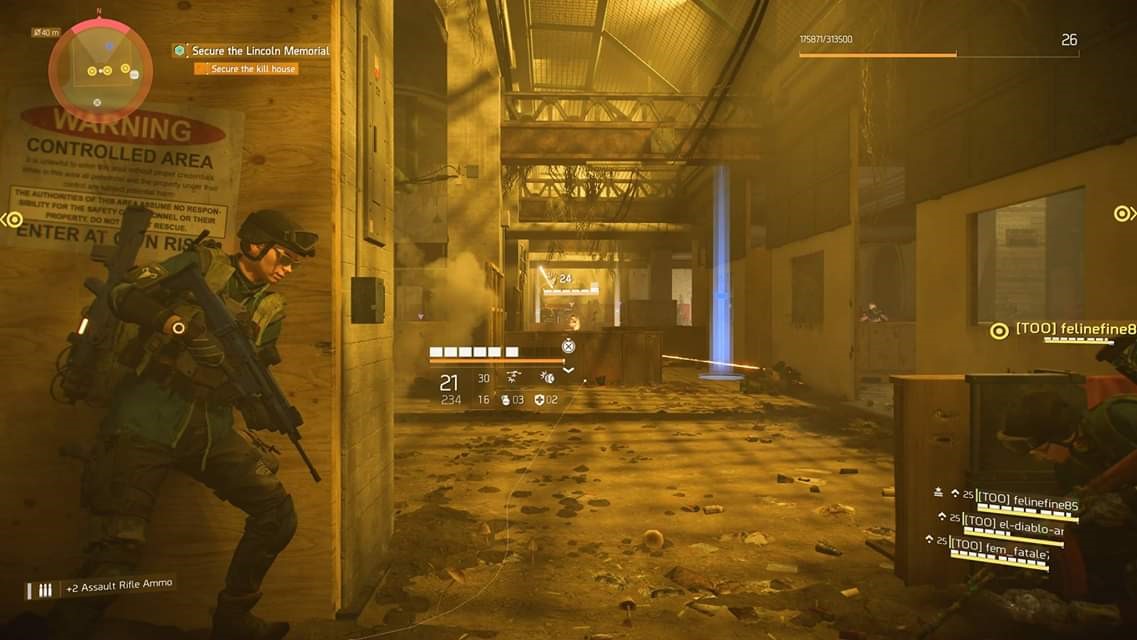 The Division 2 is a perfect example of how to fill a game with activities and not to sell itself short with a lack of content. There is an abundance of things to do here and never a dull moment in the game whether you are at the start of the game or in end game there is always something to do and I’d expect this to be a game you will be playing for a very long time especially since there will be more and more content added as time goes by. 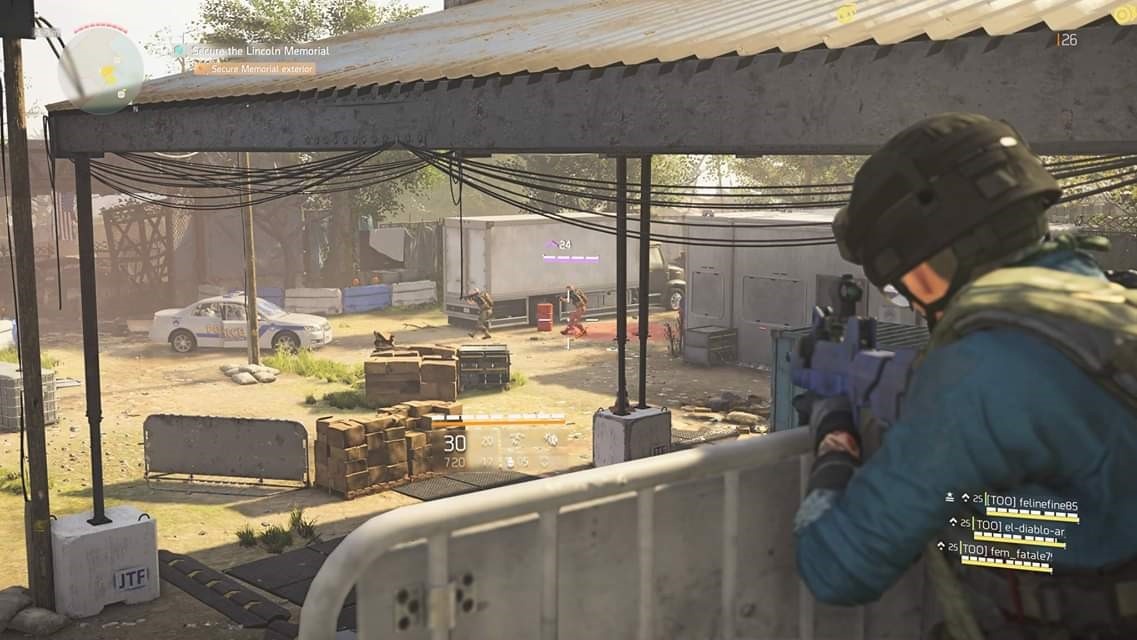 Watch Out For The …..BOOM

Lets not sugar coat it. The Division 2  is an excellent example of what a games company can do if they try. While I think Ubisoft have dropped in some really bad games over the last few years filled with bugs. This however for me is not one of them. Yes, I had one or two issues launching drones and turrets but since the last update I haven’t had any so I’m happy.

Reviewing this game was a joy and I will carry on playing this game probably long after my friends have stopped but I don’t care. I love this game and accept it for what it is. A cover to cover shooter with an absolute mountain of activities and content.

I award The Division 2 a Thumb Culture Platinum Award. This is a must buy game without any question.

I've been gaming all my life. Since the Commodore 64 and Atari 2600. It's a great form of escapism as well as a fantastic way to socialise with friends, family and people you might have never met in the real world. I love all types of games especially racing, fighting, rpg and FPS games. The only games I'm not a huge fan of are turn based strategy and turn based rpg games

Everspace is a single player 3D rogue space shooter by Rockfish games and is ...