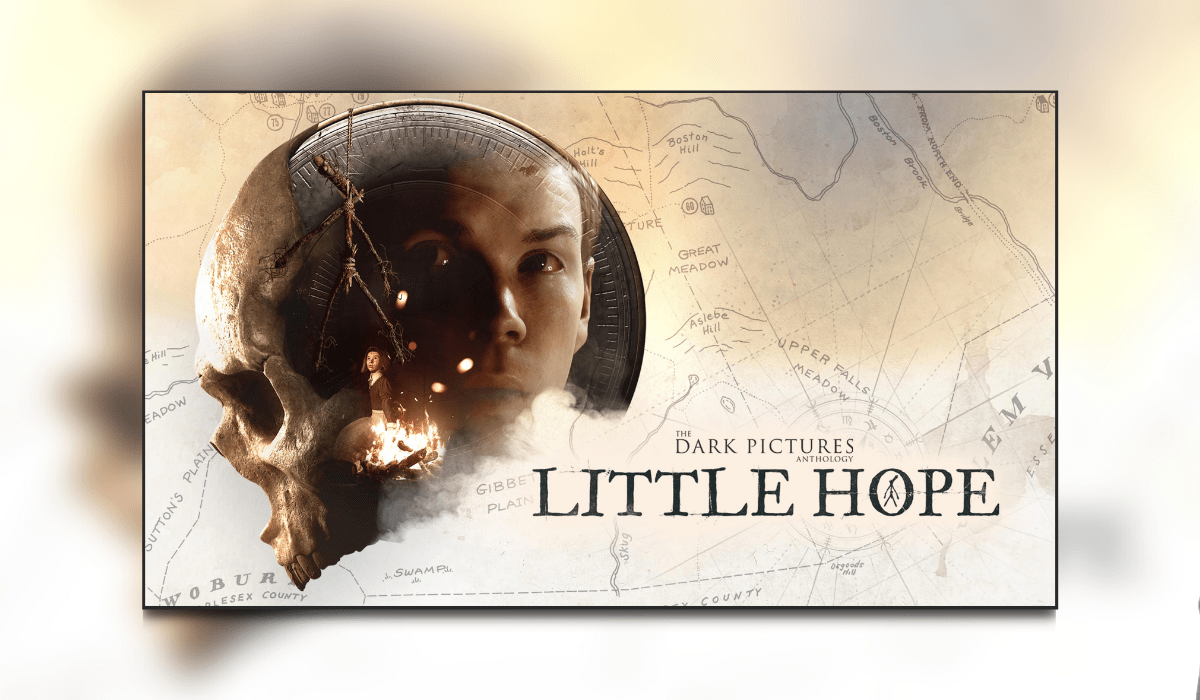 The Dark Pictures Anthology: Little Hope (we will just call it Little Hope for the sake of this review) is the second game of eight planned games in the series.  Developed by Supermassive Games and published by Bandai Namco Entertainment, Little Hope follows the averagely reviewed Man of Medan released in 2019, yet they are seemingly unrelated to each other in terms of narrative.  Little Hope released on 30th October 2020 for Playstation 4, Xbox One, and PC.

You have Little Hope on who can you trust, and who will you save?

Supermassive Games have been synonymous with the interactive horror-drama type game in the last 5 years seeing success with titles like Until Dawn and Man of Medan.  Little Hope seems to have taken a different path of the supernatural than it did in its predecessor.  While Man of Medal focused on ghosts, Little Hope chooses to play on your fears with witchcraft.  As such, it takes inspiration from many sources of actual history and fiction.  All throughout the game, there is a heavy presence resembling the Salem Witch Trials, with undertones from films such as The Omen, Hellraiser, and The Blair Witch Project.

So, to set the scene, you will play as four college students and a professor.  Whilst traveling through New England by bus, you become stranded in Little Hope, a town known infamously for its witch trials in the 17th century.  With the bus driver now missing, you need to find help.  As the engulfing all-pervasive fog seems to invite you into the town, it becomes clear that all is not what it seems.  There are lots of clues around Little Hope as to what happened all those years ago and as you play, you will flit between the two timelines.  This will blur the lines of reality and leave the characters interrogating their own minds as to what is real.

In between chapters you will have a chance to catch your breath and meet The Curator.  He serves as a reminder that your actions all have consequences.  Do you take that weapon, or give it to someone else?  Will you go with logical reasoning, or give in to your natural human instinct, curiosity?  Actions early in the game can have an impact on how it ends.  This is your story, and the characters’ fates are in your hands.

As well as investigation and decision making, there are action sequences in the form of quick-time events.  The developers really listened to the community when integrating these.  Fans of Man of Medan had brought to their attention that there was not enough time to react to the on-screen prompt.  As a result, a warning system has been implemented to inform the player to prepare themselves.  While you may think this makes the game too easy, it doesn’t.  I still missed a few and not getting a QTE right could mean the difference between life and death.

As a single-player experience, play alone and in the dark.  Because of my desensitisation having watched Aliens at the age of 6 (thanks Dad), I had to rely on the piles of brown trousers next to my partner to gauge how scary this game is.  But, unlike me, if you actually HAVE friends you can play through the story with up to 5 people, one assigned to each character.  This would make for a great “movie-night” style evening at home with local co-op (perhaps not during lockdown) or take it online and work together to get the desired outcome.

There are no qualms here that atmosphere and presence are that stars of the show.  Both the graphic and sound design excel here.  Firstly, it is dark.  So, so dark.  You feel like the characters do…lost with very…little hope.  The environments are tense and atmospheric with occasional light sources drizzling its way through the fog.  Monsters and character models are on point too.  The monsters are grotesque to the point that even when you think they are gone, you feel them on your mind hunting, preying, waiting.

If like me, you are used to horror movies then you will know when the scares are coming.  Though they are telegraphed in such a way, a few will still catch you off guard.  This is primarily because of the sound that accompanies the imagery.  It can be a faint noise to halt you in your tracks, or some wailing banshee scream.  Either way, it is executed brilliantly and hits its intentions with precision.

I played Little Hope on a PS4 Pro and experienced no graphical issues or bugs.

A single playthrough will only take you about 6 hours, but there is replayability with several endings all depending on how many of your characters you end up killing or saving.  It is definitely worth playing through at least twice.  I will generally try and save everyone the first time, and murder everyone in the second playthrough just to see how different the endings are.  Add in the multiplayer element and it can go further still.  You may want all your friends to die and would influence their decisions to do so.  Maybe that’s just me.

Little Hope features a cast of characters which you might recognise from film and TV.  This seems to be a Supermassive staple and it works well.  It makes the characters more relatable and you care about them that little bit more.  I found myself particularly fond of Angela.  The eldest of the group, a lady with a potty mouth and sarcastic wit.  The story I found very interesting as I have a particular interest in the paranormal and supernatural.  My only gripe with it is that it isn’t long enough.  The decisions have meaning and you may not see the result until hours afterwards.  The graphics are brilliant, though I feel the voice acting fell a little flat at times.  That said, it doesn’t take too much away from the game.  It has its scary moments though they do feel a little predictable.

I am excited for the next chapter in The Dark Pictures Anthology.  I award Little Hope the Thumb Culture Gold Award

If you enjoyed this review, why not check out my previous article here? 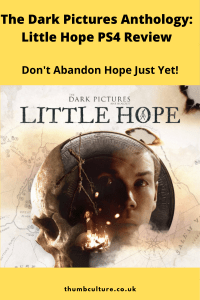