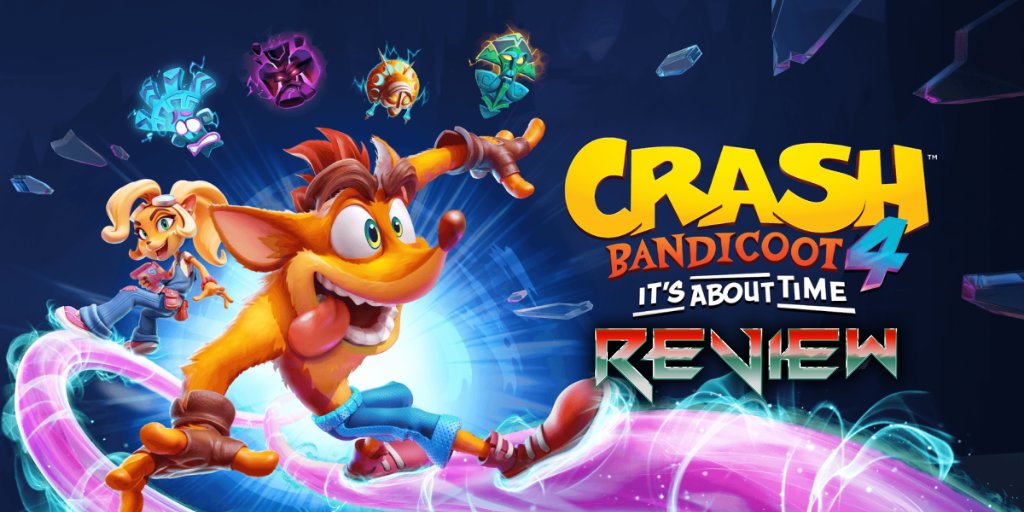 Imagine a world where The Wrath of Cortex, Crash Twinsanity and Crash of the Titans doesn’t exist.  Are you there?  Good!  For the purpose of this review, we will remain in this ideal world.  It isn’t that they are bad games, it’s just they are not good either.

Crash Bandicoot 4: It’s About Time is first and foremost, the long-awaited sequel to the 1998 PlayStation game Crash Bandicoot 3: Warped.  Since the days of being in the hands of developer Naughty Dog, it has moved about a bit but is now firmly in the grip of Toys For Bob.  Toys For Bob have had recent successes with the Crash Bandicoot N.Sane Trilogy and the Spyro Reignited Trilogy, so it seems only fitting that they take the reigns again for this original entry into the franchise.  Once again published by veterans Activision, Crash Bandicoot 4: It’s About Time was dedicated to Mel Winkler, the original voice actor for Aku Aku who passed away earlier in the year.

Crash Bandicoot 4: It’s About Time was released on 2nd October for Playstation 4 and Xbox One.  So, let’s delve in and see what this marsupial has in store for us this time!

Doctor Neo Cortex and Doctor Nefarious Tropy are up to their dirty tricks again.  You know, the usual creating interdimensional rifts in a bid to enslave the multiverse, run of the mill stuff.  Enter Crash and companions, Coco, Dingodile and Tawna and their search for the Quantum Masks to thwart the degenerate doctor’s iniquitous plan.

Crash games are infamous for their difficulty and as such offers two modes in which to play.  Retro mode keeps it old school with limited lives and having to search for extra ones.  Modern mode has the audacity to replace the lives counter with a death counter.  A stark reminder of how many lives you have lost and just how rubbish you are.  Although it does nothing to adjust the difficulty, it is a very clever way to appeal to Crash purists and newcomers alike.  Modern mode is especially handy and levels are longer than previous crash games.  As a result, individual level challenges are back, including “smash every crate”, “use only three lives” etc.  Completing these challenges will earn you various rewards such as skins for your characters.

Talking of challenges, a new feature in Crash Bandicoot 4 is the flashback tapes.  Collecting these tapes is an activity for those seeking the ultimate punishment.  This is for the sadists!  These tapes reference a time before the first Crash Bandicoot and act as a sort of uber-bonus level.  Challenging they are, impossible they’re not!  Another new and interesting addition is the use of special masks in levels.  These are to aid Crash (or Coco) in their level traversal in a variety of ways to manipulate obstacles.

Bosses are fun and very challenging in some places.  Crash is still spinning and sliding his way through levels, but there are some subtle but notable quality of life improvements.  Gone are the days of spinning away those precious wumpa fruits.  When you break a box, they automatically come to you.  Are you used to falling down pits over and over because you didn’t time your jump correctly?  There is now a highlighted shadow beneath Crash (which can be turned off) so you know exactly where you are going to land.  It’s the little things like this that make this a superb crash game.

There are some very interesting ways to replay the levels.  Playing in N.Verted mode essentially mirrors the level with some additional effects such as playing underwater or painting a blank canvas as you go.

Lastly, Crash Bandicoot 4 has local multiplayer!  The co-op mode called Pass N. Play harkens back to the old days of playing with your mates on the couch.  Up to four players take turns to complete levels.  If you die, pass it on.  If you hit a checkpoint, pass it on.  This can be set to however you want it within these parameters.  If competitive multiplayer is more your bag, you can choose Battle Mode.  Within Battle Mode, you will find the self-explanatory Checkpoint Race and Crate Combo, which is just a Checkpoint Race but with crate smashing.

I played Crash Bandicoot 4: It’s About Time on a PS4 Pro and experienced zero graphical or gameplay issues.

Crash Bandicoot 4 really tickles your eyeballs with a striking colour palette.  Crash games have always been bright and beautiful but Toys For Bob have really gone all out to bring Crash into the current generation.  Graphics are smooth and highly detailed and the animations are flawless.  Crash’s facial animations do such a good job of letting us know how he is feeling, giving him more character than ever.

The environments are spot on as well.  Not only are they highly detailed but it feels like a living world.  From changes to the lighting, little bugs running around and interacting with the inflatable Spyro rubber ring at the start of the first level.  These things are meaningless and have no bearing on the game, yet they add weight to it by making the world like it is really inhabited.  Subtle, yet effective.  I can say with my hand on my heart, this is the best-looking platformer I have seen on the PS4.

Award winner Walter Mair has been brought on for the original composition on this one.  His previous work includes the GTA series, Killzone: Shadow Fall, Splinter Cell: Conviction and the Total War series.   Mair sticks with Crash tradition of using world instruments such as the bone flute and Japanese shakuhachi to echo the environments.  Throw some seashells (yes, seashells are an instrument too) and you have a group of compositions that lend themselves perfectly to match the timbre of the game.  If you have played a Crash game before, then you know what the sound design will be like, very distinctive to its peers.

The main story will take up to 15 hours to complete, skill dependant of course.  For a platform game, I think that is a fair amount of time considering you can complete Activision juggernaut Call of Duty games in half that time.  But, there is a serious amount of replayability to be had here.  Essentially we have 100+ levels and a ton of challenges to complete, you could easily double or even TRIPLE the time you spent on the campaign.  And with the N.Verted levels, it doesn’t get boring.

Crash Bandicoot 4: It’s About Time as a platformer, is the perfect swansong of the generation.  Much like its original PlayStation counterparts, this has “future classic” written all over it.  Toys For Bob shows a real passion for its source material and has learned a few lessons since putting out the faithful N.Sane Trilogy.  What’s next from Toys For Bob?  The logical step would be an original adventure from Spyro right?  Here at Thumb Culture, we will keep our ears to the ground and as soon as we know…so will you. 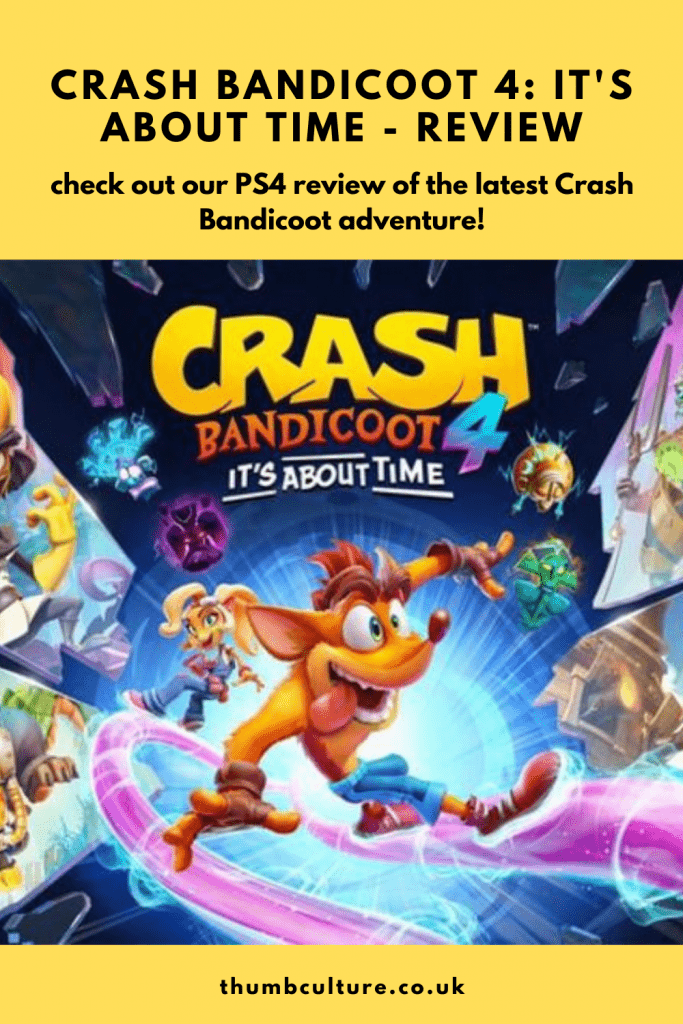 One thought on “Crash Bandicoot 4: It’s About Time – Something Old, Something New”