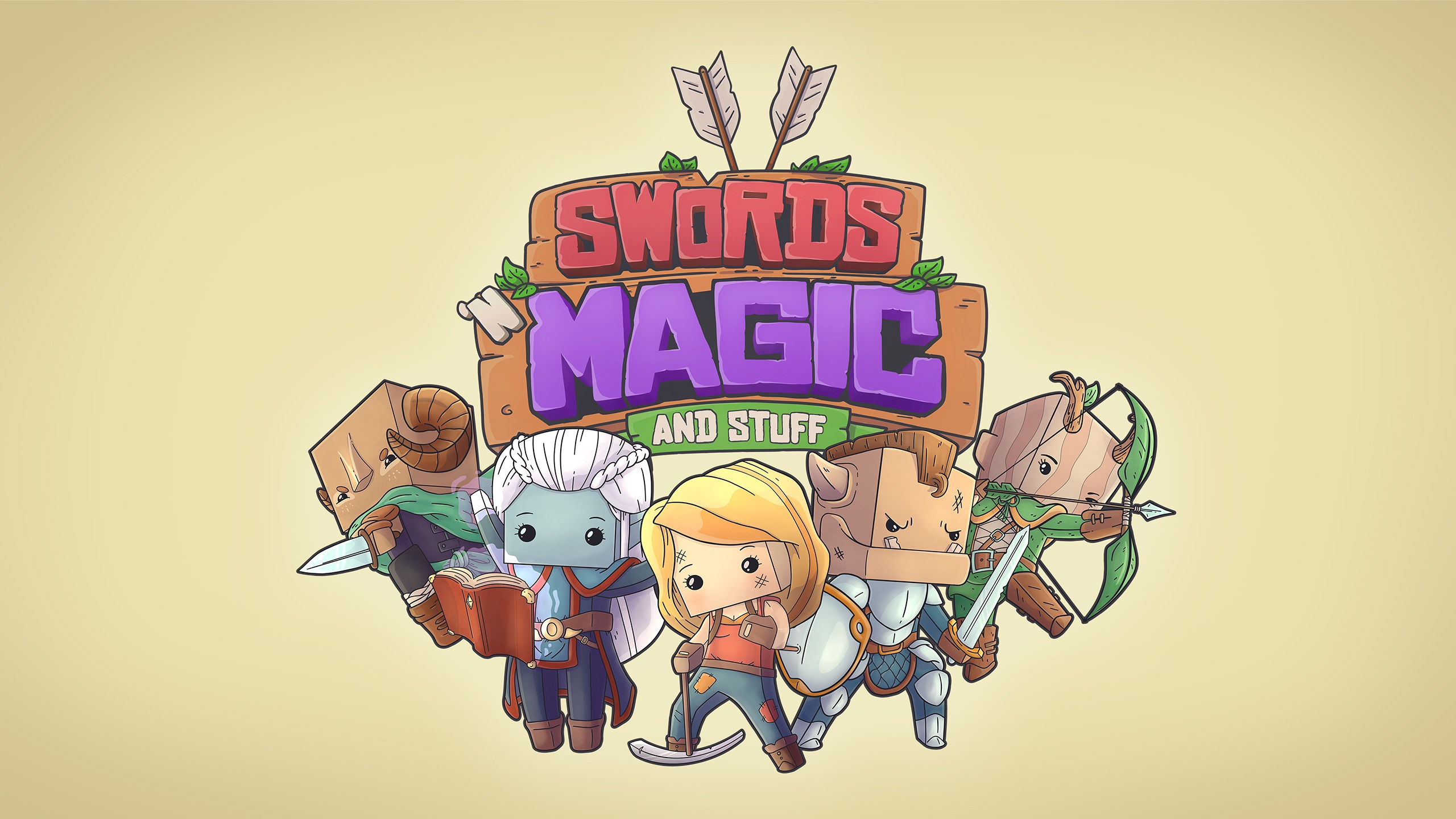 Developed and published by Kindred Games comes Swords ‘N Magic and Stuff. Made over two years by just three people; following Kindred’s vision and made possible with a very successful Kickstarter campaign. Kindred set out to make the kind of video game that could be enjoyed with people of all ages. Inspired by open-world fantasy RPGs like the Elder Scrolls series and sandbox games like Minecraft. Swords ‘N Magic and Stuff blends these elements and, like the title suggests, offers many options with how to play from slaying goblins to treasure-seeking.

Swords ‘N Magic and Stuff is still in alpha early access and so not everything was available. “Discover ancient ruins, hunt for treasure, defeat bosses and decorate your house in this immersive, handcrafted, casual online RPG.”

The game is available on Steam with the possibility of release on consoles in the future.

Swords ‘N Magic and Stuff combines the fantasy setting and lore rich world of games like the Elder Scrolls series and aesthetic of games like Minecraft. The game is set in Tirawyn, a fictional fantasy land where various races co-exist. All to some extent still recovering from some sort of a calamity years ago. The game begins and after some gameplay tips you are free to explore everywhere on the opening island.

Right away you get hints of the global calamity when speaking to people or through stories of that time. This opens up the game to be what you want from discovering the history of Tirawyn to completing quests & slaying monsters. Aside from tougher combat encounters you are able to go anywhere on the island as the game opens up to you. Around the island are ruins and caves which provide insight into the previous age. As well as learning history you can find legendary items hidden or long forgotten; deciding whether to wield yourself or if they belong in a museum.

The environment I have experienced, at least so far is clearly rich in detail and the story being weaved into the world. With the game at its current stage of development I only really got to scratch the surface of this so far. The alpha so far only has the starting island but introduces you to some of the various groups, from the archaeology society to a community of pirates. While dialogue is delivered through subtitles, the non-playable characters (NPCs) make up a colourful cast. Particularly a few of the quest givers who’s personality made up for the more run of the mill tasks.

Where Swords ‘N Magic and Stuff differs from other RPGs is that you are not limited in how you want to play from magic to melee with no pre-requisites to using magic or certain weapons. The upgrade feature comes from improving weapons you wield to become more specialised. You also have the option of duel wielding to allow more variety in combat and specialise further. Combat as a result is dynamic where you can snipe from afar, run in sword blazing or sneak around and avoid fighting all together.

For my playthrough I used a PS4 controller and while fighting monsters or animals I found the combat to be awkward and movement to be unwieldy. The mechanics of creatures when fighting also became repetitive very quickly. The exception to this being that different types of creatures attack differently. The in game map was of no use when playing especially for an open world RPG where it was only a broad outline of the island and able to see very little detail.

Swords ‘N Magic and Stuff has no manual save function but whenever you return to the game you begin in the same area with all your inventory intact. If you die in the game there is a truly interesting mechanic for respawning. Throughout the island are magical shrines which your spirit travels to and come back to life there or simply the nearest one if you don’t arrive in time. Reminding me actually a little of the lanterns in Bloodborne. The island I explored was relatively small but if the world is expanded as it hints then these shrines would be very useful tactically.

Swords ‘N Magic and Stuff being compared to Minecraft is in large part down to the graphical style Kindred Games went with. While the world isn’t made of cubes it does fall into that genre of games and, to it’s credit, in this imaginary world. The game visually is very all ages friendly and makes it work in this detailed and lore rich world that has been created.

The environment is stunning as I caught myself a couple of times just watching the horizon at dawn and dusk. NPCs I encountered are also well designed, both in appearance and movement, making them both distinct and memorable. One very memorable NPC was a satyr who as I passed his house, Gaelic folk music was playing and inside they were break dancing.

The change between day and night is well utilised as exploring has a very different feeling at night especially in the surrounding countryside. Areas to explore such as cliffs and hillsides are pleasant to look at and as detailed as any RPG. Monsters are still out there as much as daytime and with very little visibility to aid you the game keeps you on your toes.

Somewhat disappointing though were the enemies encountered, particularly the goblins. Monsters you encounter felt lackluster in appearance with little to distinguish different types of monster. Also Swords ‘N Magic and Stuff does suffer from issues such as one point where I fell through the world and restarting the game was the only solution. One side quest I began hit a wall when the NPC involved was nowhere to be found. These issues did pull me out of the game and slightly soured playing afterward in general.

The game is scored with a peaceful and melodic sound which is very fitting with the fantasy setting. It almost becomes part of the setting itself and makes the time journeying and exploring very pleasant. The environmental sounds from combat to riding a horse add to the experience of being in this world. The more fantastical elements such as casting magic are stylised to work in this game for all ages.

The dialogue of Swords ‘N Magic and Stuff is delivered through text rather than verbally and characters and creatures are silent for the most part. This design choice to rely on score and sound effects adds to experiencing the environment. That also takes away from conversations with NPCs and left feeling less immersed in that sense.

In the current stage of development there is only the tutorial area but still gave plenty to do and see. Like other RPG games and hints given by the NPCs you come across there is certainly a larger world to the game. Around the beginning area are tidbits of lore and world building hinting at much more. What I have experienced so far is no doubt the tip of the iceberg and I look forward to seeing more.

Swords ‘N Magic and Stuff is a fun RPG and can see being suitable for gamers of all ages. I am interested by the lore of the world and the potential there as the game is developed. The environment and visual style works well for the fantasy world and the ability to immediately play how you want. However the game was let down  somewhat by the clunky combat of the game and glitches meaning gameplay hit a wall.