Surf World Series by independent games developer Climax Studios is a daring plunge into the extreme sport of, you’ve guessed it! surfing.  With my surfing expertise comprising of a few hours playing Sega’s Soul Surfer down the arcade and an attempt at the sport while on a stag do down in Newquay (nb: definitely not a good thing to do with a hangover!) I was excited to have the opportunity to don my long banned Hawaiian holiday shorts and start yelling “Cowabunga” and “Radical” around the room.

Surf World Series begins with a lovely fullscreen video intro featuring professional surfer Tom Lowe explaining how surfing makes him feel set to stimulating visuals of crashing waves and surfing moments.  It reminded me a little of how the Tony Hawks games used to begin however in this instance the soundtrack is more calming as opposed to the punk rock anthems of the TH franchise.

Game modes vary between Free Surf, Surf School, Events such as competing in tournaments as well as the option to customise your surfer and play online.  Online mode boasts a tournament mode (big battle, wipeout and survival) that is playable with upto 15 players however at time of writing Surf World Series was unreleased so I cannot comment how this fairs.

Heading to Surf School, I begin with learning the tricks and skills that are needed to score some gnarly points when I am ready to start taking part in the events.  Based on the south coast of the UK is the training pool where practice waves can be tried out to learn the basics.  Now you would think that simply catching a wave would be an easy affair and yes, just pressing and holding the X button on the controller to get your surfer paddling with a wave is simple to do however releasing that X button to then stand up on the board successfully was my first hurdle which led to several failed attempts.  Newquay quickly flashed before my eyes as I saw my surfer repeatedly fall off the board countless times. 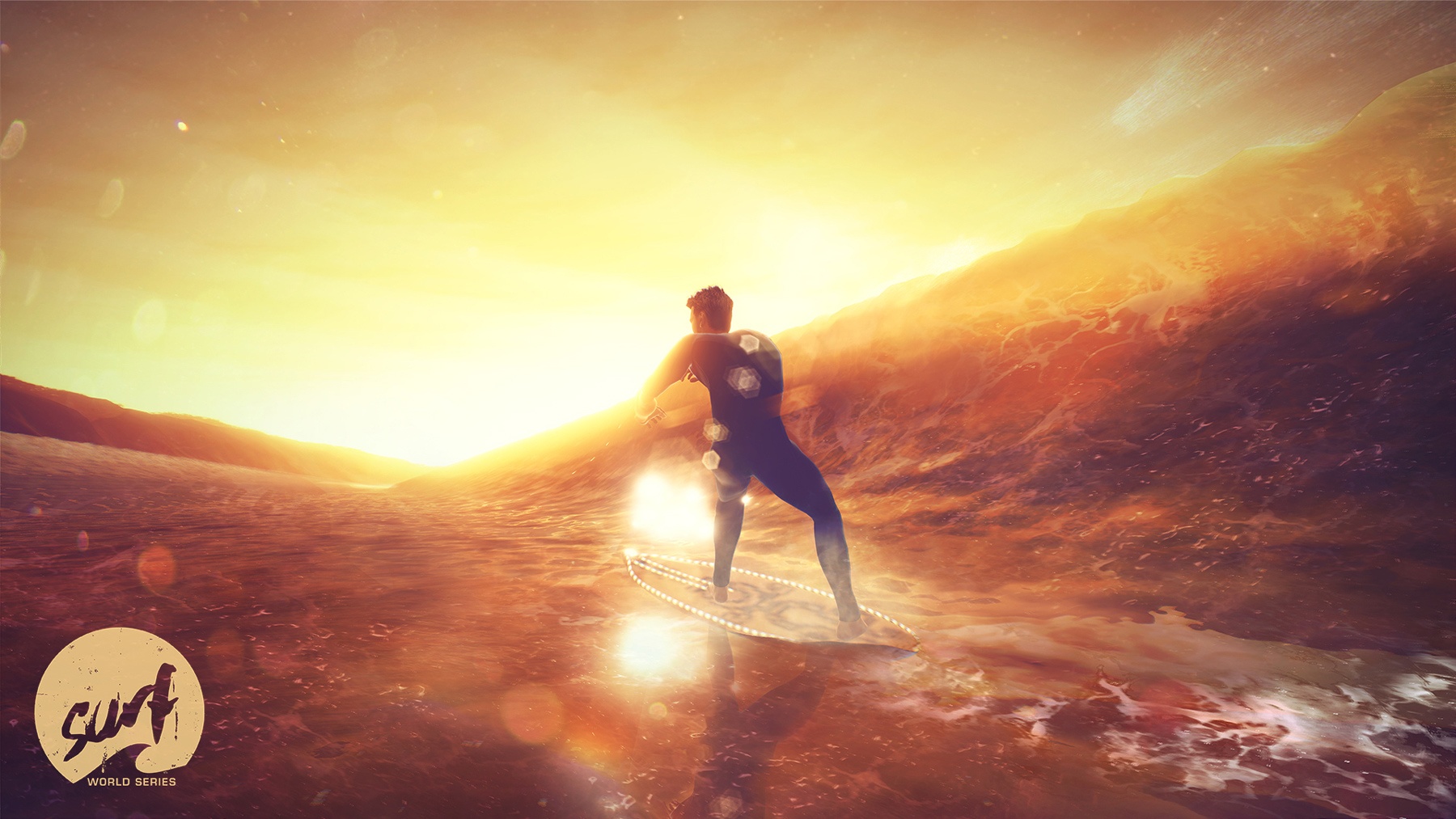 Just to let you know, this is far from what gameplay looks like.

The paddling session was quickly followed by learning to steer the board on the thumb stick along with how to perform a “floater” (yes my inner child began laughing at that one) and also “snap backs” along with the awe-inspiring “riding the tube.”  As the progress bar fills up with successful landed tricks and time spent jumping off the wave without wiping out, air tricks are unlocked that require a combination of buttons to be pressed before attempting to jump and land from the wave.  Success is rewarded with an awesome point score where wiping out resets the lesson to the start.

After some time and a little frustration the lessons are conquered and it was off to have a play in the Rookie Events.  A heat battle presented itself whereby I was required to beat the score of 5000 points within 4 minutes.  I could ride as many waves in that time as I could however only the 2 highest scoring runs would be used.

As your surfer waits with board in the water, waves of various difficulty wash into the shore allowing you to pick and choose which waves you want to attempt.  Don’t fancy that level 3 wave? simply dont press paddle and let is go past.  Seeing a level 2 wave I take up the challenge and once standing begin rapidly pressing a combination of the square, X, circle and triangle buttons.  I pull off a few combo tricks that slowly build my trick score upto the target.  Bewarned though that repeating tricks lowers the trick score so being as original as possible is key to performing well out there.  As well as the initial goal there are also 3 other challenges that you can attempt to complete during your time out on the surf that vary such as performing certain tricks and trying not to wipe out.  Each achievement helps unlock new customisation such as items of clothing or boards. 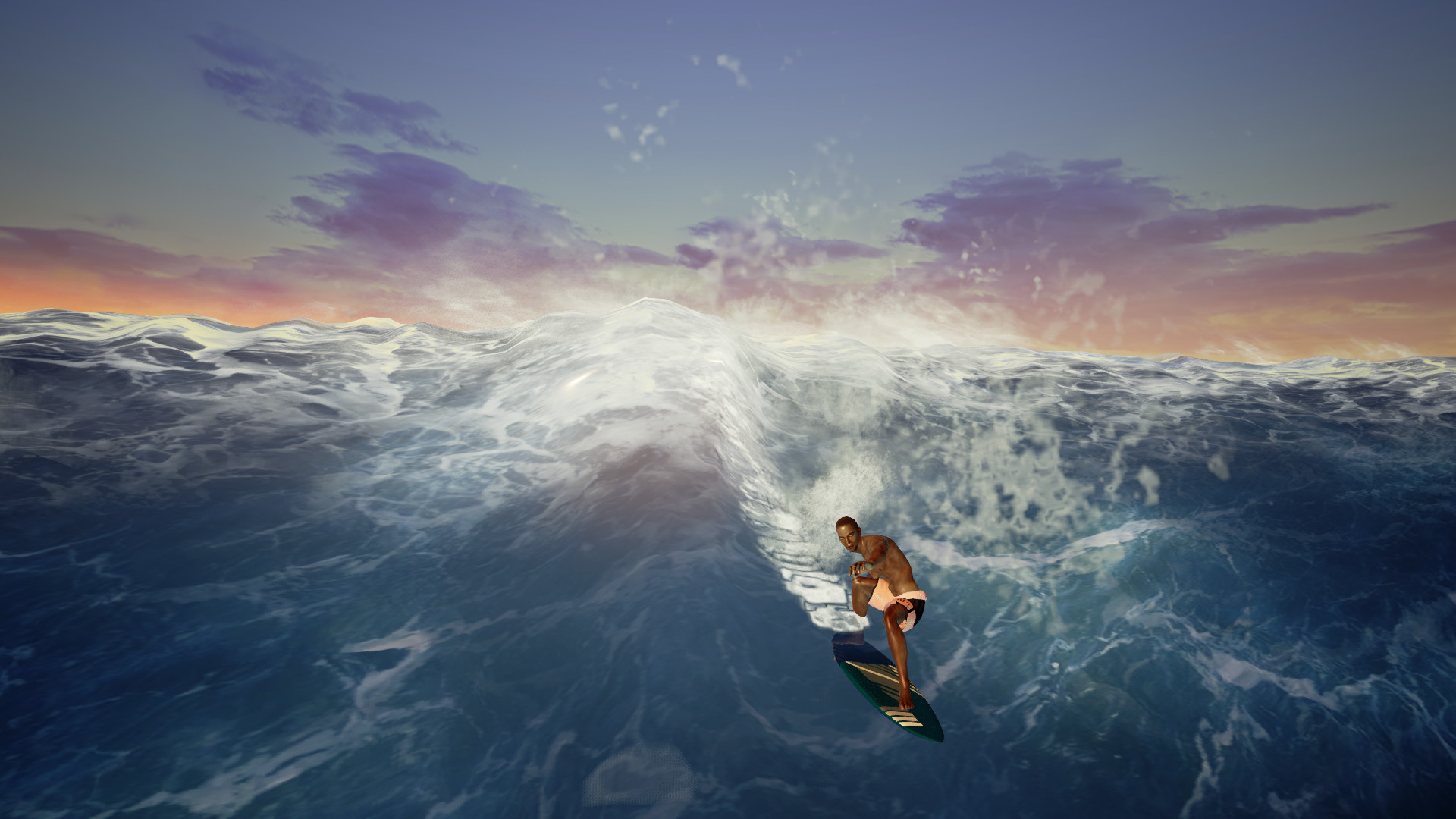 King Neptune chases the weary traveller on his board.

Requiring a score average of 5000 I scrape through with 5003, pretty much the story of my life!  As I progress through the Rookie league, the next challenge unlocks and is set in a stormy night-time sea off the coast of Hawaii requiring a score of 2500 with 2 rounds to achieve it.  Game on it is!  As I get more and more used to the controls, pulling of tricks and seeing my move in all its close-up slo-mo beauty I can’t help but feel proud of my surfer dude.  The landing appears on the wave, I fumble on the controller… and the surfer is swallowed up by King Neptune.  Ok let’s try that again!

That is pretty much it really.  Ride the wave, land the tricks and obtain the winning score.

Now I quite enjoyed surfing the rolling waves in the various beach destinations and the ability to alter the time of day and weather is a great touch however I couldn’t help but feel that I was playing a Playstation 3 game.  The detail of the surfer, scenery and waves seemed a little basic, not that this detracts from the playability as such but it doesn’t have that next-gen feel.  Water has always been an object that is hard to animate at the best of times however I feel something is not quiet right with its look. 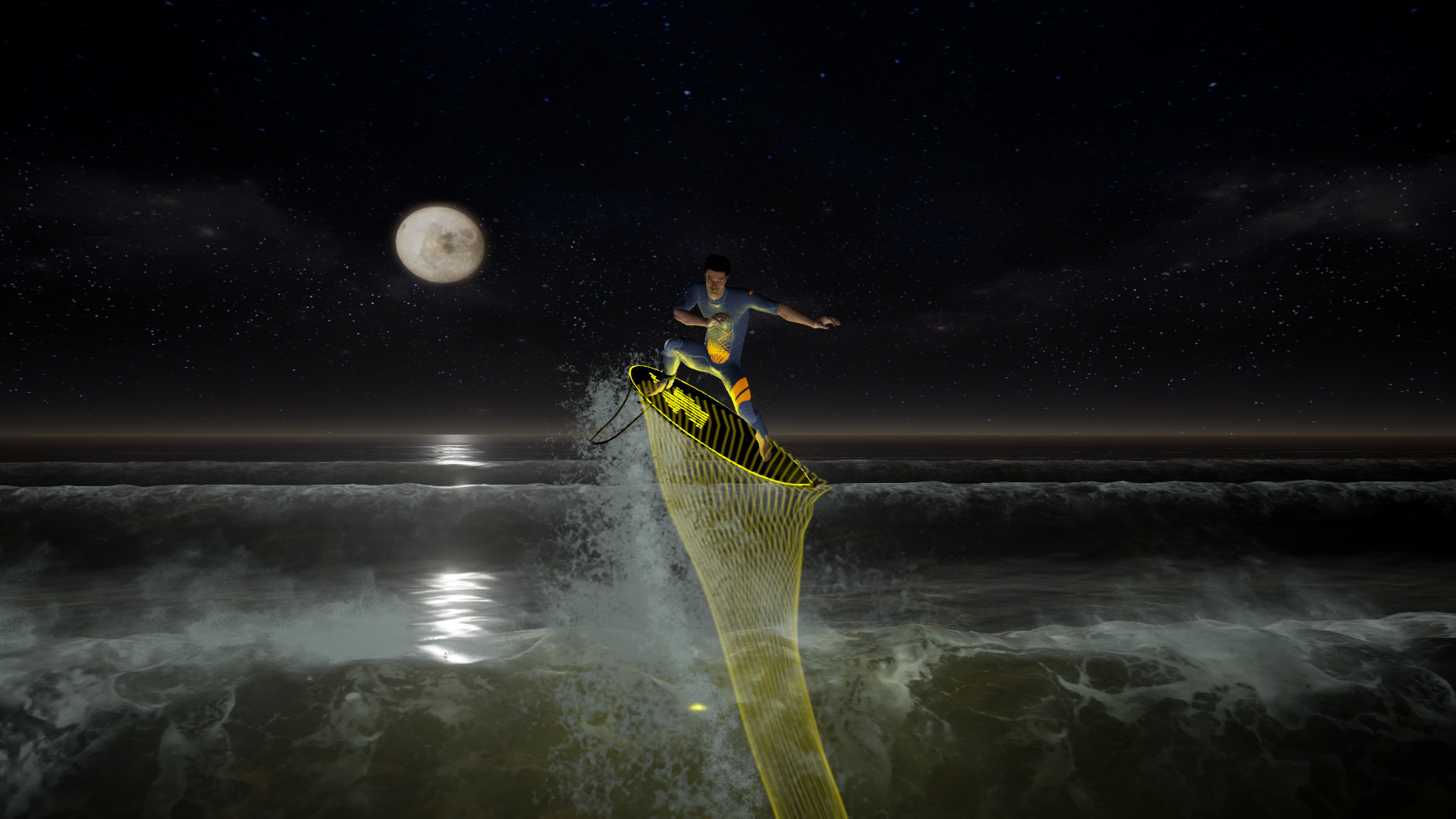 Surfing at night, who’d have thought that would take off?!

The sound effects of the waves are ok and fairly realistic and the soundtrack comprises of pleasant indie tracks but I wouldn’t say that it got me in the mood for hitting the surf.  Maybe the years of watching Transworld Sport Tv that set punk rock numbers to the surfing highlights built my expectation up a little too much.  The adrenaline rush was certainly not there.

With only 5 map locations and the variable of either day or night along with weather settings, I’m not sure if there is enough content to hook a wannabe surfer gamer for long.  Sure it has been a long time since the Playstation 2 classic Kelly Slater’s Pro Surfing however to be frank I kinda enjoyed that one to this offering.

That said, it is good to see a surfing game once more grace the console universe however I hope that it either gets refined somewhat or becomes the influence for a next-gen release that contains better graphics, water physics and game content.  For the casual gamer it is certainly worth a peruse if you a) enjoy the sport of surfing but don’t like getting wet and b) games that involve timing skill combinations to perfection as the reward can be somewhat satisfying.  For me however its all a bit lacking with regards to what I expect in sports games.

I give Surf World Series with a Thumb Culture bronze award with 5 out of 10.

Surf World Series is available now on Playstation 4 & Xbox One.

Allow me to preface this review by saying I am a big fan of ...

In our latest PSVR game review, I have dug into Unearthing Mars 2: The ...