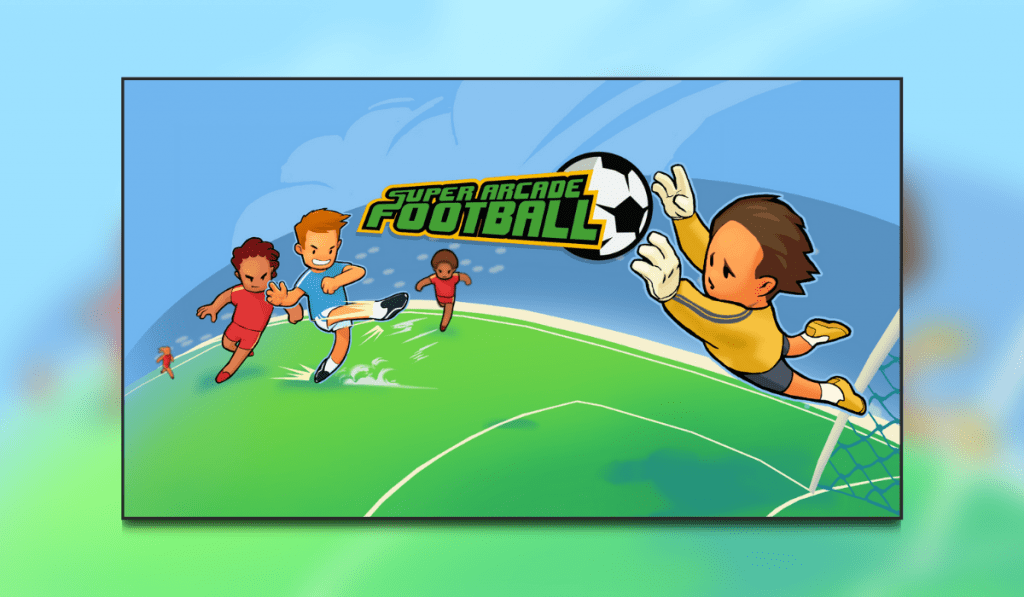 Welcome to my review of Super Arcade Football. It is self-published and developed by OutOfTheBit Limited (Super Arcade Racing, Wild Baffo). Super Arcade Football is available now on PC, Apple iOS, and the Google Play Store for Android. It is a retro-inspired football game that pays homages to the classic Sensible Soccer.

Super Arcade Football Smashes It Into The Back Of The Net!

Will Super Arcade Football win the league? Or will it be relegated to the bottom of the pile? Continue reading to find out. Check out my previous review here where I played the long-awaited King’s Bounty II.

So straight off the bat (or ball?), we are introduced to our main character in the game who is coincidentally named Martin. That is the default name of our protagonist and can not be changed. I just found it awesome that he shares the same name as me. Anyway, we meet Old Joe who is the owner of Balarm Football Club, which has gone bankrupt.

After a short chat about the club needing to stay and to prove their worth against the local rivals Snakesfield, Martin agrees to buy Balarm F.C. from Old Joe for a quid. Old Joe agrees and receives a one-pound coin from Martin, which is cracked and has a hole in it. Could this be the lucky coin Martin has been relying on and will it pay off? Only you can find that out by playing the game yourselves.

On to the actual gameplay, it’s fantastic. If you ever played Sensible Soccer (also known as Sensi) on classic platforms such as the Commodore Amiga, then you will instantly love Super Arcade Football. It is literally a love letter to the classic from Sensible Software. It looks similar, it plays the same, it even has similar sound effects. I instantly fell in love. This immediately threw me back to my younger days of playing Sensi with a Competition Pro Joystick in my hands. Clicking away on the joystick itself and the buttons tapping and clicking as I was passing and shooting. It felt so similar playing Super Arcade Football on a mechanical keyboard because of the switches.

That leads me to compatibility with controllers in this game. They work absolutely perfectly. You can also play locally against other players, I only tried with one other player but you can have more, I believe it is up to four playing locally. The good news is, remember the days of sharing a keyboard to play co-op with a friend?

You can do that on Super Arcade Football. One using WASD and space bar, the other using the arrow keys and Enter. That’s another thing I love about this game, it is literally a one-button game. Space bar to shoot, pass, tackle, cross. Everything. It’s such a simple way to play a football game and I love it. None of these fancy tricks by pressing L2, R2, Start, Up, Down, Up, Down, Cross, and Square all together at the same time. Just space bar, or enter, or A if using an Xbox controller on Windows.

The game itself is rather easy to play, I won far more matches than I lost. However, in the story mode, the game challenges you to 60 different matches, each has three starred challenges meaning you can earn up to three stars per match. Of course, if you miss a star it doesn’t matter, you can still progress as long as you won the match. Some of these challenges are below:

You get the idea. There’s a massive variety of challenges though so these will certainly keep you busy.

Not only is there the story mode, but there are also quick matches, tournaments, and online matches. Quick matches are pretty fun as you can have modifiers active, which means you can apply oil slicks to the pitch, or have meteorites raining down on players whilst they’re trying to play the beautiful game.

Tournaments contains preset game modes such as leagues and knockouts. You can also set up a custom tournament here. Check out a match I recorded below, this was during the story mode. Excuse the cheesy introduction from me haha.

So as you can see, straight away, the game is just how I remember Sensi being. Super Arcade Football is just pure fun from the get-go.

There’s not really much to say about the graphics. They’re retro-inspired which makes them rather basic. However, you will notice when it’s raining or in an icy match, there are some nice reflections on the grass below. A subtle but nice touch. The game does run really well, of course, and it looks nice on larger screens too. I didn’t experience any graphical glitches or issues at all whilst playing the game.

Now on to the audio, which has that retro feel also. The sound effects are brilliant, again it brings that Sensi vibe, the crowd shouting “OOOH!” as you just miss the goal, going wide. The loud cheers when you score, it’s all here. The music is top-notch if you ask me. Barry Leitch is the music composer for this game. Barry is known for his work on games such as Horizon Chase Turbo and Lotus Challenge Turbo 2.

This game will last you as long as you want it to. You can hop on for a couple of matches that would last you say ten minutes. You can hop on it for hours by playing online with friends or going through the story mode. The choice really is yours with Super Arcade Football. There isn’t a real extensive career mode like say the top football games like FIFA have, but that’s not what this game is about. The key is in the name, it’s an “arcade” football game.

Super Arcade Football really surprised me, it is a smashing game. From the moment you start to the moment you stop, you will have fun. I see some controversy online, particularly Steam reviews, about this game how apparently it completely changed when the game launched on September 6th from the Early Access program on Steam. It was a 3D-based football arcade game and of course as we now know it’s a 2D retro-inspired football game.

However, for me, I think this game has taken the right direction. I absolutely love it. Great work OutOfTheBit Limited. I award Super Arcade Football the coveted Thumb Culture Platinum Award.