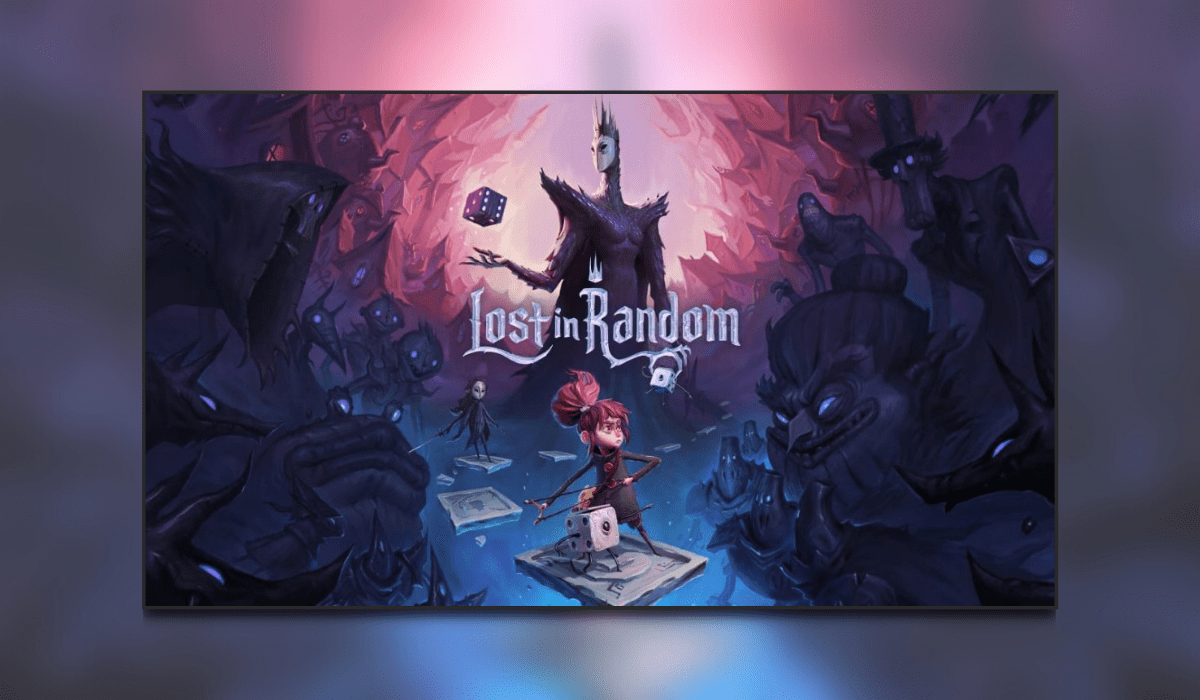 Welcome to my review of Lost in Random. This game is brought to us by developers Zoink Games (Fe, Stick it to The Man!) and is published by EA Originals (Knockout City, It Takes Two). Lost in Random is a story about two sisters named Odd and Even. They get separated due to the roll of the dice which decides the fate of Odd, who is taken away by the Queen of Random.

I was rather fortunate in being given a review copy of Lost in Random on the PlayStation 5. Can we complete our quest and save Odd as we play as Even through the different cities in the world of Random? Keep reading to find out. Check out my previous review here, where I played King’s Bounty II on the Xbox.

In the world of Random, when children hit the age of 12 they must roll the dice. The number the dice lands on decides where they will live for the rest of their lives. For example, the sisters Odd and Even both live in the Onecroft slums. This is where all the people who rolled a one live. They are effectively peasants in Random. Should the child roll a two, they will move to Two-Town. A three will see them go to Threedom. Rolling a four, that will get them a one-way ticket to Fourburg, whilst a five will see them going to Fivetropolis.

The almighty six will see them taken away to Sixtropolis, this is where the Queen lives and apparently, the children will live a life of luxury. Or will they?

Odd has just turned 12, so of course, it is her turn to roll the dice. Nanny Fortuna has come with the dice for Odd to roll. Odd rolls a six and as a result is taken away to Sixtopia to live the rest of her life. Even will not let this be. She sets herself on a quest to rescue Odd from Sixtopia and bring her back to her home in Onecroft where Even and their parents live. Not long after Even starts her quest she comes across a living dice. The queen banned these from Random long, long ago. Even can not believe her eyes in that she has come across not only a dice from the ancient times, but this dice wants to help Even.

After a short time, Even names the little guy Dicey. As you can see from the design of him, his eye is where the number one dot would be on the dice. I love the design of this little guy, he is absolutely adorable also. I am going to leave the story at this point though as I do not want to reveal too much for you. Just be sure that it is a rollercoaster of emotions during your time playing Lost in Random.

Whilst playing the game and roaming around the cities of Random, you will see little pots dotted around. Use your slingshot to smash these. These contain coins that you can spend on cards in a shop, more on that in a moment.

Once Even has met Dicey, we, the players, discover the game has a true combat system in the form of cards. The cards are found in the world of Random, earned as rewards for winning a battle, and bought from a local card salesman by the name of Mannie Dex. Mannie is literally a walking shop that has many cards for you to buy from him for use in your deck. The more you purchase from him, the more you unlock also. Each time you purchase a card, it will fill a bar. Once that bar is full, Mannie will give you the choice of one of three packs to open. You will then be able to purchase these cards in the shop. Don’t worry, you don’t have to purchase them there and then. Mannie keeps these in the shop for you.

The battle system in Lost in Random is kind of similar to that in games such as Slay the Spire and Griftlands. But, it is its own battle system, it’s only similar due to the fact it uses cards. Using the slingshot, you knock energy crystals off of enemies. Dicey will then pick up these crystals which will fill a gauge, once this gauge is full you will be able to enter the “Dicemension”. This is where your cards come out to play. Once in the Dicemension, as long as you’ve collected enough energy crystals to power up little Dicey, you will be able to use these to choose from random cards in your deck.

For example, the Bow of One, or the Sword of Three. The Bow of One is exactly how it sounds, this is a bow with arrows for you to attack your foes with once you leave the Dicemension and return to the battle. The Sword of Three is a rather powerful sword that you can attack with. You get the idea.

There are many, many cards to collect. These range from defensive cards that will put a bubble around you, which protects you from one hit. There are healing potion cards that replenish your health. There are traps, such as bombs and a dodecahedron that you can throw to damage enemies. The list of cards is pretty big. Some of the cards also stack, so you can use a Sword of Three on top of a Sword of Three if you have enough stored energy. This will then boost the power and refill the durability of the Sword of Three for you to continue slaying your foes.

The learning curve to the battle system isn’t too bad, to be honest. The game holds your hand for a good while to ensure you’re happy and know how to play. This is a good thing and it certainly doesn’t feel tedious like some tutorials/help can feel on some games. Stick with it, because this certainly is a very rewarding game.

The graphics in Lost in Random are absolutely astounding. They have a unique look to them in my opinion, it’s one of those “you have to play to know what I mean” types of game. It looks truly beautiful on the PS5. The depth of field that is applied to the graphics is pretty awesome. If you move the camera too close to your protagonist, it will blur Even out. This is pretty cool to see it happen as you move the camera around. I know that this is rather basic in a modern game, but it just looks impressive to me.

The game ran absolutely perfectly on the PlayStation 5. I experienced zero frame drops and zero bugs in the graphics department. In fact, I did not experience any bugs in this game at all. Also, another thing of the past in this game is those all too familiar “jaggies” that we would experience on the edges of assets in the games. Of course, we are seeing this more and more due to the “next generation” of consoles. However, it is great that there is such smooth graphics being used on Lost in Random.

I also love the design of the game, the assets and textures highly remind me of work from geniuses such as Tim Burton and others. The steampunk setting in Onecroft is pretty awesome. But as you travel through the world of Random you realise just how creative the team at Zoink Games really is. Plus the humour in the design of the game makes for a rather entertaining play.

The audio in this game is very, very good. The voice acting is spot on. The sound effects are fantastic. Blake Robinson is a British chap who composes the musical score, and he has done a fantastic job of it. Blake is known for his work on some fantastic titles. Such titles are The Stanley Parable, Portal Knights, and the Terraria trailers.

All I can say is wow. Those are some incredible names to have on your CV. You can tell Blake has a lot of talent, and you’ll see what I mean when you play Lost in Random.

Lost in Random will last you anything up to 20 hours for a single playthrough. That’s without even attempting any trophies. Typically it’s a one-and-done game but of course, it can be replayed. But that one playthrough is absolutely incredible. I would not blame you if you played through the game again fairly soon after finishing it.

Lost in Random was a complete surprise to me. I had not heard of it until I saw it become available for review. So I watched the trailer and simply thought “Wow, that looks class!”. Boy, this game did not let down. The team at Zoink Games has done an absolutely phenomenal job with this game. You can really tell they have put their heart and souls into this game. From the moment you pick it up to that moment you finish it, you will be laughing, enjoying the action, and taking in the top-notch story. Great work! I award Lost in Random a very much deserved Thumb Culture Platinum Award.