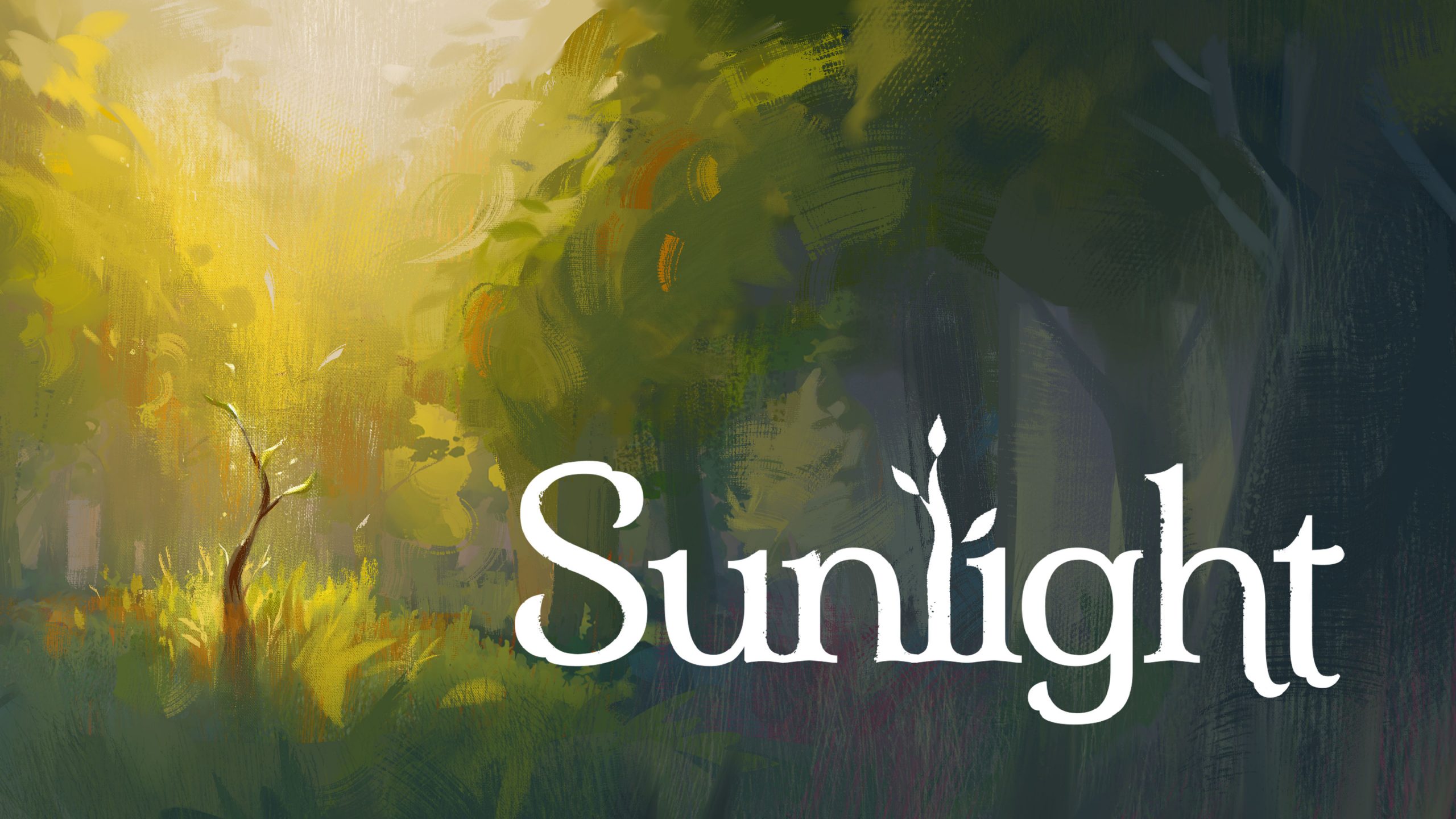 If you’re a fan of narrative-driven, atmospheric experiences then you’re going to love Krillbite Studio’s Sunlight, which was released on Steam earlier this month. Here at Thumb Culture, we’ve had the chance to review Sunlight and chat to the game’s designer and writer about the inspiration behind it.

Sunlight is a lovingly-crafted short experience from the award-winning Norwegian studio. Inspired by the work of famous Norwegian artist Edvard Munch, Sunlight takes place in an atmospheric and stunning forest. Players explore their surroundings in first person as the story unfurls around them through a voiceover from the trees. It’s visually intriguing from the start, but its when the audio kicks in and the storytelling begins that things really start to get interesting!

With lush atmospheres hand-drawn in VR, impactful music, professional voice actors and a climactic ending, this short yet stunning narrative journey revolving around humanity and nature will hook you in and engage you with it’s meditative yet thought-provoking tale. Sunlight really struck a chord with me on my playthrough. It was eerily timely given the current, isolated state of the world.

It’s a short and enjoyable playthrough that will leave you with some deep thoughts and probably a few questions. We certainly had a few, so we put them to Adrian Tingstad Husby, the designer and writer and one of the developers of the game at Krillbite Studios.

Check Out Our Interview With Sunlight’s Krillbite Studio

For any of our readers who might not be familiar with your work, can you tell us a little about yourselves and some of the games you’ve made previously?

Naturally! Krillbite was funded while we were still students back in 2011. After graduating with a thesis project we called Among the Sleep, we decided to keep working on the project for a few years and release it commercially. It’s probably still what we are most known for. Since then we have released another large title called Mosaic, and a few smaller and more experimental titles like The Plan and Sunlight.

How did you get into creating games and what kind of games are you passionate about making?

In addition to a strong focus on narrative and atmosphere in our games, I think a recurring theme is a wish to explore new territory within games. So even though we are a diverse bunch of people and we want to keep exploring lots of different genres, for example, I think there’s a common wish to make games we have not seen before.

Can you tell us a little about the inspiration for creating Sunlight?

This is a hard one! And I think the reason it’s tricky is partially because Sunlight’s inspiration comes from such a wide range of places. I love videogames, music, poetry and literature, music, meditation, philosophy, nature and environmentalism. Like, it brings me so much joy to feel as part of an ecosystem, both literally and metaphorically. I could keep going, but to actually answer your question I think what has been such a joy with Sunlight, is the chance to mash all of those things into one thing. I think that’s what Sunlight is, a combination of all those things.

What made you choose a forest as the setting for this game?

The forest setting sprung quite naturally from the themes we wanted to explore – it’s a symbiotic ecosystem of individuals.

I found the opening sequence of the game to be especially meditative – was that a driving theme in the storytelling?

The writing is definitely inspired by guided meditation, which is probably seen most clearly in the opening as you noticed. This is where we acknowledge the player directly, and ask them to relax for example. Another element is focusing on breathing throughout the game – a common technique used to fuse the mind and body during meditation.

Speaking of storytelling, was there a particular message you really wanted to convey in the game’s narrative?

This one’s particularly hard to answer without entering spoiler territory! But as I touched on I hope players linger for a moment with their surroundings. Not only in terms of environmentalism, but also their human ecosystems. 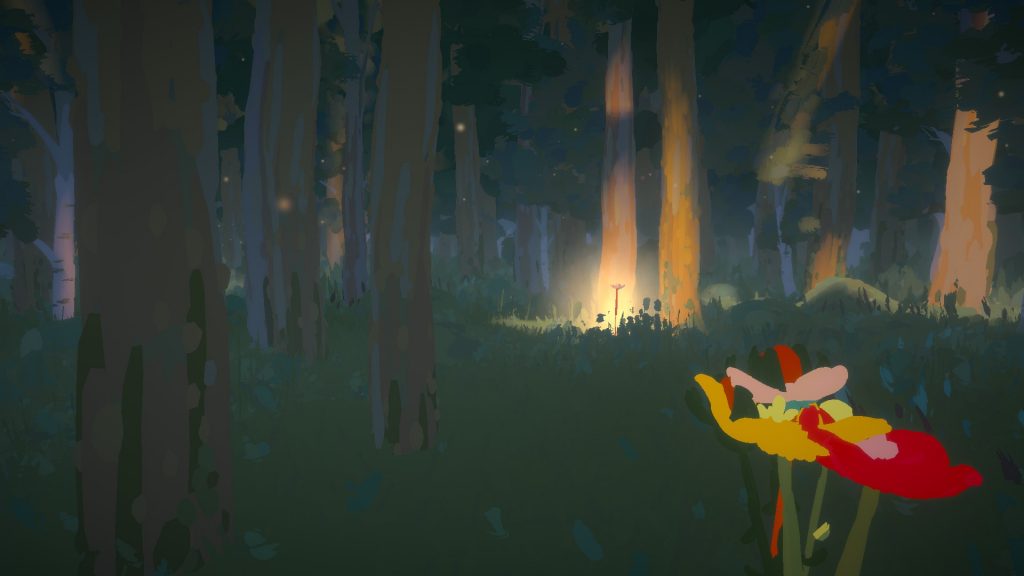 How long did it take you to create Sunlight? What did you want to achieve by making a relatively short game?

From start to end we spent about a year, on and off, working on Sunlight in parallel with a couple of other projects. The vision and scope was very focused from the outset, so we knew exactly what we wanted to do. Feature creep has been virtually non-existent – which is rare in our industry.

The audio effects in Sunlight reminded me a bit of the voices you experience while playing Hellblade! What was the idea behind having the trees using such varied voices?

We wanted the narrator to reflect humanity, so what better way than actually having voice actors from all over the world speak in unison, as one?

I love the art style used in the game – can you tell us a little about the inspiration behind the visuals?

We wanted the game to be an intimate and ‘human-made’ experience. Our small team and game size helped a lot in achieving this, but in addition, we felt that actually building the visuals with our hands would emphasise it most effectively. “Hand painting” in VR became the solution, having all the assets you see in the game literally sculpted by a human hand. 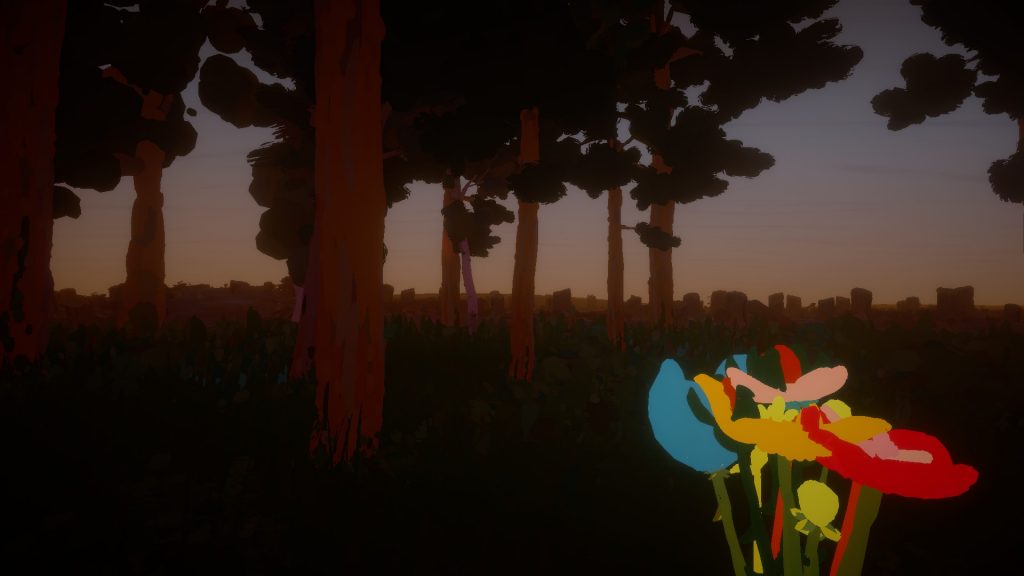 Why do you think that narrative exploration games such as Sunlight are becoming more popular?

I think it’s a natural consequence of the game medium evolving. Today we have all kinds of players looking for all kinds of experiences. Even though I personally love lots of genres, a particularly motivating part has been seeing the “walking sim” genre explored and growing the past decade, even though it was originally coined as a derogatory term.

I interpreted the tree stumps at the edge of the forest at the end of the game as being representative of tombstones, with the whole game being allegorical about life and death – out of curiosity, was I way off the mark?!

What can we look forward to in the future from Krillbite Studio?

We’re constantly looking to explore and experiment with the medium, which I think all our future projects will keep reflecting. But at the same time, we’ve also had a lot of fun diving into more established genres recently. I think we’ll approach our next projects from both sides of this spectrum.

Where To Get Sunlight

If you’re keen to give Sunlight a try then you can grab yourself a copy on Steam (PC) now. We’re really impressed with the concept behind the game and are big fans of gaming experiences that challenge the traditional notion of what a game is/should be. If you’d like to experience a different kind of interactive adventure, Sunlight is a great way to do just that.  Thanks to Sunlight’s Krillbite Studio for talking to us about the game!

We’d love to hear your thoughts on this game if you’ve had the chance to play it. Let us know in the comments below or as always you can catch up with us over on social media. 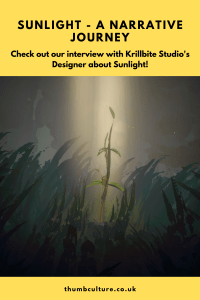