Oh a new Star Wars game from EA, what could go wrong…right? Well, this time around it’s developed by Respawn, yes those that brought you the brilliant Titanfall 2 are handling the beloved Star Wars franchise. How has Star Wars Jedi: Fallen Order turned out? Well quite frankly, brilliantly.

If you have been following the development of Star Wars Jedi: Fallen Order then you will know that its an all-new story in the Star Wars universe and introduces new characters for you to endear.

You play through the game as Cal Kestis, a young padawan who; quite quickly you find out survived the Order 66 in Attack of the Clones. On his journey on the run from the Empire, you encounter several old and new characters that you might remember from different Star Wars films. Being a young padawan on the run is not the easiest thing to do, in fact, you quite quickly become the hunted once more. As if Order 66 wasn’t enough. 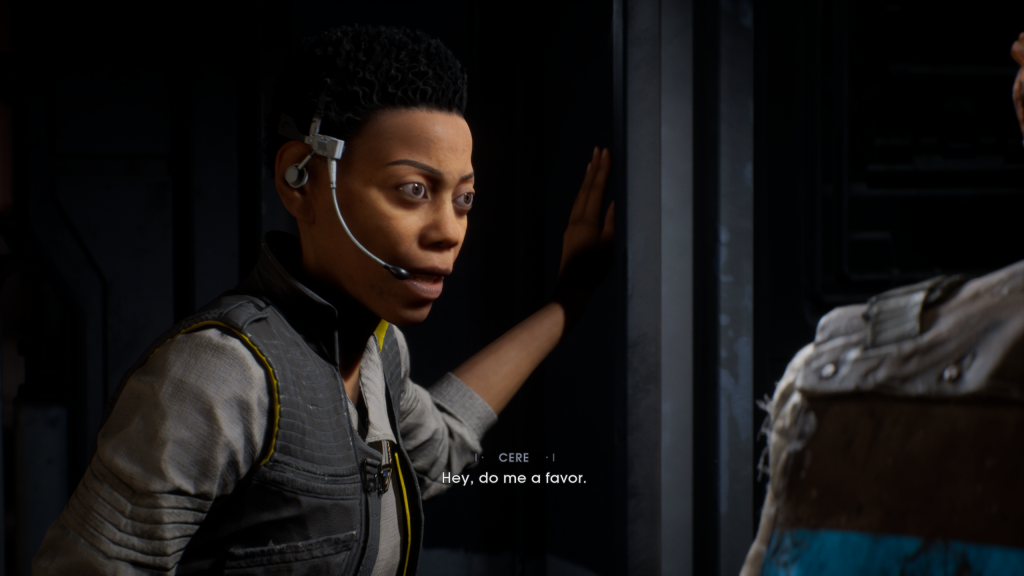 All is not lost though, as you travel across the galaxy to several different planets trying to piece together your past and complete your Jedi training, you are accompanied by a few brilliantly crafted characters. None as endearing at BD-1, your droid companion that you meet early on in the game. This little droid becomes one of your most important allies through the game, helping you reach previously unreachable areas through droid upgrades, as well as pinging out Stim packs for you to get health back. Almost like R2 did for Luke on Jabba’s Barge.

BD-1 also dives into garbage boxes and finds those cosmetic items for changing the look of Cal, BD-1, your lightsaber and even the Stinger Mantis. BD-1 rides along on your back through most of the game, and when the going gets hot he just drops off and goes into hiding, staying out of mischief.

As well as BD-1, you get to know the Stinger Mantis pilot, Greeze Dritus, who seemingly prefers the company of his ship than people, and Cere Junda, a former Jedi Knight who is on a quest to restore the Jedi Order as well as aid Cal in completing his Jedi training. 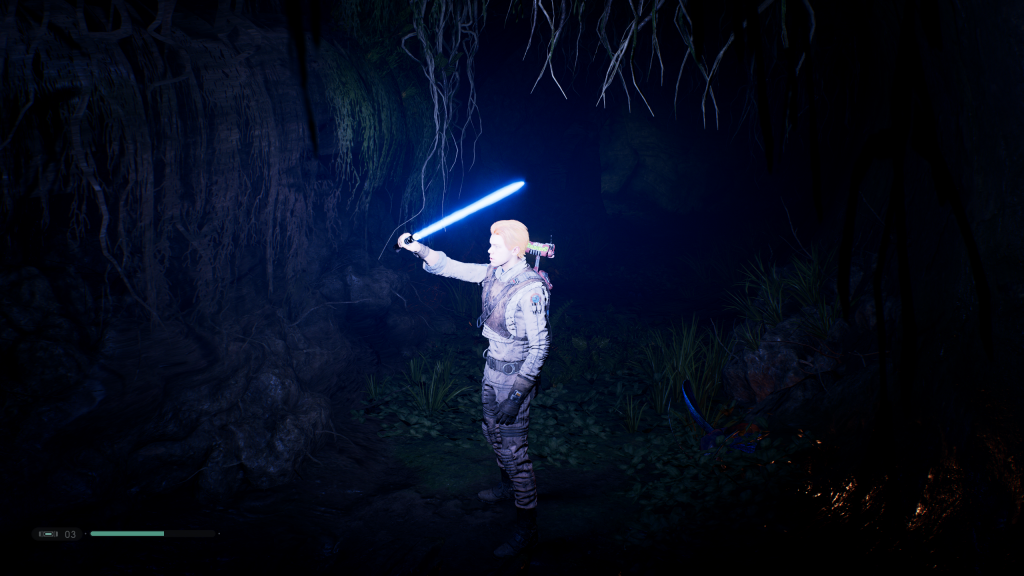 Star Wars Jedi: Fallen Order is predominantly a linear storyline, taking you from place A to B, however, what the game does brilliantly is put some inaccessible areas on each planet, which as you grow in the force and unlock more powers will require you to return to these planets if you want to get all the collectables and scrap pieces on each planet. So for the completionist out there, this is a great feature, but if you want to just go through the main story missions then you definitely have that option.

So who are you going to take on during the events in Fallen Order? The usual Storm Troopers are there, but surprisingly these ones did not go to the Storm Trooper Shooting Academy, and as such you are going to be using block a lot to deflect their blaster fire, with a well-timed tap of block deflecting them straight back at the enemy and inflicting damage. Scout Troopers come at you for more up-close battles, making you block and parry their attacks to open them up to your own devastating lightsaber blows.

Throughout the game, you come up against other enemies including bounty hunters, flame troopers as well as the Empire’s Inquisitorius, these latest enemies are super duper bad and you are going to have to think about how you are going to take them on. Making the wrong move will make you have to start all over again. 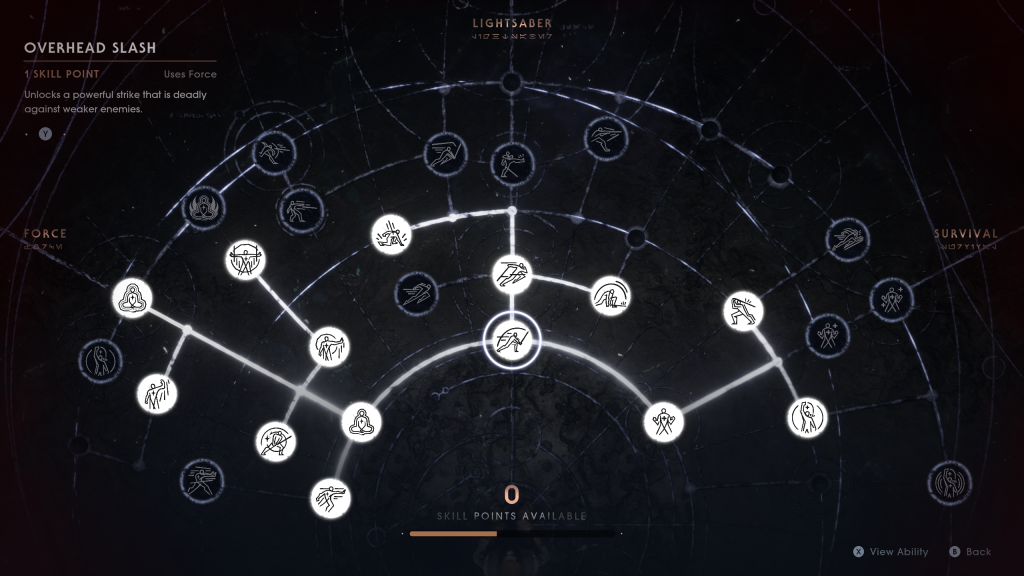 As you work your way through the Star Wars universe you will gain XP for defeating enemies as well as discovering little snippets of the past through BD-1 scanning derelict artefacts as well as Cal tuning his force in to hear fragments from the past in different areas. This XP all goes towards gaining you skill points, with each skill point this can unlock a new move for you to master, as well as improve the force powers that you gain through the game. Eventually making you become truly in command of the force and help you become a force to be reckoned with.

Wow, just wow. The graphics on Star Wars Jedi: Fallen Order are pristine, playing on the highest graphics settings just makes everything look amazing. Each planet that you go to has its own feel, whether it be beautiful greenery or the more barren planets, each one has its own charm and all of that charm is beautifully presented. 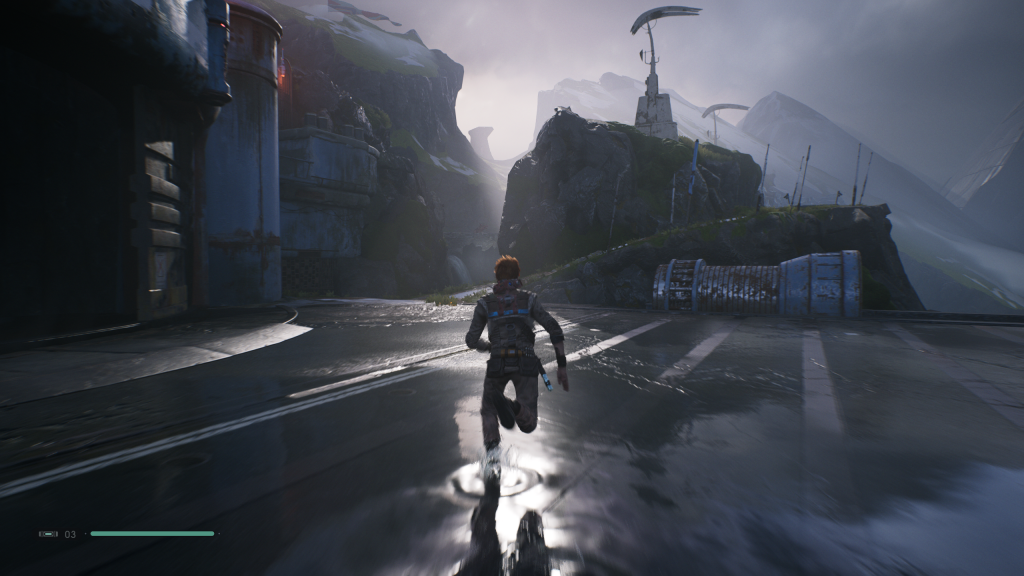 The Environments are simply stunning

The character models are brilliant, although Cal does have a fun run when you hit the sprint button.

The light effects when your lightsaber is drawn are outstanding, with the glow bouncing off surrounding environments creating some stunning screenshot possibilities.

The Star Wars soundboard has been used to great effect, from blaster fire to drawing your lightsaber.

I still get chills when the traditional Star Wars musical score graces your ears through the game.

With around 20 hours of gameplay, you are in for a treat, whether you are a Star Wars fan or not, Star Wars Jedi: Fallen Order will keep you going. You can take your time through each planet and find all the secret areas, collectables and cosmetic pieces or you can just follow the main story path. Either way, the game will keep you entertained to the max. 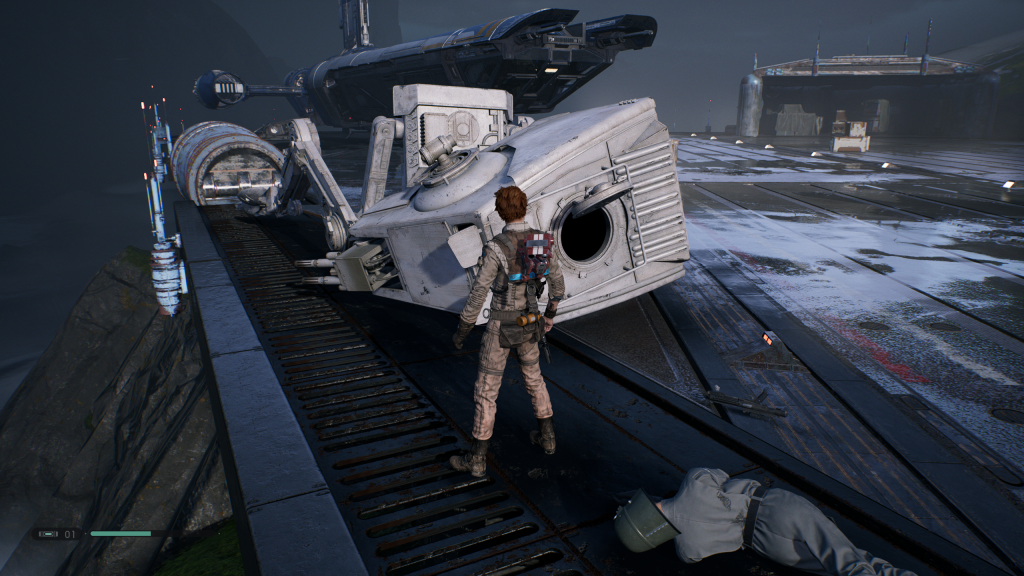 Star Wars Jedi: Fallen Order is a great game to grace the Star Wars Universe and to be honest all through the gameplay I just had a smile right across my face.

Its pure Star Wars fun and you won’t be disappointed. It’s actually great to have some good news coming to games based on Star Wars.

With great characters, especially BD-1, you feel like you are playing through an epic story, and you are constantly reminded that this is Star Wars