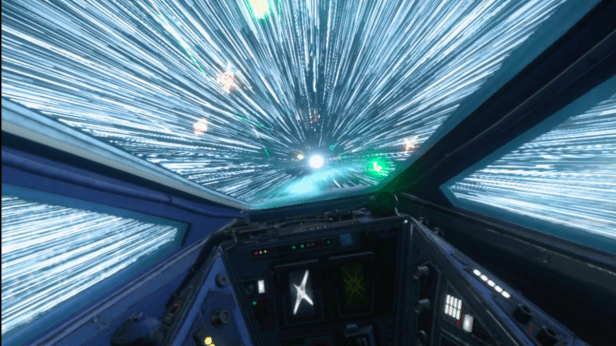 If you’re a (nearly) 40 something man then you would have grown up with the original Star Wars movies.

And since we first saw the X-Wing fighters boys around the world wanted to be able to fly one, become Luke and engage in the daring Death Star run.

Well, now you can thanks to Burnout developers Criterion Studios. You can now live out your dreams in the shape of  the ridiculously long titled Star Wars: Battlefront – Rogue One: X-Wing VR Mission. This is a free expansion to Star Wars Battlefront which allows games to climb into the cockpit of the famous X-Wing and take to the skies. There is no trench run, but the next best thing.

When I first booted this game up my jaw dropped. In front of me stomping across my path was a giant AT-AT walker. I looked up and gulped, it’s an imposing vehicle for sure. Then you can get to look around your X-Wing. I mean, MY GOD THERE IS AN X-WING RIGHT THERE and I can look around it. It’s the stuff of dreams. No doubts there.

Once you have picked your jaw off the floor, you can begin the main mission, only for your jaw to drop again. Flying in your X-Wing is magical, I’m not sure how Criterion have done it but you really genuinely feel like you’re sitting in the cockpit, it feels strange and oh so wonderful at the same time.

Then this great big medical frigate flies over the top of you and your jaw drops even further. The start is a slow based affair, just gently gliding around space following your squadron leader, soaking up the atmosphere and just gawking at how incredible it all looks. I don’t want to give too much away as it could spoil the surprises but there are asteroid belts, Star Destroyers (un-fucking-believable) and of course tie-fighters.

Now, this is not me being a massive Star Wars fanboy. The game is genuinely jaw dropping in looks and the way it controls. It could have been any space combat thing and it would have looked equally as good and been equally as impressive, but the making it Star Wars makes it all the more wonderful. The controls are sharp with pin point accuracy, the head tracking is spot on too. When I played the game I was sitting in my laid back lazy chair, almost the right sort of seat angle you would find in a X-Wing (I assume) and so as silly as it sounds I actually felt like I was flying in space. It was incredible, looking all around at the various Rebel ships, Y Wings and so on, it’s total immersion. I can safely say it’s the best example of VR I have yet played, beating even the magnificent Batman VR. 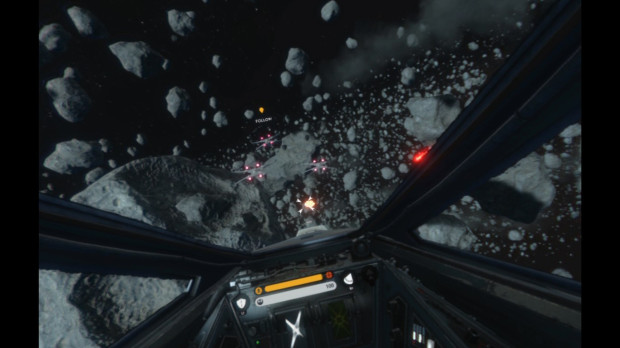 The only downside is of course the ‘VR Sickness’, which is present unfortunately. Although thankfully it’s not as bad as other games. This is in part down to good design. The X-Wing has the long nose of course which gives you that point of reference to look at to keep queasy at bay. The Slower sections of the game, where your just flying is space the nausea is practically none existent. It’s only when your mid dog-fight that you feel a bit funny.

Not really sure if I can give this an official score as it’s more of a demo than a full game, it lasts little over 20 minutes, but it is a wonderful 20 minutes. There is also some high score tables to compete against and some rewards of credits for the main Battlefront game. If I was to score it, I would have to give it a 9/10 simply because it’s an amazing demonstration of what VR can do, and finally 40 years later I’ve lived out my childhood dream, even if it is virtual. Well done Criterion.