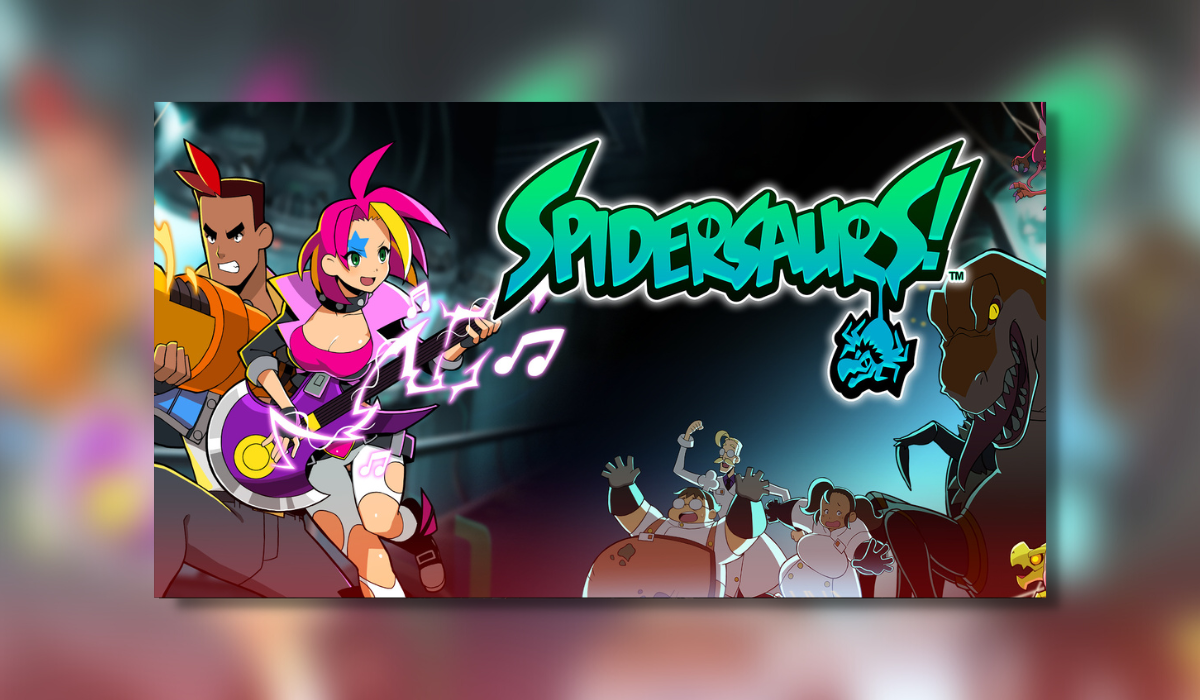 Developed and published by WayForward. Spidersaurs is a run and gun, shooter, platformer. It was released on Xbox One, Series S/X, Playstation 4, Playstation 5, PC and Nintendo Switch on the 19th of July 2022.

Spidersaurs – As Hard As Dino Doody

Originally an Apple Arcade Exclusive from back in 2019. Spidersaurs made their way onto PC and ported to every console. So it had to have been popular right? I mean a game where the enemies are spider/dinosaurs DNA mix mash. This was just too good of an offer to pass up. Throw in some run and gun and some platforming then you got a recipe for hours of fun.

If you enjoyed this review then why not check out my previous one here? You can also catch up with what the rest of the Thumb Culture team is up to on our social media.

The wacky story of Spidersaurs tells us of a company called InGest Corp. Their plans to end world hunger go horribly wrong and the creations they made to provide the meat that humanity needs get loose and go on a rampage. So it’s down to the two protagonists. A punk star rocker and an officer in training.

There is just one part about this crazy game that you can take seriously and that’s what makes it so good. The gameplay is a mixture of some of the greatest run and gun – platforming games ever made. You have the run and gun element that’s snatched straight from Contra. The platforming like Super Mario Bros and the wall jumping traversing from games like Batman and Castlevania.

Everything runs at a fast and fluid pace which is a speedrunner’s wet dream. No wonder there is a speedrunning mode because the developers definitely had that in mind when making it. The combat is great, running from one end of the stage to the other and blasting away everything in sight just feels so satisfying.

The art style is fantastic and gives you the feel of watching an 80s or early 90s cartoon. The Spidersaurs are something that shouldn’t make sense but they do. You get the usual enemies of small spiders and small dinosaurs but later on in the levels. You will get a hybrid of both species. Then there are the bosses at the end of each stage.

These giant monstrosities are a sight to behold. Sometimes filling the entire screen, but the bosses don’t really cause any problems. It only takes a couple of cycles to memorize their attack patterns. Once you do that then they are pretty much a walkover. But having simple bosses doesn’t make Spidersaurs an easy game. Absolutely not because the stages themselves are brutal as hell. You will die a lot, and I mean a lot because of the constant barrage of enemy spam.

Even on the easiest difficulty, this game is no joke. It will test your patience and gaming expertise to get to the later levels. Luckily at the end of each stage, you collect upgrades that make it more bearable. Throughout the stages as well you can collect gun upgrades. Some are excellent and some are useless (reminds me of Ghosts and Goblins in that sense)

So while the game only has six levels. They are relatively long and as mentioned you will be dying a lot so you’ll get your money’s worth on each stage. Especially if you play with a friend as there is the option for co-op as well. Just to lighten the blow a little.

The graphics are fantastic. They have that old-school cartoon art style about them as they just jump out of the screen at you with their colours and a bright neon aura about them. The voice acting is great as well because the writing is really funny in some parts and the actors pull it off really well.

Enough praise can’t be said for the soundtrack. Once again it has a 16-bit sound to it (especially the 16-bit Sega era) but the soundtrack itself is killer with an awesome theme tune that will stick in your head for some time.

For a video game that only has six levels, you would think that there isn’t really much content and that it’ll be done within the hour. That certainly isn’t the case because in the later levels you will probably spend an hour on a single stage just trying to complete it. A genuine first playthrough will probably net you around 10 to 15 hours but that just depends on how good you are at these types of games.

My final thought on Spidersaurs is that it’s a great game. It pulls you in right from the start with the catchy intro, colourful art style and kickass theme tune. The gameplay is fast-moving and flows really well. It’s a game that will definitely appeal to many video game genres as well as retro gamers.

In saying all this I just can’t forgive the difficulty. Maybe it’s just me or that will be easy for some of the hardcore players. It just made me lose patience with it quite quickly but apart from that, the game is definitely worthy of the Thumb Culture Gold Award.