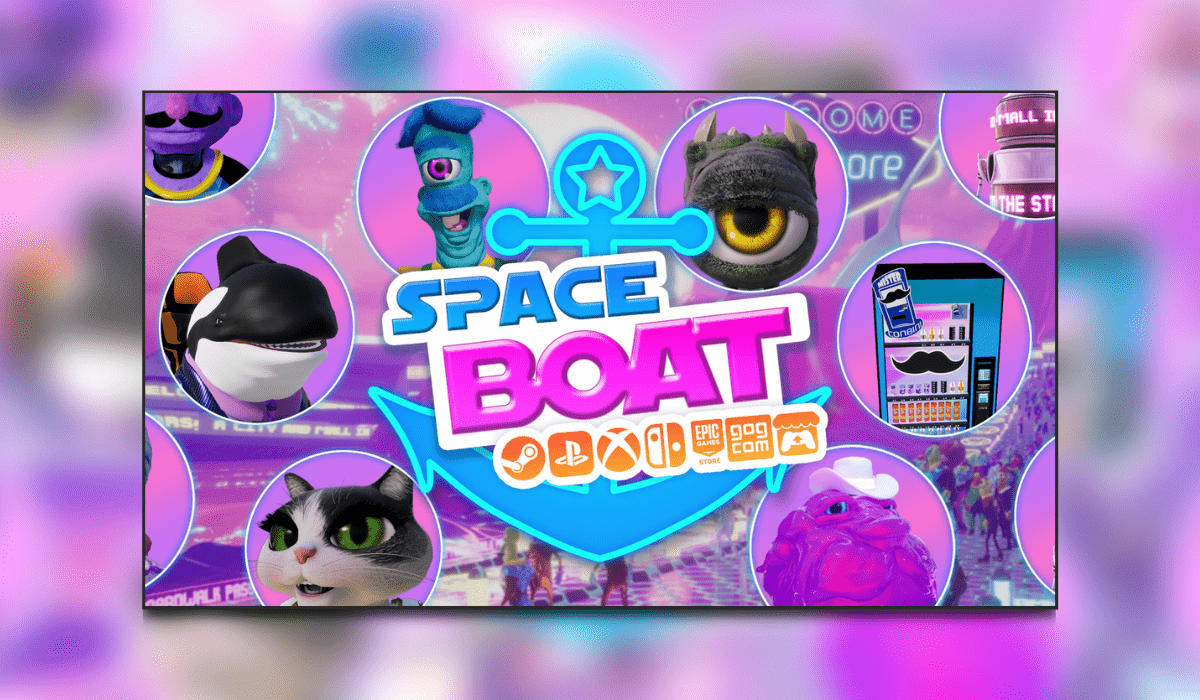 Currently in development by Recombobulator Games, “Space Boat is a new narrative adventure game with interactive elements.” Funded through Kickstarter, at the time of this preview Space Boat has raised £3,426, which is a little way from its target goal of £23,554. With a 15 minute playable demo now available, will they reach their crowdfund goal and give us a finished game? Join me below as I attempt to figure that out.

“You’ve been waiting to travel for a long time? It’s now possible to go to the most beautiful places in the galaxy!… or whatever you can afford.”

With a development team who boasts an impressive resume of Mass Effect, Dead Space, and Thief, we walk into this demo with high expectations. Playing as cat detective ‘Inspector Domino’, a member of the RCNP (the Royal Cosmic Narwal Police), we arrive on Jelly Shore. Our mission is to catch an intergalactic shape-shifting jewel thief, who plans to board Princess Andromeda – an intergalactic cruise liner docked at Jelly Shore. To complete our mission we must figure out a way to board the Princess Andromeda.

Reminiscent of KOTOR, the gameplay is heavy on dialogue and character interaction, with a dark sense of humour running throughout. With the player needing to move back and forth to progress storylines, an in-game notebook is a useful tool. At times you may need to eavesdrop on conversations in order to discover key pieces of information.

I was also surprised to see this game offers more than just back and forth character interaction and dialogue. Space Boat also features some pretty well-thought-out puzzles and obstacles, such as laser wires inside the planet’s ventilation system.

In its current form (being an early demo) Space Boat is a little raw, with the occasional bug here and there. Some of the interactions show controller buttons instead of keyboard keys, such as ‘Press A’ rather than ‘Press E’. Again though, this is an early demo and these are only minor bugs.

I have to admit that Space Boat has pleasantly surprised me when it comes to the visual side of the game. Many modern games utilise free assets to reduce development cost and maximise productivity. While this isn’t necessarily a bad thing, it’s great to see developers showing some creativity, which is exactly what we’re seeing here. Characters like Allen – our Space Boat travel agent quoted above, have been skillfully sculpted in zBrush.

After browsing through Recombobulator Games’ development blog, it looks as though they made the decision to move to Unreal Engine 5. This engine shift has allowed Space Boat to utilise the UE5 lumen reflections and global illuminations to the fullest effect, complimenting the spacey neon look of the game.

Complimenting the visuals, we have the audio. From an original soundtrack playing on the main menu (be sure to listen fully, it’s worth it) to thought-out background conversations and character voiceovers, the sound in Space Boat is truly unique. I did notice a few issues though, such as missing voiceovers and repetitive alien speech. However, I would highlight once again that this is a super early build.

Usually, I’d talk about whether or not a game is repayable, how many hours I think the game would take to complete and whether or not it’s worth the price tag. However, being an early demo all I can really say here is that Space Boat looks promising, really promising. Storylines are well-thought-out, character interaction feels meaningful and actions have consequences, influencing how future storylines play out.

The meme culture and almost dark sense of humour that runs throughout the game really got me, and I found myself laughing out loud multiple times. I won’t say too much on this, as I’d hate to ruin the fun or spoil the jokes.

This 15-minute demo took me 44 minutes to complete, as I spent some time really exploring the environment.

I sincerely hope Space Boat meets its funding goal, and we get to see the game in its full potential. Please do check out the Kickstarter and see if you can have a play through the demo yourself.