Trailblazers, developed by UK based Supergonk and published digitally by Rising Star Games is a Wipeout style racing game set in the future with a unique and colourful game mechanic whereby you can paint the track your team colour in order to boost.

Available on PC and PS4 today (8th) and Xbox tomorrow (9th) with Nintendo Switch around June, the concept of Trailblazers sounds fun but the proof is always in the gameplay! 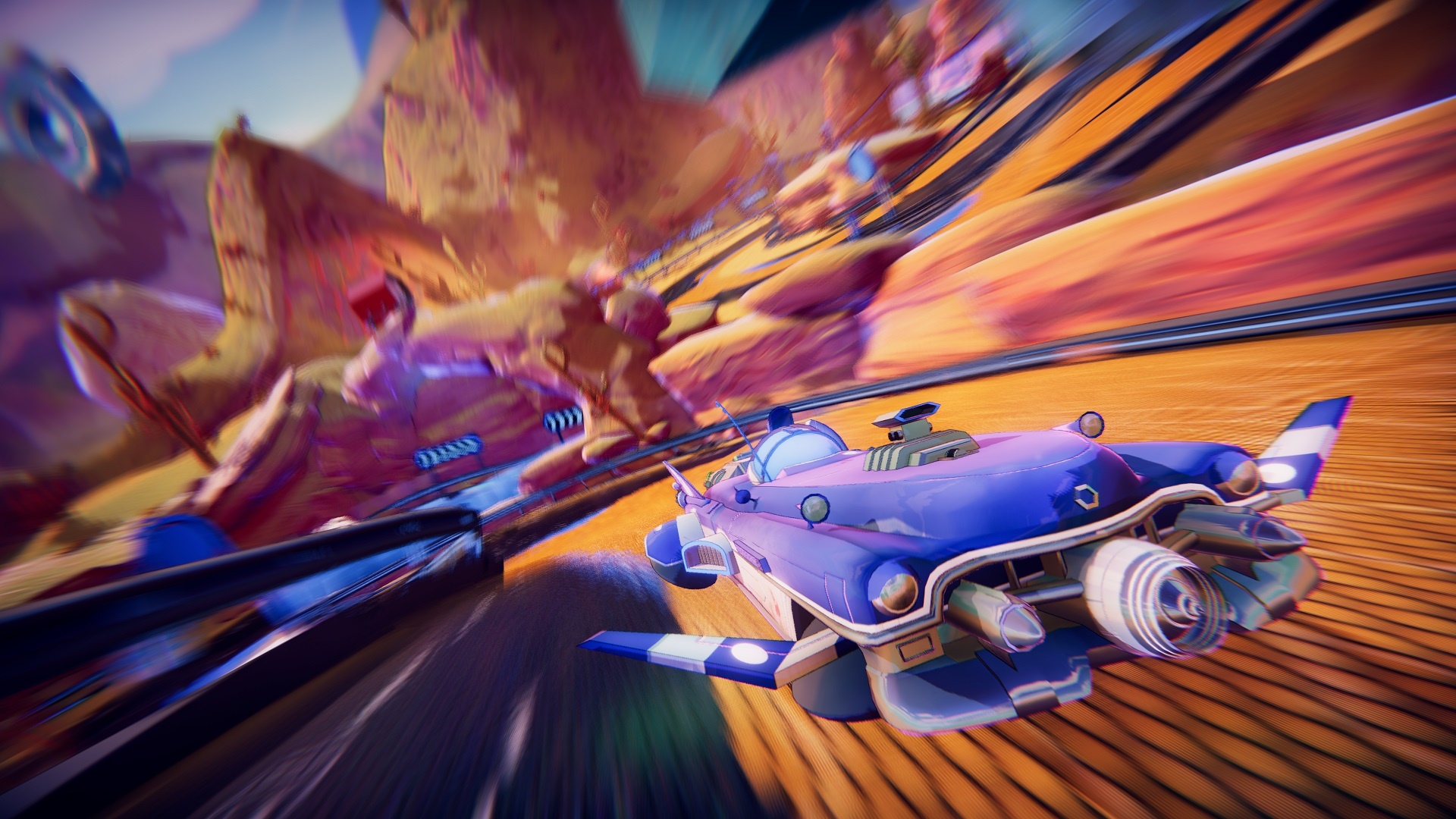 “The red car and the blue car had a race…”

As the cartoon style intro begins and the dance track kicks in you are greeted by a simple selection of game options namely; Single player campaign, Custom race, Online race and Options.  An exclamation mark points to the first game option and it is off to the campaign for the first few chapters to learn what Trailblazers is about.

The campaign mode is set across 20 chapters that serve to not only teach you the basics of the game but also allows you to try all of the characters throughout the story.  Each chapter sets out specific mission goals such as finishing within certain times, scoring the most points or taking the chequered flag infront of another character.  Each fulfilled mission gives you a token which contributes to your overall completion of the game. 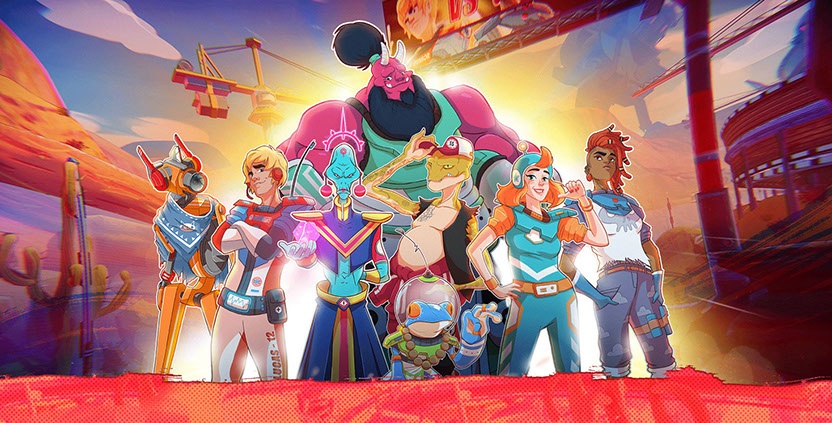 The motley crew of Trailblazers.

During a race, holding “X” in my case, as I was playing the Playstation version, allows you to leave a paint trail behind your hovership, the quantity of which is shown by a handy paint bar at the top of the screen.  This in-turn allows your team mates, which can be upto 3 in a team, to rapidly boost when they are travelling across your freshly laid paint.  With a few similarities to Splatoon, the other teams can recolour across your team’s paint therefore it is a battle to keep control of the best boosting spots on the track.  With each completed lap the track becomes more and more vibrant with a mismatch of team paint all over the place.

As well as having the ability to drop paint behind you there is also a paint attack that you can utilise to your advantage when your paint bar is full.  By pressing “Triangle” at the correct time, you project your entire liquid contents ahead of you allowing your vehicle to immediately boost and also spin opponents around if they get caught in the money shot. 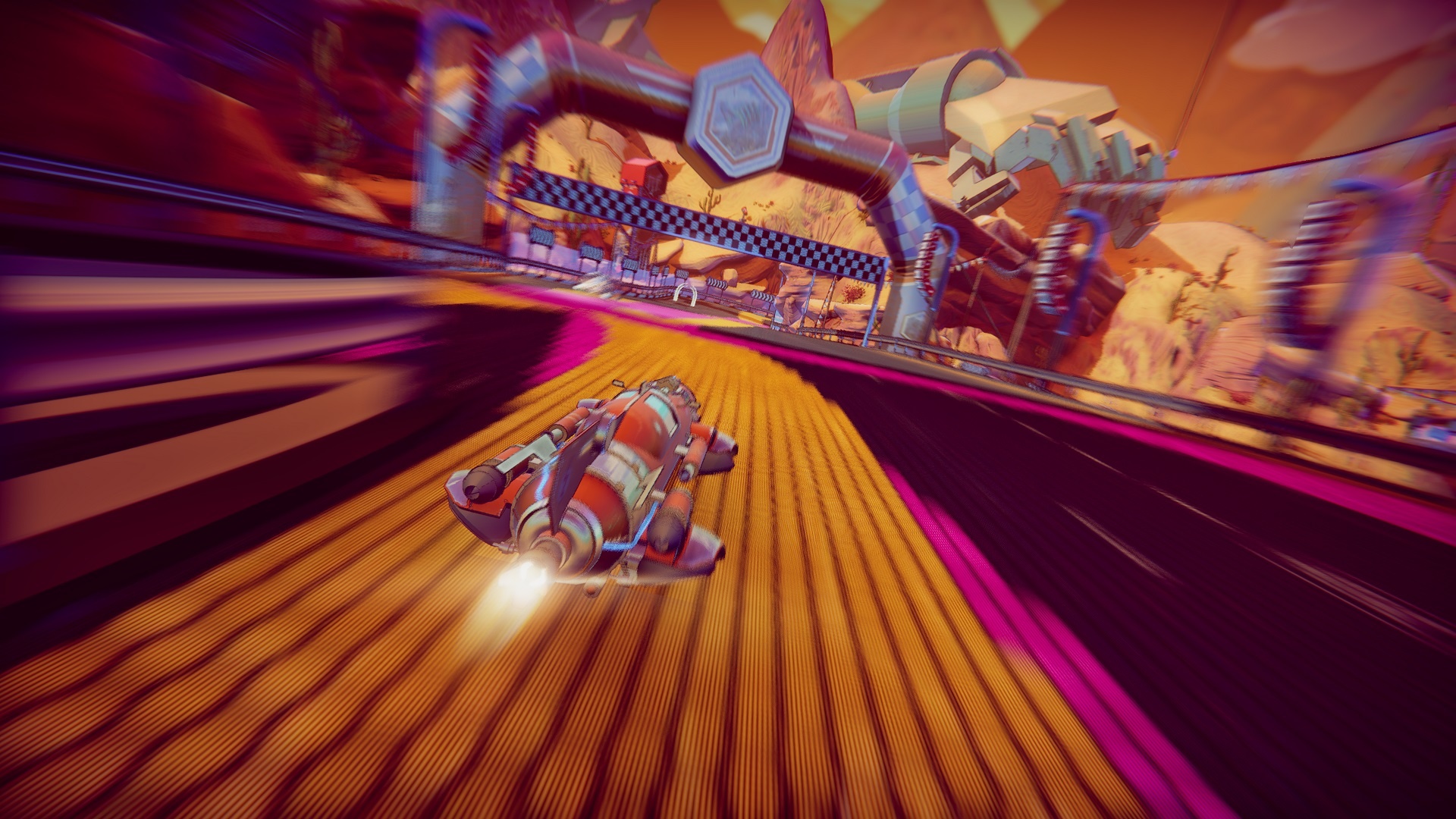 The longer you can stay racing across the top of your team’s paint, the more boost you acquire which can range from 1X, 2X, 3X and Max.  The amount of time you can spend hurtling down the track at these ludicrous speeds also earns you further points.  Look out for the gates that appear on the track as they provide an instant track of paint ahead of you although they tend to be the longest way through corners.

In addition to earning points through boosting, there is a drift ability to allow you to slide around the corners.  To be honest, I felt that this is where Trailblazers is let down.  Although the different characters bring with them various stats such as how long they can paint trails for, how fast they can boost and how easily the vehicle can be handled, the drifting element is just shockingly bad.  One tap of the “L2” button seemingly gets transferred to the hovership as “stop the front of the vehicle on the spot and put a bag of bricks in the boot”.  This results in every highspeed corner being a case of either slowing down way too much or playing pinball off the crash barriers.  It is a shame as I was expecting some kind of fluid drifting similar to Sonic Racing atleast so I could attempt to have the satisfaction of pulling off a drift while trying to navigate smoothly across my team’s paint at high speed. 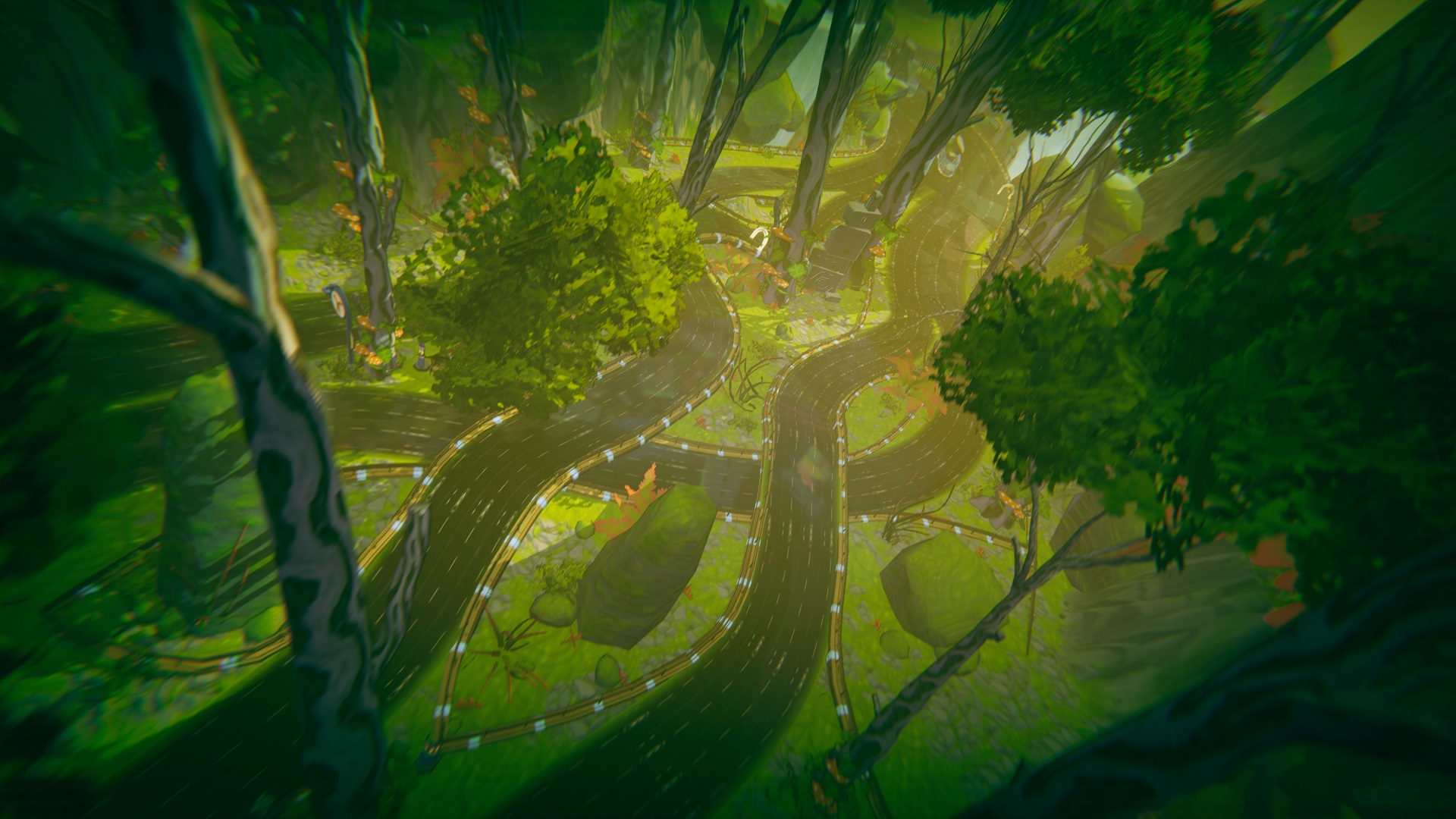 One of the many race tracks, no Ewoks in sight!

Putting the campaign aside, the “Custom Race” option allows you to setup a 1-4 player offline race which has the bonus of being split-screen.  “Online Race” allows you to take the racing global, even cross-platform, with your split-screen buddies as well if you so desire.  There are a fair few tracks to choose from, each with their own sexy scenery such as woodlands and intergalactic highways.  To keep them fresh there is the option to run the track in reverse and even mirrored therefore getting four different races from one track.

Game modes for both offline and online racing options are;

Partner Battle – this is a where three teams of two players race for high scores where strategy is everything!

All vs All – do I really need to explain this one?

Time Trials – where one team of three players attempt to set the fastest lap times and biggest boosting/drifting combos.

Gate Chase – here you do not have the ability to paint the track manually therefore you must fight to be the first to race through gates on the track in order to paint specific strips.

There’s definitely something for everyone when it comes to racing options.

Featuring artwork from Bafta award winning artist Will Milton (Nickelodeon Anti Bullying Campaign 2009), Trailblazers looks gorgeous when it comes down to the animations and scenery.  The characters are well drawn with an almost early futuristic comic book look about their style while the hoverships certainly appealed to my children who loved the unique aspects that they all have.

The soundtrack is pretty banging featuring a retro-futuristic concoction of tracks by artists I have never heard of such as Skope, Derevolutions and A.Skillz however the main thing is that the music fits the game.  When it comes to sound effects, they are ok, however the static cutscenes where the dialogue appears has the characters just perform either a short laugh or an “aha!” instead of talking.  I know this is a technique often adopted by a lot of games however as the dialogues are so short it wouldn’t of hurt to bring the characters a little bit more to life. 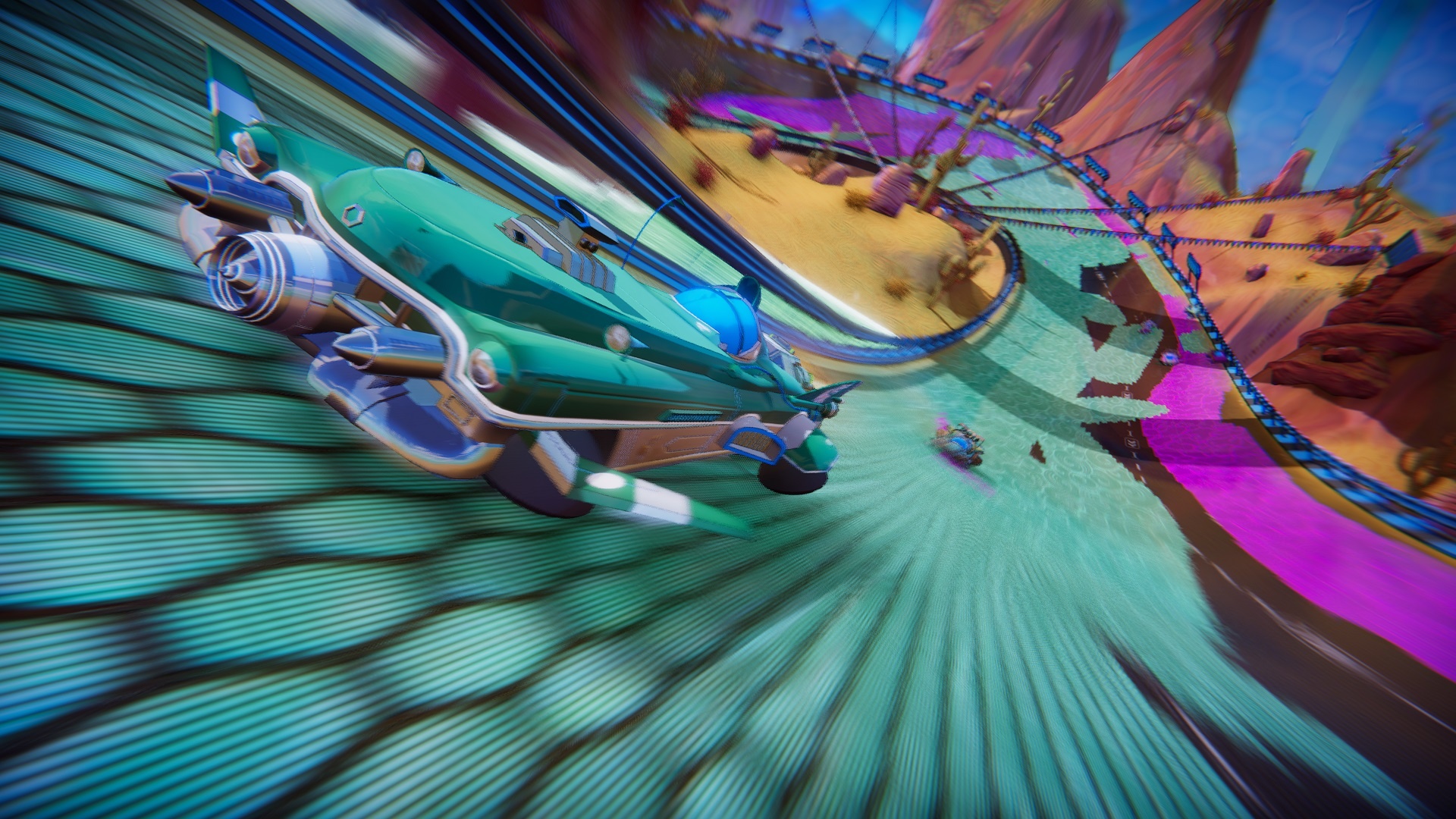 The solo campaign on Trailblazers is 20 chapters long and if you are a die hard collector of every goal that is set before you then yes there is definitely some replayability here to achieve the missing tokens should you not reach a goal in each race.  The local co-op and online play will allow you some bragging rights, especially with the inclusion of cross-play platforms.  The technique of painting the track in the correct places in order to boost your fellow team mates is certainly a skill to learn and acquire whereby the drifting is a mystery all of its own.  If the drifting becomes a more fluid affair then I feel the gameplay would be a lot more captivating.

Disclaimer: A code was received in order to write this review.  Many crash barriers were struck along the way.

Have you ever wondered what it would be like to help piece someone's memory ...