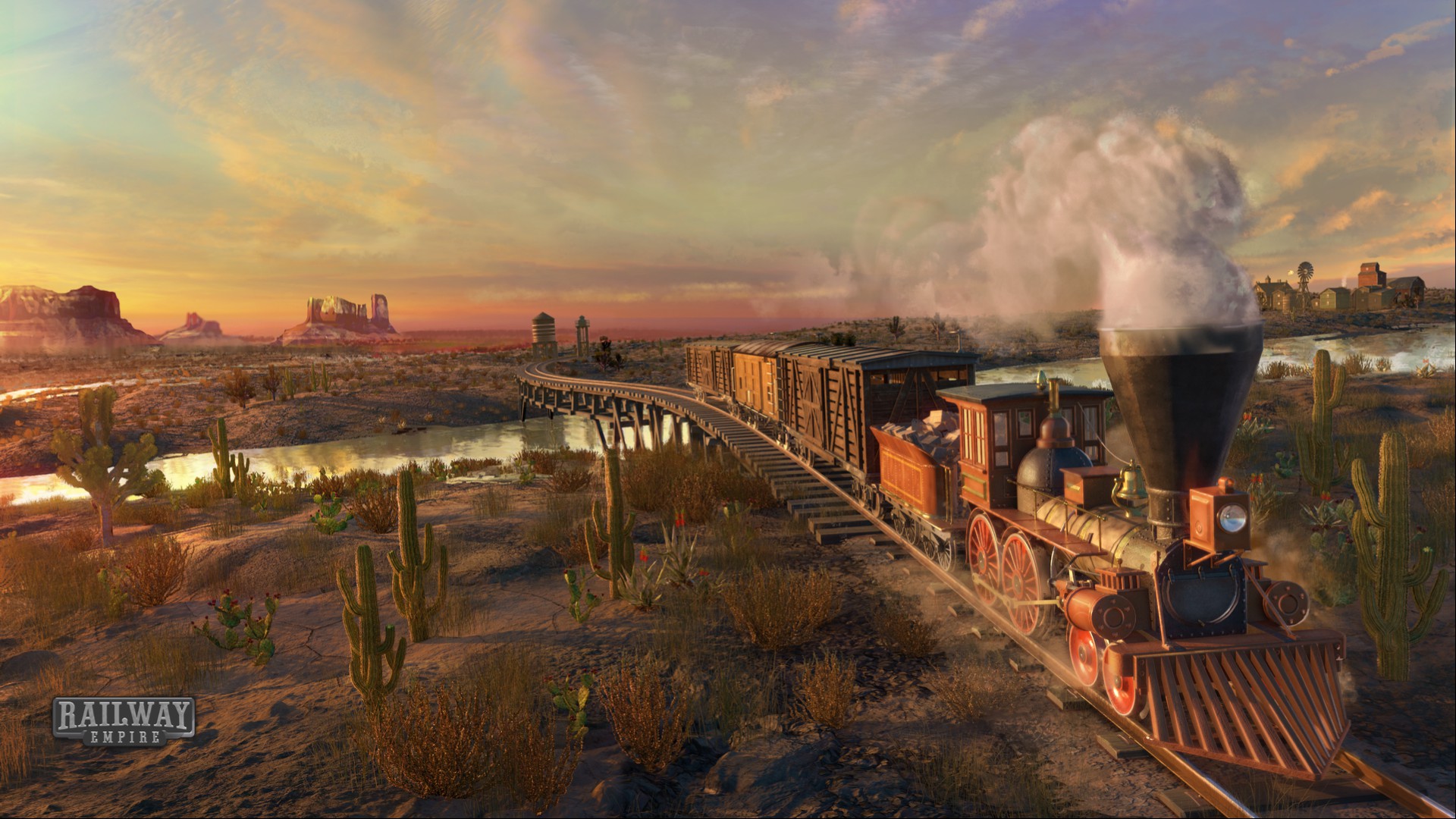 Gaming Minds Studios have brought us a trip into the history of the train and how it transformed North America. The question is, did it make the nation bloom or did it sink into a great depression? I once again tackle a great railroad, but this time from the safety of the owner’s office. Railway Empire, here I come.

Railway Empire is a classic point and click construction game, not a lot can go wrong really. There are a few modes, Campaign, Scenario, Free mode and Sandbox. Start with the campaign as this will guide you through the basics of the game. It’s the 1800s and you need to build a successful railroad company. Build stations, build trains, build track. That’s the game in a nutshell. Obviously there is more to it than that, I’m just making it sound easy. You need to supply goods to your towns to make them grow, check what they want and get it to them. There is research to be done, maintenance of your trains, and staff to hire. There is also some stiff competition as well, so be on the look out. You can buy shares in your opponent’s companies, take out bonds when in need of quick cash and even merge with the competition.

The way the game works is very easy to understand, lay tracks by clicking on a start point, then clicking on and end point, and if need be move the middle as well. Place signals and put in sidings (trains are not to scale), build supply towers to keep your engines lubed and maybe a warehouse to store goods in transit. The game isn’t so simple that you can walk it on the first go. You will make tactical mistakes, planning mistakes and kick yourself more than once. There are 2 different difficulty settings, so once you master easy you will need to start again in realistic mode.

Railway Empire is a very good little game. whilst it lacks the complication of realistic markets and share prices and all that jazz, it delivers a more than capable game that is easy to understand, but not overly easy to win. I have always been a fan of railway based tycoon style games and this one fulfils the brief well. I knew it was good when it had got to 01:00 and I was still on the laptop. The styling is not uber realistic which compliments the simplicity of the gameplay. The other competitors can be a little annoying with their little catchphrases sometimes, but I have kids, so I can filter that out easily. It’s a skill. The campaign is good, guides you through gently. The scenarios are also very good, and not that easy in some cases. Free play is fun as well, unrestricted map domination is always a good thing. 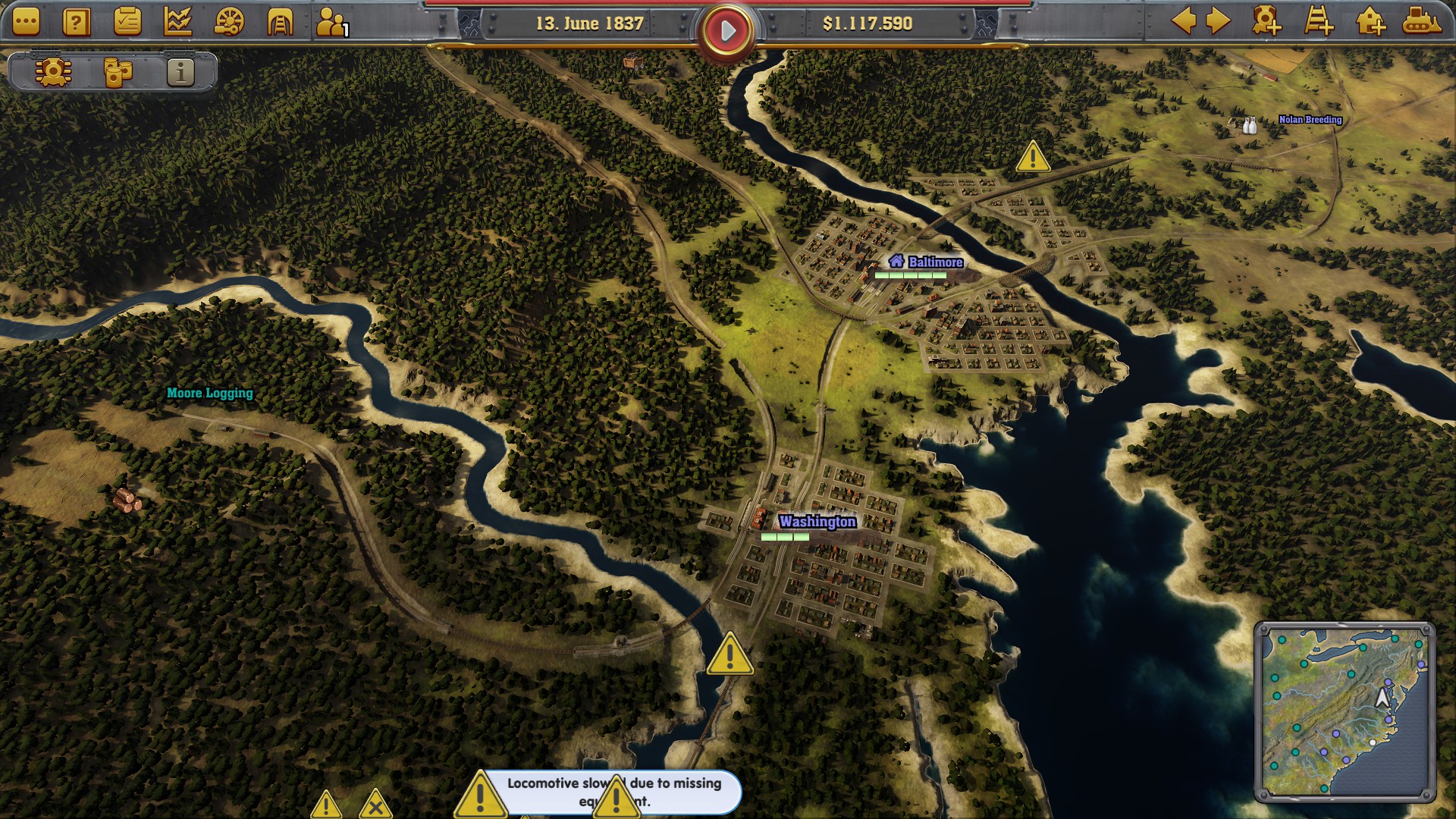 Being an early release there are still a few niggles with the game. For example when I did chapter 2 of the campaign, the game wouldn’t register any rural stations connected to my network. This was an issue as I needed to connect them to finish the chapter. Sometimes rural station just produce nothing to pick up despite stating the level of production. These are issues that Railway Empire needs to resolve.

Rather similarly to the graphics, Railway Empire designers seem to have got round the table and decided that audio would be good. They don’t blow the budget on this though. Toot toot! There are railway noises, people chatting, alert tickings, basically everything you need for the game. If you are playing the game and thinking that the sound isn’t very good, then your heart ands soul are not into it.

Railway Empire is a very good addition to the genre. It doesn’t take long to learn and is a really good introductory step to a lot more complicated games. I really like this game, it has charm and simplicity. I think that this game will be played a lot in my house (mainly by me) and I would imagine the same for other lovers of the genre. Ever since Railroad Tycoon was launched in 1990 this genre has had a following, and I think that Railway Empire will be a worthy member of the family. Railway Empire has stoked its way to a Thumb Culture Silver Award.