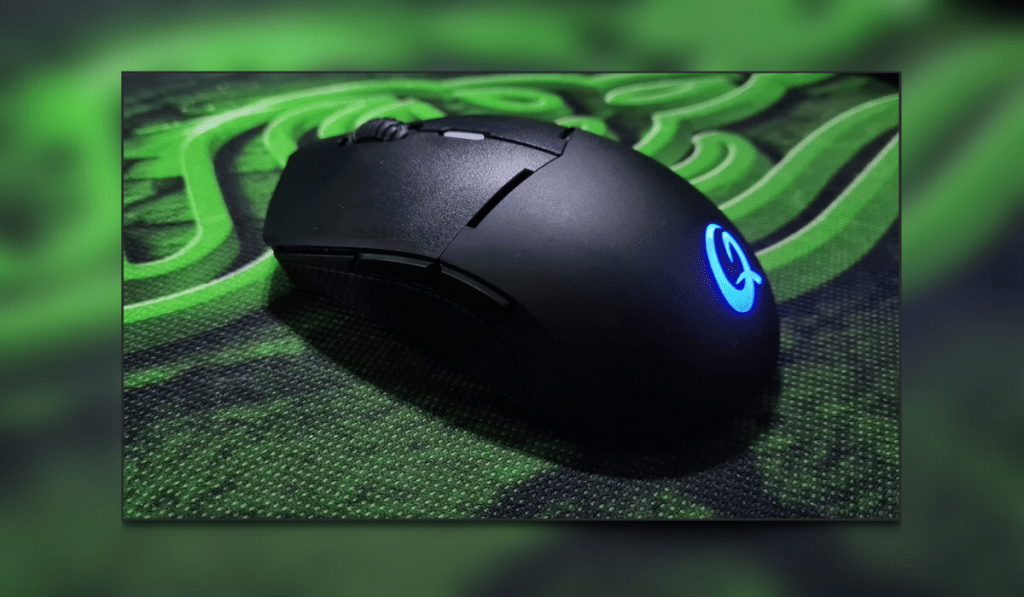 Having enjoyed the QPAD QH-700 headset, which I reviewed last year, I was keen to see what other products QPAD had available. They’re a relatively new brand in my eyes, but one that prides themselves on eSports quality products. Well QPAD kindly sent Thumb Culture some mice. In fact both a wired and wireless option in the form of their DX-700 and DX-900 respectively. In this review I’ll be focusing on the QPAD DX-900 Wireless Mouse but be sure to keep an eye out for the upcoming review of the DX-700.

As always I am a sucker for a well packaged product. When you’re spending money it’s nice to feel like you have a high quality item fresh out of the box, and the QPAD DX-900 delivers. As you open the box you’re able to glean your first look at the mouse and it looks really sleek. Sporting a fairly simple design it really does appeal to me. I currently use a Logitech G502 and the aesthetics of that mouse feel like they wanted a combination of function and stealth fighter. This is simpler and tidier.

At first glance it’s clear to see that the QPAD DX-900 is in a different style to my current mouse. Firstly it sports a symmetrical design lending itself to right-handed or left-handed users. Not only that but it’s refreshingly simple. Sporting a mere 4 active buttons (6 if you factor in the symmetry). Underneath you’ll find a DPI button and your on/off button too.

It’s in functionality I think the QPAD DX-900 will either find its audience, or lose the interest of many. When it comes to mice, and especially gaming ones, it’s hard to not think about all the different options on the market. Personally I find some of those options to be exhaustingly over-complicated. Whilst others, such as the QPAD DX-900, lean a little more towards the simple.

Let’s firstly talk about the feel of the mouse. I think it’s incredibly comfortable, and lends itself to my hand nicely. This is partly due to the fact it comes with 2 different body shapes you simply slide onto the back of the chassis. These magnetise in place so there’s no risk of things falling apart in your hands. These 2 options feel really novel and something that lends itself to tailoring this mouse to your preferences. This is also where the physical customisation ends, however.

My current Logitech G502 does also sport some very nice features such as the ability to modify the weight of the mouse, 2 ways to lock the mouse wheel and all of the buttons are all within hands reach. These are all missing from the QPAD DX-900, but this is mostly not a problem. Where it does become a problem is with the DPI. Thankfully in the software, you can tailor your profile and a number of DPI settings that the mouse holds. Unfortunately though in order to change the DPI you have to turn the mouse upside down. As someone who primarily PC games in the world of Rainbow Six Siege, I find it a little frustrating that I can’t quickly change my DPI to suit my loadout, without having to remove my control over the game; if only temporarily.

These problems aside, I have actually found the QPAD DX-900 to be wonderful to use. It feels really nice in the hand and moves around with ease. I’ve found switching to a wireless mouse quite refreshing and also the range of motion without any lag or glaring inconsistencies is wonderful. The 2 buttons on the side rest nicely where your thumb is and it really is very comfortable. I’ve found myself using it more and more over my Logitech, which speaks volumes to the comfort of use.

The QPAD DX-900 is a wireless mouse but comes with its own dongle. All you need is a USB port spare and you’re good to go. Chances are this isn’t a problem given most of the mouse market is USB based. What I have found though is that the software can be a little frustrating. Visually the software isn’t much to look at, but the problem is it also isn’t very intuitive. I feel like potentially I can remap the keys and solve my DPI frustration if I can play around a little more, but so far I’ve not cracked that conundrum. I’m also not 100% convinced with the battery level indicator. In the screenshot below it shows 100% but this is after a lot of use in-game and on desktop-based applications.

That being said, the mouse works incredibly well. For context when I’m at my PC I’m not only a gamer, but I also do a lot of Photoshop work, as well as other day-to-day tasks. I’ve found the QPAD DX-900 flawless to use in all of this and certainly have faced no lag or latency issues.

QPAD has delivered a really nice piece of kit in the QPAD DX-900. Whilst it lacks some of the functionality of my current mouse, I’m only really missing better control of the DPI. The look and feel of the mouse is much more appealing to me. The matt black finish is not only comfortable, but looks nice. If you’re not an RGB fan there’s a lot of control there too, including turning the light off entirely.

I award the QPAD DX-900 with a Thumb Culture silver award, I think QPAD are definitely delivering on some quality affordable products. I do feel though that I’d like to see them grow and deliver some of the more advanced features in the future.

Disclaimer: The QPAD DX-900 was received in order to write this review. 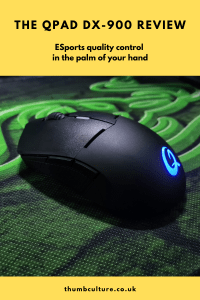