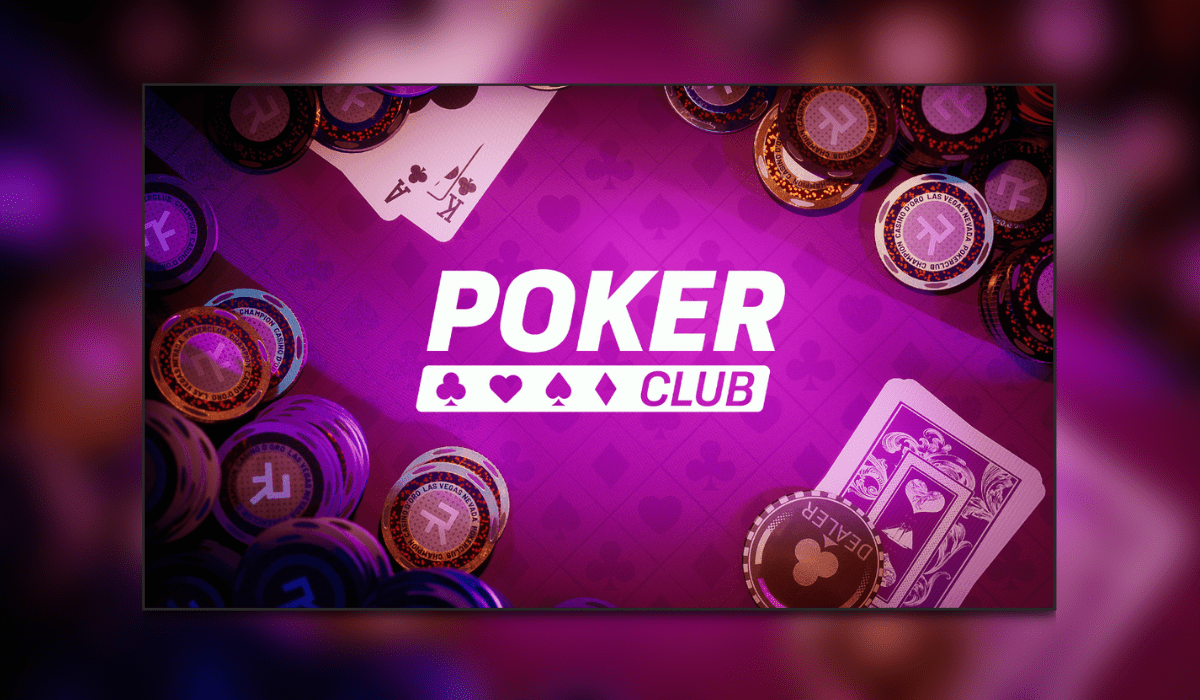 Once upon a time, I considered myself to have the best poker face in all the land.  I was that confident in my playing that when I was a bit short on cash for the month, I would organise a game with an ex-girlfriend’s family.  I did this knowing full-well they just weren’t very good at the game and we would fleece them every time.  Also, playing poker until 4am after hours in the pub I used to run, these were good times, but they were a very long time ago.  The less said about that poker club, the better!

The only time I have played poker since has been in the form of mini-games in games such as Yakuza and Red Dead Redemption. So it’s fair to say that my experience since has been a bit lacking, that’s why I was keen to see what Poker Club had to offer.

Poker Club – Is It A Flop Or A Royal Flush?

Poker Club is the latest from publisher and developer Ripstone Games who are responsible for the Pure Series (Pure Poker, Pure Pool, and Pure Chess).  The game was released in November 2020 on PC, PS4, PS5,  Xbox One, and Series X/S.  You can check out the PC review here.  So, let’s see how it fared on the PS4.

First off, you need to create your unique character which is going to set you apart from the others.  The customisation options were a little lacking, but somehow I was still able to create one similar to how I looked.  Through the course of the game, there are items to be unlocked such as clothing, accessories, and items you could have on the table as your lucky charm.

With me being me having the best poker face in the land, I skipped the tutorial and got straight into it.  I did revisit the tutorial and it generally does a good job of explaining the rules and specific terms you will need to know if you want to be a pro like me. So with the tutorial and character creation out the way, it’s time to check out the Tour mode.  When I got to my table, I wore a tiny reminiscent smile on my face.  It reminded me of the back room of the pub I used to play in.  Low lighting, not many people around, some guys just playing pool behind us.  Just nice and chilled.

This is where you essentially start your Texas Hold ‘Em career.  Yes, Texas Hold ‘Em is the only variation of Poker on offer here.  From here, the more you win and complete objectives,  you will then go on to play more luxurious places.  Naturally, as the quality grows, so do the buy-ins.

Of course, you don’t have to just straight into your career, there are various tournaments to take part in as well.  These are just ways you can boost your pot or if you want to go head to head with an AI, that’s also an option.  I hope that with further updates this will change by adding different variations, modes, and venues.

I found the gameplay really quite slow and sluggish.  There was never anything to really add to the anticipation of the next player’s turn  The problem is, Poker is a game about reading people and banter.  The AI are stone-cold, totally unreactive, and impossible to read.  Possibly the best Poker players ever.  But it would have been nice to have some sort of reaction based on the cards they are holding.  The only time you would know if they’re holding anything worthwhile is when they start raising by silly amounts.  And it is often the same amount each time.  Regarding the AI, there is very little in the way of strategy and psychological warfare.  It’s these things that make poker fun.

So as Poker is best played with actual people, myself and some of the Thumb Culture gang hit the tables in a little online session.  This is probably where I enjoyed myself the most as we were just having a laugh.  Unfortunately, the gameplay is just as slow.  I would have thought with cross-play that the tables might fill up quicker, but that wasn’t the case.  Empty seats with soon filled with the butts of bots.

In terms of your surroundings and venues, the graphics do a good enough job.  You can play the game in third-person or first-person.  I would recommend playing in first-person to soak in your surroundings, but this does put you at the mercy of some creepy-looking players.  However, some of the detail on the table and your hands when looking at your cards is really quite good. Considering the game isn’t exactly pushing the limits of the PS4’s processing power, there are definitely improvements to be had.  But that being said, they are easily passable for a last-generation title.

I found the audio to be better than expected.  I played with my Sony 2.0 headset and was able to pick up everything that was going on inside and outside the venue.  The audio was probably the most immersive thing about Poker Club.  Reminded me of old times sitting there and hearing police sirens outside.

Now if this game was in VR, this could be a whole different review.  I personally would love to see that implemented in this game in the future.

This really depends on how much you like poker.  Poker Club is one of those games you could just play a few hands to pass the time. Or, you could INTEND to play a few hands and before you know it you have lost the afternoon.  It’s really as long as you want it to be.  Additionally, with online play and the ability to make your own club and play with a community, there could be a lot of fun to be had for hours.

Did Ripstone do anything new here?  The short answer is no.  As a Poker game, it is functional and does what it says on the tin.  But, there are more ways to play poker than Texas Hold ‘Em.  The lack of variation and excitement really brings this down for me.  Sure, there is some fun to be had, it’s not totally awful by any stretch.  But if it just had a bit more variation, better character models, and faster gameplay, I would happily come back and play Poker Club time and time again.  Hopefully some updates can change my mind, but as it stands, I award Poker Club the Thumb Culture Silver Award 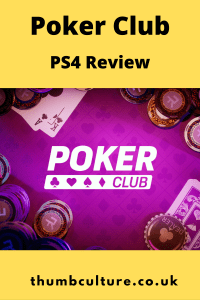