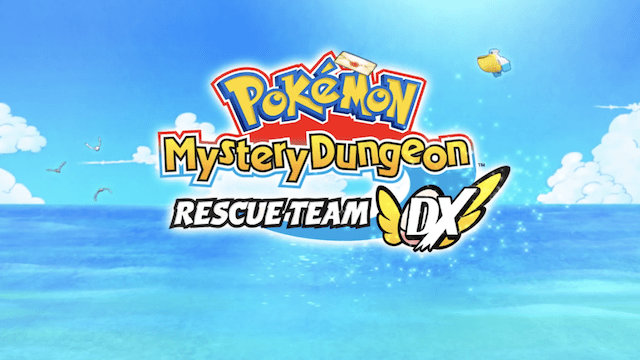 The Pokemon series has had a plethora of spin-off titles ranging from Picross to Pokken. As the Switch enjoys recycling games more than Snorlax enjoys a snooze, we were bound to get more remasters. Next on the long list of ports and re-releases is Spike Chunsoft’s remaster of their first two Pokemon Dungeon games, which have been re-worked into one complete title: Pokemon Mystery Dungeon: Rescue Team DX – catchy right?

The game starts with a personality test. You answer a range of questions to determine your spirit Pokemon.

“Psyduck? What the…” but don’t worry, if you are not happy with the Pokemon selected based on your answers, you can select one of the 16 Pokemon as your main character and an extra one to take the mantel of being your partner.

The plot is at the forefront of the game and as a result of this, there is a lot of on-screen dialogue which may discourage younger gamers. The story starts when a human wakes up to discover that they have been turned into a Pokemon. Stick with me. As a result of this, you are on a journey to rediscover your past and whilst doing that, why not kick the crap out of other Pokemon you stumble across in dungeons?

The procedurally generated dungeons are where the game falls short. Unfortunately, they are a simple and repetitive affair. You will be plonked into a map where you collect items and battle enemies in order to complete an objective, which is usually ‘find someone’ or ‘collect something’. Unlike traditional Pokemon games, the battling takes place in the same environment, however, fights seem to have a lot less strategy. The game almost plays itself, you can simply press the ‘L’ button so that the characters explore the area for you and then the ‘A’ button and the game will pick the best attack for you, which seems to go against the RPG, turn-based foundation of the game. Playing the game without using these elements still provides little challenge, making the game feel like a passive experience.

Movement in Pokemon Mystery Dungeon: Rescue Team DX is quite jarring. In the hub world, movement is how you’d expect but the dungeons are on an invisible 8 directional grid. Due to this, the game’s transition from one area to another feels a little Oddish.

The game’s art style is reminiscent of the artwork featured in classic stories such as A.A. Milne’s Winnie-the-Pooh. The almost watercolour painted characters make the game come alive. The mini-stories and characterisation are selling points of the game, as they help to build an interesting world that fans of the series will want to explore. Unfortunately, the dungeon design is a little bland and doesn’t alter enough when replaying the same areas (which you will need to do a lot). On top of this, the animations can glitch out when traversing dungeons, especially when going around corners. More often than not, Charmander would continually spin whilst moving around in the dungeon which is disappointing to experience in a game that has a high level of polish with the graphics.

Swaying from hypnotic to infuriating, the music in the game is definitely a product of its time. The main theme and sound effects are conventional but do help to set a whimsical tone that complements the graphics and anchors the game in the fantastical world created.

This is a game that has endless hours of replay value but is the core gameplay loop entertaining enough to keep you coming back for those berries? This is very much dependant on your affiliation with the series, previous spin-off games and age. If you enjoyed the original titles, you know what to expect and you won’t be disappointed with this remaster. However, if you’re a fan of the mainline games and need more Pokemon in your life, wait for the Sword and Shield expansion pass.  Lastly, if you’re looking for an easy title for the little one, then this is a simple and accessible title for gamers of any age.

Pokemon Mystery Dungeon: Rescue Team DX is a passive dungeon crawler aimed at people who want to play a relaxing game set in the Pokemon universe. With a classic cast of characters and excellent art style, this game will keep fans of the original pleased whilst entertaining those who want something to jump on whilst watching Netflix. However, those who are after a deeper Pokemon experience may want to give this one a miss. Due to this, I give the game a Thumb Culture Silver Award!