Planet Zoo is an upcoming management and construction simulation game developed & published by Frontier Developments. The game is a spiritual successor to the studio’s Zoo Tycoon release and gameplay similar to that of Planet Coaster. 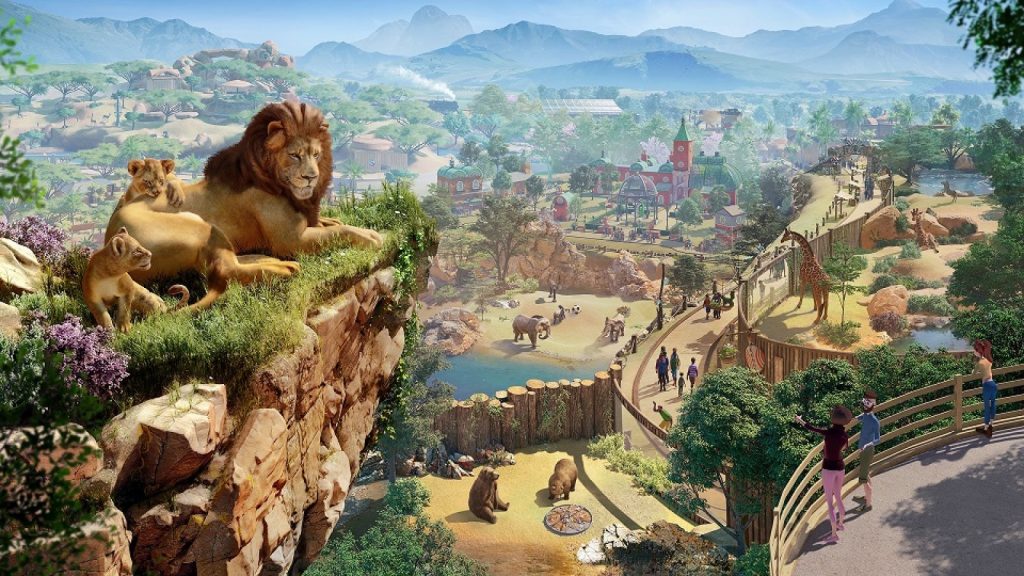 “Manage an amazing living world that responds to every decision you make. Focus on the big picture or go hands-on and control the smallest details. Thrill visitors with iconic exhibits, develop your zoo with new research and release new generations of your animals back into the wild”.

Planet Zoo is scheduled to be released on 5th November on PC via Steam and you can pre-order today for £34.99 or £42.99 for the deluxe edition.

Planet Zoo is quite simply the ultimate zoo simulation game. It features authentic living animals who think, feel and explore the world that you create around them. With over 30 animals to nurture (over 50 in the full release) in your very own zoo, you can create habitats and unique landscapes to allow each type of species to live, play and help raise families in their own environments.

Why don’t they play poker in the zoo? Too many cheetahs. (Sorry, I had to start off with a joke)

I was given the delightful opportunity to try out the Planet Zoo closed beta which ran from the 24th September through to 8th October (available to anyone who preordered the game on Steam) which gave you access to both the career and franchise modes. The career mode served as a tutorial which takes you through the steps of the game in creating your zoo, by building habitats, adopting animals and a range of objectives to accompany these. Franchise mode is a kind of do anything you want type mode, with a sandbox map and a deeper simulation experience and a way for players to connect online & trade.

As I jumped into the career mode in which your tasked to help out the “Goodwin House” zoo, (named after the owner “Bernie Goodwin”) I started off being really impressed with the visuals of the park as you roam around at your own free will, I was there for a few minutes just looking around in great detail, loving it, taking it all in before I suddenly refocused and noticed I had to actually play the game. After a brief dialogue with the owner, you met the “Headkeeper” named “Nancy Jones” who gives you simple tasks in order to get up to speed on how to play the game. And guess what? She is Welsh!!! A nice little one up to Wales there, being Welsh myself. Good ol’ Nancy asks you to help her with tasks like building habitats, feeding & hydrating animals, adding plants/trees to their habitats & adding fun toys to help animals play, and many many more. 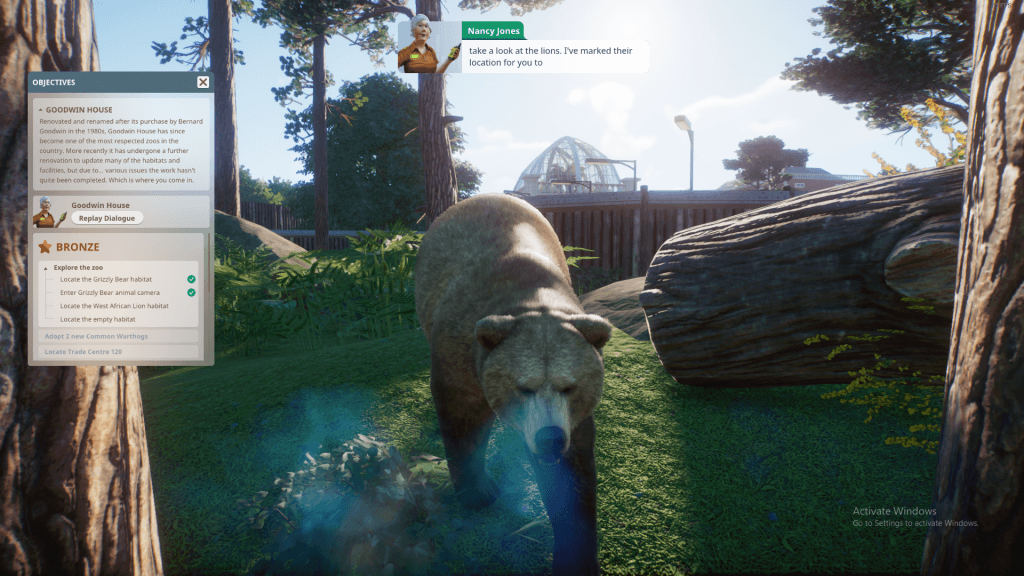 One task I had was I was introduced to the hugely impressive grizzly bear habitat. Wow, what can I say, I couldn’t believe what I was seeing. The absolute realism of the bears was by far the most impressive part of the game so far and it was almost jaw-dropping, to say the least. I haven’t been to a zoo probably since I was about 5 years old, but this felt like I was somewhat there. After continuous hours with Planet Zoo you’re introduced with Warthogs, Ostriches, Tigers, Indian Peafowl umm yea I know what those are ha, Snow leopards etc as your aiding the zoo in becoming better.

With all this said about how stunning Planet Zoo looks the performance is going to be just as good yes? Nope, unfortunately not. I was struggling big time with performance issues and bugs. I had to replay the first half hour twice, then the opening part of the game kept closing down on me after that. I must remember that this is to be expected as this is only a beta, but it was extremely annoying when the major issue for me I kept encountering was just simply moving the cameras around the zoo. It would freeze, get stuck in the ground & sometimes a specific direction would just stop working to the point where I had to restart the game…..many times. Another issue I found was stuttering of the game, it would take a second or 2 to come back which was again was due to when you move around the zoo. I also encountered where my Tigers escaped their habitats, and it wouldn’t allow me to put them back in, or wouldn’t tell me what I could do to fix, so guess what? I had to restart again. 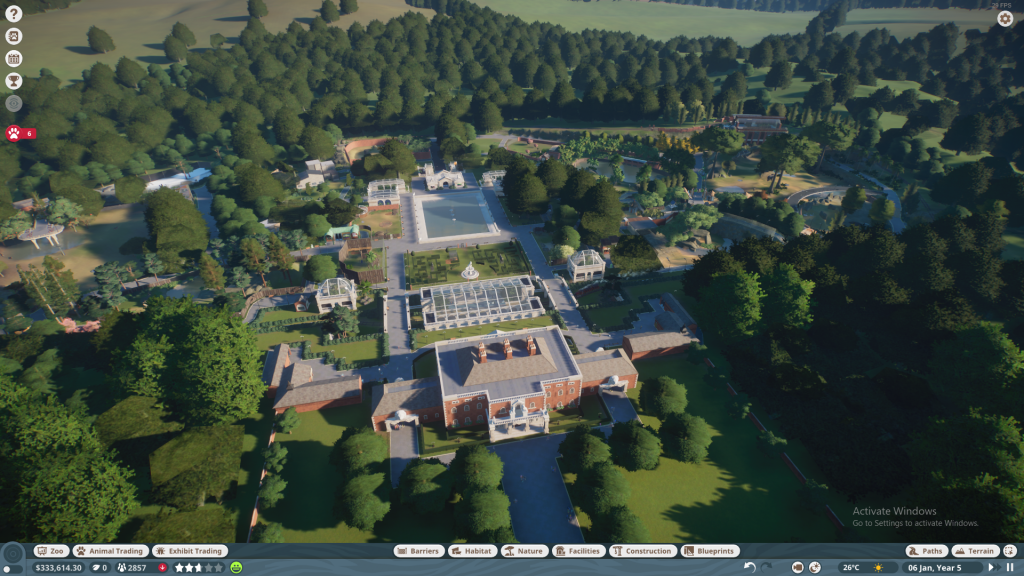 Now if other games were constantly having these kinds of problems then I would have given up, but there is something about Planet Zoo that made me keep trying, kept coming back especially after they had released new updates. After a 4gb & 3gb update during the beta, I did see a slight improvement in performance which was better.

I played this game on my Geforce 1060 GTX on high settings and graphically it looks stunning, but as I have mentioned above Planet Zoo is far from perfect. There were framerate issues, I was getting around 35-50 FPS but it was quite up & down at times. The game needs to be optimised better, as it can be very frustrating with problems just simply moving the cameras around, but from what I’ve read on the forums the developers are working hard to address these. At times Planet Zoo is can be a little bit unplayable, but when it does run properly, its shaping up to be an excellent management sim.

It’s quite a quiet game. The slight sounds you hear are of kids, parents & zoo fanatics roaming around the park, birds singing & animal noises is just about it apart from our good ol’ friend Nancy chatting away to you helping you along the way. This is not a bad thing, it’s a nice relaxing game to play. I was interested to find out if the actual animals sounds in Planet Zoo were real, and having researched what Frontier Development had said regarding this, they explained that they have an extensive digital library of real animals sounds, but also use a technique called foley which is the process of reproducing everyday sound effects, so sounds like they use a bit of both for the game. 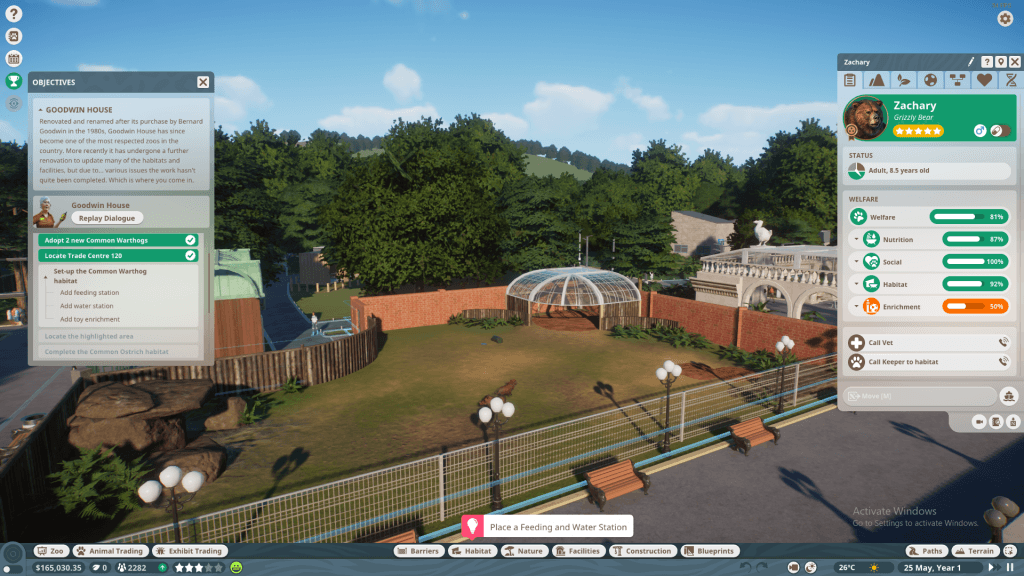 Well as you probably know these type of games you can spend many many hours getting lost in especially with Planet Zoo. There is a lot to do and when you’re trying to keep your animals stay fed, hydrated, making sure their habitats & welfare is above normal on a daily basis, then the hours will just fly by. Don’t forget as well the annoying protesters that don’t like animals being caged up, or if they are being treated harshly, these things will almost certainly keep you on your toes. You will have a great time IF the game works properly when it’s fully released. 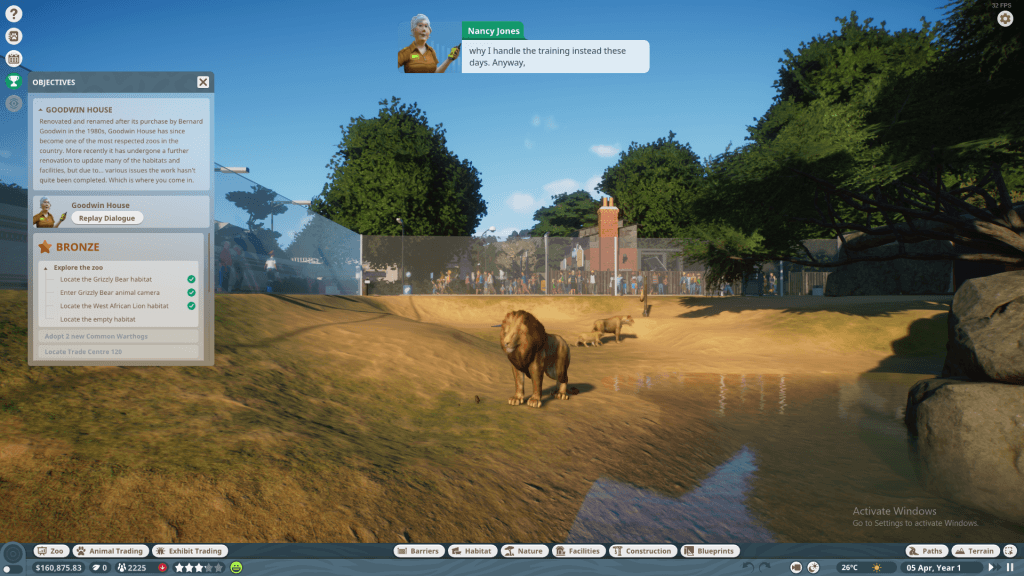 There’s definitely a lot of room for improvement for Planet Zoo before the full release on November 5th. I am hoping that these issues get fixed and I am optimistic that they will. Whether your an animal lover, a fan of Frontier Developments previous games, a zoo enthusiast you will definitely want to pick up Planet Zoo.

I enjoyed my time on the beta, I can’t think of many games where I stick to something regardless of issues, it was frustrating at times but with stunning views of the park and near life-like animals to help nurture, along with hopefully giving that great experience to the young kids, Planet Zoo is definitely a game I want to play when it arrives.

Did you hear about the zoo where the only exhibit was a dog? It was a Shih Tzu. (I will leave it there)