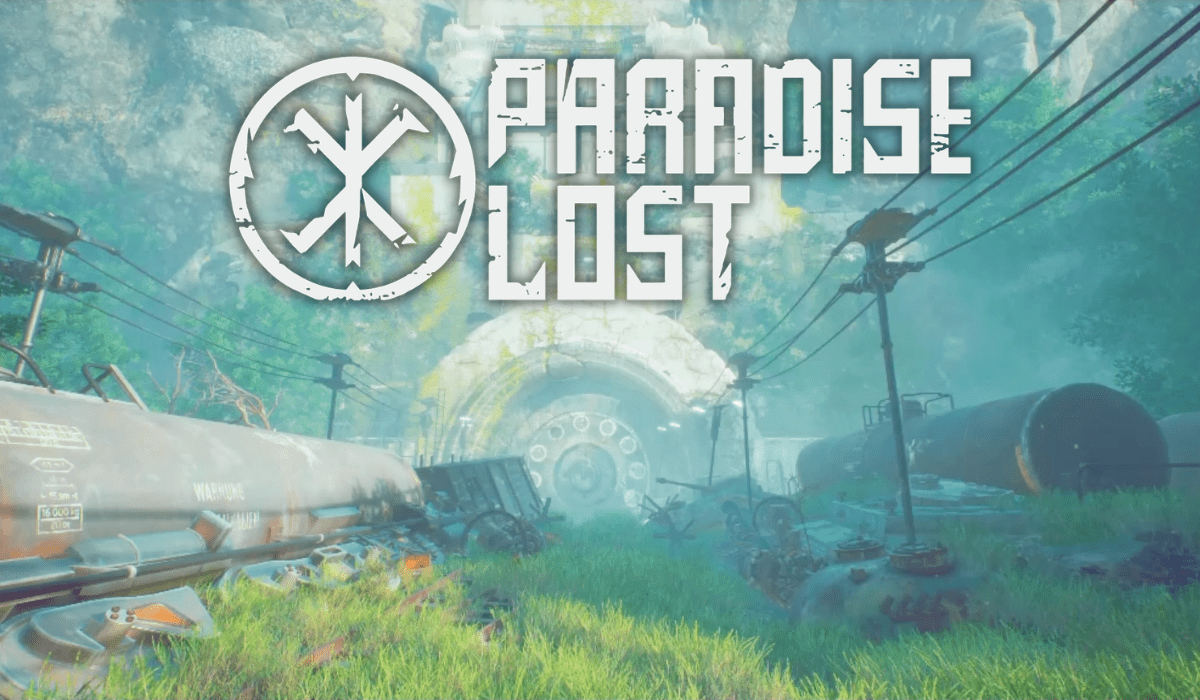 World War II games tend to lend themselves well to an alternative history, take a look at the Wolfenstein games for instance.  But rather than blasting Nazis to bits, Polish developers PolyAmorous offer us something a little deeper than guns blazing, retro-futuristic technology for their debut title, Paradise Lost.

Paradise Lost was developed by PolyAmorous Games and published by All In! games and released on March 24th, 2021 on PlayStation 4, Xbox One, and PC.

The Mind Is Its Own Place, And In Itself Can Make A Heaven Of Hell, Or A Hell Of Heaven – John Milton (Paradise Lost)

As a huge fan of World War II history, I could not wait to see what alternative path the developers had come up with.  If you have played Paradise Lost, let us know in the comments below.

The war had raged on for a further 20 years.  Fast forward to present day, 1980.  Europe is now a post-apocalyptic wasteland thanks to Nazi nuclear missiles.  You are Szymon, a 12-year-old boy who has recently lost his mother.  It becomes immediately apparent that throughout this gem you will be dealing with the five stages of grief; Denial, Anger, Bargaining, Depression, and Acceptance.

As you wander the wasteland of Poland searching for a glimmer of hope, you come across an abandoned Nazi bunker.  Your descent into the bunker and a world of mystery and secrets begins here.

You notice something familiar about this bunker upon entry.  You pull out a photograph of your late mother standing with another man.  The symbols are identical to those which are in the bunker.  Is Szymon somehow connected to this gloomy and forsaken place?  Before long, you manage to establish a radio communication link with a woman called Ewa.  It isn’t until much later you connect personality similarities to that of Eve from the epic poem Paradise Lost.

Ewa will help you navigate the subterannia which you discover was created to shelter the next generation of the Aryan master-race.  This was known as the Ark Project, and as a result of this shelter, the new Aryan race would emerge into the post-nuclear world.

Paradise Lost is essentially a mystery game in which you walk from place to place, listening to audio logs and reading notes, and manifests to slowly unravel the bunker’s true purpose and its dark past.  The scale of the underground structure is astounding.  Was quite weird to be roaming a city, to look up and see no sky, obviously because you’re underground.  Although the imagery of the bunker was both dark and grand, I was a little disappointed being unable to explore.  There is little scope for deviation from the allotted path.

There are a handful of locations where the paths branch, but that will mean forgoing the other one completely which is a bit of a shame.  I would have liked to have backtracked and explored more of my own free will.

Controlling Szymon is as easy as simple as walking from place to place and interacting via on-screen prompts.  There is some minor puzzling to activate the computer terminals known as E-V-E.  Do you see the pattern here?  E-V-E is an AI in control of the bunker’s agricultural and security systems.  These terminals also act as interactive memories.  Here you will learn more about the man you are trying to locate, his identity, and what he means to you.

As the story goes on, you have intermittent communication with Ewa.  Because it was intermittent, I found it difficult to establish a meaningful bond with her.  Although that isn’t necessarily a bad thing when it comes to making your final decision at the game’s conclusion.  There are some choices within the dialogue, but ultimately they are without meaning and affect only that conversation.  Pay close attention to the clues.  They all build a story as to how Szymon, Ewa, the mystery man, and Slavic Paganism are all connected.

For a first game, I found this graphically quite impressive.  Not award-winningly impressive, but impressive nonetheless.  More so in some places.  The environments both inside and outside (but still in the bunker) were quite detailed.  Although, the objects and assets within the game not as much.  The open areas were quite expansive and often majestic and imposing in their appearance.  I was amazed at how the Germans could have created this vast city underground regulated by an AI.  There was a small amount of texture pop-in from time to time, but it didn’t take away from the slow-paced experience of the game.

Sonically, this game is definitely a ‘less is more’ kind of thing.  There are splashes of a musical ensemble here and there, and the ambient effects do make you feel rather lonely at times.  I would say for this type of game, the balance of the audio is just right in that respect.

Though I myself do speak a little Polish, at a couple of points in the game I was left wondering what was being said.  The majority of the dialogue is English with English subtitles, but any Polish dialogue was accompanied by Polish subtitles.  For authenticity, I personally would have preferred the whole game to have had Polish dialogue with English subtitles.  I feel that would have added a little something extra to the game.  But it is important that the developers recognised that this probably doesn’t sit well with the majority of players and opted for English.

Paradise Lost isn’t challenging in any way and can be finished in an evening.  There is a modicum of replayability as there is another ending based on what your final decision will be at the end.  That’s not to say this is a bad thing.  Not all games are meant to be played for hours and hours to squeeze everything out of it.  The pacing of the game is pretty much perfect for an evening playthrough.  It all really depends on how much you want to learn about the history of the bunker and what horrors it hides.  As a narrative exploration, if it was any longer it would just be filled with meaningless information and would lessen the experience.

Q&A With The Developers

I was lucky enough to catch up with Chris at PolyAmorous Games and he kindly made some time to answer a few questions.  Here is what Chris has to say.

Thumb Culture:  Out of all the games you could have made, why this game? Where did the idea of an alternate history come from?

Chris:  Our founders wanted to make a game that at its essence was a thoughtful reflection on loss. Being in Poland, where the memory of the Second World War, the devastation it caused, and the way it changed the course of history are prominent, that was a natural source of inspiration. In the south of Poland, there is a bunker that the Nazis started building but never completed. Nobody knows what it was for, and that mystery triggered the idea for the alternative history.

Thumb Culture:  From the idea to the finished product, how long did it take to complete. How has the game changed from your original vision and what challenges did you have to overcome?

Chris: The concept for the game was conceived over 8 years ago, and was made over the course of the last three and a half years, starting with a small team of four people and gradually increasing to a final team of 20. The game’s story and structure changed a lot in that time. Our main challenge was managing our aspirations with the resources at hand. As the studio’s first game, we naturally encountered some growing pains, but we’re all the wiser for them.

Thumb Culture:  With PolyAmorous being a Polish development team, were there any personal stories to inspire the writing?

Chris: No, it was only a reflection on history. The tragedies and horrors of the Second World War are still fresh in the memories of many Poles and we feel bringing them back to life would have been disrespectful. This is another reason why we were drawn to the alternative history approach.

Thumb Culture:  How much research was carried out to make Paradise Lost a plausible alternate reality?

Chris:  We did a lot of background reading so we could make the world as vivid and realistic as possible. Whether it was Nazi experiments or Slavic mythology, we made every effort to base Paradise Lost on known facts about the past so we could weave them into this awe-inspiring setting.

Thumb Culture:  Do we expect to hear from Szymon or even Ewa again?

Chris:  It’s early days yet, but never say never!
A huge thank you to Chris and PolyAmourous Games for taking the time out to answer my questions.

If you have an evening spare and have an interest in World War II (or even if you don’t) and alternate timelines, then definitely give this one a go.  Though I was slightly disappointed by the inability to fully explore, I was drawn in by the environments, lore, and story of Paradise Lost.  Keep an eye out for any cheeky nods to the epic poem of its namesake.

I was quite taken aback at how much work had gone into concealing a huge sprawling city within a bunker.  This is a credit to both the developers and the engineers and architects of this fictional world as it seems an impossible feat. 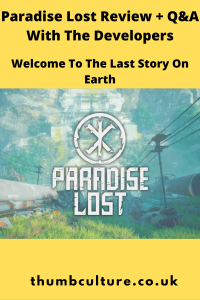