Back in the mists of time (well the 1980’s) before the arrival of the home computer the only place to play the latest video games was the local arcade. Developers Ivanovich Games have attempted to recapture this nostaligia with Operation Warcade. Following a successful debut on Occulus and Vive, Perp Games have now published Operation Warcade on PSVR. Those of us of a certain age will remember the arcade classic Operation Wolf and it is very obvious that Operation Warcade is a homage to this classic shoot em up. From the virtual UZI 9mm submachine gun to the 80’s style arcade graphics the game is a love letter to the arcade games of our youth. So nostalgia aside is Operation Warcade worth your virtual quarters? 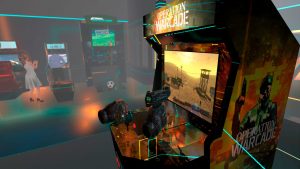 You start the game in the aforementioned virtual 80’s arcade standing in front of the Operation Warcade arcade cabinet. The initial presentation of the game and indeed the gameplay depends on which control method you decide to use to play the game. Operation Warcade can be played with the Dualshock, Move or Aim controllers. I chose the Aim controller and found this the most satifying and immersive of the three options. If you play with two Move Controllers you have an UZI in one hand and a grenade in the other. The dual shock is similar although grenades are thrown with a press of the L2 button. When using the Aim controller the two hands are replaced with an assault rifle with a grenade launcher attached for good measure.

If you chose to play the game with the Dualshock or Move option you are presented with a choice of two arcade cabinets at the start of the game, the Classic 3D Edition or the Immersive Edition. With the Aim controller you get the Immersive Edition only. Both editions are essentially the same however the Classic Edition is a run of the mill arcade version which sees you shooting the mounted Uzi at the screen and progressing through the levels in a linear fashion. The immersive edition is the most fun and gives you far more freedom. You can lean forward a little bit in to the screen and shoot approaching enemies from acute angles before they appear on the screen in front of you. The immersion points (hence the name) also come into play here (more later)

The initial perspective takes a little bit of getting used to. You are seemingly perched up rather high looking down at the battlefield. It is a side scrolling shooter so there is no need to move your character. You can avoid incoming bullets and throwing knives by moving your body out of the way or using your UZI as a shield. The enemy infantry and vehicles are rather small and bring to mind the protagonists from that classic of the tactical shoot em up genre, Cannon fodder. However if you shoot one of the glowing boxes containing an arrow you are immediately dragged into the game and the enemy and their vehicles become more life size. The immersion points are varied and you could find yourself driving an armoured personnel carrier, flying a plane, manning a machine gun on a helicopter, sniping from the distance or fighting at close quarters with a shotgun to name but a few. This is where the game really comes into its own and it is a shame that you can’t play the entirety of the game in this mode. There is a delay when you move from side scrolling mode to immersion with the screen going black for 30 seconds or so. Initially I found this annoying however as the game went on and the action became more frantic it served to give you a breather before being thrust back into the heat of battle.

The environments/battlefields used in the game are your standard shoot em up fare, with Desert strike style bases, a tropical river/jungle setting and urban cityscapes to name but a few. The enemies and vehicles are also straight out of central casting with armoured cars, fighter jets, tanks and drones and attack boats all making an appearance. Infantry are either you standard grunts or knife weilding assassins who run screaming at you in immersion mode. 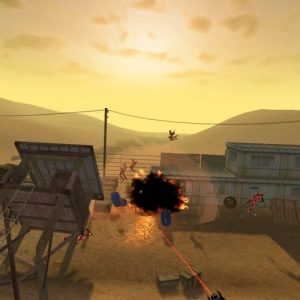 As the game is essentially a replica of an arcade game (albeit with an immersive aspect) there is absolutely no story line to the game player. You have no idea who you are, what you are fighting for or who you are fighting against. This in no way spoils the game and is actually quite refreshing. It’s nice to have a break from lengthy cut scenes and convoluted story lines once in a while!

As you progress through the game you attract an ever growing crowd of spectators around the machine who applaud and cheer you at the end of each level. I must admit that I found this rather unnerving as our adulatory NPC’s looked a little bit like extras from the walking dead or the result of a spice epidemic breaking out in the arcade. Sadly I was unable to turn around and send them packing with my trusty assault rifle….shame! 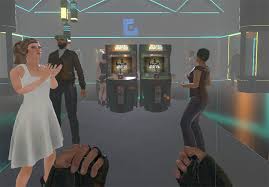 It is very clear from the outset that the game is trying to recapture the shoot em up arcade games of the 80’s. The graphics therefore are unashamedly from this era. The environments are simple, rather blocky and the enemy soldiers lacking in detail. Whilst playing the immersion points the graphics do improve as the enemies and environment grow in size however they do not stray from the retro look the developers were obviously going for. My personal view is that they have absolutely nailed it and if you expecting crisp clear HD graphics then this is not the game for you. I found the graphics reminiscent of Time Crisis and games of that ilk and all in all it adds to the charm and the retro feel. It is debatable whether this is a clever ruse by the develops to overcome the current limitations in the PSVR’s graphical capabilities but the game is so much fun it can forgiven. The game suffers from screen tear at times and a poor draw distance with enemies, vehicles and scenery popping into existence at the last minute but this solidly replicates the games to which Operation Warcade is obviously paying homage. 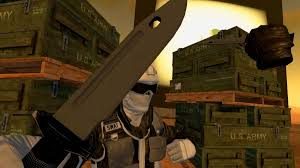 The audio can essentially be split into two parts being the in game music and the games sound effects. The music is excellent from the background music in the arcade to the pumping dance music soundtrack during game play itself. The ingame explosions, gunfire and enemy death crys strike the right balance between the retro feel and immersive realism. The audio really does assist in immersing you in the game and the developers must be congratulated for striking the right balance here. It would have been nice to have had some identifiable 80’s classics playing and perhaps this is something for the devs to consider for the next update/DLC.

In straight forward arcade mode the game is rather short. It is in immersion mode however that the game has excellent replayability. With over 108 missions over 36 levels there is much to keep you occupied. To progress  through the game in this mode you have to complete challenges to earn medals which enable you to unlock new levels and missions. The challenges might be rescuing prisoners, getting a certain number of head shots or not shooting civilians. Medals also allow you to upgrade your guns and explosives adding laser sights or specialist grenades among other things. There are also different guns and specialist grenades dotted throughout the levels which can be picked up by shooting the glowing boxes. My personal favourite was the gravity gun which allowed me to hurl vehicles and enemies across the screen. You won’t always complete the challenges on your first go so will find yourself replaying levels to get the necessary medals to move on through the game. This sounds tedious but is actually good fun. You often miss things during your first run through a level. I myself found the game very addictive and was happy to retry levels to get the medals I needed to progress.  In terms of comfort with the VR experience, the side scrolling action did not cause me to suffer from any motion sickness and I was able to play the game with ease for extended periods. 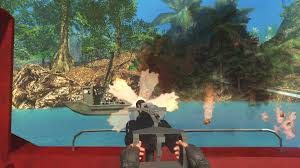 In essence Operation Warcade is a shameless love letter to the arcade retro classic such as Operation Wolf and Time Crisis. If you accept that and embrace the concept you will have a lot of fun. Many people are lamenting the games graphics however I think it gives the game its retro feel and invokes the games to which it is so obviously paying homage. The immersion mode offers longevity and I myself became addicted to it very quickly.

Therefore Operation Warcade gets a Thumb Culture Silver award and it is definitely a game I will be going back to in future to try and beat my highest score and stay top of the leader board!