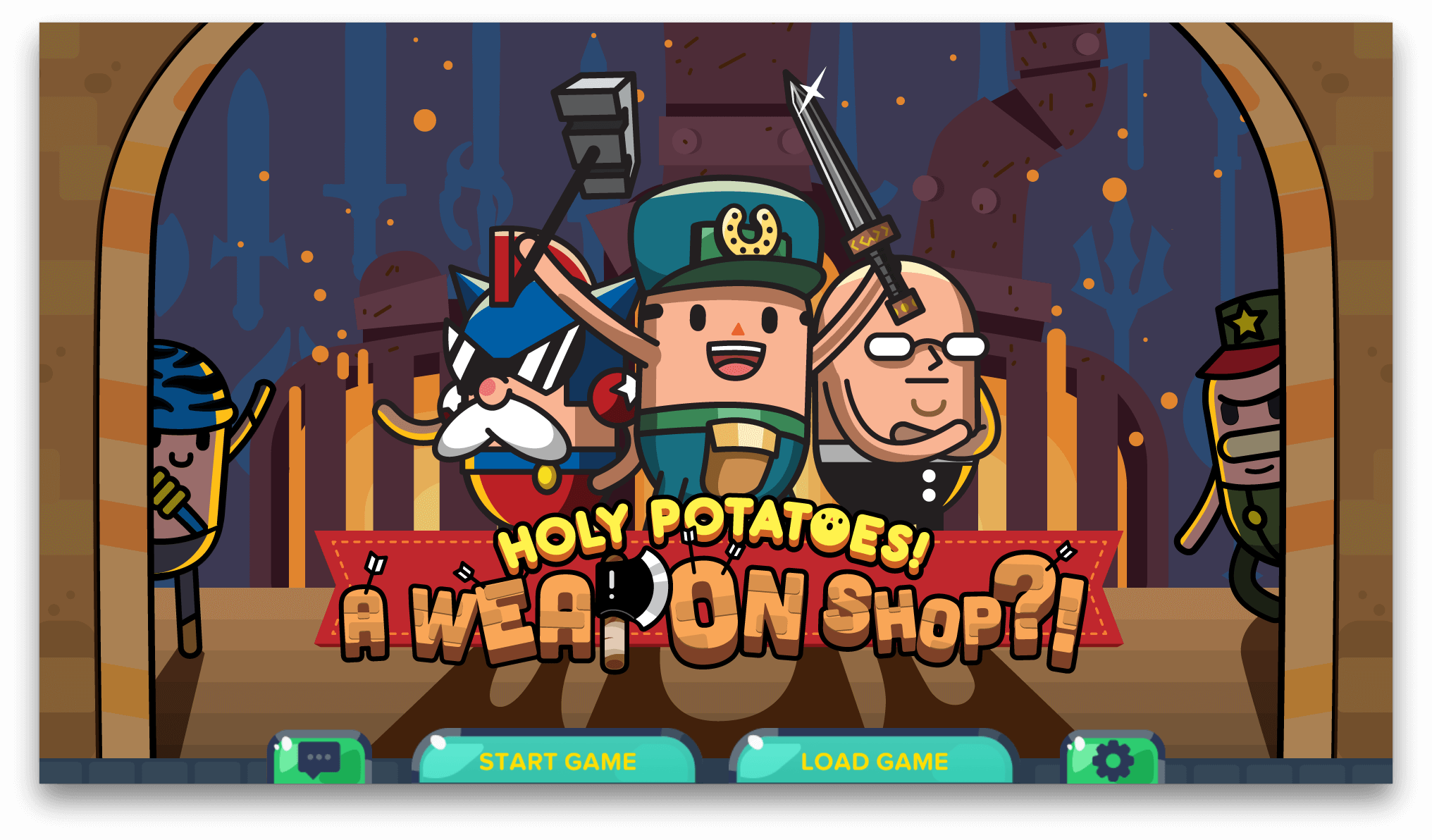 A game about potato people.  Seriously is this really a thing?  I remember Rimmer from the TV show Red Dwarf talking about the “king of the potato people” but has the delusion finally become a reality?…well in a way yes, yes it has!

Fresh out on PS4 and Nintendo Switch, Holy Potatoes! A Weapon Shop?! is a very strange simulation game developed by Daylight Studios based in Singapore, whereby you manage a team of potato people who work in a weapon forge.  Here you oversee the forging and selling of their wares to other potato folk who are looking for the right weapon for the quest they are undertaking.  I really couldn’t make this up, this is an “emerging genre” according to the press kit!

You control a potato who has inherited a weapon forge from his late grandfather and are taught the basics of the game from a mysterious chap named Agent 46.  Conversations appear onscreen with text appearing beside each character inturn.  Within your small forge you have 3 areas that you need to populate with potato smiths, there is a designer, a craftsman and a metal worker initially however you will eventually open up more classes later in the game.  You have the power to command each of the smiths inturn such as sending them to buy materials, explore a new area or sell at the marketplace and by performing these tasks you steadily level up their personal statistics in each field.  As mentioned earlier the aim of the game is to craft weapons for others to buy however there is a little bit of thought that needs to be put into it.

Each hero at the marketplace requires a different type of weapon along with a preferred ability added to it.  From finding this out you can then select a weapon to craft from the available blueprints and by hitting the touchpad you can select an ability boost to add to the weapon to enhance its stats and make it more desirable at the market place.  The boosts you can choose from are speed, accuracy and magic and these can be added, for a fee, by either one of your smiths or from a freelance spud if you are willing to pay more.  Currency in the game is humorously known as $tarch and this is used not only to pay for boosts and materials but also to pay your staff wages each month, something I totally forgot about and went bankrupt pretty quickly! Thankfully you can afford to do this 3 times as you get bailed out by the bank via a grant.

Once weapons are crafted it is off to marketplace via the worldmap, here you select which weapons you want to sell and which smith you want to use.  There are 4 possible heros at the marketplace that will make an offer for your weapons however it is down to you to select the correct one by matching their preferences.  It is not rocket science here however you need to try your best to get it right as not only do you want to make a good profit but the hero gives you a weapon rating which helps you increase weapon shop fame and a grade.  In turn the hero steadily increases their XP which rewards you by accomplishing challenges and gaining you travel tickets to aid the expansion of your shop through unlocking new global areas to buy and sell at.

In a nutshell that is pretty much the game mechanics.  Send a spud to aquire materials. Craft weapons from available blueprints.  Add a boost and then sell at the marketplace.  To jazz up the fairly monotonous tasks that lay before you there are random events such as “Choice of Fate” which poses you a random question with 2 available actions to choose from.  Select the correct reply and you will receive a temporary ability boost to one of your smiths, get it wrong and you receive a temporary handicap.  There are also world events that offer enhanced multipliers to XP earned by heros however you need to have the relevant area unlocked to take part.

Each time you select a smith and head them off to either explore, buy or sell you have the argeous task of where to put them when they return to the forge shop.  At first I thought “fair enough” however after 2 hours of playing I was still being asked where to place them and seeing as the smith can only really go back to their own coloured zone based on their class I found it all a bit tedious.

A cartoon world featuring potatoes sums it up.  Everything is colourful and detailed similarly to what you would see in games such as Castle Crashers for example where everything has a black outline around it and is fairly basic.  Nearly every action you take results in a flurry of sparkly explosions across the screen which tries to make you feel happy about what you have just achieved.

The gamescore for Holy Potatoes! A Weapon Shop?!  has been composed by Kimura Masahiko who helped out on the Castlevania series as well as the Genso Suikoden series.  Unfortunately I did find myself turning the volume down on the music as the repetition of the track got pretty annoying after a while.  Equally the random sounds from the potato folk that accompany their pop up thoughts are also in this drawer.

Having been released in 2015 for PC and mobile, its foray onto console seems a little puzzling as this is not the sort of game I would play on a Playstation but rather one I would possibly play on my phone while on a break.  The repetitive task of explore, buy, craft and sell with little other things to do just seemed a bit dull especially with the constraints of where you can go around the world.  Yes other areas will unlock along with blueprints and new quests however I just didn’t really feel challenged, I was just clicking buttons, waiting for the timer to countdown and then do it all again.  Holy Potatoes! A Weapon Shop?! is ok but just not my cup of tea when it comes to console gaming I’m afraid.  However this is merely my opinion and you lot may find this to be immense fun!

Disclaimer: A game code was received in order to write this review.