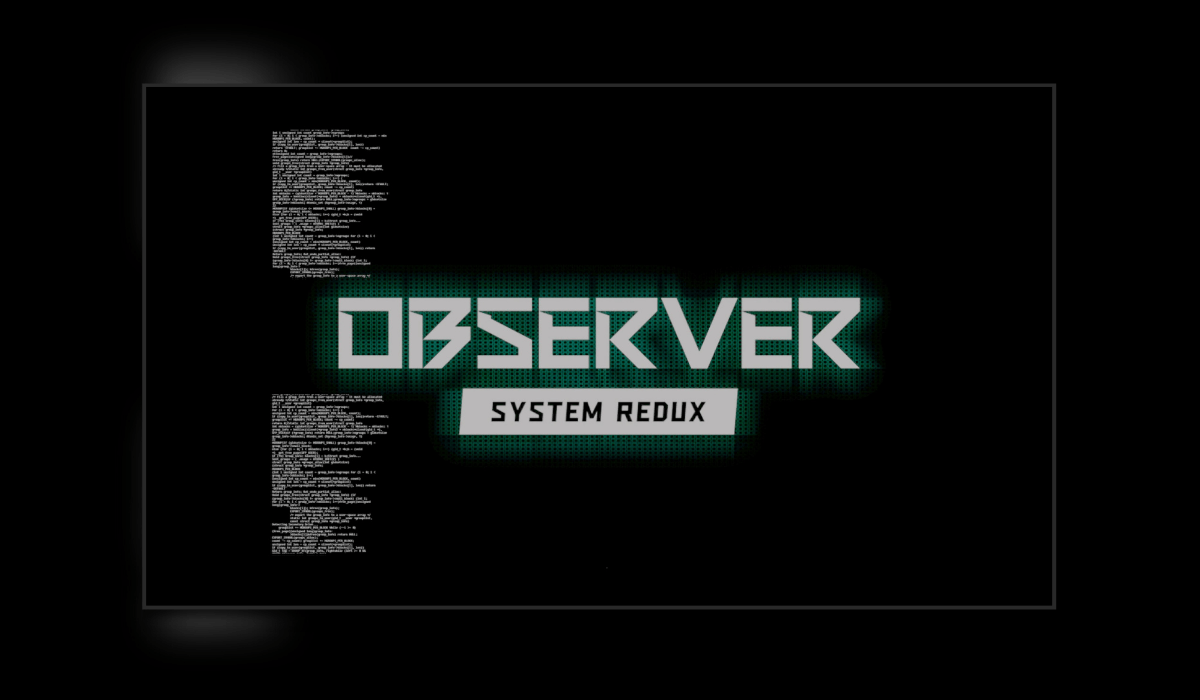 Way back in 2017, hot off the heels of Layers of Fear, developers Bloober Team continued the psychological horror trend with Observer. It would seem they have found their niche because Layers of Fear 2, Blair Witch, and The Medium followed. Observer: System Redux is the base game but with additional story content and improved graphics.

The game itself is evidently influenced by things such as the George Orwell book Nineteen Eight-Four, the Cyberpunk 2020 tabletop role-playing game, and the movie Blade Runner. It even stars our favourite replicant, the late Rutger Hauer as Daniel Lazarski, the titular Observer, or neural detective. More on that later.

Observer: System Redux – “All those moments will be lost in time, like tears in rain” – Rutger Hauer

Observer: System Redux was initially released and self-published in 2020 for PC, PlayStation 5, and Xbox Series X|S. It was released for the PlayStation 4 and Xbox One on July 16th, 2021 and it is the PlayStation 4 version I am reviewing. This is a horror like no other and it has to be experienced to be believed. If you liked this review, why not take a look at our review for The Medium, another horror by Bloober Team.

The year is 2084, and a dystopian Poland has seen its fair share of dark times. First, there was the Nanophage. A digital plague that has claimed countless lives by attacking those who are cybernetically augmented. This disease was caused by a faulty algorithm in the programming of nano-machines that was supposed to merge living tissue with the cybernetic enhancements. What’s interesting about this is how it is transmitted. Even though it is a digital disease, it can be transmitted both biologically and digitally, and even over WiFi. In the later stages, it will affect the inflicted’s biology.

Next came the Great Decimation. A global-scale war from which the Observers were conceived. An Observer is part of an elite police unit that is tasked with neural investigations using a device known as the Dream Eater. Originally the Observers were put in place to extract information during the war.

So now our story begins with Daniel Lazarski, an Observer, voiced by Rutger Hauer and played by you. While attending a routing murder investigation you receive a call from your estranged son Adam. You trace the call back to an apartment block in the Class C district, a place reserved for drug and hologram addicts. “Oh Adam, how did you get so low?”.

You arrive at his apartment to find a headless corpse, naturally. As anxiety brews, you fear the worst. Could this be Adam? Through examination and investigation, this person met his demise before the phone call. So, your objective is to find Adam. Now, it’s time to dive deep into that rabbit hole. Remember to take your synchrozine, a drug administered by opening up your status window. Here you will also have information on current investigations. If you start hallucinating or are stressed, pop a pill and all will be well.

Observer: System Redux takes place pretty much in just the apartment block, except for neural investigations which offer a respite from the maze of corridors. If you choose to roam the corridors, you will pick up side investigations, find secrets, mini-games on computers, and many easter eggs.

You will investigate in a few ways which reminded me a little of the Batman Arkham games. Your bio vision will allow you to scan the scene and will pick up biological matter. You will analyse wounds, blood, and even seminal fluids to aid your investigation. EM vision will pick up electronics, for example, if someone has an I.D. inhibitor implanted, you will have to find another way to identify, through blood or any other means. Night Vision is especially useful for those dark areas, and for the most part, it is quite a dark game. But, this is essential if you don’t want to miss a crucial piece of evidence.

The more you explore, the further down the rabbit hole you go and some of the imagery is satisfyingly disturbing. This brings me on to the final method of investigation, through the victim’s neural link with your Dream Eater. What a name! This is where you will connect directly to the victim and explore their memories, and oh man was I not ready! You are essentially hacking brains to gain clues to your investigation.

This is where the horror begins, strap in! Each of these Dream Eater experiences is nothing short of trippy. It isn’t short on jump scares but your experiences here will leave you with the feeling of dread even after you unplug. To progress here you will be solving puzzles that have no obvious solution. Until you solve it and realise it has been staring you in the face all along. Also distracting when you have to do this to the sound of a crying baby. The imagery is wild and non-sensical. But when you couple this with a soundtrack, sound effects, and ambiance, it can truly have a disorienting effect.

The only monsters here are the ones that plagued the victim’s mind. You aren’t being chased, there is no combat, there is just you and their inner demons. There are a small number of stealth sequences that interrupt the flow of the game a little bit. I would recommend you play with a headset on, not only for the full effect of the horror, but escaping these monsters will rely on the sound of their footsteps, and, if you get caught, it’s instant death.

It’s also worth being mindful of the things you say and do in the real world, because as in life, actions have consequences, and as such, the game has multiple endings.

I played Observer: System Redux on the PlayStation 5 and experienced no gameplay bugs at all. Slow but solid gameplay will keep you on the edge of your seat.

This is where Observer: System Redux really shines. Bloober has managed to take psychological horror out of its traditional setting of abandoned mansions, asylums, and the like, and set it in a dark dystopian future with cyberpunk elements. The graphics are great and really bring the unsettling imagery to life conjuring up all kinds of interpretations and metaphors. I did find the game to be a little too dark at times, even when I turned the in-game brightness up. To compare this to the original, it is night and day as you can see below.

Sound effects have been managed really well to immerse you in the atmosphere dripping with dread and the jump scares do get to you. Rutger Hauer’s performance was phenomenal as expected. For music and ambiance, Arkadiusz Reikowski has been brought in, drawing influence from Ghost in the Shell and Akira. Working alongside Polish band Księżyc for vocal work to make a haunting and subdued soundtrack with some psytrance-like vibes.

The main campaign will take you about 10 hours, but if you pick up the side investigations you can squeeze a few more hours out of it. It is definitely worth replaying for the various endings and the number of easter eggs you will come across. In my playthrough, I came across a couple of posters for Layers of Fear and The Medium in some poor soul’s apartment. Of course, there are the various emails and secrets that will flesh out the backstory of the Nanophage and The Great Decimation.

Setting a psychological horror in a time over 60 years in the future away from its traditional setting is a fantastic idea and was well executed. It also goes to show that horror extends beyond monsters, zombies, and ghosts. Sometimes it’s the horror of the mind that you should be more afraid of. I can only equate this to what a paranoid schizophrenic might encounter in their own heads. It’s disturbing.

Hauer’s performance was exceptional, and it’s a graphical and audio treat. The stealth sections do slow the pace a little but these instances were few and far between. This is by far one of the most intense and mentally confusing horror-thriller types I have played in a while. The world that has been conjured up by the developers feels real and very believable, which makes it all the more unsettling. If you are looking for something a little different to whet your horror palette, then look no further than Observer: System Redux. As such, I award the coveted Thumb Culture Platinum Award.