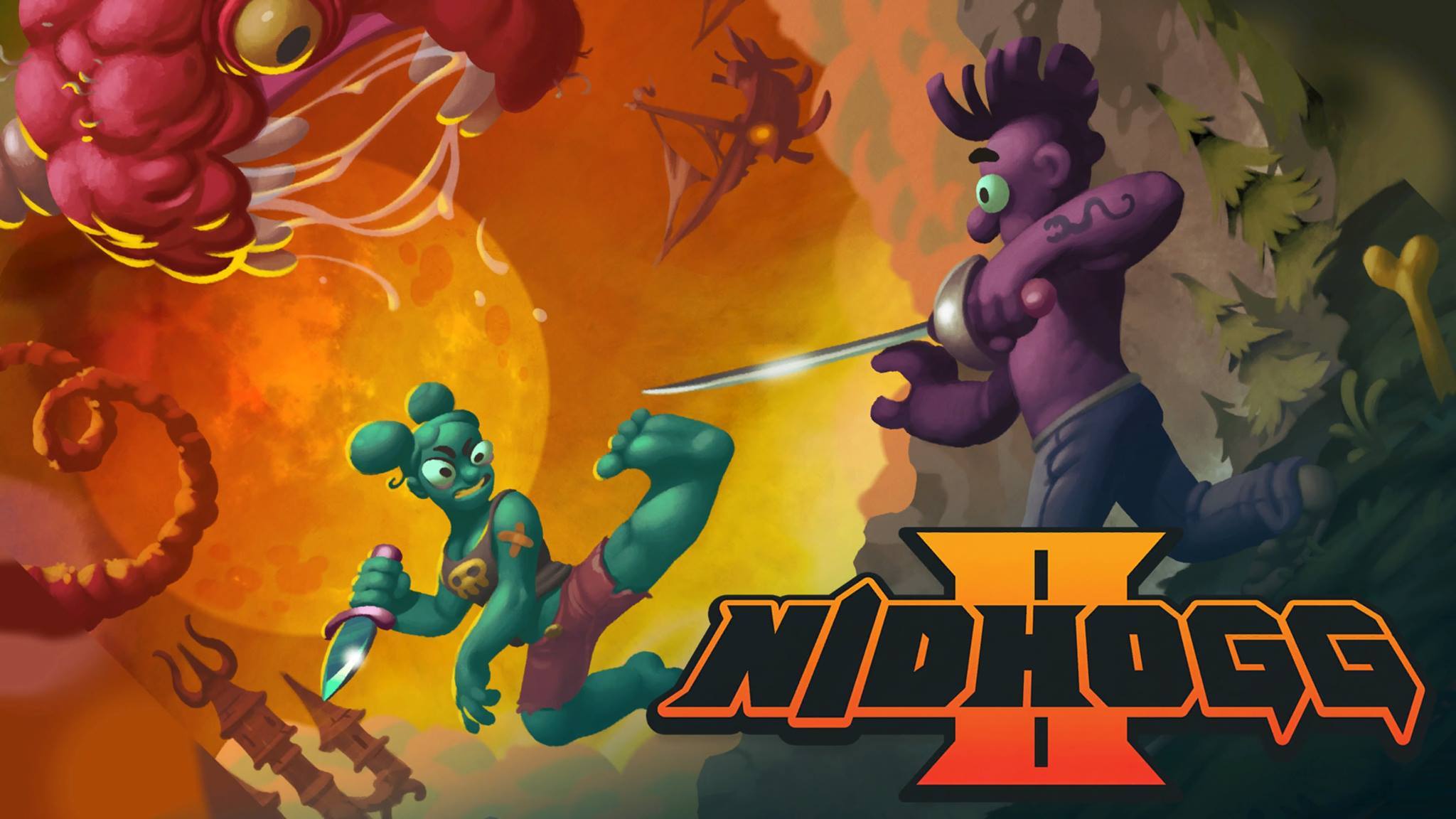 Nidhogg 2 is a quirky hacking, slashing, stabbing fencing game. Which is now 16bit instead of 8bit like the original. It’s a hard game to describe but I’ll do my very best.

Nidhogg 2 gameplay is split into three different modes. You have Arcade Mode, which is yourself versus the computer. There is Local Multiplayer which is a good old-fashioned on the couch war with your friends. This can be the classic one on one, or you can set up a tournament for three to eight players. Finally, there is Online Multiplayer where you can play ranked matches or unranked matches. Again, these are one on one battles.

Nidhogg 2 plays like a game of tug of war. There are seven screens and you both begin on the middle screen. You then kill your opponent anyway possible, you can use your feet and kick them to the ground before stamping all over them. You can use a Fencing Sword and run your opponent through with high, mid or low attacks. There is a Broad Sword with high or low slashing attacks. If you prefer there is a Bow and Arrow to be used also for ranged attacks, although personally I hated this weapon with a passion. You can get up-close and personal with the dagger which can always be fun…. But if all else fails just throw your weapon at them and hope for the best.

When you reach the final screen, you get declared the winner before getting eaten by a big mutated worm, this worm with bad dentures is called Nidhogg. This is the part of the game I don’t seem to fully appreciate, you fight to the end to win the battle to get eaten? I am struggling to see the point, surely the loser should get eaten?

The Local Multiplayer is more rewarding. This is down to the simple fact of watching your opponent squeal and mutter under their breath as you impale them over and over.

As I said earlier, Nidhogg 2 has been done in a 16bit graphic style. It feels like you have been time warped back to the 90’s. The game would be suited on your dusty old Mega Drive, or Super Nintendo. There are a lot of bright vivid colours, lots of colourful blood and gore. But it’s done in a family friendly manner. Some of the screens do have rainbow strobing effects, so be warned on your PlayStation 4 Pro!! You will need sunglasses for these levels, or risk a headache.

Nidhogg 2 sound effects are minimalistic, squelching etc. The music is much better though. I found myself getting quite into some of the 16bit tuneage here. This was one of my favourite parts of the game.

I know there are a lot of Nidhogg One fans out there. There’s a lot of love for indie games. This however for me is not one of those games. I found the games over simplistic controls awkward to use when trying to adjust your attack height while moving. I found many a time you would be forced to kill yourself. Or you could stand there doing nothing hoping the computer would do something other than pacing forward and backwards.

I think the people who will enjoy this game most will be speed runners. Mainly because the Arcade Mode can be finished in under twenty minutes, there is even a trophy for this. You might play this for a short while with your friends in Local Multiplayer, but I’m talking hours rather than weeks.

When I was given this game to review I had never heard of Nidhogg 2, having played it I’m now glad I never played Nidhogg or I would have cried myself to sleep the night before I first played this game. I wanted to like this game due to the following the first game had, but personally, for me this is one game I would rather forget. Nidhogg 2 receives the Thumb Culture Bronze Award.