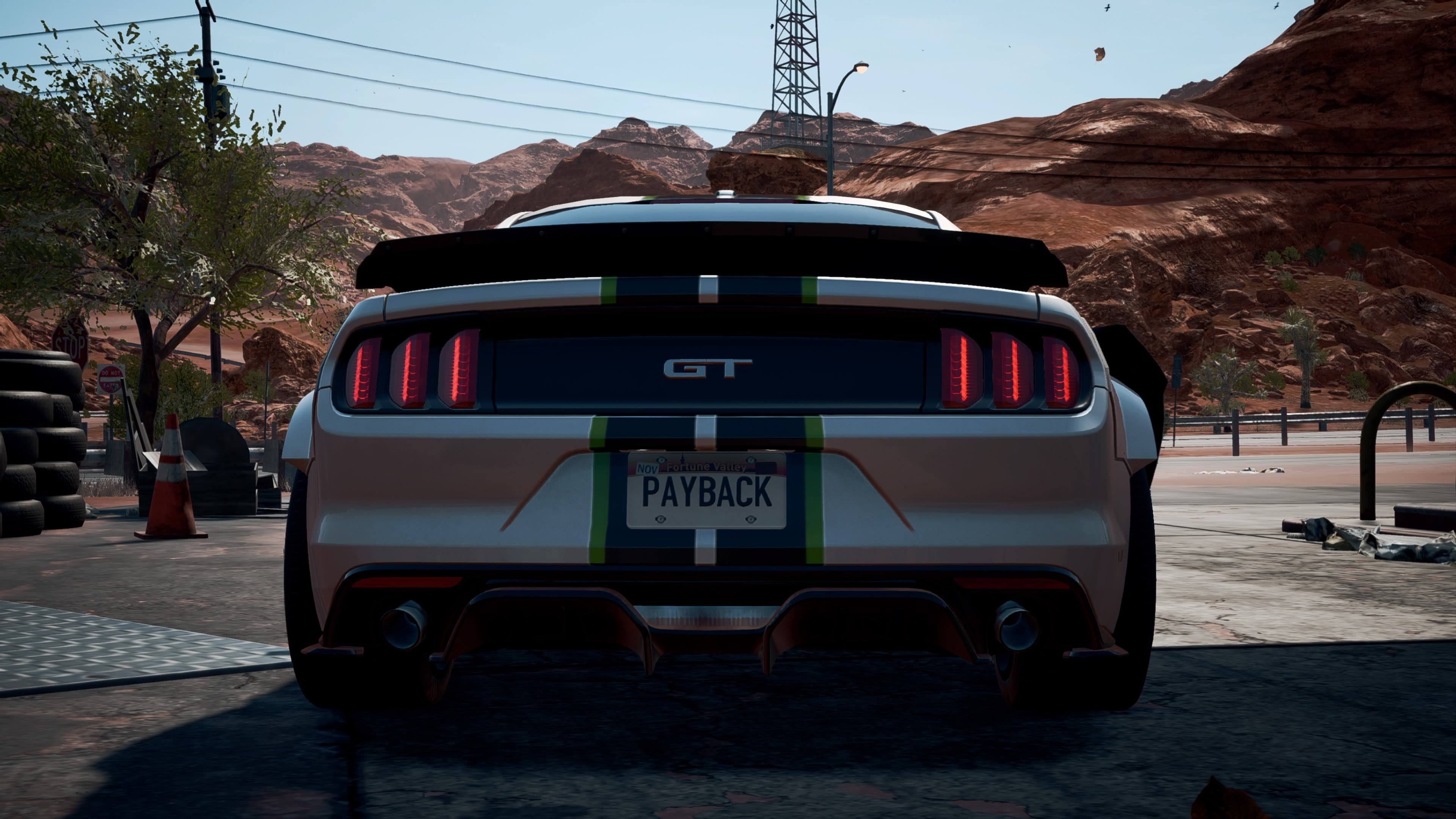 Need For Speed Payback developed by Ghost Games and published by EA supposedly brings high-octane stunts, devastating car battles and jaw dropping set piece moments. As well as build upon the iconic customisation that the Need For Speed franchise is famous for.

So, how does the latest game with the Need For Speed title fare? Does it live up to the hype like a Supercar? or does it suffer from turbo lag and struggle to get going?

With Need For Speed Payback you are given the standard revenge trope, person gets betrayed, person builds up a reputation to take down the betrayer.

Set in the bright and varied city of Fortune Valley you take control of a number of racers; Tyler “Ty” Morgan the natural-born Racer, Jessica “Jess” Miller the Wheelman always on the run and Sean “Mac” McAlister the Showman, with a style as unpredictable and flashy as he is. Each racer takes part in their own speciality race type, race, offroad, drift, drag and runner. Each race type has its own car class, and being able to convert whatever car to any of the car classes Need For Speed Payback gives you the freedom to edit your car any way that you want to.

The racing itself is a bit of a mixed bag. On the one hand its brilliantly responsive, with the twitchy controls allowing you to change direction and weave through traffic with ease. Then it sometimes feels unresponsive, especially when you are sent into a brief cutscene. For example, during one particular runner race, I took down a police car, was treated to the lovely crash cam, then when it returned my car was up against a wall. The game seems to leave you in control of the car whilst your view is showing elsewhere.

So the crash cam, it makes its return in Need For Speed Payback, and whilst it is a treat to see, its nothing like the crash cam that people will know and love from the Burnout games. The cars on show sometimes flip and spin shedding sparks and now and again body parts. Then on the other hand the cars just kind of slow down. Its all a bit of a give with one hand and take with the other scenario. You can switch them off in the settings though if you just want to concentrate on your driving.

So lets move back to Fortune City, what is there to do with your time driving around the largest open world in Need For Speed history? With four distinct areas, ranging from the Desert area to a glitzy city called Silver Rock. In each of these locations there are a number of activities to carry out, from activities such as Speed Run, Big Air and Drift Zone, to speeding through Speed Cameras at a target speed. Then exploring the open world gives you casino chips to discover as well as billboards to destroy. The open world on Need For Speed Payback has given you a large amount of offroad area to drive through as well, opening up even more area for you to find big jumps and pull off killer drifts.

Once item that you will find around the map are the derelicts. These are classic and iconic cars from the past that you can build up from parts found in locations around the map. To find these you are given a series of clues, one first to find the main chassis of the car, generally on low level. Then to find the four parts of the derelict you then have to follow more clues, although these ones are a bit harder to find. Covering a larger area of the map, and then you usually have to find a route, taking in a jump to get to the part. Once you have found all the parts you then head back to your garage where you can decide which class you are going to take your restored vehicle down.

The car list itself is generous, covering some classic vehicles from the VW Golf GTI all the way to some pretty incredible supercars. You will be hard pressed to find a car that you can make your own. Yes, the game doesn’t have the car list of games like GT Sport, but who cares. You cant fit a bodykit to those.

Upgrading your car is done using a method where when you finish a race you get to pick from three Speed Cards, this new addition allows you to try out different load outs. Interchanging parts at ease to ensure that you are using the best Speed Card in each of the six car parts available. Each Speed Card has a manufacturer, and matching either three or six of these manufacturer then gives you an additional bonus. So there is always a different set of customisation available however you race. If you need a Speed Card in a hurry and don’t want to take part in another race then you can head to a Tune Up shop and just purchase a Speed Card with your earned credits in game.

There is so much road to race around and activities to take part in that you could easily lose many hours just driving around the twisty roads of the mountains, trying to nail that killer drift.

Once again we have a bit of a mixed bag, the comparison has to be made with the previous Need For Speed game, where we were given shiny textures and glossy finishes in the dark and quite often rainy environment. This game with its day to night cycle gives a bit more of a ‘normal’ colour pallet.

Both the in game and also the HUD graphics can take a few seconds to load the first time you enter the game, once they are loaded you are greeted with some decent textures and car models. With no internal camera you are left to wonder if Need For Speed Payback has rendered the insides accurately.

Cut scenes are hit and miss, with the first few frames are often jittery with some instances of the driver having an out of car body moment. Then we have the issue that I found most annoying, when you start a race against another driver you get a few lines of dialogue, however in the car the characters are staring straight forward, no lip movements or anything like that. For all the effort that has gone into making the game look as it does, this seems a bit of a slip by EA (not another one!) With the rough comes the smooth though and in general the graphics are decent enough for you to play around with.

A photo mode is added as well as a quick snapshot button, the photo mode allows you to come up with some fantastic looking images, if you find the right spot and are clued up enough to play around with the different settings.

Wooden characters, decent soundtrack, car sounds. These are the main elements that you will encounter on your audible journey through Need For Speed Payback. While the car sounds are accurate, and each vroom vroom of your revving engine is nicely tuned to give the most sound possible, you do feel a little underwhelmed when you hit that nitrous button. You expect a large BOOM and hear the engine revving uncontrollably towards its top end. You kind of just feel a little…meh. I mean don’t get me wrong its decent, it could just have been better.

The vocal talents on show are passable, although as mentioned the characters can be a little wooden. This does mean that you are unable to feel a connection with them as they go through trying to take The House down.

The majority of your time in Fortune City will be spent free-roaming, taking in the sights and hitting those activities hard. Nipping into a Tune Up shop to purchase upgrades and every so often returning to your base HQ, the garage, to customise your car. Spending time editing those decals to make them just right.

The game is enough to keep you entertained for a good couple of weeks of on and off gameplay, however past this, unless you are a die hard Need For Speed fan, there are other options out there when it comes to racing games that just do things better.

Overall, this game has a few new elements to it, which actually help and give the game a bit more of appeal than the previous Need For Speed game. However, this can feel short lived. Dipping in and out for an hour at a time will probably be how you will enjoy Need For Speed Payback at its best.

Disclaimer: We received a physical copy of this to carry out the review