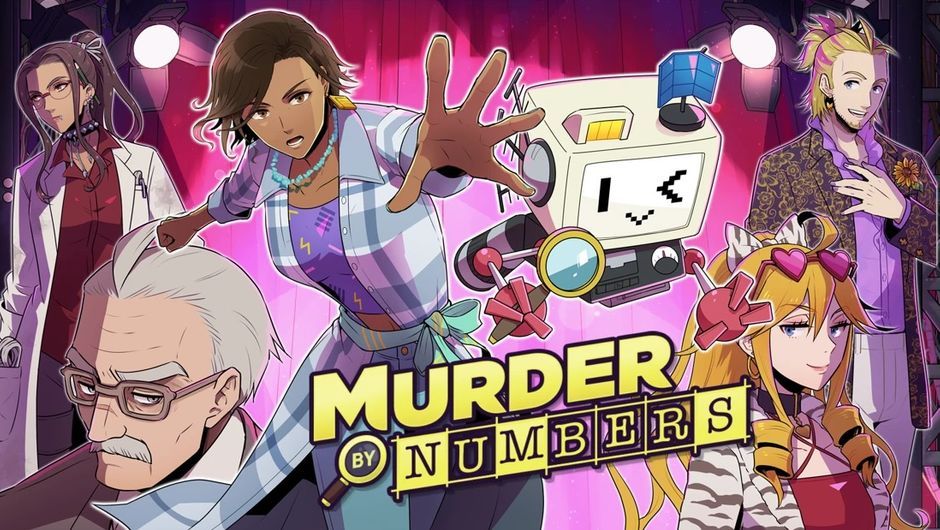 Remember the 90’s? Flannel shirts, MTV, Furby, Tamagotchi’s, bowl Cuts, neon patterns, amazing cartoons, and the idea that all robots are sentient. Murder By Numbers dives headfirst into all the nostalgia possible, and in classic 90’s fashion, sends you and your robot buddy to hunt down bad guys.

Only, instead of muscle-bound action heroes, these criminals will face the wrath of cognitive thinking. Developed by Mediatonic games, Murder By Numbers is available now on Nintendo Switch and PC.

Murder By Numbers is at its heart a series of logic puzzles (commonly known a Picross or Nanogram puzzle) wrapped in a visual novel.

Set in the ’90s, you follow Honor Mizhari, an actor who finds herself in a somewhat forced career change. She used to be a hit TV detective but now finds herself having to be a real detective after her boss is murdered. Fortunately, she has SCOUT, a robotic companion who’s trying to solve his own problems – he’s lost most of his memory.

The moment to moment gameplay loop is as follows: go to an area, speak to the people there, look around for clues, solve a Picross puzzle, speak to people again. It’s a simple loop, and whilst it does get repetitive, it’s held together by brilliantly written characters and dialogue.

For anyone not aware of what Picross puzzle is, I’ll try to explain. You have a grid of varying sizes, and along the rows and columns, there’s a series of numbers. These tell you which of the squares need to be coloured in. By doing so, you’ll create a picture, or in this case, a clue.

I’ve loved Picross games for a long time, and this does a nice job of getting the brain working. However, I didn’t find any of the puzzles particularly difficult. And whilst the murder mystery is an interesting way to frame the puzzles, I just wished Mediatonic took things a little further

There are points in which you need to present the right piece of evidence to the right person to progress. But there’s no punishment for getting things wrong. Even when you’re choosing whodunit and pick the wrong option, Honor explains the theory, but then goes ‘Nah, that can’t be right’.  It is a shame as it eliminates all the tension when figuring out what happened, and makes the investigation side just a task clicking everything.

If you’ve never played a visual novel before, the name does describe its presentation well. It’s a slightly animated comic book. Backgrounds are static, with characters placed on each scene. Reactions are the only animations you’ll find, and are nice and exaggerated to match the light-hearted tone of the story.

It might be a ‘simpler’ visual style, but what’s here is beautiful. Aesthetically, it nails the tone and era of the story. Character designs are memorable, and locations wonderfully varied. Your investigations will take you from Hollywood Award Shows, to drag clubs, laboratories, and boat parties.

I can’t fault the presentation that’s on offer in Murder By Numbers. It goes for a particular style and hits the mark. Whilst it doesn’t do anything new for the genre, and it’s not the best in class, it sells the world perfectly and is enjoyable throughout.

One selling point of Murder By Numbers is the fact its soundtrack comes from Masakazu Sugimori, best known for their work on the legendary Viewtiful Joe, and Phoenix Wright: Ace Attorney. It’s an impressive resume, and although Murder By Numbers certainly has a great soundtrack, it won’t stand up as one of Sugimori’s best.

The music is upbeat and catchy. You’ll hear plenty of repetition throughout the game, but it never reaches the point annoyance. However, my biggest disappointment was that often I felt the music didn’t match what was going on with the story.

You may be in a dramatic moment scanning over a body for clues, but as soon as you enter a puzzle, it changes to light and cheery tune. I would’ve much preferred it keeps the drama throughout. The stark contrast is off-putting at points.

Murder By Numbers features 4 cases, each varying in length. I’m not sure of the exact number, but you’ll easily be working your way through 100+ puzzles. You’ll also be ranked on each case. Higher rankings unlockable optional puzzles, which in turn leads to additional memories for SCOUT.

Overall, I spent nearly 20 hours completing most things. If you’ve never touched a Picross game before, you can expect this number to be longer whilst you get your head around things. Regardless, there is certainly a lot of bang for your buck. It’s disappointing that there’s only ever one ending to a case, and fail states, as ultimately it does mean once your finished, it’s unlikely you’ll revisit the game.

Murder By Numbers makes a great attempt at blending two genres in a way we haven’t seen before. Just, unfortunately, it does neither as well as it could.

I wish the story was more involved, and there was a more surprise to the outcomes. There are no red herrings, and outside of the puzzles, you can’t go wrong. With regards to the puzzles themselves, there are more challenging versions out there. There are instances in the game when you’ll be hacking into things by completing a series of timed mini Picross puzzles. It’s a really clever way of blending the narrative and gameplay, and I would love to see this idea expanded on.

But make no mistake, whilst there’s room for improvement, what is here is fantastic. The story is a light-hearted, enjoyable romp, with interesting and well-written characters. Every scene put a smile on my face, and the puzzles did get the old noggin working.

I’ve done some hard investigation, and all the evidence points to Murder By Numbers being awarded a Thumb Culture Silver Award.