MotoGP™21 is finally here, and man, what a blast you will have! Brought to us from the renowned Milestone, who develop and publish this game. Milestone has brought us some fantastic games. These include games from MotoGP™, WRC, MXGP, and more including RIDE. So with such a large roster of racing games, Milestone certainly knows how to handle speed.

I got the chance to play MotoGP™21 on the PlayStation 5, and it was incredible. Check out my previous review here. Let us know in the comments if you’re going to play this game. Now it’s time for us to delve right into the gameplay, can Milestone win pole position with MotoGP™21? Let’s find out!

Upon launching the game, I was greeted with a few choices to start my journey in MotoGP™21. Of course, I headed straight for the career mode. I chose to start at the lower championship level and went for Moto3. I strongly advise you do the same if you’re a newcomer, or, someone who hasn’t played the MotoGP™ games a great deal. “Why?” you may ask. Because this game is fast. The high-end MotoGP bikes are literally super fast and can be frustrating at first so it’s worth checking out the Moto3 championship.

Even then, I struggled at first even with Moto3. As you can see below I was in 22nd on the grid. However, look how beautiful the game looks! We’ll get into that in more detail further down.

We have a selection of game modes to play on MotoGP™21. First up we have “Quick Modes”, these are essentially where you go for a quick blast around a track, or to practice said tracks. There are 3 modes in here, New Grand Prix, Time Trial, and New Championship.

New Grand Prix is effectively a single race, you can choose which track, riding aids, the weather, who you ride as, as well as other options such as the difficulty and how long your race will be.

We then have Time Trial, this mode is essentially a practice mode where you can go around a track for as long as you like, perfecting each corner whilst trying to get that fastest lap. In Time Trial mode we also have leaderboards, which when the services come online when the game is officially released, will allow you to track your friends’ (and others online, of course) fastest laps and race times.

Last up we have New Championship. This will allow you to race a custom championship in a selected tier of racing such as Moto2. Again as per New Grand Prix, we have race options, who we ride as, riding aids, and also a calendar where you can customise the tracks you will race on and when they occur in the calendar.

With the exception of Time Trial, each race mode also has the opportunity to take part in the free practice rounds 1 and 2, as well as qualifying rounds 1 and 2. That’s if you get one of the faster times and go through to Q2. We can also have a warm-up lap before the main race.

So you may have noticed I have mentioned riding aids above. What are these? Riding aids are how your bike will handle whilst racing. We have many choices to tweak the riding difficulty here to exactly as we would like. Here we can tweak the brake system, gearbox, electronics, steering, and tyres. Speaking of tyres, you can also manually select which tyres you want for each race. We have the choice of soft, medium, and hard. If you’re not too sure you can use a recommended setup.

Also, be careful of fuel consumption. If you have your engine set to a higher power whilst racing (changed with the D-PAD), your bike can and will use more fuel as you hammer it around the track.

One thing I noticed fairly quickly whilst racing is how this game takes advantage of the adaptive triggers on the PlayStation 5 DualSense controller. You literally feel every gear change thanks to this and the haptic feedback. It truly is incredible. Milestone has definitely used the triggers to their absolute best and I feel these work very well with a motorbike racing game. I also noticed that when you come off of your bike, the adaptive triggers seem to release and come free, making you feel like you’ve lost control. It’s amazing.

Riding the bikes feels really good on the controller, controls are simple enough and nothing too complicated as expected with a racing game. When you finally win a race you feel a real sense of accomplishment. Wet races are the ones to watch out for, they can be pretty tough. One thing I did love was the dynamic weather, I saw the sun break through the clouds during my race which resulted in the track drying up. I also thought the spray hitting the screen felt very immersive, really gives you that extra feel of the speed in the game.

In career mode as mentioned above, I chose the Moto3 championship which sees you riding 250CC bikes to start you off. You can research developments for your bike as your career progresses, allowing you to unlock upgrades such as your bike being a bit more economical on the fuel, or wearing your tires down slower than before. I really like this as it adds to the career. I loved racing during the qualifying round 1 and 2 (if I qualified for round 2 of course), you can really throw the bike around to try and get that fastest lap to get closer to that pole position, or, sitting pretty in said position. You can also tweak your engine to your perfection. Get that gear ratio bang on,

All in all, this game is absolutely top class.

MotoGP™21 uses Unreal Engine 4 and man, you can see that. The graphics are amazing and I can not fault them at all. MotoGP™21 doesn’t miss a beat on the PlayStation 5. One thing I did notice was that when racing on a wet track, the water that flicks up seemed to flash/flicker on the screen, looking even worse when you used the rearview camera. However, this appears to have either been a slight bug or a one-off thing as I did have a game update and since then I’ve not noticed it. One of my favourite things about MotoGP™21 is how brilliant the photo mode is. Check the below and look how gorgeous it is using the action shot.

Audio in MotoGP™21 is also incredible. I tried the game with the PS5 3d Pulse headset and also with a set of 2.1 Logitech speakers. As per the graphics I can not fault the game’s audio. The sound of all the bikes revving to shoot off of that grid as the lights count down sounds amazing. I simply can not fault it.

The game has lots to do, unfortunately, I was unable to try out multiplayer as the Milestone services were not online. However, that did not take away from the game for me. As mentioned above there are loads of modes to keep you busy on single-player. I can see this game lasting players many hours.

MotoGP™21 ticked all the right boxes for me, it has most definitely built on previous games in a good way. As mentioned it looks and sounds incredible on the PlayStation 5. MotoGP™21 gets a platinum award from me. Well deserved, thank you Milestone for such an incredible game. 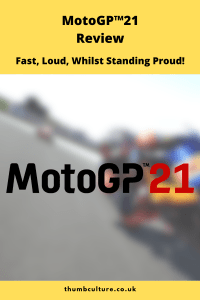