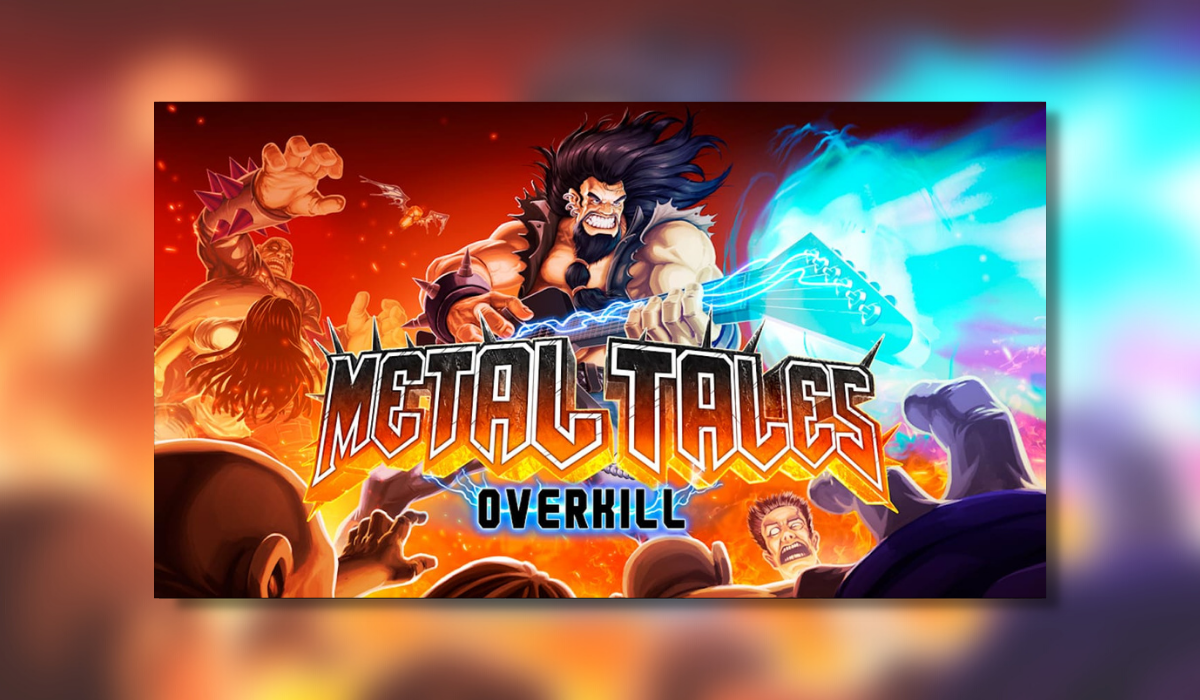 Metal and video games are two of my foremost passions in life. So on the rare occasion that they do come together, I always jump at the chance to give it a go. It is a shame that this seldom happens as a lot of gamers, like myself are metalheads. My earliest recollection of metal-style riffage in games is the tune that is E1M1 – At Doom’s Gate, from the 1993 classic DOOM! A style that is still consistent with the franchise today. More recent fantastic entries include Guitar Hero: Metallica and Brutal Legend. Well, I say recent, that was over 10 years ago. So, does Metal Tales: Overkill fill that metal/gaming void?

Metal Tales: Overkill is a roguelike twin-stick shooter developed and published by Zerouno Games. The game is out now digitally on all current generation and previous generation consoles, as well as Steam. If you are of the physical media persuasion, then there is a very metal Collector’s Edition on Switch.

I played Metal tales: Overkill on the PlayStation 5. So, grab your axe, we got a show to play.

Before we get into the game, we are treated to a comic book-style intro written in English, yet narrated in a language I couldn’t make out. Basically, all the guitar gods have been possessed, thus possessing metalheads everywhere. All metalheads except you of course. With your trusty axe/guitar in hand, you must melt the faces of legions of zombie metalheads and free them from this curse. Sadly no faces actually melted, they just sort of exploded into purple goo. Shame though, melting faces would have been a lot better in keeping with the metal theme.

Sadly that that’s really where the story starts and finishes. The game is true to the roguelike genre, levels are procedurally generated in a grid style and perma-death looms ever present. Perma-death is one thing, but you would think that you would restart the game with some passive abilities from your last run. Well, no, that does not happen. It’s back to square one, literally.

When you are on a run there are various power-ups in the guise of new guitars, different strings and other stuff. These can be slightly wider or faster shots with your guitar etc, but overall the effect is quite minimal. As you go from room to room murdering fellow zombified metalheads, you will notice other rooms such as the store or trap rooms. The store gives you no clue how to spend your currency and the trap rooms do little to break up the monotony of the rinse and repeat gameplay and wearisome level assets.

When you do come to a boss, they at least provide some sort of challenge. This is where you will likely die the most. At least when fighting the bosses, the music amps it up to 11. If you die, start again. You are given a score screen which has an upgrades tab which was always empty. No idea how to acquire any type of upgrade or what they might be. If you beat the boss, of which there are only 8, you move to the next stage. Now you can use one of your summons, which was very underwhelming.

As you dash from room to room there is no experience to be gained or leveling up to do. You might as well just go and find your power-up and get straight to the boss and get your death over with. Or, maybe just save yourself the hassle and turn the game off.

The graphical design of the levels are less than inspirational. It just seems bland and boring and each room in the bar looks the same, just with pinball machines and beer barels in different locations. I sort of expected this graphical prowess when games were coming out on the iPhone 3GS.

The music though, it’s only redeeming feature. It is straight up brutal at times, and I like that. Not only is the music really metal, but the bands are great too as I noticed a few from Eclipse Records on there. Its just a shame that the game is not as frantic and as angry as the music, because this could have been something good. As it is, I would rather listen to the playlist while doing the housework.

Here is the real challenge. I challenge you to play more than an hour in one sitting before you get bored. There is so little in terms of incentive or reward to make you want to play any longer. I hate talking bad about games, I really do because it is like telling someone that their art is rubbish. There was so much opportunity here for this to be a good thing, but sadly I feel that opportunity has been wasted.

Sorry, but Metal Tales: Overkill falls way short of its very badass title. There just isn’t a lot of fun to be had here. Seeing the same rooms over and over with no progression is not an enjoyable experience. The only saving grace is the soundtrack, but even that, there was not enough of it. Some more songs would have been nice. The game functions as if a teenager had made his first roguelike game and missed a lot of features out. The game isn’t broken by any means, but the only reason it is getting the Thumb Culture Bronze Award, is for the soundtrack.