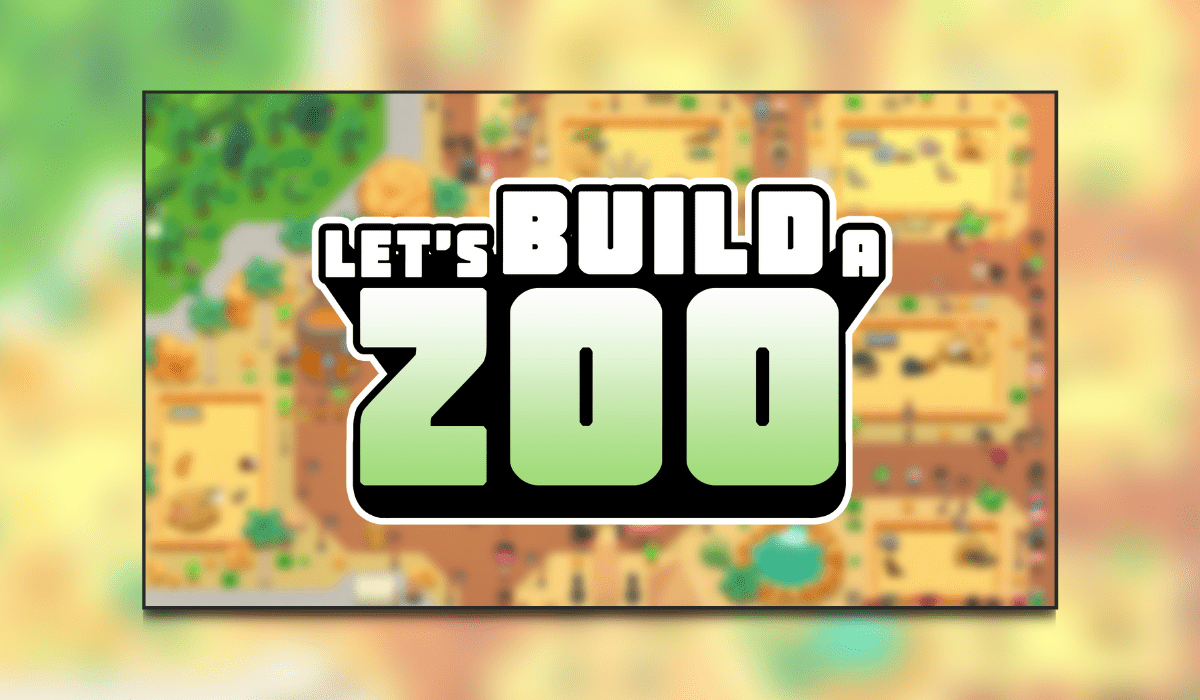 Welcome to my review of Let’s Build a Zoo on the PC. Brought to us by developers Springloaded and publishers No More Robots (Heist Sim, Not Tonight), Let’s Build a Zoo lets you build and manage your own zoo, with a twist. Splice genomes from different animals to create animals from your wildest dreams.

Build Your Own Zoo With A Twist!

With the success of previous Zoo-based management games from other developers and publishers, can this game follow hot in their trail? Check out my previous review here where I played the chaotic beat ’em up Okinawa Rush on the Nintendo Switch.

Let’s Build a Zoo, at first, seems like all the other tycoon/management style games. We open our zoo, we go through a simple tutorial on how to run things, we buy a food stand, then build our first enclosure. However, it’s not that long into the game and it starts to stand out as its own. Building enclosures feels rather unique, you choose your enclosure style, during the early game we have the choice of grass, desert, or concrete. Later in the game, we can research more enclosure types, such as the savannah enclosure.

We can also add items to the enclosures, like decorative items such as trees, rocks, or bushes. Each enclosure also needs a source of water for the animals to drink from. This requires the drinking bowl to be within a certain radius of a water pump. The enclosures can also have enrichment items in them to keep the animals entertained, such as small or large balls, scent markers, and trampolines. We can also assign zookeepers to different enclosures or leave them assigned to all. As your zoo gets bigger you are going to want to assign zookeepers to different enclosures to ensure your animals get enough attention.

Speaking of animals, of course, the enclosures will contain animals once you get some. To start with we are gifted a couple of rabbits to get our zoo going. Soon enough in Let’s Build a Zoo we can trade animals with other zoos around the world, as above. Different countries will allow us to get different animals from around the world. There is also a local animal shelter that allows us to rescue different animals, at a small cost.

Another way of getting animals is frowned upon in the animal keeper world. We have someone visit our zoo who offers us animals from the black market. Typically these are the more rare creatures of the world, or, some animals that have had their genomes spliced with another animal. You can choose to not purchase animals from this, if you do, your zoo may be rated down and this could affect how many people visit your zoo. So choose wisely as it isn’t always the best route to take.

Another way of getting different types of animals is by breeding them, this can result in you unlocking a new type of that animal as you can see in my above screenshot. My two white rabbits had a baby rabbit which is brown in colour. This can then lead to you having a tabby-looking rabbit, a black rabbit, and more. This is the same for other animals too. Now for the not-so-common feature in a management game, The Crispr. What is the Crispr? This machine lets you clone animals as well as allows you to pair animals with each other using genome splicing.

Basically, you could take a snake and a rabbit, and breed something really random. Like a snabbit, or a rake. Who knows! There’s a total of over 500 different animals in Let’s Build a Zoo as well as over 300,000 different animal possibilities with splicing.

Let’s Build a Zoo also contains a research tree that is unlocked once you build the research hub. As each day goes by you will unlock research points which then allows you to unlock items from the research tree, in any order you please. You can unlock new buildings in the research hub, there’s a huge variety to unlock, be it food, drinks, energy, or less friendly options such as a processor that you can send animals to for their eternal doom, and to become a part of your next favourite meal.

The appearance of our zoo can be changed too, we can change the paving in the zoo as well as place decorative items around. We can also change the entrance to our zoo just to make it feel a bit more unique to you. See the below slider for a couple of examples. These are only a couple of the many you can choose from. The game really is pretty darned open and the choices are yours to make. 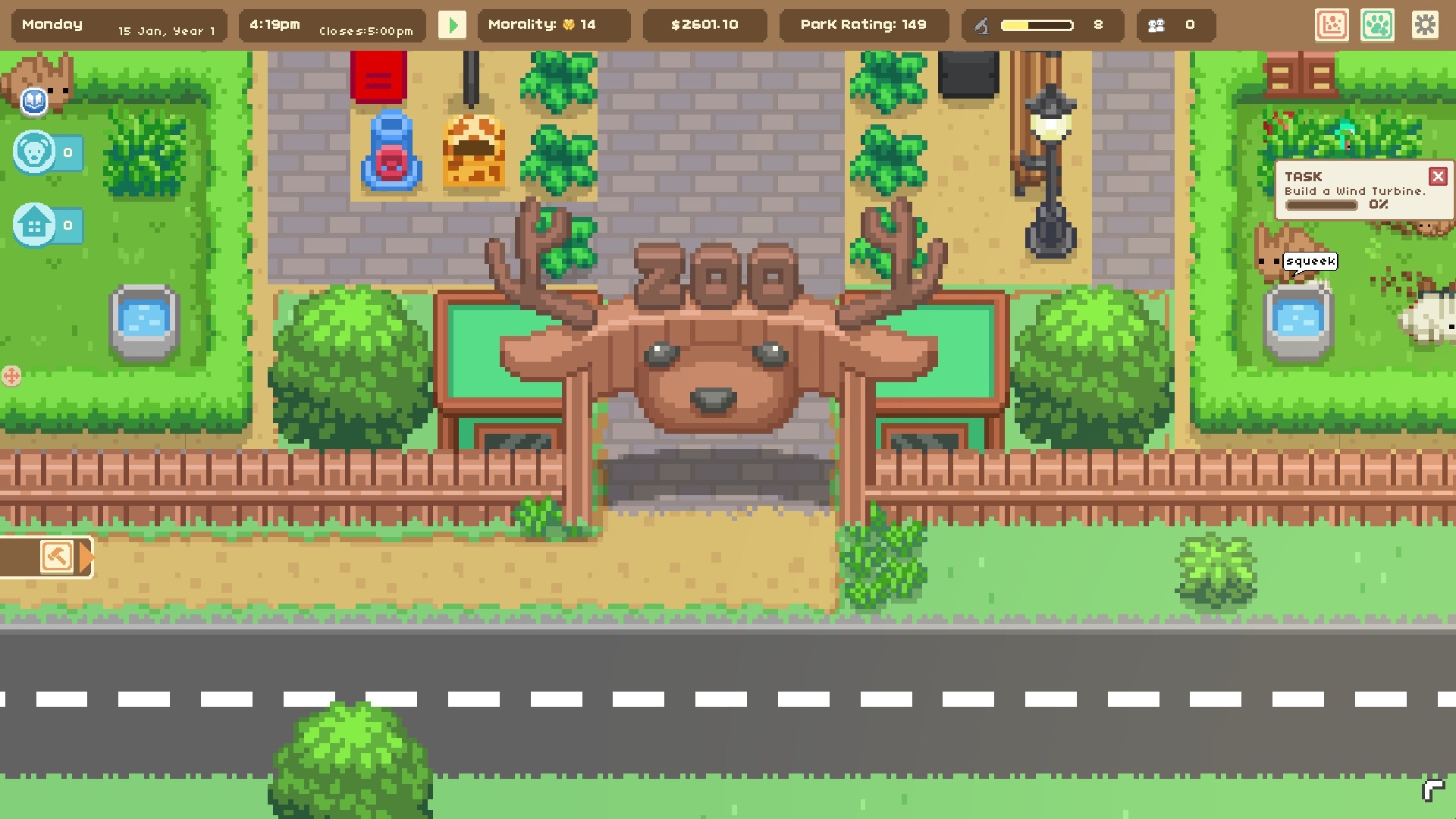 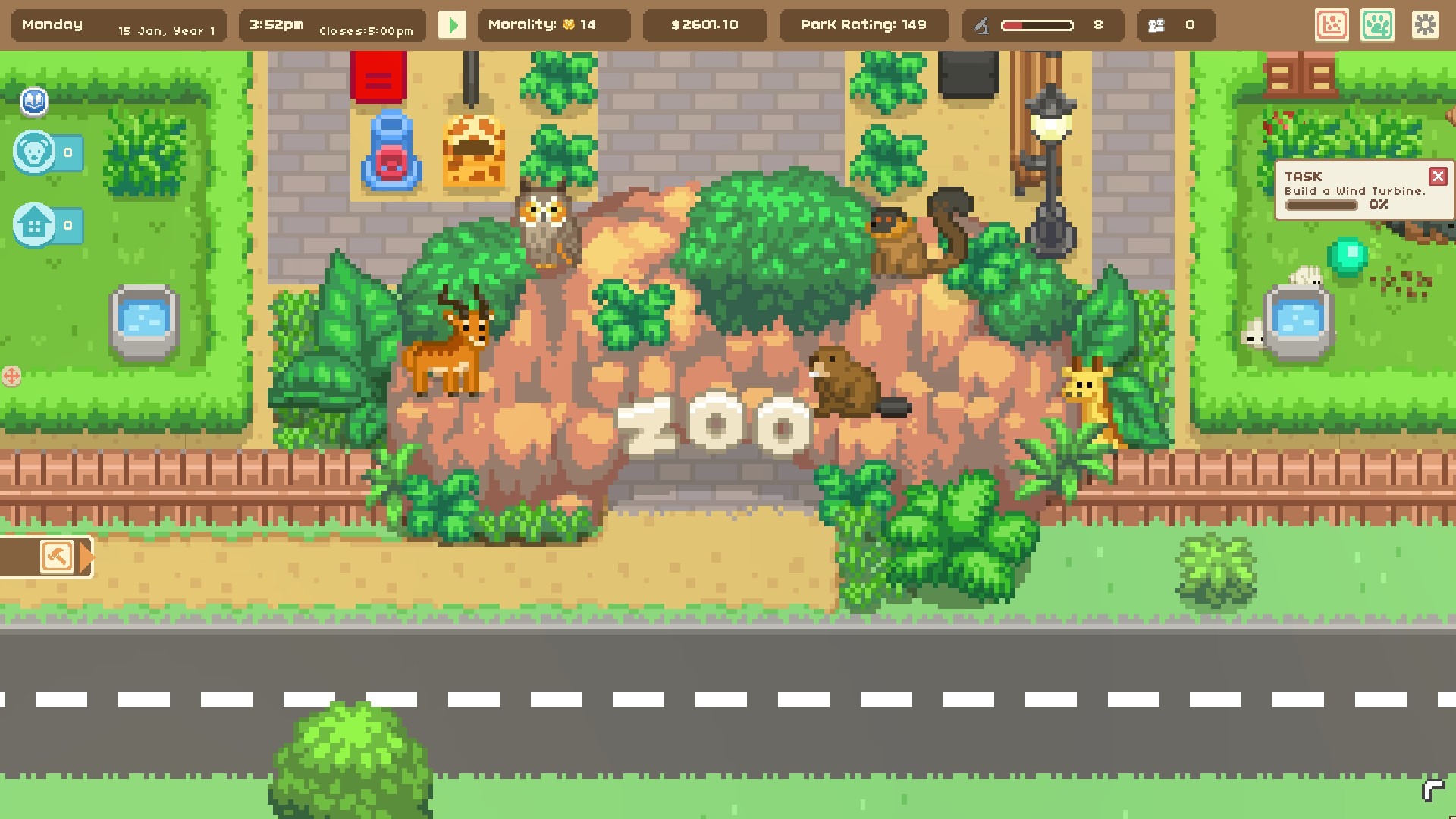 A couple of the zoo entrances you can choose from.

The game has a lot of potentials for you to create your dream zoo, just don’t forget to hire enough staff to cope with the demand that your crazy world of creations will put on them.

Graphics in Let’s Build a Zoo are rather simple, but as usual with the pixelated/retro-inspired graphic style, it looks good. The colours are nice and bright when needed, as you can see below.

The audio in Let’s Build a Zoo is fantastic. The soundtrack has a good amount of songs so they don’t feel like they’re getting repetitive. They all have quite a casual vibe to them to help you relax whilst managing your zoo. The sound effects in the game are also a pleasure to hear. The honking of geese, the oinking of pigs, it all sounds brilliant in my opinion.

Being a sandbox/management game, this game will last you as long as you like. There is a lot to do in the game, plus you can take your own chances with the genome splicing in the Crispr and see what wonderful creations you can come up with. There are also 33 Steam achievements for you to unlock, should you wish to unlock them.

Let’s Build a Zoo takes me back to the days of Zoo Tycoon, Rollercoaster Tycoon, and Theme Park. Of course, this game has its own stance in the “tycoon” world of games. It just gives me that nostalgic throwback to my younger days. It is a thoroughly enjoyable game that you can jump in and play as little, or as long as you like in one session. The genius idea of having good or bad actions reflect upon your zoo as well as cloning and genome splicing really make this stand out from games of a similar nature. I award Let’s Build a Zoo the Thumb Culture Platinum Award.