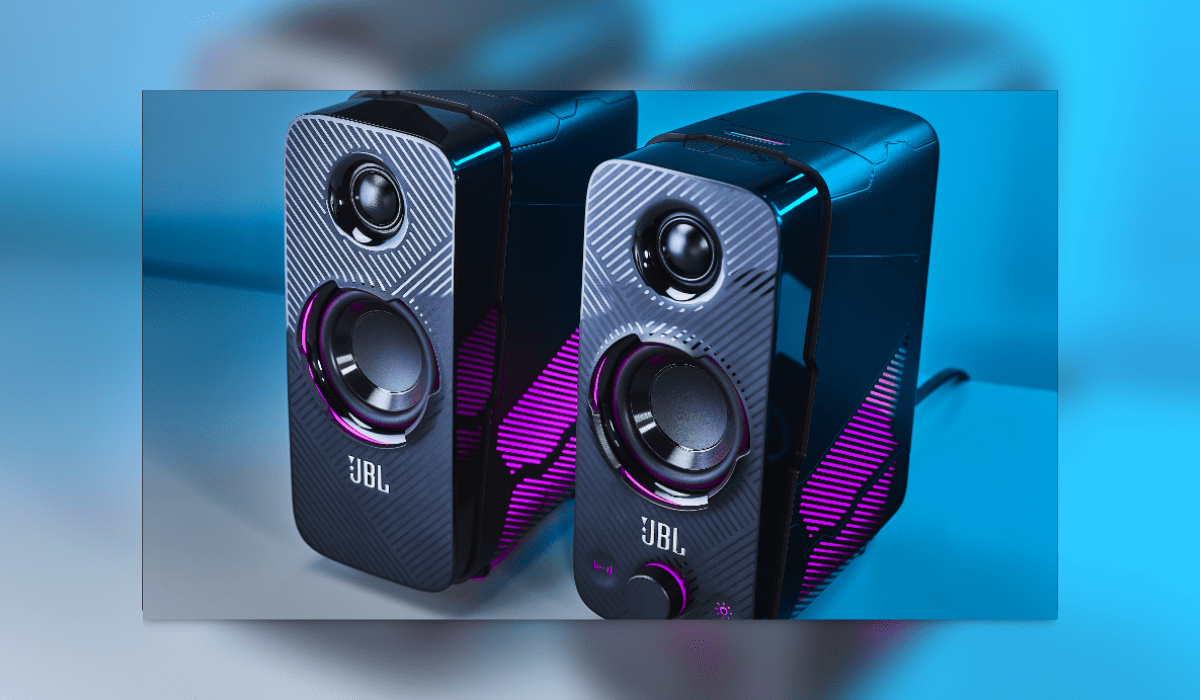 Landing on my desk today we have the vibrant JBL Quantum Duo PC Gaming speakers and boy am I excited!  With the Quantum range released in April 2020, would JBL be able to convince the gaming market that this is a must-have product to adorn your gaming setup?

Standing at 210mm high, 89mm wide and 176mm deep they are not the most imposing speakers in the world to have on your desk.   Finished in a mixture of matt and gloss black plastic you could easily be fooled into thinking that they are going to be light however once you pluck them from the vibrant orange box you will quickly realise that there is certainly some weight to be had at 1.4kg per speaker.

Featuring its own separate power supply along with a 1.5m USB cable and audio-in lead it does not take long to cable up and get going.  The quickstart card is there if you need a hand!  It is worth noting that the JBL Quantum Duo speakers can be used with all gaming peripherals thanks to the two included audio cables.  Bluetooth is also an onboard feature therefore you can easily send music to them without requiring any devices to be physically on and connected, perfect for those non-gaming moments.  Although predominantly using Dolby digital compression you can enable a virtual surround sound at the press of a button.  I was not that impressed with the virtual sound while gaming as it tended to just make the sound a little spacey and tinny, detracting from what you are doing.

As the speakers are powered up, the hidden RGB lighting comes to life illuminating the 2.5″ woofers along with the forward-facing buttons and volume dial as well as the sides of each of the speakers.  While I appreciate some people such as fellow Thumb Culturist Stu N love RGB and can’t get enough of it, thankfully the brightness can be altered and even switched off if required at the press of a button.

The lighting patterns can be altered on the JBL Quantum Duo speakers from the colours all the way to how they react to the audio that is playing.  Customisation aplenty!  Gimmick aside, they really do become a bit of a centrepiece if you like that kind of thing and I found them complimenting what would usually be the dark sides of the desk beautifully.

Bass In The Place

When it comes to sound, JBL has been in the speaker industry for decades with James Bullough Lansing having invented his own unique speaker drivers back in 1946.  With the Quantum Duo speakers, there is certainly no disappointment to be had with these 20W RMS little powerhouses.  Crystal clear sound pulsates via the woofer and tweeter from the colour changing speaker fronts while balanced punchy bass tones remind you that this is a well-engineered piece of kit.  With a frequency response starting at 60Hz, playing FPS games such as Cold War and driving sims like Forza through the JBL Quantum Duo’s really heightens the explosions and roar of the engine.  I jumped countless times while playing Call of Duty purely because the explosions in-between moments of quietness can make you jump out of your skin due to the clarity and power of it all!

So far through the testing, the speakers both sound good and look great however there was one issue that kept on flaring up for no real reason whatsoever.  Auto-shutdown.  When I first connected the JBL Quantum Duo speakers to my pc I plugged them into a USB hub.  Almost regularly I began suffering from the speakers turning themselves off after between 10 and 15 minutes.  On the JBL website, there are various drivers depending on your OS as well as a firmware upgrade that can be performed.  Having ensured everything was up to date I was at a bit of a loss to be honest when the problem still carried on.  After trawling the internet it appears that this is a common issue and at £150, one that gets really annoying very soon.

On JBL’s website, I did find under Support the mention to “avoid USB splitters and extenders built into screens”.  Having been plugged into a hub I called myself a fool and plugged in directly to the PC.  At first, this seemed to prolong the amount of time it took to turn them off however inevitably it still happened.  I even turned off the power management on the USB ports so that they did not shut down if they are not being used for a period of time.  Weirdly enough the speakers seemed to only turn off when they were being used.  It really is a strange state of affairs.  I did see some people mention that it could be an AMD chipset issue but this has not been verified.

Another issue that came to light was the ability to control the volume.  I don’t know about you but I usually set my speakers to a volume and then just control it from my pc.  Well, from the volume dial on the actual speakers all the way to using any other form of control via windows or gaming keyboards etc., there were times that the speakers either did nothing or just started playing amazing loud.  Although you could see the volume on the screen rising and falling gently in correspondence to your actions, proving that what you were doing was having an effect, the speakers were either all or nothing.  Volume 2 on the windows volume mixer was stupidly loud and the physical dial on the speakers just turned the sound off.  At one point I completely lost audio.  Turning the speakers on and off restored the functionality of the volume dial on the actual speakers however any volume changes in windows using media keys to control the media/game just resulted in the sound levels messing around again.

After contacting tech support a couple of times they dismissed that the speakers were faulty and suggested using the included 3.5mm stereo jack lead instead of the USB.  As soon as I did that the issues that I had went away.  Basically, don’t use the USB lead!

So in summary, the JBL Quantum Duo speakers aesthetically look awesome, especially with the illuminated woofers and sides.  The sound quality is fantastic, as you would expect with JBL.  The number of ways that you can connect to them allows multiple peripherals to push their sound through them.  Every box is ticked for a very well built unit.  However, the frustrations that I had for a long time with the USB cable issue was really annoying and something that you wouldn’t expect to happen.  Ok, the jack leads circumnavigate the problem, but surely everything should just work at the end of the day.  After my experiences with them, they can receive the Thumb Culture Silver Award.