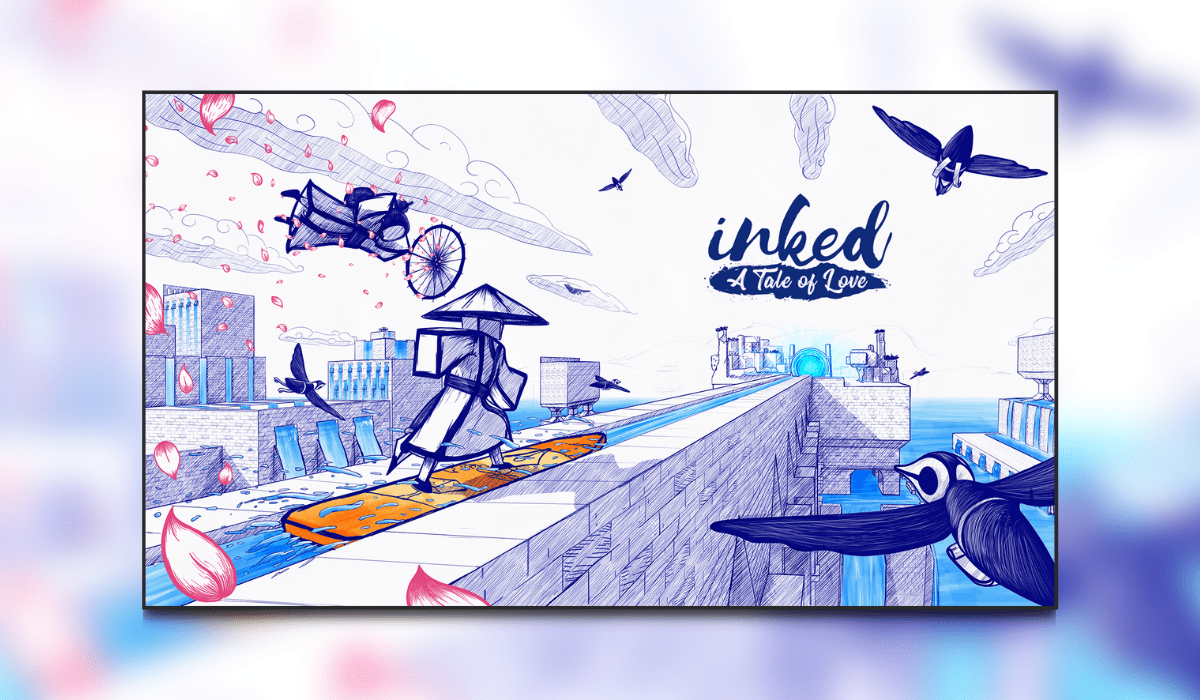 Welcome to my PlayStation review of Inked: A Tale of Love. The game is a puzzle-platform game. It is the debut game from developers Somnium Games who are a small team of artists and programmers. It is published by a couple of publishers, Starbreeze Studios (Payday, Payday 2, Overkills The Walking Dead) for PC and Pixmain (My Time at Portia, Hundred Days) for consoles.

The story in Inked: A Tale of Love is based around love and a rogue samurai who is called Nameless Hero, on his quest for his true love, Aiko. I played the game on the PlayStation 5. The game is available now on PC, PlayStation 4, PlayStation 5, Xbox One, Xbox Series X|S, and Nintendo Switch.

Inked: A Tale of Love Shows That Love Pays Off

Can our hero complete his quest for his love, Aiko? Find out in my review below. If you like this review, please consider reading my previous here where I played Super Arcade Football.

As mentioned, Inked: A Tale of Love is a puzzle game. We take objects from Nameless Hero’s world and place them around allowing him to continue further into his journey. The game is rather basic but how it’s put together and how you move objects around is very well done. For example, you have to move certain blocks around so you can put enough weight on two pressure plates which will then trigger a bridge to open up for you to cross. Some puzzles just involve you doing something a bit easier like pushing or pulling a crate around so you can use this as a final piece of a path for you to continue further.

Most of the puzzles are rather simple but a few definitely had me scratching my head thinking “what the hell do I need to do here?!”. Which is always good in a puzzle game, it’s not fun if you’re just pretty much breezing through all the levels in a puzzle game. One puzzle I thought was cool was where you have to pull a level across a set path with Nameless Hero, and then place a box next to it to stop it automatically moving back to its starting point. You get that tip for free.

As you’re going through the levels, there is a comic book artist named Adam who appears at times. He is the narrator and designer of our world. His hands appear on top of your world and he will doodle some random stuff in the world which is cool to watch. However, these can be aids or obstacles to Nameless Hero. This just adds to the game and when you think you’ve got it nailed down, nope. Not just yet.

As you progress through levels in the game, you will be introduced to “canvases”. These are hidden throughout the chapters and each chapter has a different item painted on the canvases in that chapter. It may be a fish, it may be a samurai warrior, it could even be a bird. Only you will find that out though when you’re progressing through the chapters in Inked: A Tale of Love.

Due to the style of the graphics of giving that feeling of a ballpoint pen on graphing paper, this game feels really unique to me. The art style is incredible and I love what the artists have done. It literally looks like the doodles we used to do as kids when sat in a boring lesson in school.

The music in Inked: A Tale of Love is beautiful. I can’t fault it. The sound effects are pretty damn good too. These satisfy your ears to chill you out, a lot.

Inked: A Tale of Love can last you anywhere up to 6 hours. Naturally, this depends on if you’re looking for the canvases hidden around in the levels, or if you get stuck. As always with PlayStation games, there are a bunch of trophies to be acquired too. Of course, that’s if you want to unlock them. There is a platinum trophy to be unlocked also.

Here are my final thoughts of Inked: A Tale of Love. It is most definitely a great little puzzle game and I enjoyed playing it. The graphics and audio are really good in the game. The only thing was I felt I could only play an hour or so at any one time. Otherwise, I felt as if I was getting bored, even though I was enjoying the game. Of course, this is no fault of the devs or the game itself, it’s just me. I give Inked: A Tale of Love the Thumb Culture Gold Award