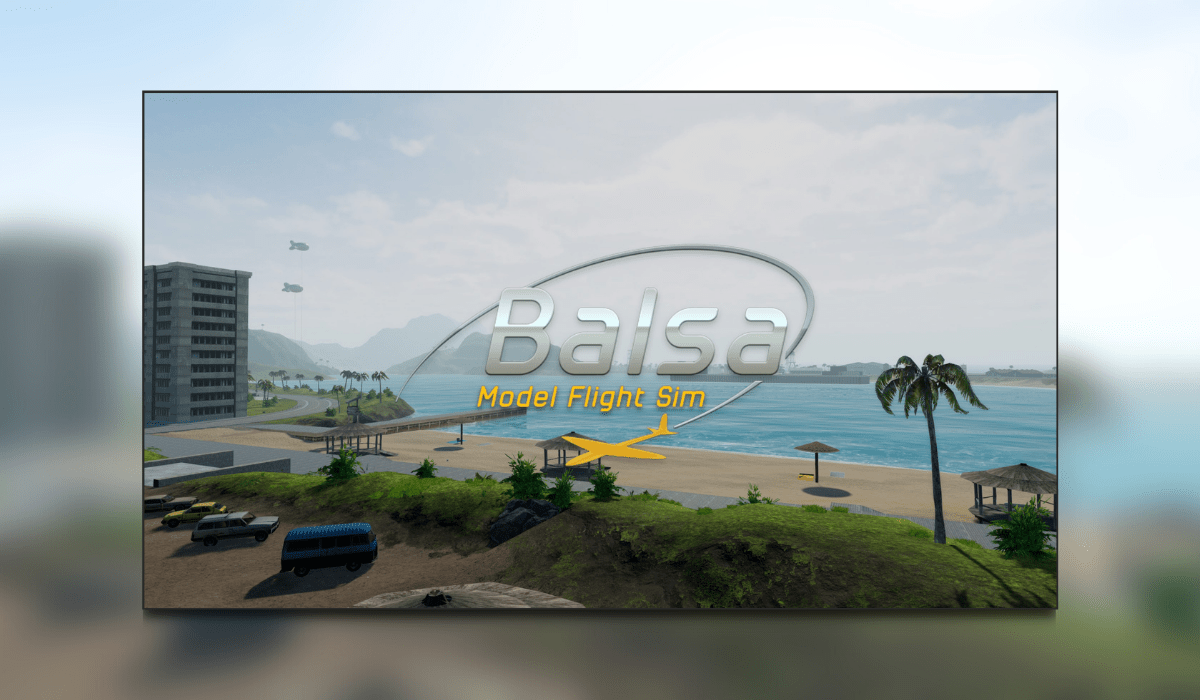 Balsa Model Flight Simulator by Canadian-based devs Floating Origin Interactive is exactly as it sounds.  Simply put it is a flight simulator game that allows you to build and fly your very own balsa wood planes!

Headed by Felipe Falanghe who created the acclaimed Kerbal Space Program, Balsa Model Flight Simulator keeps you in the air but this time on planet Earth.

Ready to test your creative skills and take to the skies? Let’s do this! If you enjoy my review please check out my past articles here!

It is worth pointing out that at the time of review, the game was in early access with a huge caveat that many things may not be functional or work quite correctly.  Indeed there were many features that have not currently been introduced however I could play enough to get a feel for the game.

You will no doubt remember back in crafting lessons at school playing with balsa wood.  It was very lightweight but equally very snappable!  Balsa Model Flight Simulator basically sees you hone in everything you know about wood and physics.  It then allows you to piece together your own aircraft before laughing as your failed attempt smashes into the ground.  Thankfully the trial and error element was not too tedious going!

All of the flying takes place on a large map that contains all manner of environments such as beaches, watercourses, city blocks, hills, and snowy mountains.  Each location can be fast travelled to, allowing a variety of backdrops for you to crash into.

Career mode teaches you the very basics of constructing and flying model aircraft.  It is definitely the first place to go when starting the game for the first time.  By walking around the runway area you can speak to several floating people that offer you lessons and mini-missions to complete.  Each successful flight accrues you some money and XP which is used to unlock new parts and pay for repairs.

Getting used to the workshop takes a little bit of navigation as you are gently spoonfed a few basics, however, to be honest, a lot of it felt more like trial and error.  There are a lot of parts to unlock and thankfully there is a sandbox mode called Build and Fly that allows you to simply go for it should you wish to see what your flying fortress is like with a mini jet engine strapped to it.

Despite the current lack of things to do, the physics of the planes is one of the major features of the game.  Indeed it is quite fun simply connecting parts and modules together in the Workshop.  I found it quite tricky sometimes lining parts up however I did get some success at times with fitting batteries and motors in order to enable powered flight.  There is a massive onus on getting the centre of mass, aerodynamics and of course size of the battery and motor correct.

Once you have a plane you can fully customise it with designs and paint to really make it yours.  Adding weapons is particularly fun, as a loaded paintball gun never gets tiring.

There is a lot of flexibility in Balsa Model Flight Simulator as you can also download blueprints for other planes and very quickly you can accrue a library of other players’ constructions.  From the Crimson Skies Fury aircraft to the weird and wacky there are so many already out there for you to test and mod.

Once you do manage to get into the skies the model aircraft can be really tricky to fly. I tried flying using m+kb as well as gamepad and it was at times really sensitive.  This was to the point that on one mission whereby I was trying to fly through a number of hoops I simply span around in circles like a one-winged nat as I just could not touch the control lightly enough.  There is HOTAS support for the diehard fans of flying.

If flying solo is not your thing then there is a multiplayer section whereby you can join various online lobbies with up to 16 pilots at one time.  Although this was fun, I again showed off my terrible flying skills to everyone as I repeatedly hit the dirt.  It felt like the walk of shame retrieving a hundred pieces of the plane and returning to the workshop for repairs.

There is a Scenarios mode however at the time of writing this was simply a free roam as there are not any missions just yet.

Graphically, Balsa Model Flight Simulator is ok with good detail when in the workshop however do not expect Microsoft Flight Sim by any means.  The textures and scenery are fairly basic renders although to be fair if you are in the air you really don’t want to be seeing them close up for obvious reasons!  Being early access they were a little glitchy at times but nothing game-breaking.

There is upbeat music in the main game menu and in the workshop however nothing when out with your plane.  A bit of Kenny Loggins wouldn’t go amiss although I would probably not get to when the drums kick in.  Beeps and boops are present when navigating pop up screens while the actual flying of the planes brings with it the soaring sounds of the wind along with the mosquito-like buzz of the battery-powered motors.

Balsa Model Flight Simulator is fairly intriguing when it comes to the construction side as there has been a lot of time and effort clearly put into the modules and physics.  Currently, there aren’t lots to do in the game although there is a roadmap to bring in helicopters, VTOL craft, rockets and pretty much anything else they can design.  Eventually, there will be challenges and multiplayer modes to spice things up as well as more maps and mission editors.

Being an engineer I do enjoy the construction of things.  Balsa Model Flight Simulator does tickle the tastebuds however in its current form I don’t think I would necessarily rush out and spend £15 on it.  If you are into your physics and RC aircraft and also enjoy modding then give it a go, I’m sure you will not be disappointed.  There is definitely a large community producing some amazing planes for you to fly.  Going forward I hope that the planned features come to fruition as the game does feel lacking in a few areas due to the early access release.