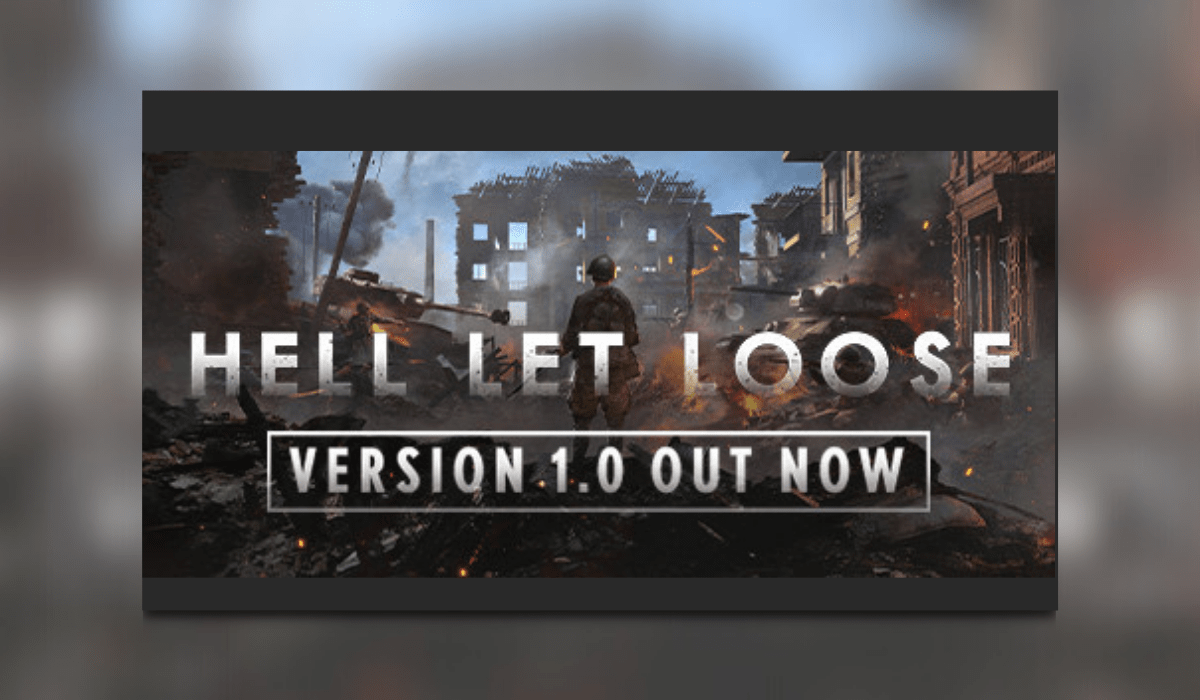 On Tuesday, July 29th Hell Let Loose rolled out of Early Access and into its 1.0 release with its Update 10. A hardcore, first-person shooter set in World War 2, Hell Let Loose is the flagship game of developer Black Matter Studio and published by Team17. It prides itself in being a realistic multiplayer shooter, with open 50 vs 50 battles. These consist of infantry, armour and strategy. There is also a resource-based meta-game. Other titles in the World War 2 setting simply don’t compare to the simulation of war brought forth by Hell Let Loose. Originally developed for PC in Unreal Engine 4 and is available for purchase on Steam. Black Matter Studios has announced plans to port the game to the latest Xbox and PlayStation platforms as well.

PREPARE FOR THE BRUTAL, REALISTIC PAIN OF WAR IN HELL LET LOOSE

Hell Let Loose originally hit the Steam store for Early Access back in June of 2019. I was eager to take a look at a game leaning more toward the Mil-sim genre of realism after many years of factional fps games. Needless to say, I simply had no idea of the unforgiving warfare I was about to partake in! Hell Let Loose was previously reviewed here on Thumb Culture during its late Early Access.

Upon logging into Hell Let Loose, there are six options in the main menu: Enlist, Barracks, Field Manual, Options, Credits, and Quit. The latter three are self-explanatory. Enlist is where you go to get your hands dirty, bring up the list of active servers and saved favourites. The Field Manual menu is the guide for all things Hell Let Loose. Here are the ins and outs such as game modes, objective types, and game mechanics. There are currently two game modes – Warfare or Offensive, basically a tug of war mode vs an offence/defence mode.

Barracks is for customizing the look of your soldier. You can change their head, uniform, and helmet – unlocked via progressing by rank or by role type. This is a major area where Hell Let Loose differs from other mainstream FPS games around: you can’t customize your loadout per se and there are no weapon skins. Each role has two to four loadouts that you can unlock by progressing that individual role. But the loadouts themselves are static with set weapons and equipment.

The main focus in Hell Let Loose is the same as almost any other multiplayer game – complete the objectives for your team. There is no single-player campaign, so no story to dive into here. Hell Let Loose has a pure focus on large-scale, realistic warfare. Everyone plays a role in your faction. Become a rifleman, support, or frontline role with your squad in the trenches. Or be a recon trying to get a look ahead at the next objective or watch for the inevitable flank. There are also armour-oriented roles to play. After progressing to level 10, you can even be the commander. The commander role has its own unique actions to support your faction.

Hell Let Loose has several mechanics that set it apart from other first-person-shooter games. Firstly, when you die there is zero indication whatsoever of who/what/how killed you. There’s also no indication of from where. I found this to be a bit of a point of frustration when attempting to push forward – having no idea where the enemy is. While you are alive there is a minimal indication of where you are hit from. Also no hit markers so it’s not always clear if you got your target. Suppression is also another major mechanic that can have you ducking for cover for longer than most would like. Returning fire is a matter of calculated precision as well, as most of the starter rifles are bolt-action and you rarely get a second shot.

Hell Let Loose is a beauty of a game for being from a fresh studio. The textures and models are all crisp, clean, and as realistic as they can seem to get. I’ll put out there that there are several other games that have gone into early access and even release that have never gotten even close to as eye-catching as this one. With my graphics settings defaulted to “Epic” (with Motion Blur turned OFF of course), I didn’t seem to be having any framerate issues at all beyond a hiccup here or there or having to lower them slightly for streaming. The bloom from a tank blown up not far away from me was gorgeous.

I’m no audiophile, but if you’re not playing Hell Let Loose with some type of headset on – you’re playing it wrong. Being able to hear everything from footsteps to armor/vehicle movement to bullets whizzing by is absolutely essential. It can mean the difference from pressing on to the next objective and having to respawn back at that outpost you just spent the last fifteen minutes crawling forward from. Utilizing the games VoiP system to communicate with your squad mates and other friendlies nearby is also key to victory. Quality communication in this game is necessary and Black Matter Studios has done a great job of including a clear and direct means of doing so.

I can see a lot of time and dedication going into Hell Let Loose for some. A deeper dive into the different classes and strategies is worth examining if you are going to spend any amount of time playing Hell Let Loose. For the strategy buffs out there, this is your jam. I personally won’t be able to spend more than an hour or two playing the game on a weekly basis. I hope to eventually spend more time looking for the enemy and less looking at my KIA screen.

Overall, Hell Let Loose is a refreshing change of pace for those looking for more of a hardcore, tactical game. It seems to follow along similar games such as Arma 3’s multiplayer and Squad. There are some unique gameplay mechanics, refreshing graphics, and built-in voice comms to boot. If you can handle the unforgiving deadly warfare of a realistic World War 2 shooter, this is the game for you.

Also of note, the community for Hell Let Loose seems to be already on the way to an amazing future. It is welcoming and helpful toward new players. Among various how-to guides on YouTube, several members of the community also have created a New Player Guide for anyone looking to dive in.