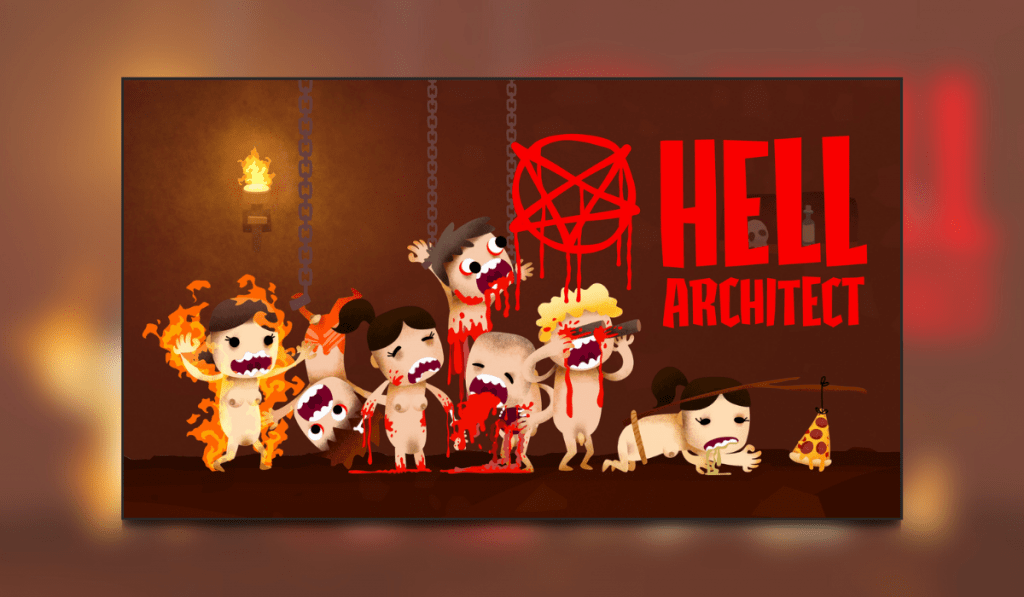 We previously got a first look at Hell Architect during its early access/preview stage. Woodland Games have now fully released Hell Architect on Steam. Originally pitched in a Kickstarter Campaign, we take a closer look at the full release version published by Play Way & Leonardo Interactive.

YOU ARE IN MY HELL NOW!

If you checked out Dan’s preview of Hell Architect then you will know what to expect and this sparked my interest. So let’s check out the full release version of Hell Architect and create our own living hell for the sinners that may enter! Let us know in the comments if you have checked out Hell Architect. And if so, what you enjoyed, we will be intrigued to find out.

The gameplay focuses solely on building and managing your very own hell. Built by Woodland Games, Hell Architect is essentially a city builder and you start life as a new employee who is trying to get the most work you can out of the various “sinners” you have at your disposal. With various tasks and challenges to complete, there is a ridiculous amount of demonic fun to be had. The mechanics with Hell Architect‘s gameplay are very vast. There are three main parts to the game, sinners, materials, and construction.

Sinners are little “workers” as you will. They go about completing your tasks, and you initially start with four. If you decide to kill one of your Sinners, you will see a “Time to Next Sinner” under Hells Doorway. You can order your sinners to mine for materials, perform general tasks such as food and water, work on construction, or you can torture them in order to produce extra materials. All of your Sinners have different attributes, so it is worth checking before assigning one to complete a random torture act or task per se.

Your basic materials are metal, dirt, and coal which are gathered by basic mining and used in every part of the construction. You are handed blueprints at the start, along with some knowledge on making food, suffering, and providing water. Towards the end, the roles of most structures will change and expand.

As for construction, you do get some goodies to embark on your torture. The first basic construction method is building tunnels, these also provide you with dirt but are a good way to go about setting up torture chambers and general pathways. With copious amounts of ways of torturing your sinners from devilish jacuzzi’s to inferno fire pits. There is so much fun to be had. You can also build toilets for drinking water (I know), troughs for food stations and cardboard beds. Comfort in your own hell is obviously key!

If you are not happy with anything, don’t panic, there is a deconstruct button to remove items. I would advise, with any form of city builder that planning is key, especially with Hell Architect. I enjoyed all the components of the gameplay, and the game ran really well.  As a little extra, From time to time, you will get Legendary Sinners. And you will chuckle when you come across them.

The graphics are ace, I loved the cartoonish art direction, but more so, I think the satanic symbols and graffiti around the door just look awesome. The game looked beautiful on high settings with really stand-out reds and overall looks very well designed.  When playing, I did notice a few frame drops but nothing that swayed my opinion.

I must admit, I enjoyed the 2D art style, It sort of makes sense for the game to be 2D. Also, I believe having the game 3D and moving around a large vast world would be too cumbersome.

I did really enjoy the soundtrack. It certainly brought a hellish aesthetic and most definitely helped in creating a dark dungeonesque hell. The sound effects brought the game together in many ways. I have to admit, that sometimes, they were questionable. However, they certainly made me laugh, but they made the game even more fun.

The game comes with various scenarios you can play and sandbox mode. Sandbox is the base game for which you can play around with the settings of the game and build. With this alone, you can definitely pack on the hours with this. Getting lost in your own hell is a lot easier than I first thought!

Whereas scenarios, as the name suggests, will put you into a story mode and you have to complete tasks along the way. I would recommend doing the tutorials before doing anything, this helped me understand the mechanics and obviously the basics. But more so, this is where you get introduced to your guide when going into the story. You can definitely pack on the hours with this.

If you enjoy city builders, always dreamt as a kid having your own hell, bludgeoning people for suffering in an iron maiden then this is for you! Besides all of that, I would generally recommend this game to anyone. It is fun, full of different things to do and enjoy. Also, Woodland Games has plans on bringing in new content to the game soon, after squashing some bugs. The roadmap could be never-ending bringing a wealth of new content over the years. I give Hell Architect a Thumb Culture Platinum Award, it is awesome!